Nothing is good about rape. It leaves victims in horrible psychological states. Even when the outward effects, such as bruises are healed, inwardly, only the victim can gauge the level of damage from which he or she suffers continuously . Knowing how deeply traumatizing rape is to people who have experienced it, and the possibility that they would painfully relive the experience when viewed on television, is it necessary for Outlander to portray that act so realistically? Will minimizing the harshness of the perpetrator and the suffering of the victim be better for viewers? Or will narrating the story as opposed to showing the gruesome act be best?

Season 1, episode 116 entitled “To Ransom a Man’s Soul” was arguably one of the most talked about episodes on television in 2015 for obvious reasons. Jamie suffered a cruel sexual assault from Black Jack Randall and STARZ showed as much as possible. I remember watching -yet not actually watching because I closed my eyes more than I opened them during those brutal and extended flashback scenes.

I wasn’t the only one.

That episode garnered a lot of praise for the actors’ portrayals as well as rebuke of the show for the graphic nature of the assault. On one hand, it was a cinematic milestone for the show.  It managed to stay true to the realistic nature of the crime, which was relevant to the story. On the other hand, it was too intense for some people to view, let alone someone who has survived a sexual assault. 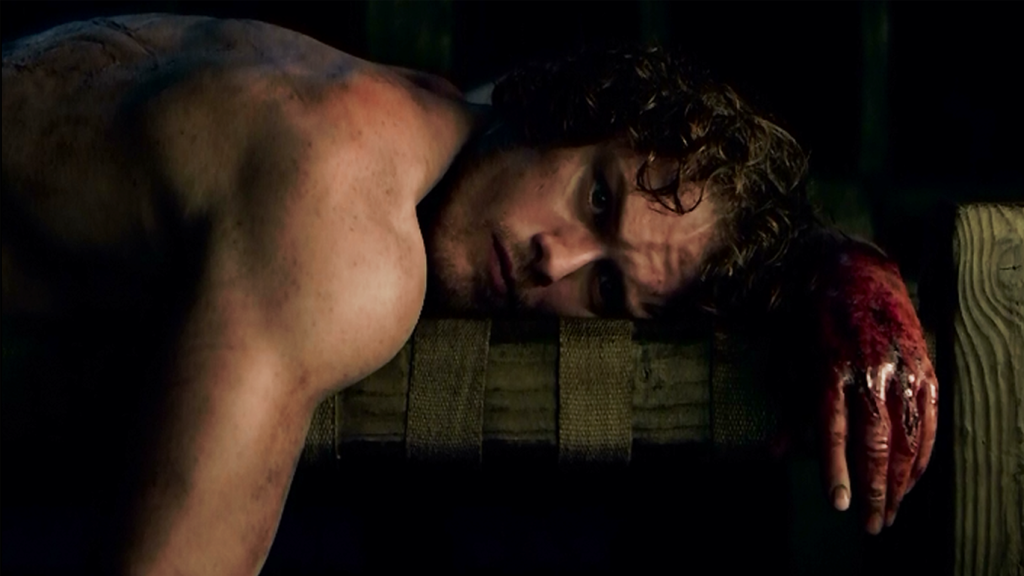 Of course, one may argue that this depiction makes for great television.  Outlander is often compared with Game of Thrones, which doesn’t shy away from showing sex and brutality. The wonderful thing about Outlander is that the show doesn’t glorify meaningless sex and brutality for the sake of it. The show examines the individual’s emotional damage as well as how loved ones peripheral to the individual are affected. For example, in season 2, Jamie continues to struggle with traumatic episodes both awake and asleep as a result of his devastating assault. Claire tries to help him, but can only do so if he confides in her.  Jamie’s struggle is more understandable after watching the extent of the abuse from episode 116. Would Jamie’s traumatizing struggle in season 2 be as believable as it is if those scenes weren’t shown in such a graphic way?

Maybe so, may be not.

Perhaps Sam Heughan would’ve had to fight much more of an uphill battle in terms of his performance in the early episodes of season 2, had the season 1 finale not painted such a horrific picture. These scenes were vital to the story and raised Black Jack Randall’s villain status. We needed to see Jamie, always so strong and vital, utterly broken.

We also witnessed the limits to Claire’s medical skills since Jamie now needed more than her herbal knowledge. Maybe these scenes could have been censored a bit to the level that one didn’t have to flinch at every second. Maybe doing so would have caused the them to lose their intended impact and originality. What we know is that the actors were willing to go to those dark places, it was well cut and edited and ultimately, STARZ gave it their seal of approval. 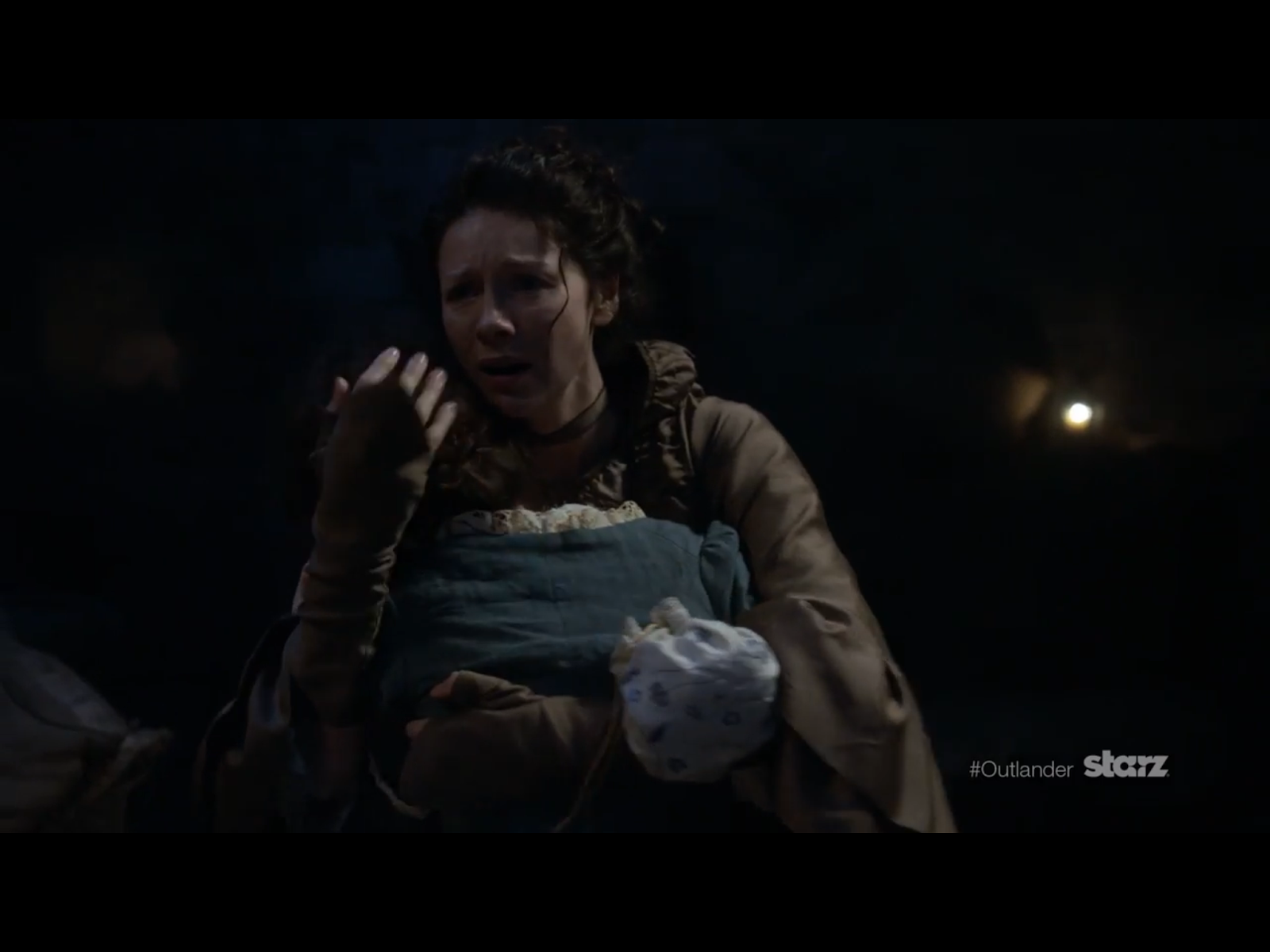 Fast forward to season 2, episode 204 and we see Mary Hawkins raped in an alley. We watch this sweet girl robbed of her innocence in a time when violated women were considered ruined. Granted, Mary Hawkins’ assault was not as stomach-wrenching as Jamie’s but it was still horrible to watch because rape is always terrible, no matter the context.  We were treated to weeks of build-up, cementing the fragile doll-like quality of Mary to make the assault that much more of a sucker-punch. Yet even so, a friend confided to me that this scene was much easier to stomach.  I agreed with her, but pointed out that it was just as relevant to the story as ‘To Ransom a Man’s Soul’ had been.

Rape, as presented in film and television, should never be something to be viewed without flinching, and if it doesn’t phase you, perhaps that’s something you may want to examine. With this in mind, Outlander got the right reaction when people found episode 116 hard to stomach. We had formed a connection with Jamie, many of us years before Sam’s portrayal was even a glimmer on the horizon, so we should have felt almost a physical sense of discomfort when that was happening to him.  I know I did. Since Mary Hawkins’ assault was also upsetting, maybe Outlander didn’t have to go as far as they did with Jamie’s to get the reaction they wanted from viewers.

Viewers should be able to recognize rape as any instance where there is a lack of consent.  It doesn’t have to be particularly “violent” to qualify . . . a point to keep in mind as we head into season 3.  Yet this idea . . . that rape IS always clearly violent and easily discernible, has permeated film and television’s view of assault almost exclusively.

What happens when lack of consent isn’t so clear?  What happens when the victims are silenced from crying out by the societal norms which surround them?  And, if we are telling stories realistically, should we not explore those grey areas as well? 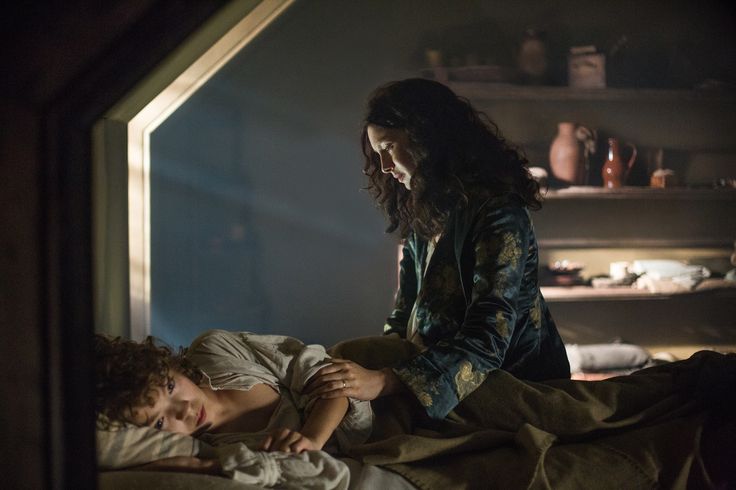 This brings us to episode 207, Faith, and the re-imagining of Fergus’ assault.  What we are presented with is a clear lack of consent.  I won’t delve into the show’s depiction of child rape here, since this has been discussed ad-nauseum on the Outlander Cast Podcast as well as in the Clan Gathering Facebook group, but what we should look at is the clear distrust the creative team shows us in changing the very nature of Fergus’ assault.

Book readers know that Fergus was sometimes offered to patrons of Madam Elise whose predilections lay outside the norm.  When Fergus had his encounter with Black Jack in the text, there was initially tentative consent, and (for what it’s worth) if a child is even capable of offering consent.

As most of us would agree, consent is something which can be withdrawn at any time.  When the encounter turns violent, Fergus withdraws his consent and it becomes a sexual assault.  Despite this shift in consent, there have been many book readers who maintain that the scene in the book is not rape.  Withdrawn consent is something which is seldom explored, yet is a major real-world problem, silencing assault survivors through victim shaming.  If Outlander wants to really push the envelop, perhaps they missed the boat.  They have the opportunity to address it in season 3, but I’d lay pretty solid odds against them even trying.

Yes, Outlander would be better off showing relevant scenes that would enhance the story as season one’s graphic assault is now supporting season two’s story line. Scenes like those depicting sexual assault do not have to be overly-graphic for viewers to understand how horrendous they are (I didn’t have to see some of the things that Black Jack did to Jamie. His scream was enough). It is understandable that as the story was told from Jamie’s point of view, they had to amplify the assault, which gave those who were familiar with the book a different view. Speaking of fans of Outlander, most of us appreciate how far the creator, directors, and producers go to make the story fresh to those who’ve read the book. While I like that the pivotal story lines are portrayed well, some things are best left to the imagination.

What are your thoughts?  Did they go too far?  Should Outlander be trying to openly explore the nature of consent, given the ubiquitous nature of sexual assault throughout the series?