Forget-me-not: Outlander’s Powerful Use of Flowers to Tell Stories

It’s summer, the heat index is unapologetic, and we’re in the very real throes of Droughtlander. What’s an Outlander-obsessed gal to do but hibernate indoors and commit to re-watching every episode. . . again? I just hope my DVDs don’t melt in the player from overuse.

On one of my many viewings, my mind began to focus on one of the small, easy-to-gloss-over story elements I’d missed earlier – flowers. Such small, but powerful vital story elements that deserve their time in the sun. What specifically caught my eye was the one that started it all – the forget-me-not. Claire noticed them in the very first episode, the first day she and Frank visited Craigh Na Dun, but wasn’t sure of their identity. She goes back to the stones to collect some and, well, we all know what happens next. Wow. What a powerful flower! But what of the forget-me-not itself? Does it have a story of its own to tell?

Legend has it that in medieval times, a knight and his lady were walking along the side of a river. The knight gathered some flowers for her, but lost his balance due to the weight of his armor and fell into the river. As he was drowning, he threw the flowers to her, saying, “Forget me not!”

Just as the knight fell into the river, Claire fell through time. Perhaps there’s a reason these little powerhouses thrive atop the Craigh Na Dun hillside, their vibrant blue color deeply associated with remembrance and memory. The very name “forget me not” means remembrance. Are they telling Claire that she mustn’t forget Frank? Or her twentieth century life?
Possibly, and she doesn’t. Claire wants to ensure Frank’s existence and takes measures to ensure his family tree remains intact (at great personal cost to herself and others, as we witness many times throughout the first two seasons). Her life with Frank needs to be remembered, because we know all too well that Claire’s fate is to eventually return (albeit, reluctantly) through the stones to save herself and Jamie’s unborn child. But this little flower has an even bigger story to tell. 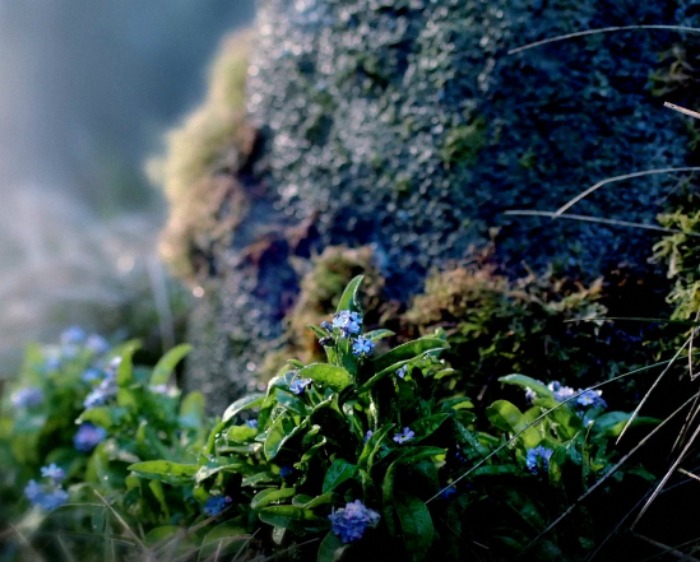 Jamie is the love of Claire’s life, and here’s where the meaning of the forget-me-not truly shines. My informal research found phrases such as “true and undying love”, “a connection that lasts through time”, and “fidelity and loyalty in a relationship, despite separation or other challenges.” Wow. If that doesn’t describe Jamie and Claire’s story to a tee then I don’t know what does. One more – “remembrance during partings or after death” – played out in the finale of season two when Claire returned to Scotland after Frank’s death. She’s certain Jamie is dead, but can’t help visiting the places that connected them in life – Lallybroch, Culloden – and she finds herself immersed in research, trying to find out what happened to Jamie. Will we see the little blue flowers on Craigh Na Dun when Claire returns to find Jamie, now that she knows he survived the Battle at Culloden?

While we ponder that, let’s go back to season one for a bit. Wee Lindsay Macneill (the son of Colum’s chambermaid) died after venturing to the Black Kirk with Mrs. Fitzgibbon’s nephew, Tammas Baxter, and ingesting what they thought was wood garlic. Tammas falls ill shortly after Lindsay’s death, but people think he’s possessed by demons, and not actually ill. Claire wants to help if she can, and persuades Jamie to take her to the Black Kirk so she can look around. 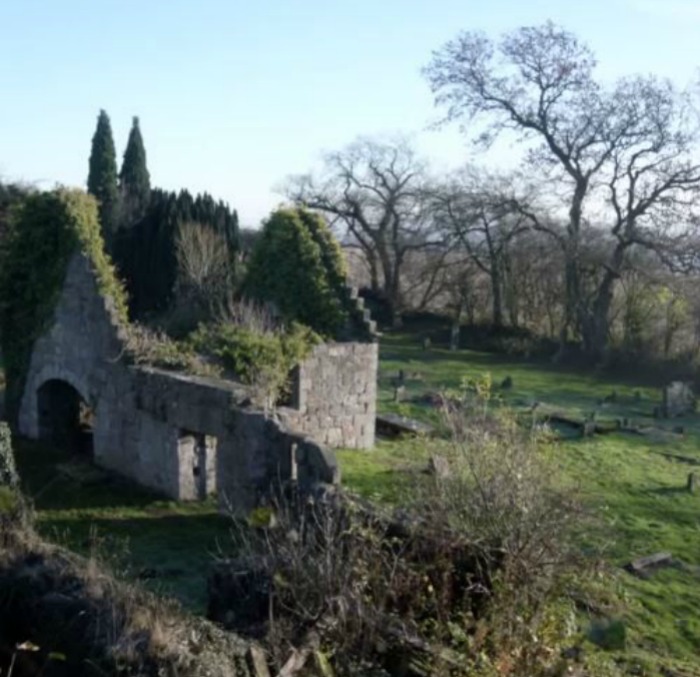 Claire and Jamie have a wonderful exchange, getting to know each other a bit, and Jamie tells Claire what he used to do when he would visit the Black Kirk as a young boy. Besides climbing the walls, pissing on the stones (in defiance of the devil), sometimes they’d find berries or wood garlic to eat. He says he didn’t care much for the taste and shows it to Claire, who recognizes it immediately as lily-of-the-valley. 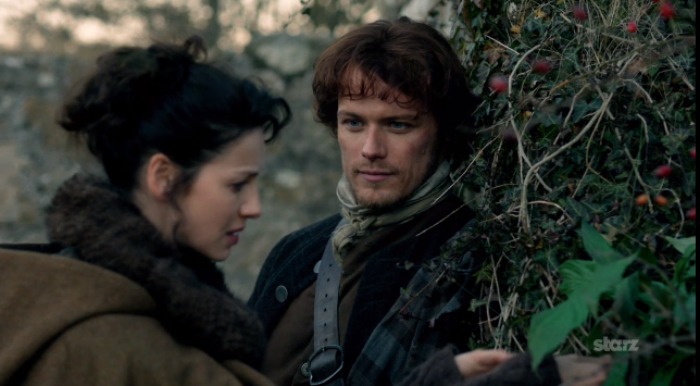 This potent little plant reveals more than its poisonous nature. Claire asks Jamie if the monastery was built by monks from Germany. When Jamie gives her a puzzled look, she quickly searches her memory for the name based on the time, shakes her head in correction, and says, “Prussia.” I wonder what Claire would have said if Jamie had asked her where Germany was. . . he is an educated man, after all. Nonetheless, she dodged a bullet there.
Claire hopes she can save Tammas if she can get to him in time. That means convincing Mrs. Fitz and facing down the imposing Father Bain, who accuses her of “spouting blasphemy.” Claire gives Tammas a decoction of belladonna, which saves him and earns her the title of “miracle worker”, according to Mrs. Fitz.
The poisonous little flower has earned Claire a measure of respect, but it comes at a price. She’s on Father Bain’s bad side (what woman isn’t?) and it has made her release by Colum less likely now that the “miracle” she’s performed is being proclaimed far and wide (one of the flower’s symbolic meanings is “return to happiness”). How will Claire get back to the stones, now that Colum will want to keep her on as healer at Castle Leoch? All of this drama from one little flower, growing in a kirk yard. 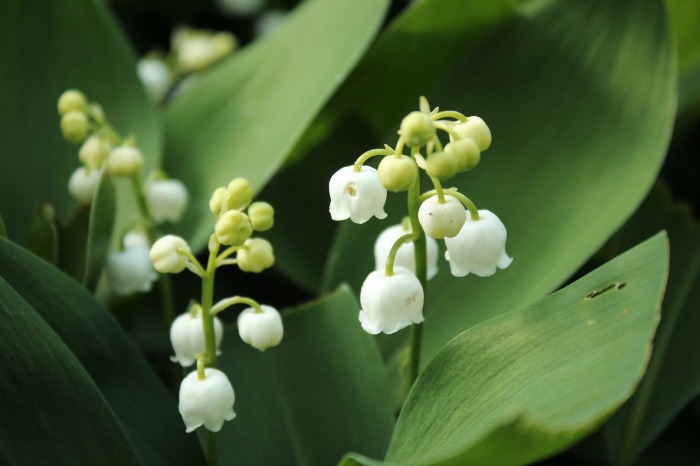 Let’s take one last flower-fueled journey back to season two, in the heart-wrenching “Faith.” Claire lost the daughter she was carrying and Jamie is locked up in the Bastille for dueling with Black Jack Randall. After weeks in the hospital, Fergus visits and begs her to come home and we see them arrive at Jared’s apartment. The carriage door opens, and Fergus is the first to exit, holding a very powerful symbol in his hand – a bouquet of blue anemones. 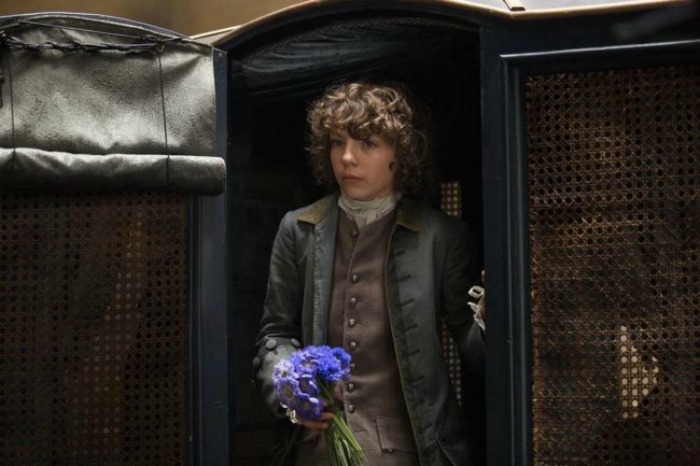 They’re not a casual prop, just something nice for Fergus to hold in his hand as a gift to Claire. The word “anemone” comes from the Greek word meaning, “the wind’s daughter.” Baby Faith is gone from the earthly world, but does her memory float on the wind? Anemones symbolize the death of a loved one or the loss of them to someone else. The dual meaning is a poignant reminder to Claire – she’s lost her daughter, but she’s also lost Jamie – to the Bastille.

The symbolic meaning of anemones includes forsaken love. Jamie broke his promise to Claire to not harm Jack Randall for a year, giving Frank’s ancestor time to be conceived. This leads to Claire feeling Jamie has forsaken her by breaking his promise to her, for not being at her side when she lost their baby, and not being at Jared’s when she finally leaves the hospital. 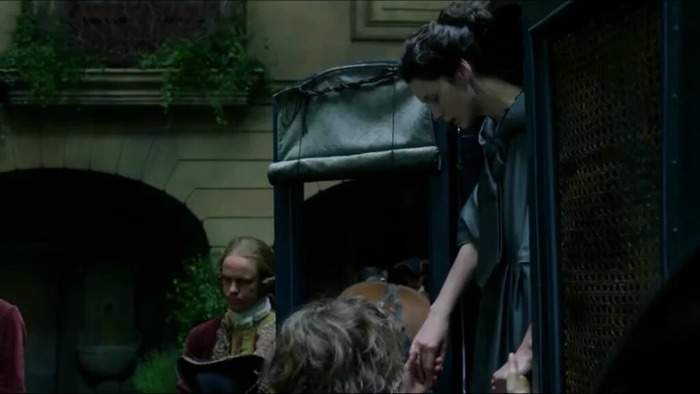 But it’s not all sorrow for the anemone. By the sheer nature of it alone, the flower’s blooming patterns perfectly epitomize Jamie and Claire’s story – closing up at night and opening up in the morning, powerfully symbolizing anticipation for something soon to arrive. This emblem of sadness and mourning also provides a feeling of hope and sense of purpose and renewal in Claire and Jamie’s lives. Claire and Jamie’s reconciliation and ability to move forward together is proof perfect, much like the use of flower imagery in the show. 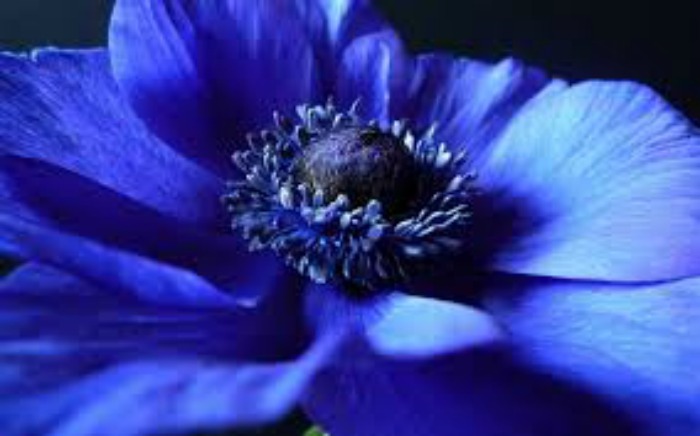