The first episode of Outlander Season 3 is over, and as we all hit rewatch (raise your hand if you rewatched almost immediately after the last credit rolled), lots of us all also began speculating about what that first episode would mean for the rest of the season. Which scenes from the book would make it in? How much time would we need to spend in Boston seeing Frank and Claire’s lives devolve? Etc. Etc. Etc. Inquiring minds want to know.

To help with the pondering, my blogging colleague Holly Richter-White and I decided to take a look at the first half of the season to see what hints we can glean from the episode titles and the directors. The promising news is that Ron D. Moore and Maril Davis not only sought out more representation from women, but also from around the globe. The three directors of Episodes 1-6 represent Australia, the US and Canada, and are some pretty impressive award winners/nominees.

Here’s a look at the directors and what Holly, who is also a screenwriter, thinks we might expect from them. I’m giving my best guess about the episodes themselves.

It’s a small world. As it turns out, my mentor and screenwriting teacher worked as a writer for Beastmaster, where Brendan directed a few episodes. Brendan already had a good relationship with STARZ through Spartacus. But he also has directed numerous war-related TV and mini-series, even winning awards in Australia.

According to Sam Heughan, “Cullodon is colossal. It was like being in a war movie. In a sort of second World War movie. It was great fun. It’s probably the biggest action thing we’ve done.”

Maher’s ability to capture the skirmishes at Culloden as well as the bleakness of the outcome (1700s and 1900s) will play well into the tone set for the first half of the season. A look at how Maher talked about the TV movie Kidnapped, which he also directed, provides more hints of his likely approach in upcoming episodes. “I want the audience to get involved in a really fantastic and exciting adventure story….Hopefully they are struck by the beauty of it and also struck by its bigger historical context. I think they will be transported. They’ll be taken somewhere else.” 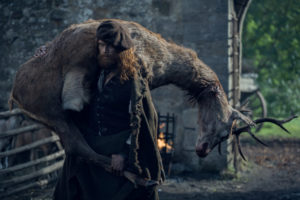 Caveman Jamie helping to provide for his Lallybroch family.

Of the finale of the popular series MadMen, where she was both a director and script supervisor, Getzinger said this: “I love the simple things—like when Bruce brings flowers to Joan. We just had this two-shot, and I remember moving it around and trying different things. I just love the simplicity of the way it ends. You feel the office moving around her, left with these flowers. It’s her in her element. I feel like some of the best moments on Mad Men are the smaller ones.”

She directed the Mad Men “The Suitcase” episode? Wow! That was my first thought upon researching Getzinger.
She’s also directed episodes of Law and Order and How to Get Away With Murder, among many others. Script supervision-skills transitioned her well into directing.

But, her ability to use light and dialogue-free action was what drew me into THAT Mad Men episode, and I see now why she was picked for Outlander Season 3 Episode 2. This will be cave Jamie. Ever-mourning Claire. Grief displayed on faces, meaning everything.

Of course, her two Directors Guild of America nominations and Lotte Verbeek’s recommendation (Getzinger directed her in Agent Carter) probably played a role in her selection by the showrunner and producers.
Plus, she’s a woman. And Outlander (thank you Maril Davis!) clearly responded to its fans demands for MORE WOMEN DIRECTORS!

Bailey received the most coveted assignment of all! THE PRINTSHOP SCENE! No pressure there.
Norma Bailey? Where have I heard that name before? Ah yes, not only does she promote other women directing through a Canadian apprenticeship, but she directed one of the Cannes-jury winning, National Film Board of Canada films I remember from my youth. She won a Cannes award with her first-ever short film, The Performer.

Bailey’s career is long and varied with over 30-plus years in film and TV. She’s done Murdoch Mysteries, Heartland, and now Reign (“set in Scotland” but actually filmed at the estate near Toronto where my sister was married). That Reign connection may be part of how she got the Outlander directing gig. Shannon Goss, who is a current Outlander producer and episode writer, also produced episodes of Reign and may have advocated on Bailey’s behalf.

According to Norma, “Women see the world differently than men and that’s neither good nor bad. But unless you have that balance, you don’t understand the world properly.” I for one can’t wait to see these amazing episodes through her eyes.

With the breadth and depth of their directorial experience, I think we’re in good hands, fans.

On to the episode titles and what they might mean in terms of plot…which is, as they say, thickening. Be warned: Spoilers ahead if you haven’t read the books…. 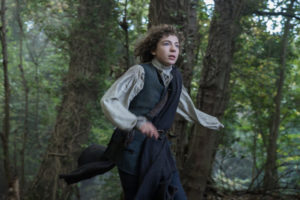 The photos of Caveman Jamie have already hit the interwebs so it’s likely this episode will be a series of emotional and literal surrenders. As Jamie is brought reluctantly back to life by Jenny, it will become clear that he’s still a danger to his family. Who wouldn’t want to be the Redcoat to capture Red Jamie? So he grows his hair, dons his bonnet to hide his red hair, giving rise to the #Dunbonnet moniker, and lives in a cave, only occasionally visiting his family. I’m anticipating lots of sadness and melancholy here as Jamie surrenders to the reality of his new post-Claire world. I also think this is the episode in which Jamie will surrender to the Redcoats to protect his family further and get them the reward money after Fergus suffers a debilitating injury while trying to protect Jamie.

Claire, meanwhile, will have her own surrender, albeit a slightly happier one because she has Brianna, Jamie come to life. She is surrendering the powerful woman she once was, however, to become a stay-at-home mom with a fairly restricted life. It is a partnership that may have some upsides but it is also one that is not the more equal one she had with Jamie. She is surrendering the idea that true love will ever return to her.

Kenney wrote “The Wedding” in Outlander Season 1, among others, so I’m anticipating this will be insightful and well done.

Episode 3: “All Debts Paid,” written by Matt B. Roberts

If Jamie is, indeed, imprisoned in episode 2, this episode will see him at Ardsmuir and introduce Lord John Grey. Theirs is a complicated relationship, as has already been made clear in “The Battle Joine” where the loose ends between the young Grey Jamie lets go and Lord Melton, Grey’s older brother. Now they meet in person. The Ardsmuir part of this episode may end with Grey saving Jamie from being transported to the American colony and setting him up at Helwater instead, a move meant to finalize the debt of honor but one that, ultimately, creates other, shall we say, complications.

Roberts has written some of the best episodes in Outlander IMHO (“The Reckoning”) so I’m pumped to see what he does here.

So many lost things in this book—love, identity, reasons for living, to name just a very few. I’m thinking this episode will focus on 1968 Claire, Brianna and Roger trying to find the ultimate lost thing—Jamie. Did he really survive Culloden? And if so, can Claire leave Brianna and travel back to find Jamie? In either this episode or the next one I think we’ll see the final big fight between Claire and Frank and his ultimate demise. It would be yet another “lost thing” and, going with the title of the next episode, ultimately a “freedom” for Claire to go back to Jamie…so I’m hedging my bets and noting the option in either episode.

Meanwhile, back at Helwater, Jamie is going to get involved with Lady…..and learn he has a son, who he is ultimately going to have to give up because of the obvious parentage similarities that arise as wee William begins to grow up. Yet another loss for Jamie.

Graphia wrote “Faith” and “The Devil’s Mark” so enough said about what we can hope for here.

This is likely the episode where Jamie heads to Edingburgh to become a printer, with a little side gig of smuggling whisky. We might meet Mr. Willoughby here, the Chinaman Jamie rescues/takes on as a side project who ends up causing him no end of grief. He literally can’t hold his whisky and gets into trouble as a result of that.

In Boston, this episode could feature a lot of Brianna, Roger and Claire seeking the final proof that Jamie could actually be alive still, which will obviously open up the freedom for Claire to go back. And we’ll see Claire prepping herself and Brianna for the big move. 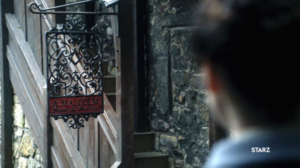 Episode 6: “A. Malcolm,” written by Matt B. Roberts

THE PRINT SHOP. That is all.

This episode will likely feature the print shop burning and young and old Ian in town as well as the smuggling fiasco, which includes our Mr. Willoughby and a murder that needs to be hidden in a lovely cask of creme de menthe. The stramash between Ian, Jamie and young Ian sets up for a potentially fraught return to Lallybroch, which will likely happen in the next episode.

The writer, Karen Campbell, is a newbie to the Outlander family so this will be her test episode.

First Wife is what Mr. Willoughby calls Claire and, in retrospect, that should have been a BIG CLUE to me that perhaps there was another wife somewhere we didn’t know about. It completely went past me the first time I read the books. At any rate, I think we can say with a fair amount of certainty that this is the episode in which Jamie and Claire return to Lallybroch and Leghair rears her unwelcome face. It is a moment in the book where I wanted to shake Jenny for even suggesting this concept. Not surprisingly, things don’t go well, with Jamie ultimately getting shot.

I will also say, however, that in the book, this chapter also brings Jamie and Claire closer together and makes them realize that they really are the only people for each other forever. I felt it was the ultimate commitment moment for them in the book. I’m hoping hoping hoping that is the way it’s handled in the episode.

I would feel a little more confident if this episode had been written by a writer with an Outlander track record. Blake is new the Outlander writing family. Much of her TV writing has been for Ghost Whisperer, a show I don’t know. So fingers crossed all around she does not make this Leghair thing more of an issue for Jamie and Claire than it should be.

So there we have it. A look at the first half of the Outlander episode titles & directors. What do you think of our ideas? Do you have some thoughts about what certain episodes will include?