My Goats Need Grass! An Interview with Outlander’s Goat Lady

Outlander’s “goat lady” plays a critical role in Season 3. We chat with Chanelle de Jager, the actress who brought Annekje Johansen to life.

My goats need grass! has become a bit of an Outlander Cast joke, but we were beaten to it by several months—apparently it became the Cape Town crew’s slogan, too. This according to the delightful Chanelle de Jager, who plays Annekje Johansen and who took time out from setting up a studio shoot to chat with me over the phone. She not only knows how to wrangle goats and act, but she has her own casting agency, runs Actors Toolbox workshops, is a scriptwriter, movie director, voice-over artist, movie, theatre and TV actress, plays the guitar, sings, and is a puppeteer. This is one multi-talented woman. No wonder she and Claire/Caitriona got to be such good friends. 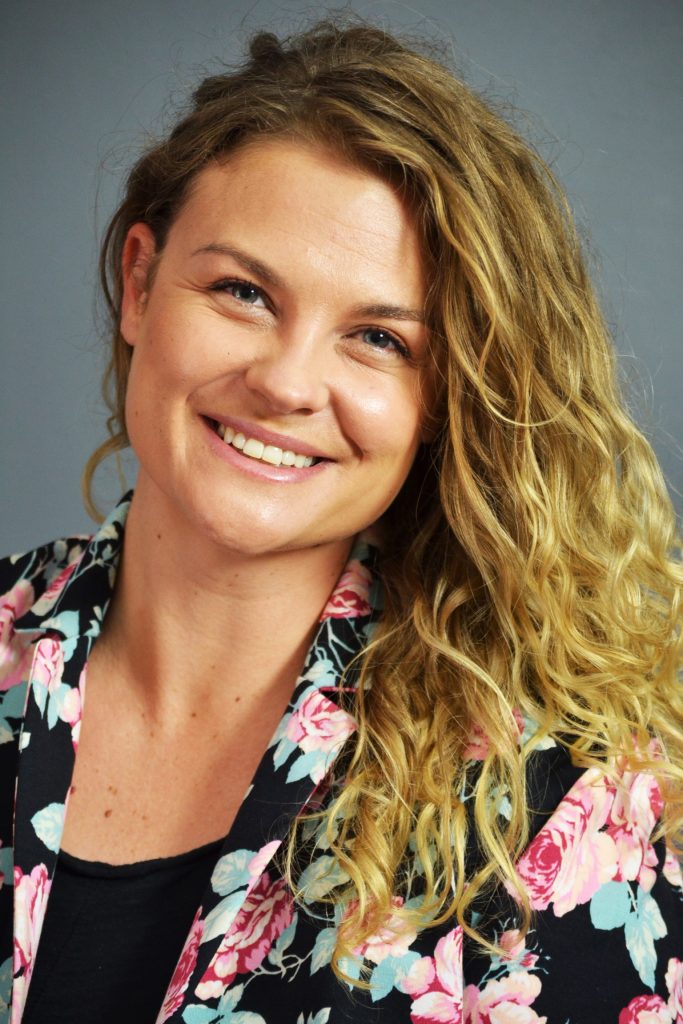 Chanelle admits she knew nothing about Outlander when she auditioned for Annekje at her agent’s suggestion. She hadn’t heard of the books or the TV series, and says she also had no idea Outlander was so popular, let alone in South Africa. She also said to me it was one of the best experiences of her life. (We can believe that I’m sure.)

Her audition call gave her 24 hours to prepare, and then it was into the casting room. Fortunately for Chanelle, she knew the two local people involved so it was less stressful than it might have been, especially considering she’d boned up on Swedish accents the night before— Thank you Google and the internet! Her advantage was that she is Afrikaans speaking, so the guttural g’s and rolling r’s come naturally. The fact that Annekje’s English is so broken was actually another advantage.

Chanelle didn’t get a callback and it took a couple of weeks before she heard the good news that she had gotten the role, as casting decisions have to be okayed by the director, production company and Sony as the network. Then it was a bit of frantic schedule tweaking to free up the four weeks she would need to be on set. The production worked in week-long blocks and all cast members are expected to be on call for that entire time as schedules can change rapidly due to a myriad of factors.

A couple of those weeks were needed for preparation with hair, costumes, make-up and rehearsals. The first meeting for a script reading was held at Spier Wine Estate (Nice!!) where Chanelle was led out to find a long, long table set up with all the producers, directors, production staff and cast members (including Sam Heughan and Caitriona Balfe, of course). It was rather daunting to sit down with this international crew. The reading got underway and then it was Chanelle’s turn. “I spoke with the heavy Swedish accent and broken English, and the whole table burst out laughing!” She was mortified at first, but then realised it was genuine laughter and they just loved her characterisation of Annekje. And that’s when the “my goats need grass” started to become an onset joke. 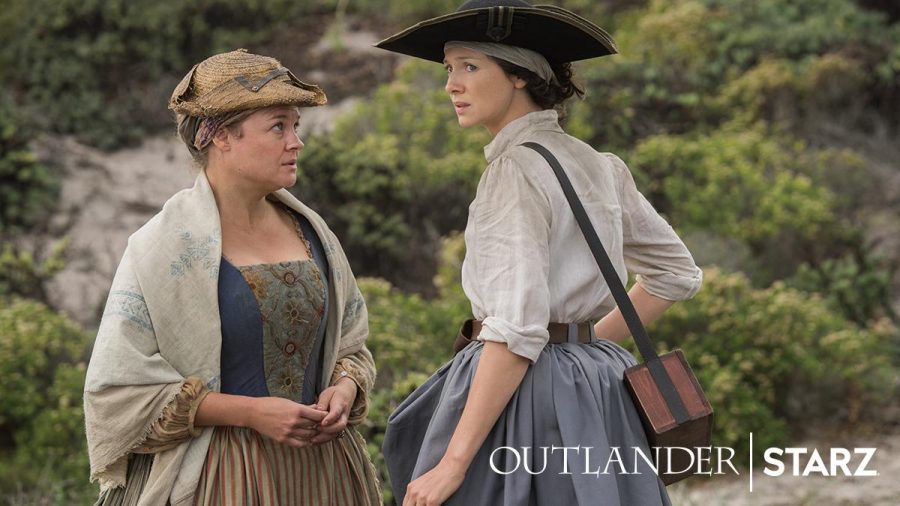 On the island at last.

Chanelle has worked in the industry for 20 years, including a stint in the UK when she starred in Judge John Deed, a couple of seasons on South Africa’s longest running and most popular soapie Egoli as Des du Pont, lots of TV adverts, and a number of local movies. She has never been treated like she was for Outlander, though. “I had my own trailer and assistant,” she says. “They would send the golf cart round to take me off to make-up or wardrobe or down to the ship. The smallest details were attended to.” It made me think about Roger changing into his kilt at the Highland Games he attended with Bree (Book readers will know what I mean.)

Over three days, the hairdressers coloured and dyed her hair until they got the exact shade of Swedish blonde they wanted—and then no one ever got to see it because she wore a headscarf and hat most of the time. At the end of the four weeks, they returned her hair to its natural colour. The costume received even more attention to detail. The corset was made from scratch to fit her specifically. Thankfully she didn’t have to wear a bum roll—“I’ve got a natural one of those,” she jokes.  (Jamie would approve as he likes a nice round bum).

The costume included four layered skirts and petticoats that were incredibly heavy to wear. Here again there was that attention to detail— several of the layered skirts had traditional Swedish embroidery on them and yet you don’t see that or notice it. But for Chanelle, the most important part of a costume is the shoes. “If you have the right shoes, you are able to walk the part from the soles up,” she says. Annekje’s shoes were old, worn shoes that suited the part of a goat herder living on board a ship as the only woman amongst a crew of 300 odd men for months at a time. ”I couldn’t be pretty,” she says. “I had to think about what it would be like to live in that situation.”

Now, about those goats….they were all terribly well-behaved, well-trained goats. Not one of them did anything remotely naughty as the goats I have known did. And not just the goats—the pigs and chickens, too. All the animals are accustomed to being on sets and have their handlers close by to reassure and assist, if necessary. Even the cheese that she offered in the one scene was genuine Chevin goats milk cheese.

It wasn’t just the animals who were well-trained. All the crew on board the ships were local South Africans who are trained to deal with the ropes, sails and other gear. They are not first and foremost actors, but rather more in the line of stuntmen who dressed for the parts they had to play. Chanelle says she was so proud of the South African crew. “They were so professional and hard working. Out of Africa, the production company, did a superb job—everything was top notch. The Cape Town Film Studios itself is an incredible facility with state-of-the-art features, such as lighting and “anything else you can think of.”

Apart from attention to detail, the other thing that struck Chanelle was how professional everyone was and, at the same time, so friendly and down-to-earth. “You don’t feel intimidated, rather they treat you as if you are an equal.” This was particularly true of Cait, with whom Chanelle worked most closely. “She is the most amazing actress I’ve ever met,” she says. “We were able to make a beautiful connection. Caitriona isn’t like a lot of top actresses with big egos who want to be the centre of attention all the time. She usually sits off somewhere reading a book while on a break between shots. She is just lovely and deserves every success she has.” Chanelle is also thrilled with the photograph of the two of them together that Caitriona gave her on her last day of filming. “She said that I look just like one of her sisters,”Chanelle says. 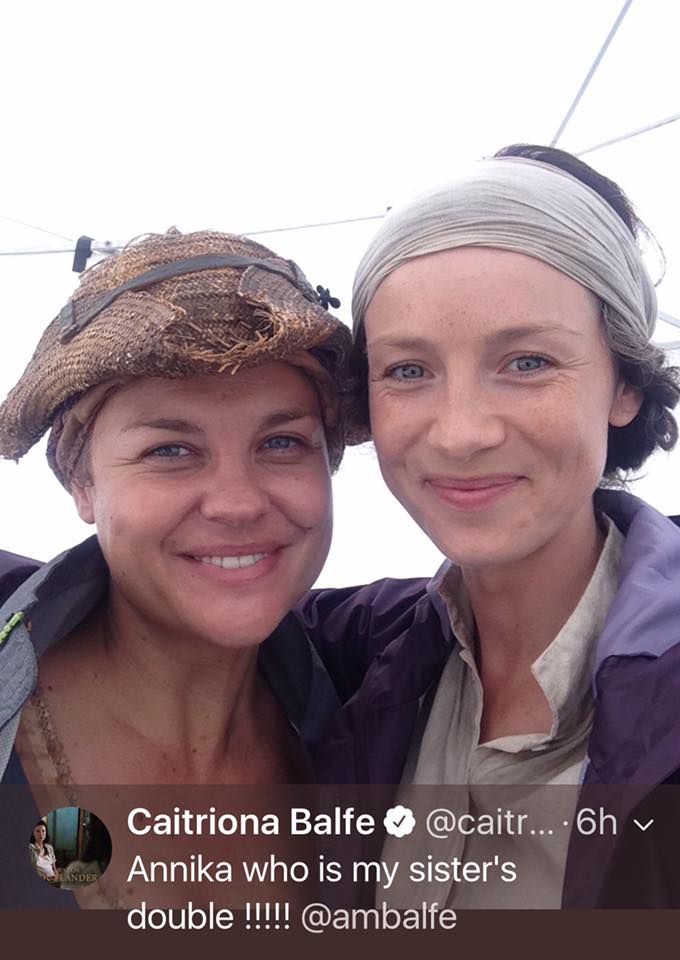 So what about Sam?  Chanelle says he had a ball while in South Africa. He enjoyed the night life in Cape Town, which was near at hand as the cast and crew stayed at the Waterfront of Cape Town Harbour. Then, of course, there was all the opportunities for outdoor exercise. “I wouldn’t have survived with Sam,” Chanelle says of working with Sam. “I couldn’t have a gotten a word out—he’s perfect!!” (and so say all of us!). She was overwhelmed when he brought her a glass of wine and made sure she was comfortable and happy at the wrap party.

The last night of shooting their block was utterly memorable. They were shooting on the beach and Annekje had to help Claire escape. There was a tremendous thunderstorm going on with lightning so they would rush out on to the beach take a quick shot and then have to pick up all the gear and run up the beach for shelter before returning once more. “When I shouted at Claire, ‘Go now,’ there was a huge clap of thunder, and Cait and I screamed and grabbed each other like two scared little girls.” That scene made the blooper reel shown at the wrap party, which was “great fun and the end to a wonderful experience.”

What was your favorite part of the Goat Lady?