When the Starlight Ends: Should Sam Heughan Fans Buy or Boycott?

Sam Heughan made When the Starlight Ends in his early days as Jamie Fraser on Outlander. Now the newly-edited film is coming out on DVD. Should Heughan fans buy it or not?

Sam Heughan stars in the film, When the Starlight Ends due for release this March, and now available on pre-order. The DVD reached #5 on the Amazon romance DVD list, at one point.

But wait! Not so fast, Sam-superfan. Before your eager fingers click “BUY,” you might want to know about a few things that went on behind the scenes.

Sure, when Sam was filming it, he loved the process and completing this project with such a talented director, cast and crew. He tweeted about it during production, almost three long years ago now. 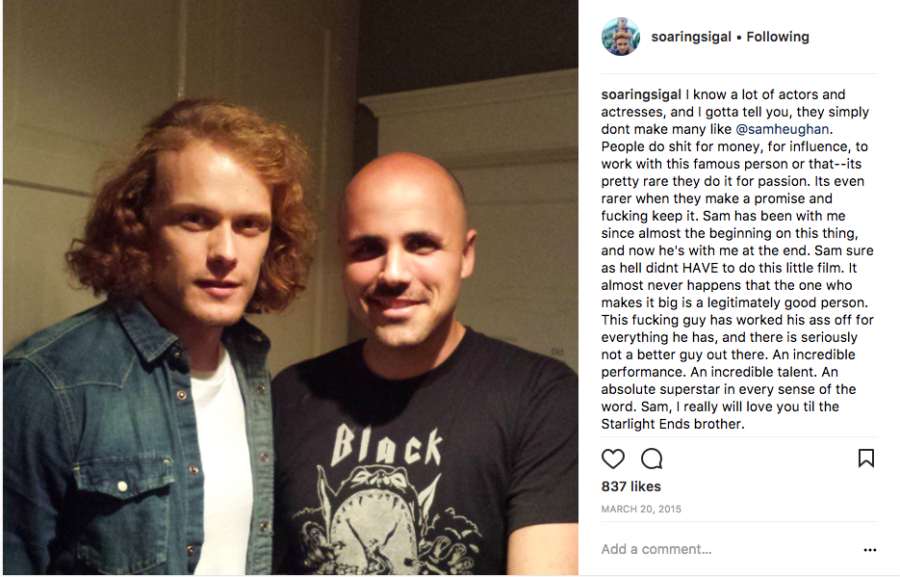 But then… something changed. From what I can piece together, the financiers took over, re-edited the project and turned it into something it was never intended to be. Something Sam never approved.

Sam’s long-time friend, writer/director, Adam Sigal — the VERY REASON he agreed to do the project — developed When the Starlight Ends to be a “creative” more intellectual and quirky dark comedic indie, as opposed to a dumbed-down commercial dramedy.

Taking editing out of the hands of a director is a bit of a sly move. It’s done, at times, but it’s not often nor optimal, and it’s certainly not nice. The actors, already with their pay cheque in hand, have no say in how scenes are re-jigged. 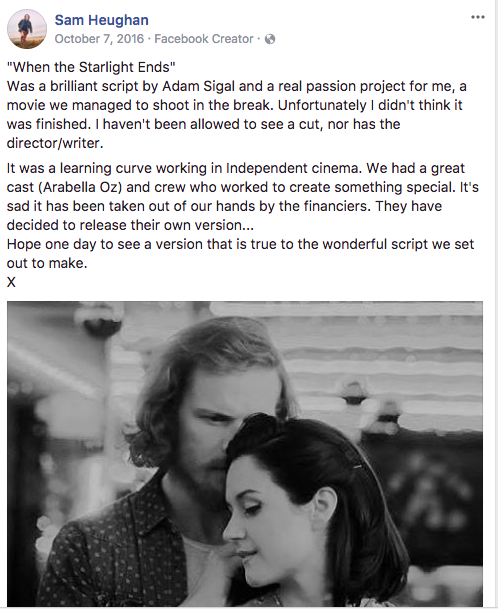 If you want to see Sam’s original shooting script, you can see it here.

And back in Fall 2016, fans knew Sam wasn’t happy with it. So is he impressed by it now? By far the biggest clue I’ve noticed? Dead silence from Sam (and from everyone except the financiers) since the pre-order launched weeks ago. No tweets, re-tweets, Instagram or Facebook updates. A resistance to it, by omission. Fans know that’s not like him at all. This guy is social media-savvy. He uses it to the max and always makes known the projects that make him proud. Did you hear he’s raised $1 million for cancer research? Sure you did, because he is proud of it!

Most definitely, he’s seen the newly edited version by now. And so I have to ask — we all have to ask — does he not want to support the film’s final version?

So here’s some help in making your decision as his fan: the pros and cons to buy or boycott the DVD:

• I’m desperate to see his face, hear his voice.

• Doesn’t this happen all the time in Hollywood? We’ve already experienced the misery of watching our favorite adapted-to-TV characters edited down to nothing like they are in the books.

• The Outlander S3 DVD will be out soon enough. Not only will you see Sam’s face and hear his voice, but you’ll see never-before-seen-footage through extras and deleted scenes he is definitely proud of. Just look at this… did you see it? We’re finally going to see the original screen test with Caitriona! 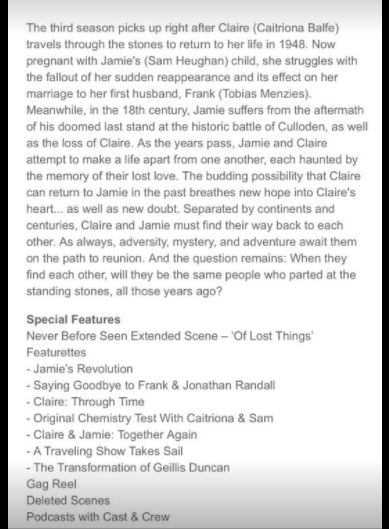 • If he doesn’t support it, neither will I. I feel badly for him, but I will respect him enough and support projects he is proud of.

• It’s financial backers gone rogue. They are in it for one reason only — to make money. I get that. But, I’m not a pushover or stupid. If the financiers thought I would buy it only because it has Sam’s name on it (yet not his approval), they have another thing coming. I’m not going to be used.

• This certainly happens in Hollywood, but stars push back, either calling out the maliciousness, or refusing to promote it. That would include Natalie Portman, Emily Blunt, and Channing Tatum, for examples.

So here’s what I believe:

We’re not desperate. We are fans of the show, Outlander, and we adore the people of its cast. One of the reasons we admire Sam is that he encapsulates the integrity of Jamie so well. So, the assumption that Outlander fans would EAT IT UP, regardless of whether Sam supports the revised finished product or not, is what saddens me.

So why not leave it up to Sam? If he tweets or promotes it, then we know he supports it. If he doesn’t, then if I were you, I’d be asking Amazon for my money back. Another option is to do what Adam’s father suggested in a comment about this post: “Rather than buying the DVD, I donated to Adam’s new indie Sargasso starring Tom Berenger, Jeremy Sumpter (Peter Pan; Friday Night Lights); Tom Berenger (Oscar Nominee for Platoon; ….Major League; Sniper and much more; with Graham McTavish (Outlander; Preacher: The Hobbit and much more)….” If that idea interests you, just click on the IndigGoGo campaign Adam is running.

Unless the producers want to re-edit the film to its original glory and Sam’s liking, then… maybe… the fandom they took for granted would reconsider.

What do you think? Do you plan to buy the DVD or not?