We’re continuing our Outlander Season 4 behind-the-scenes photos and filming coverage, this time with Outlander filming in Glasgow. Spoilers ahead! Don’t click if you don’t want to know!

Someone called us the Dynamic Duo, so why not? If dynamic includes travelling, walking and standing around in less than ideal weather conditions (hmmm!), then yes, that is us! Again, the efforts to bring you this story span a couple of continents. The wonders of our techno world! 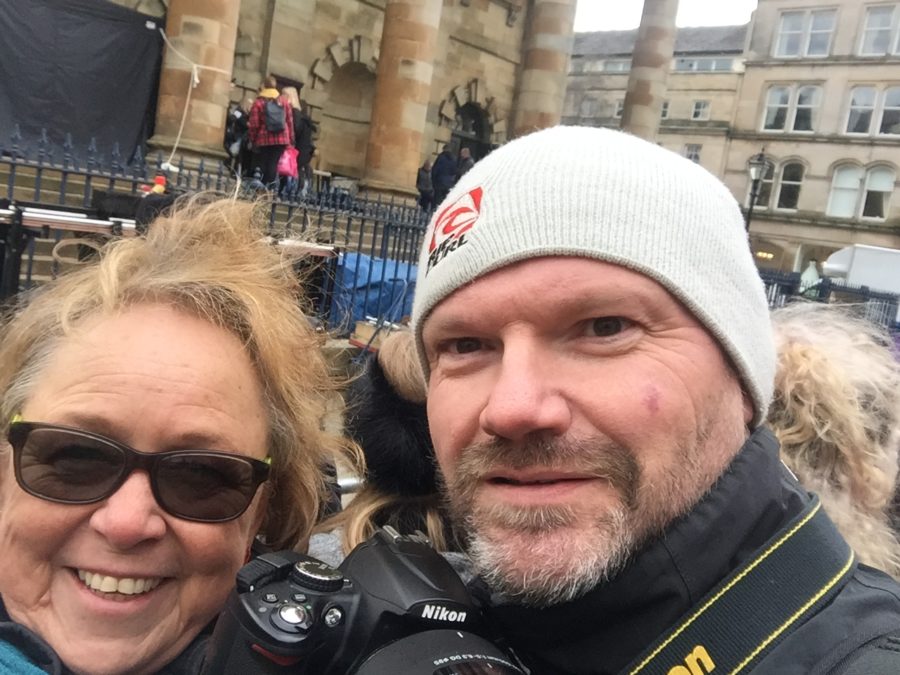 Dynamic Duo? Dressed for the conditions.

This time our adventure started with Gary Dempster (photographer extraordinaire) rising with the larks and travelling north to Glasgow, to meet Andrée, your Glasgow-based blogger. Coffee, chats and plans of attack done, we made our way across the city to St. Andrews Square, where our social media channels told us that Outlander would be filming for two whole days.

We arrived in the beautiful St. Andrews Square to be very pleasantly surprised about how close were able to get to the action. 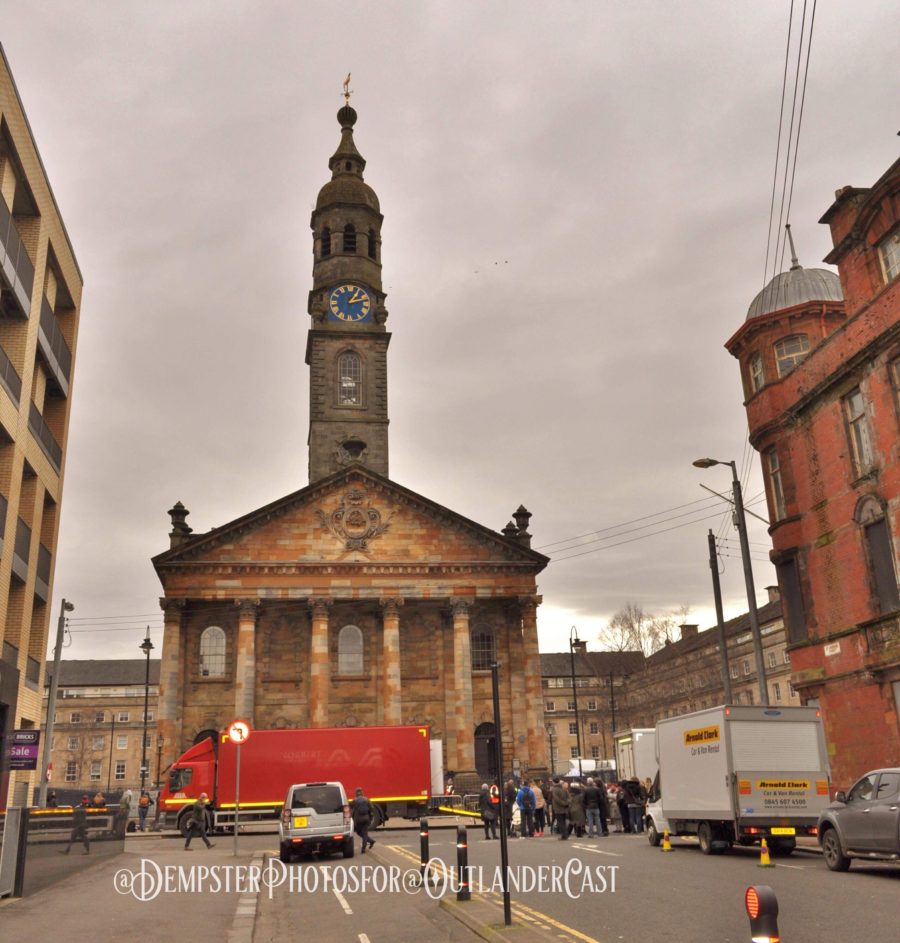 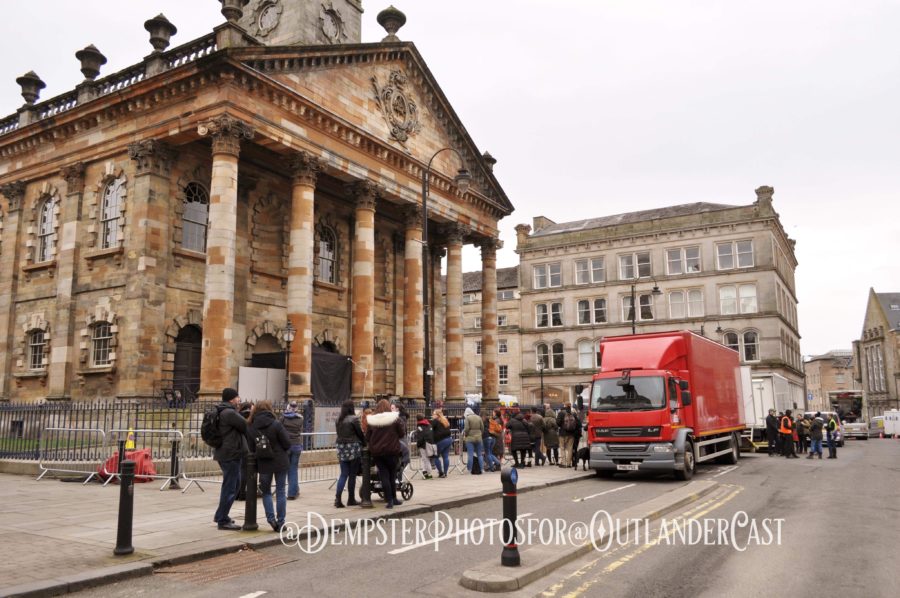 When I say action, there actually was not much to see on Day 1 as the filming was all indoors. This meant that we could really only see the actors and extras coming and going. The extras were apparently dressed in 18th Century party gear (what we could see under their cloaks and coats) and there was also some pretty wild head gear on show! 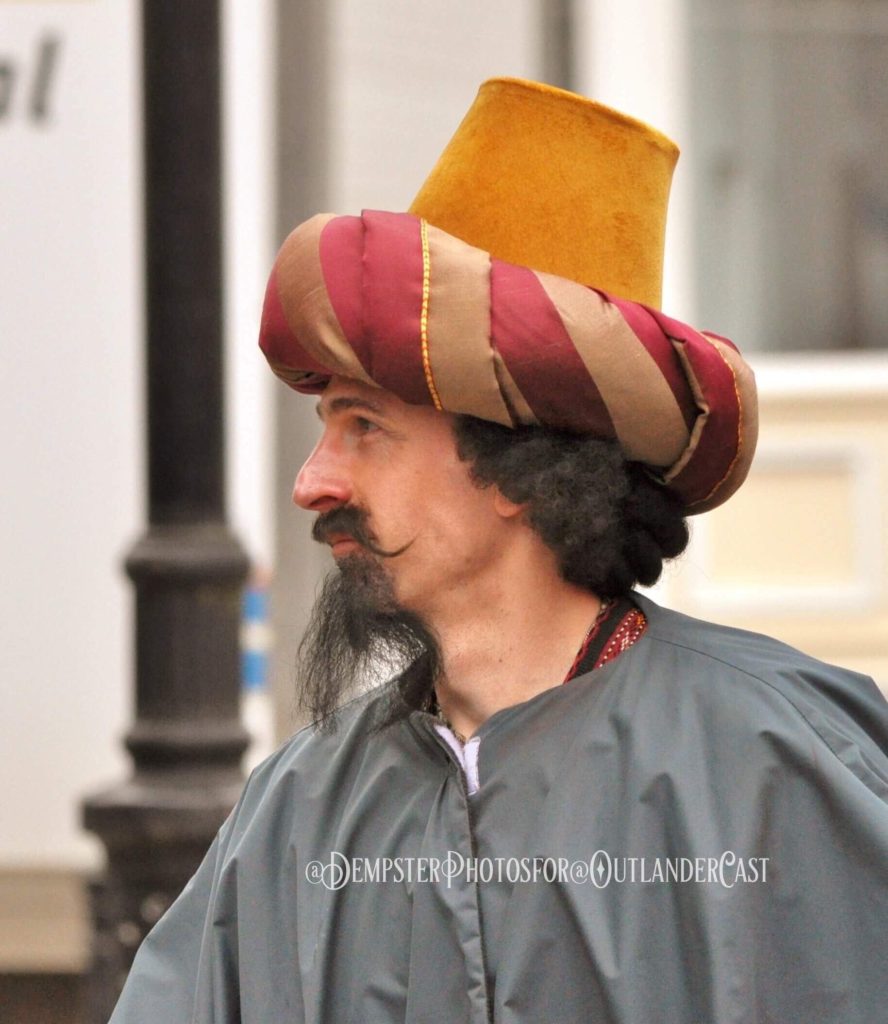 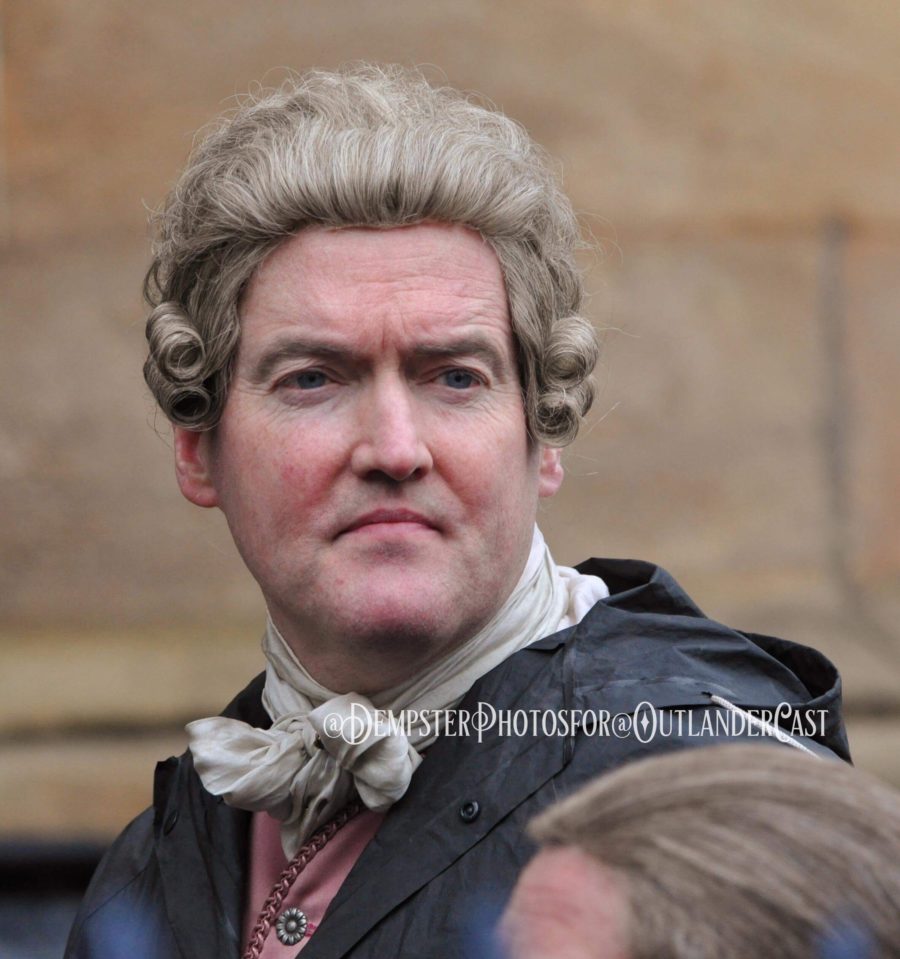 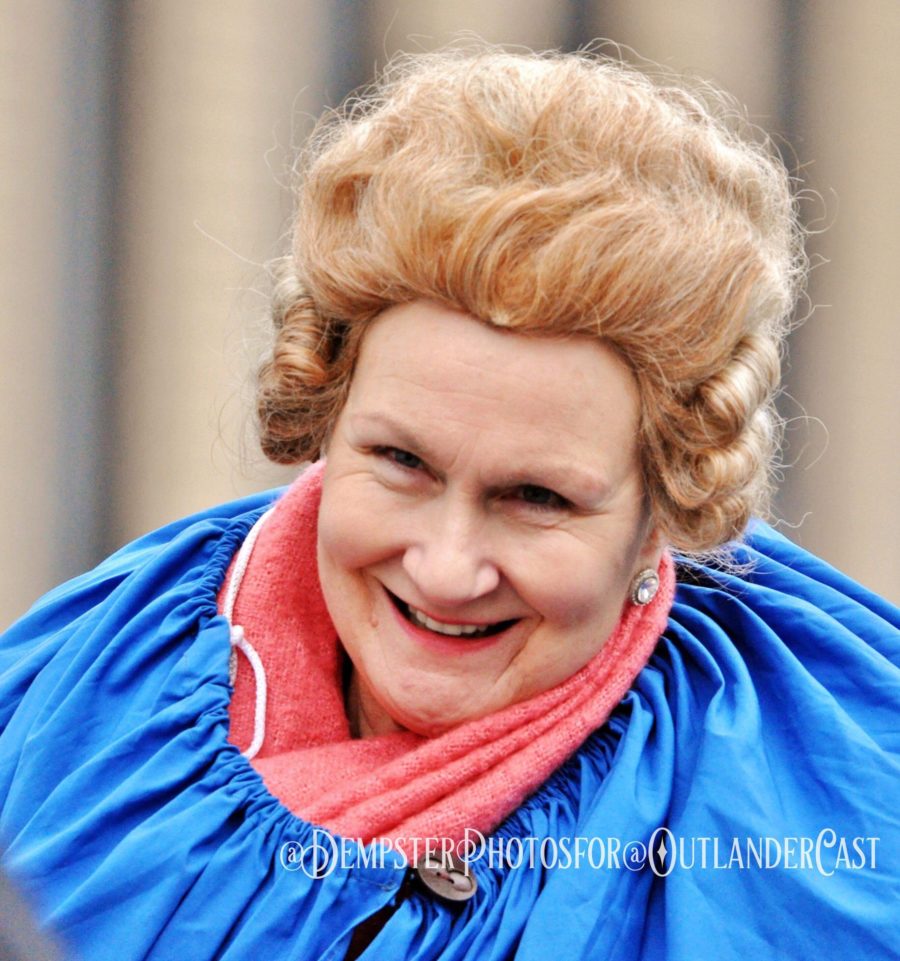 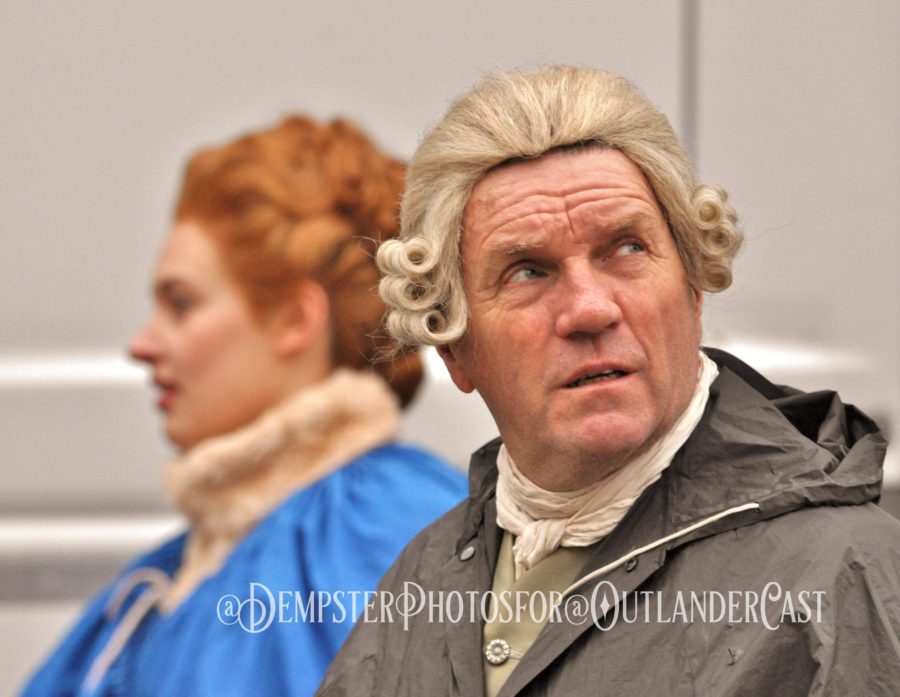 As usual, Caitriona Balfe and Sam Heughan were very generous with their time, and came over to mix and mingle, sign autographs, and have selfies with the assembled throng, as they were leaving for lunch (at 3.45pm!) 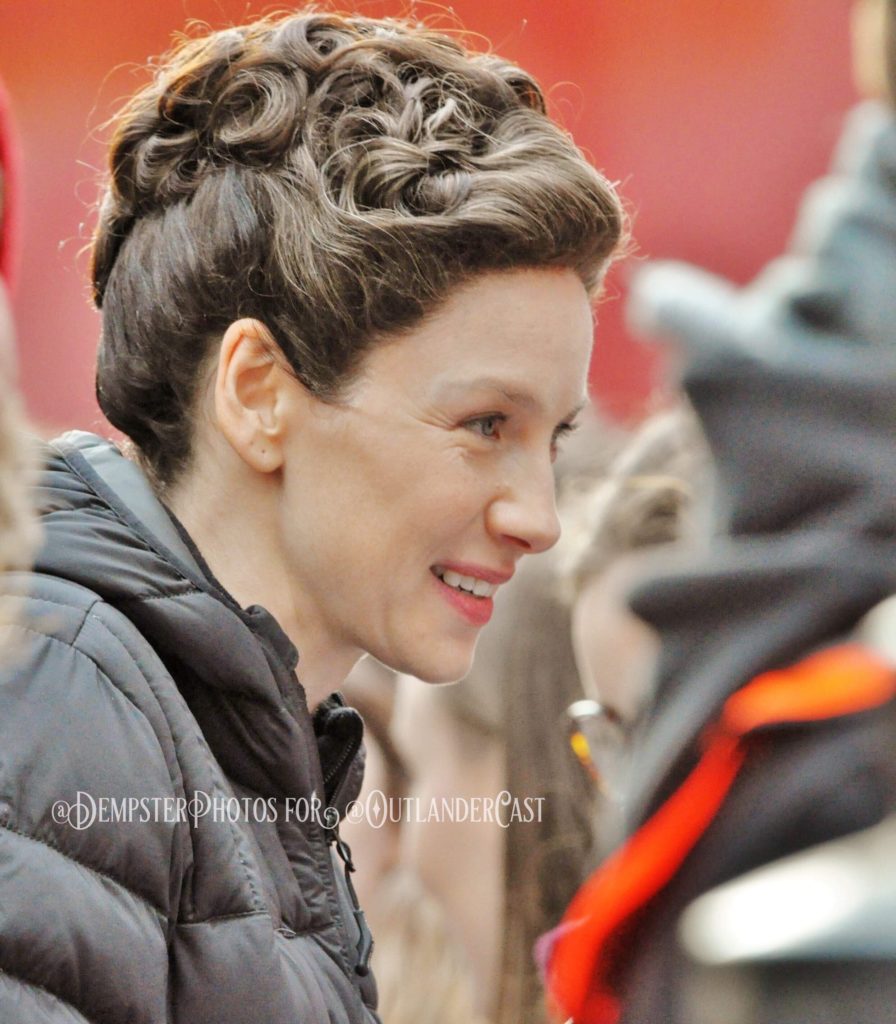 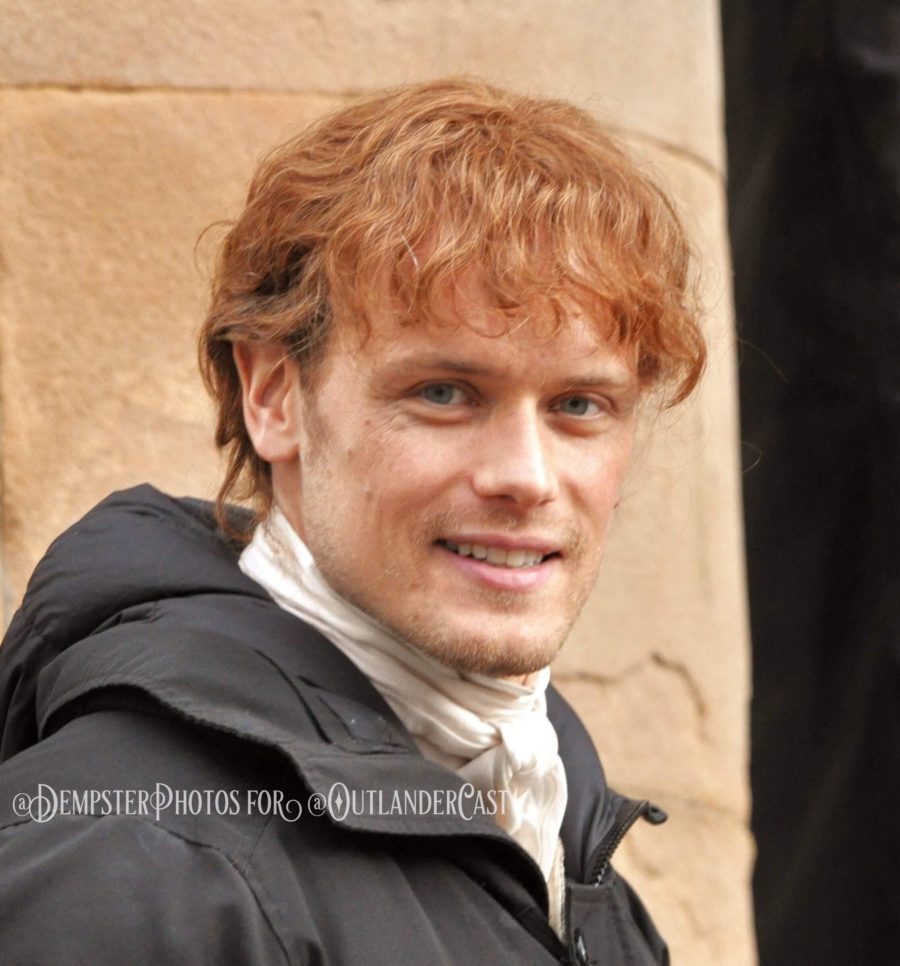 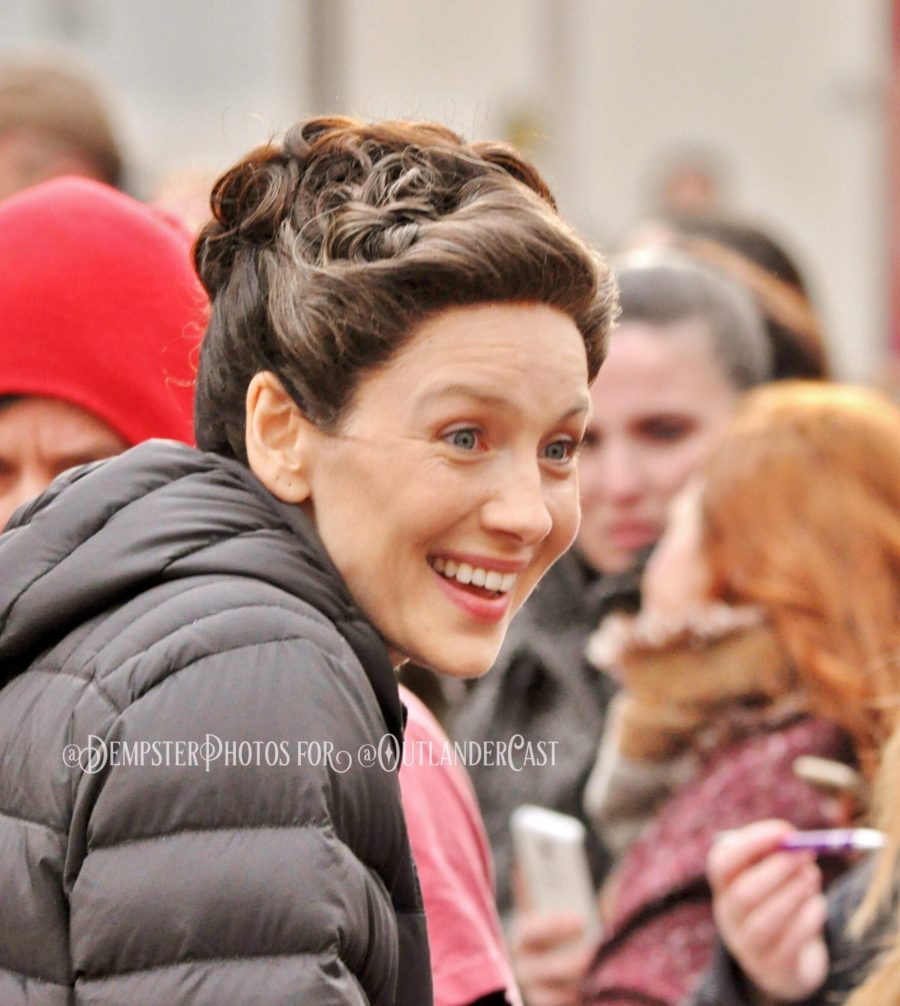 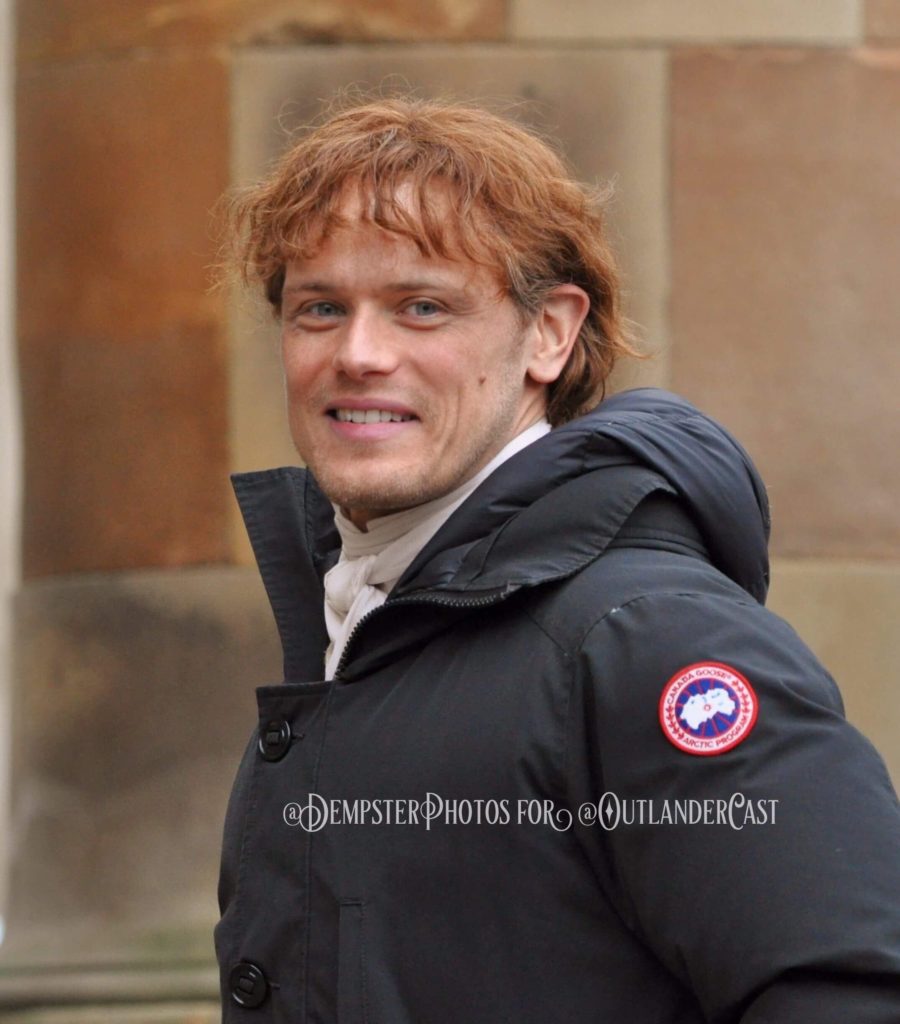 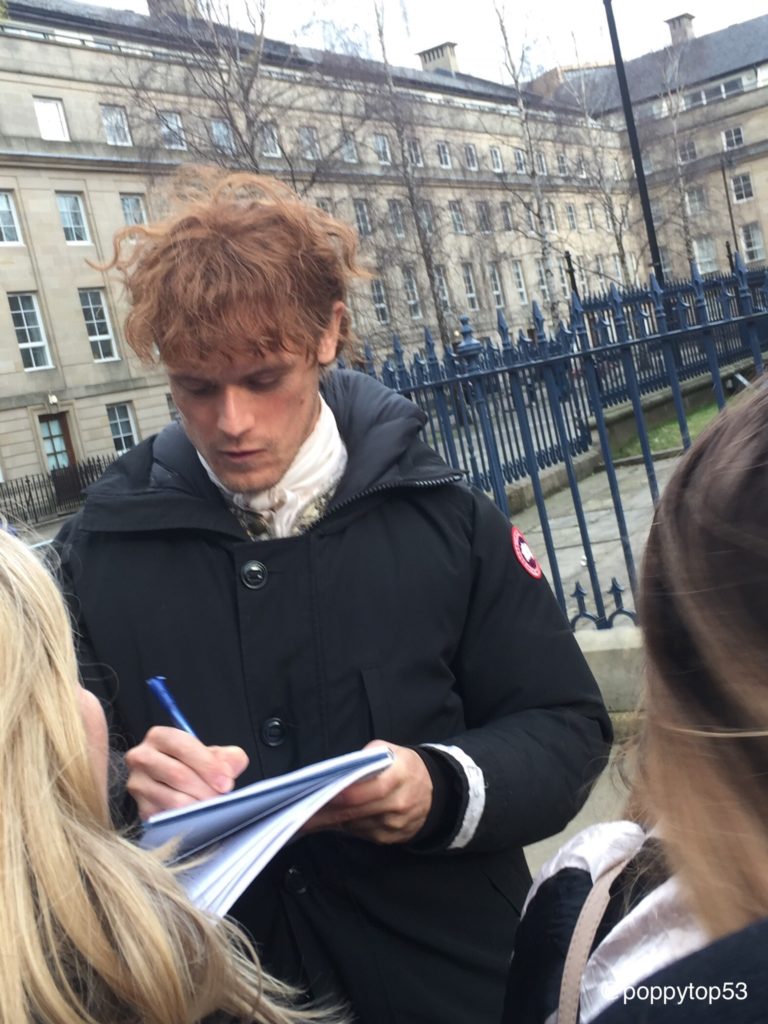 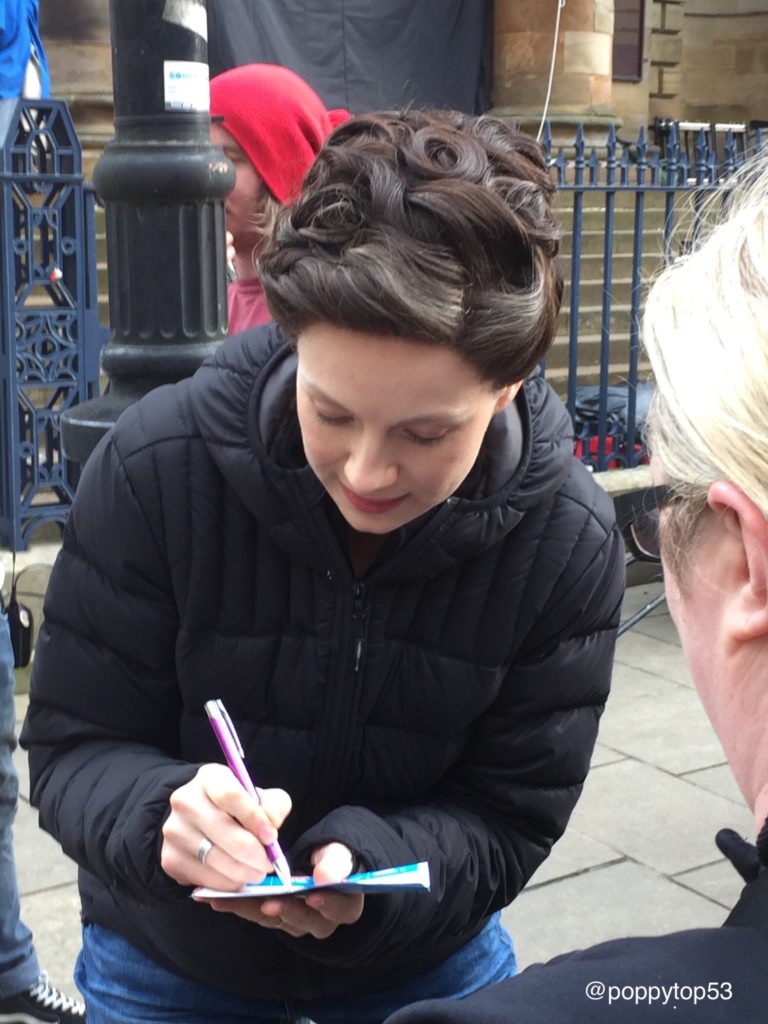 It was actually bitterly cold, the temp got up to 7 degrees C (wow!) but there was a wind tunnel effect on that street and the ground underfoot was like ice. Nevertheless, we persisted. And it looks like we even got our own pics in the local paper! And there may have been a wee interview with Glasgow Live! 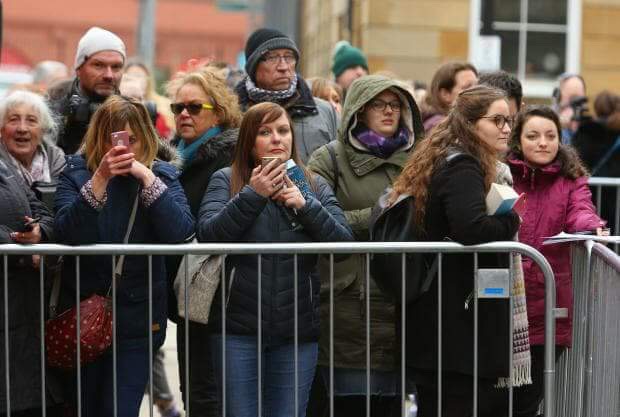 The day done, Gary returned south to sort and process his pictures while I moseyed back down there about 7 pm to find a new but smaller crowd of onlookers. Still, all the action was indoors and we could hear the familiar calls of “quiet please!”, “rolling!” and “cut!” I decided not to hang about as I knew there was an early start tomorrow. Of course, Sam and Caitriona did come out when they finished work about 10.30 pm (long days!) to greet the fans. St. Andrews Square did look beautiful at night. So much of Glasgow’s architecture and street scapes are beautiful and fascinating. 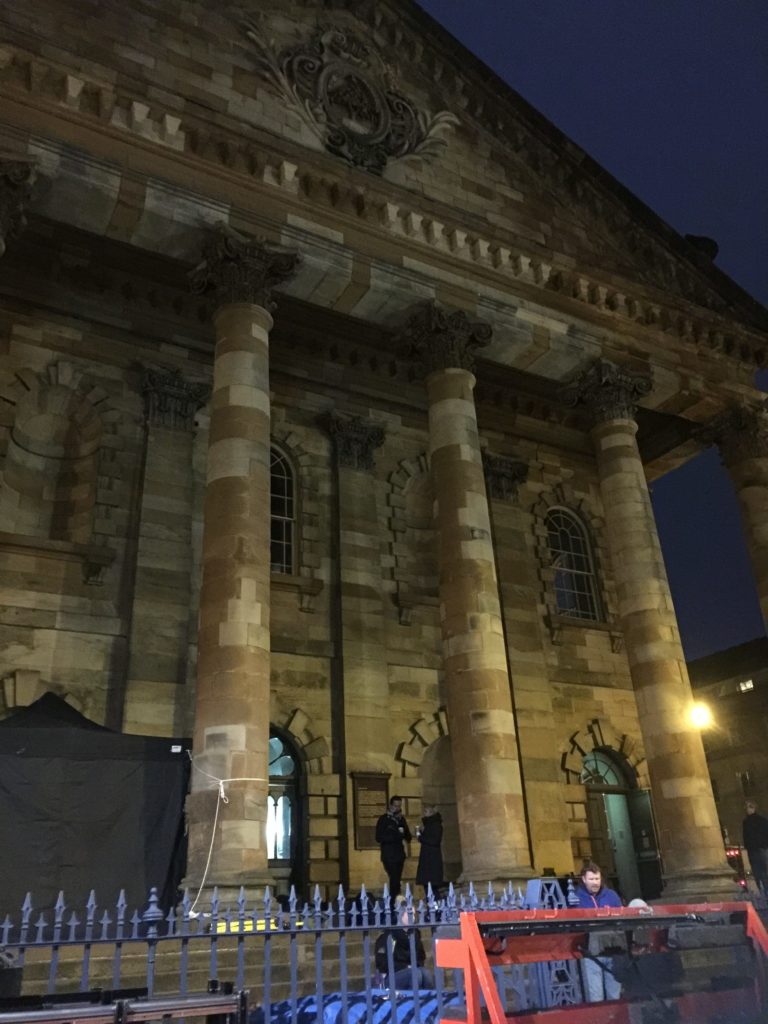 Day 2 saw a significant deterioration in the weather. Not only was it cold and windy but a steady light rain had been added to the mix! So, out with the hiking gear, specifically the waterproof pants were added to my intrepid reporter wardrobe for the day. And I was all set with umbrella to hold over Gary’s camera if needed

Sam and Caitriona arrived on set at about 11 am. They dashed in through the rain with just a little wave to the onlookers. Although this becomes a time of frustrated waiting. It’s also a time to make connections and hear the stories of the other spectators, from local folks who just nipped down in their lunch break to people who came up from England to stay in a hotel for a couple of days,. There was even a group of people from Bosnia. Another lovely Scottish couple, huge Outlander fans, were excited to have their first opportunity to see some filming. They had actually stayed in Frank and Claire’s room at Mrs Baird’s guest house! One particularly happy connection we made was with an older couple from England, Bryan and Linda. Gary and I first met them when we tracked filming at Dunure and then here they were again. Linda, a big-hearted woman with a passion for Jamie Fraser (and — ahem — Sam Heughan) was determined to meet Sam. “I’m old enough to be his grandmother!,” she said. “In fact I’m going to call out and ask him if he wants a grandmother!” 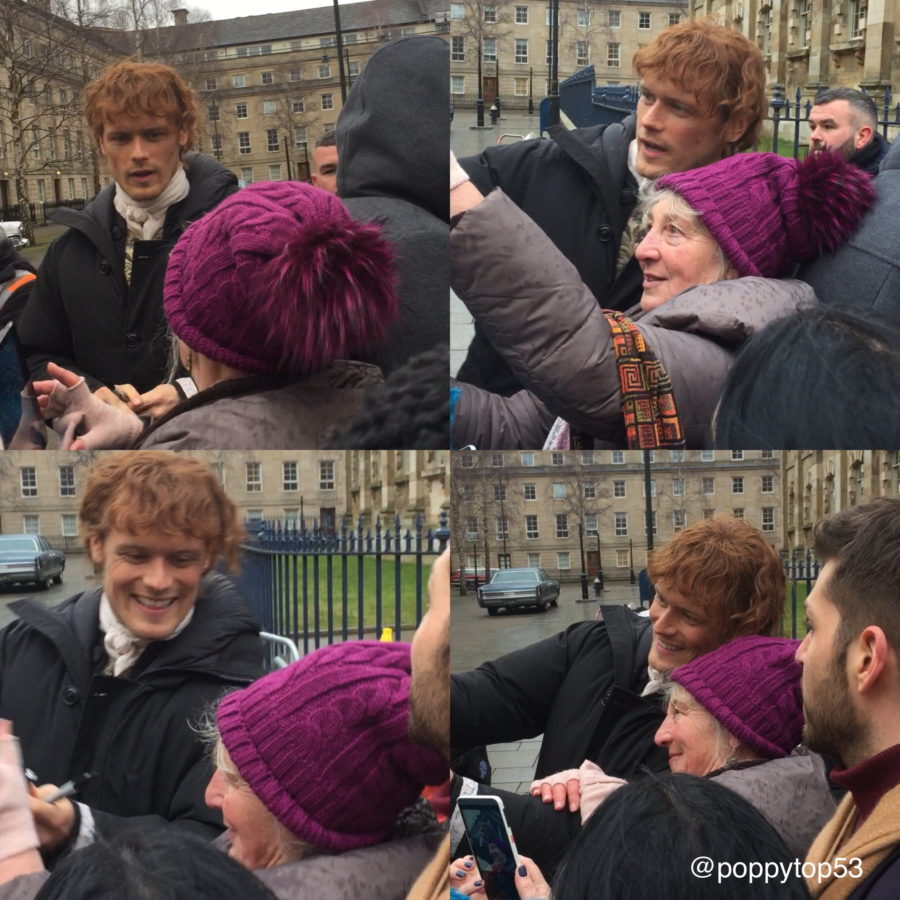 Linda gets her wish!

When Sam and Caitriona came out at the end of their day, they generously and patiently worked the crowd, signing autographs and taking selfies. There was a bit of a crush at this point. Suddenly so many people were hoping for their few seconds with the stars. 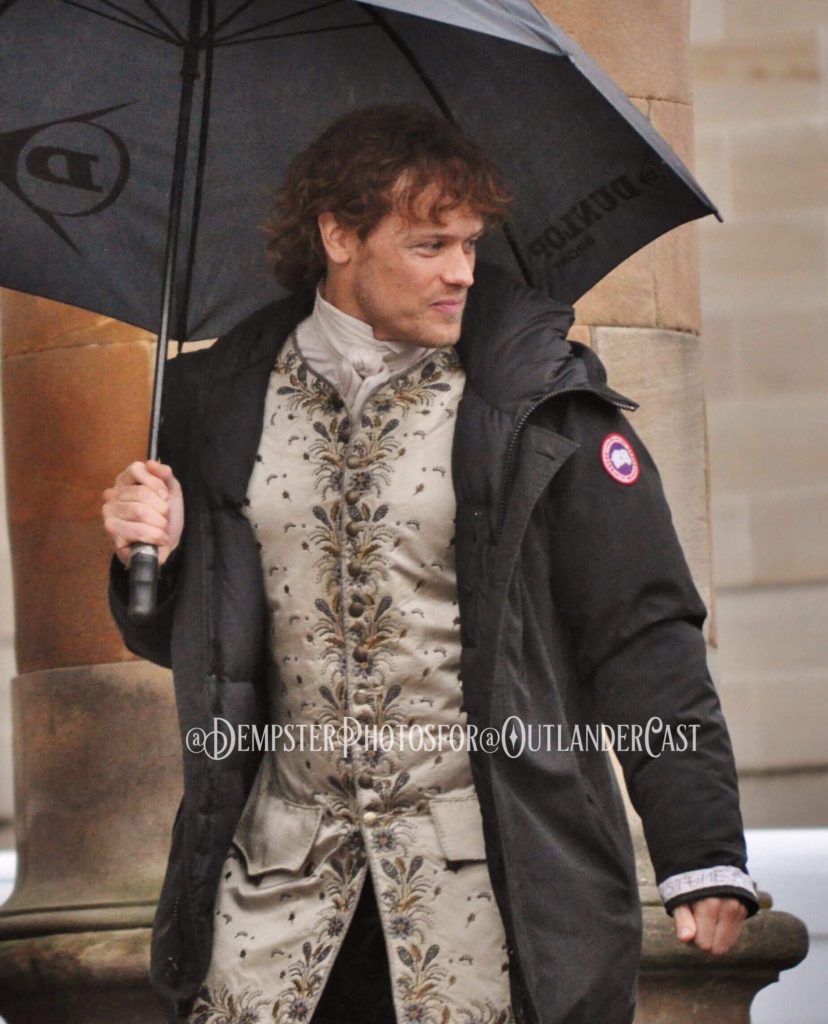 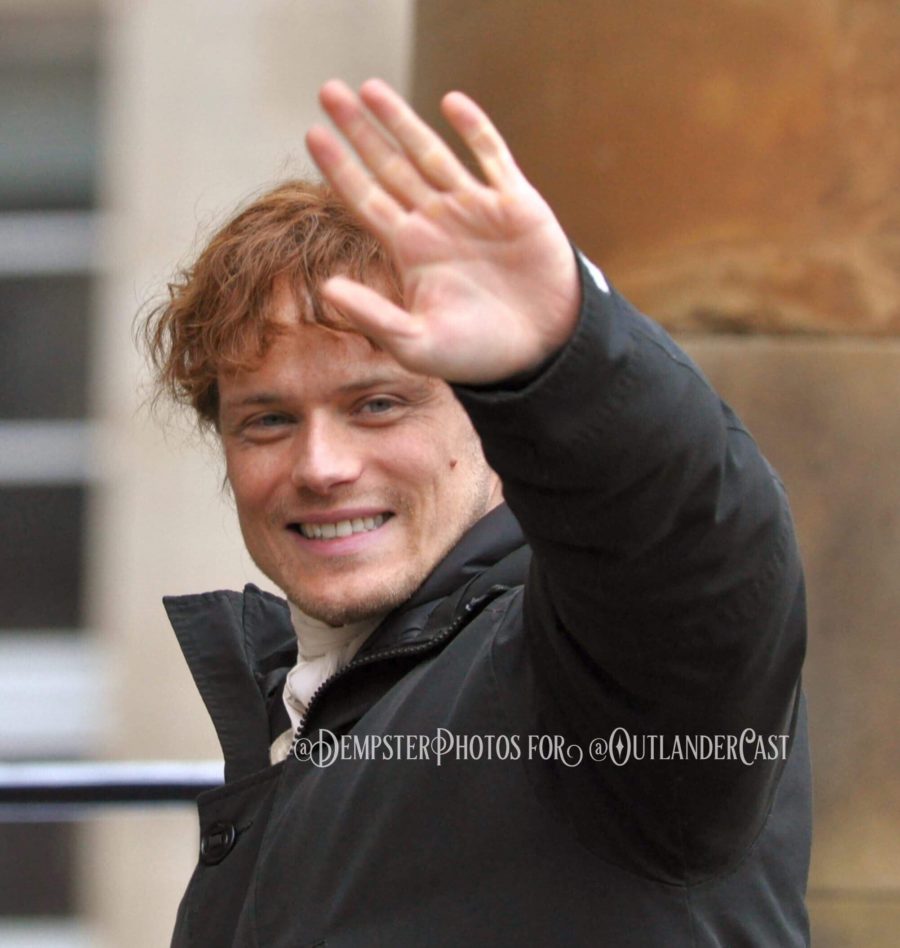 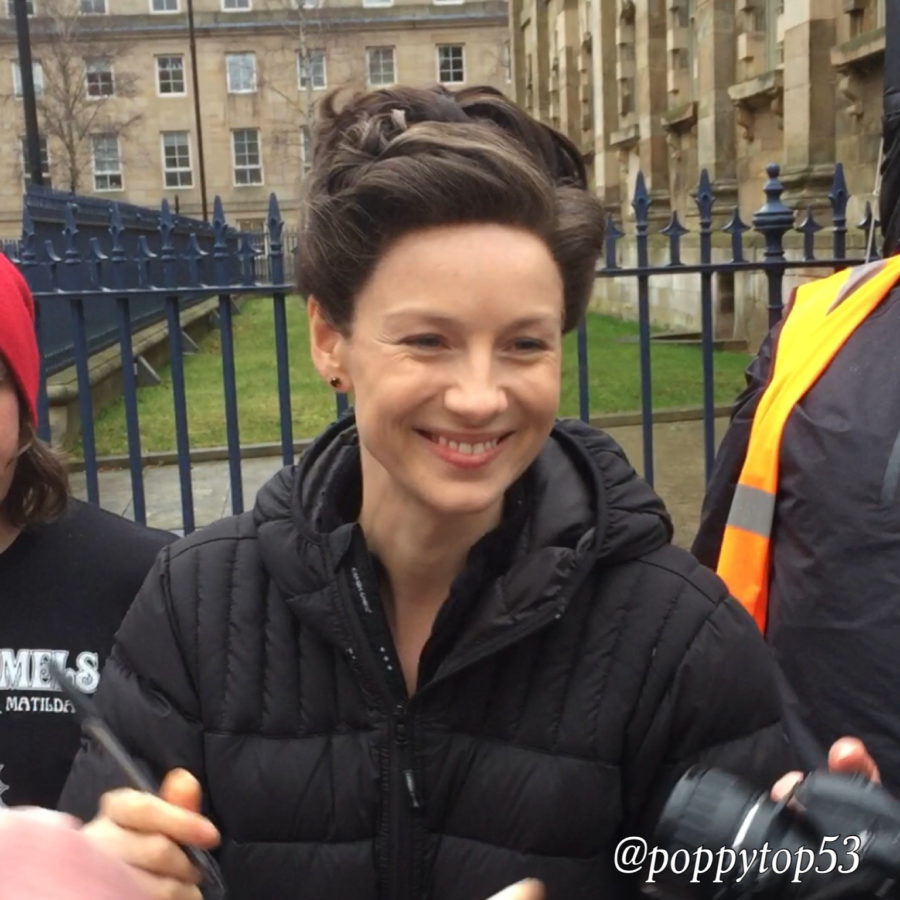 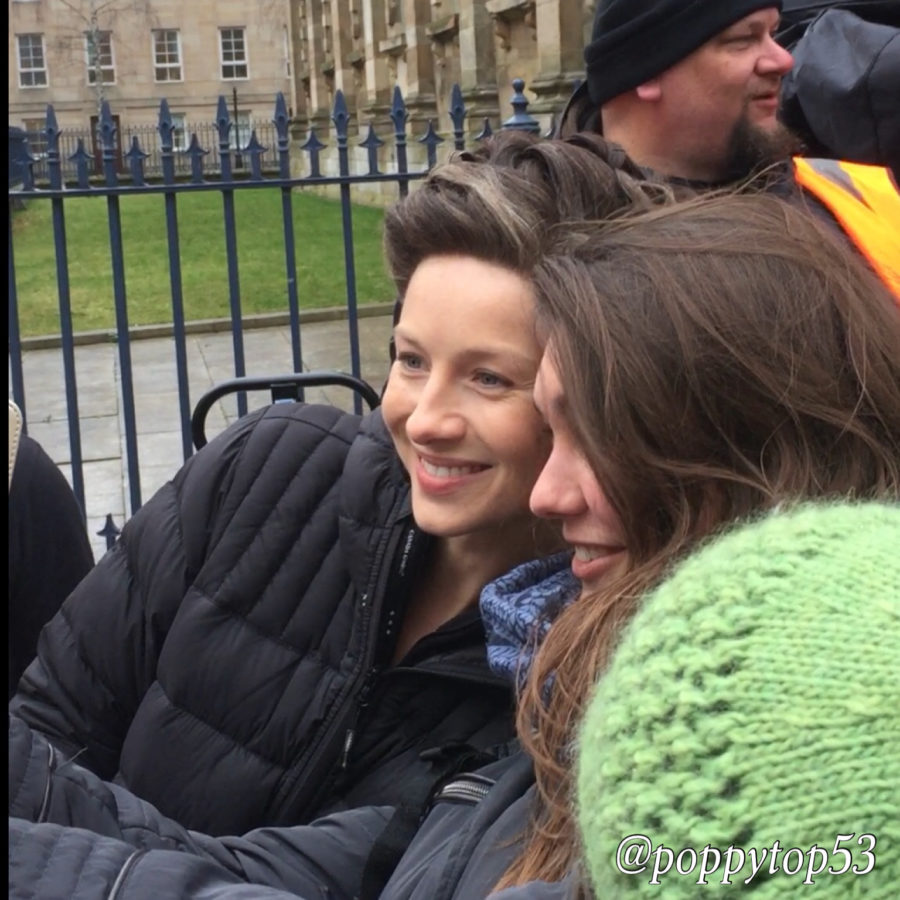 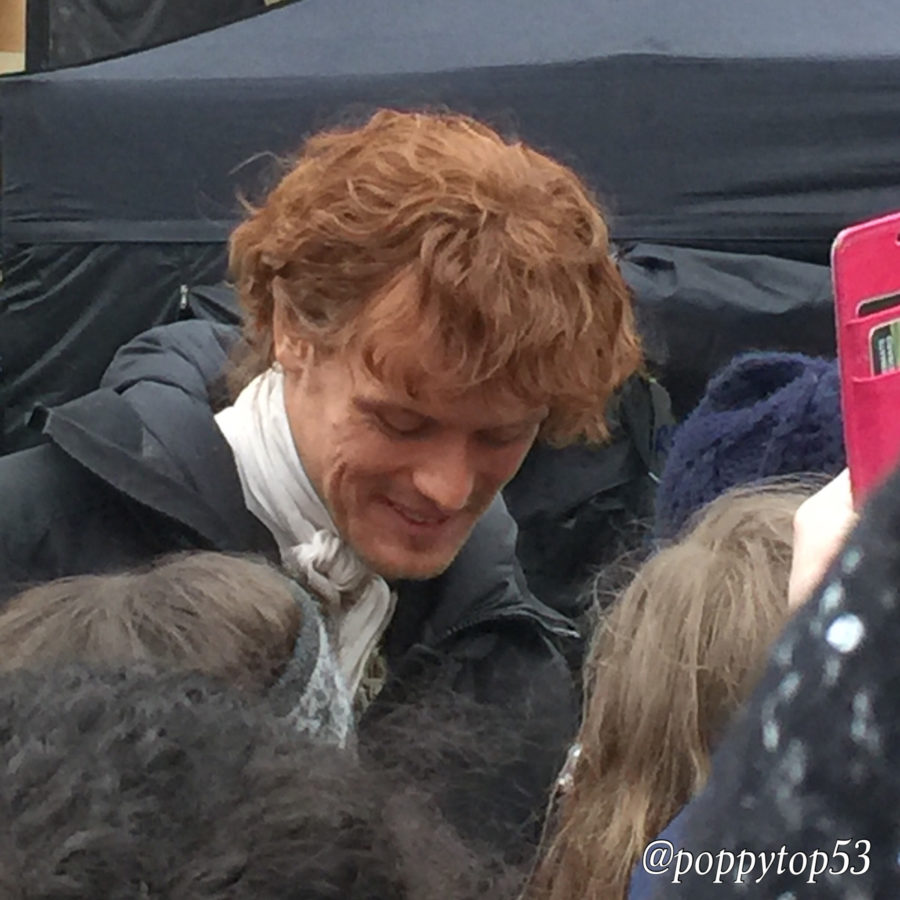 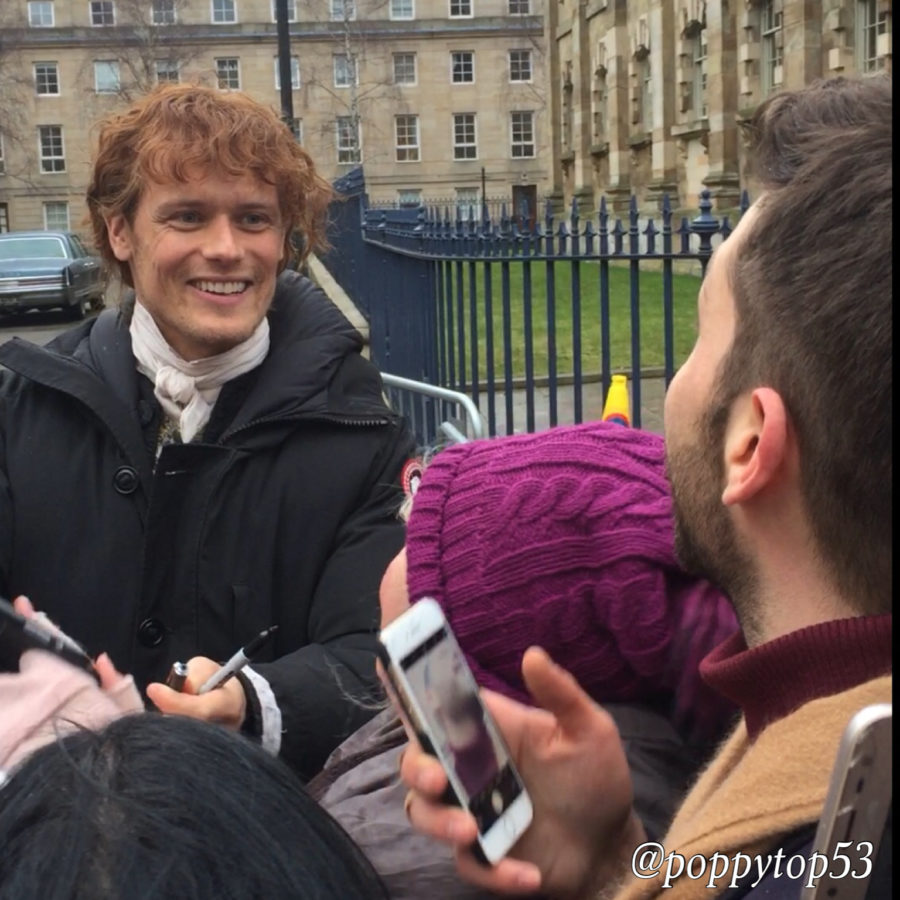 We knew that filming was to take place outdoors in the evening … and we had seen a lot of 1960s vehicles being assembled during the day. So, they were changing centuries. Hoping that we might later get a glimpse of Richard Rankin or Sophie Skelton, we left, restored ourselves with food and cups of coffee, and returned to the fray.

This proved to be disappointing as the action was around a corner and the barriers made it difficult to see anything. We soon learned that they were shooting some nighttime street scenes with extras and that none of the stars seemed to be there. 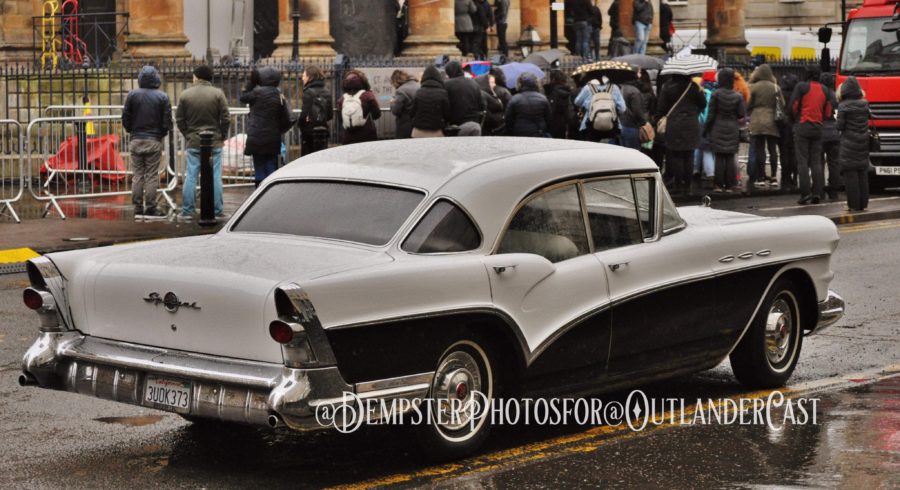 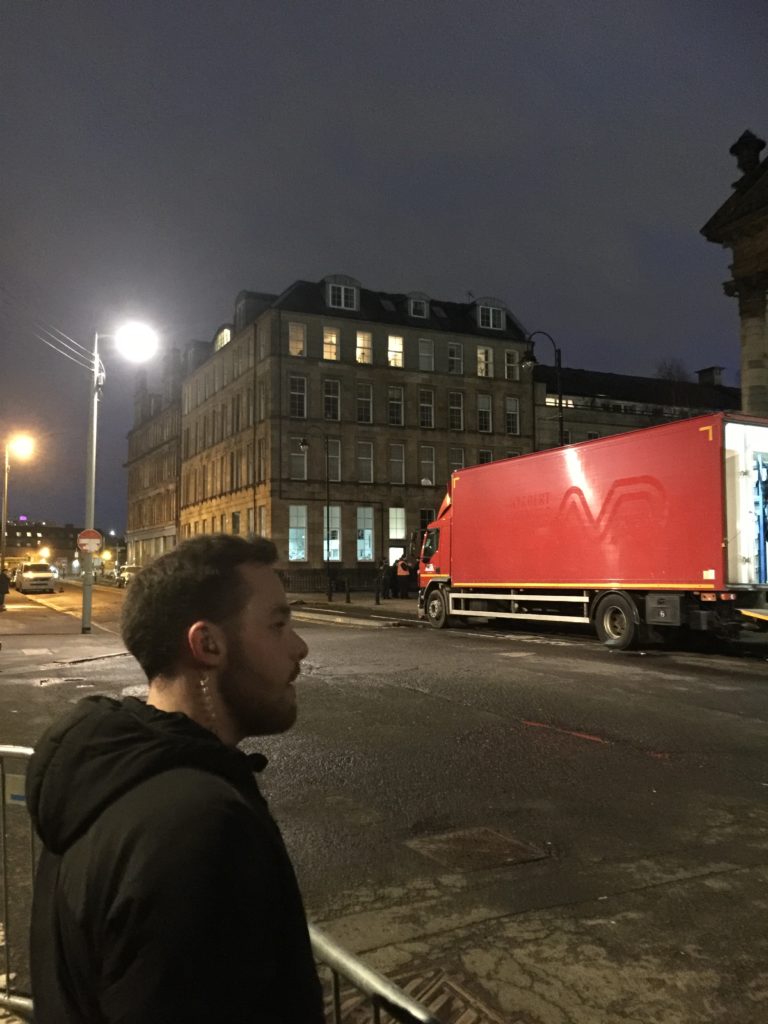 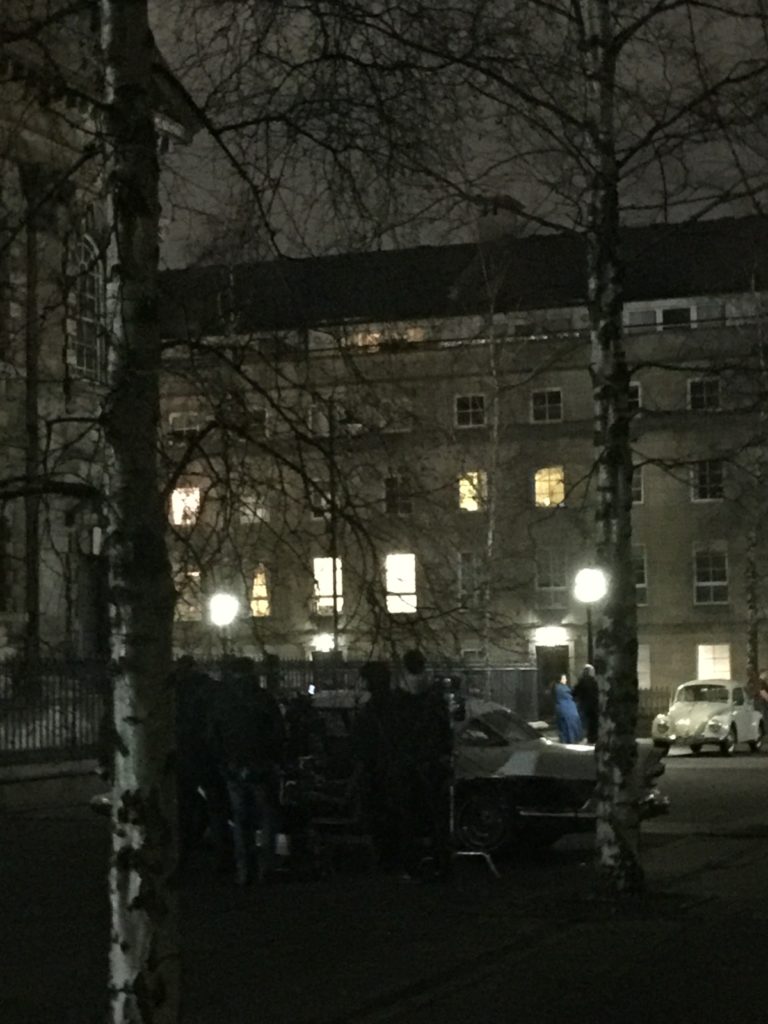 We caught a little glimpse of the action but that is all folks. To be continued … one day … in the not too distant future. We hope.

So, what do you think about the 18th century scene they may have been filming? A trailer was seen at the base with the name Governor Tryon on it. Hmmm, there’s a clue! And what on earth could the 1960s street scene in the dark be all about?