Why Outlander is TV’s Chemistry Central

Outlander onscreen chemistry, especially between the two stars, Caitriona Balfe and Sam Heughan, is a well-known fact. We look at what makes them sizzle and how to spot chemistry in real life.

In the STARZ TV series Outlander, the chemistry between main characters Jamie and Claire flows and swirls like the River Spey snaking through the Scottish Highlands. But before we delve further into that magical abyss, let’s start with the basics. Like, just WTH is chemistry?

Chemistry between two people is obvious, but each of us likely have our own definition. I picture it as a cocktail created by our brain, a deep red concoction of all the feel-good chemicals – serotonin, oxytocin, endorphin and dopamine. Poured over the dry ice of a mutual attraction, it releases smoky pheromones that waft through our prefrontal cortex, like Shakespeare’s description of love in Romeo and Juliet, “a smoke raised with the fume of sighs.” 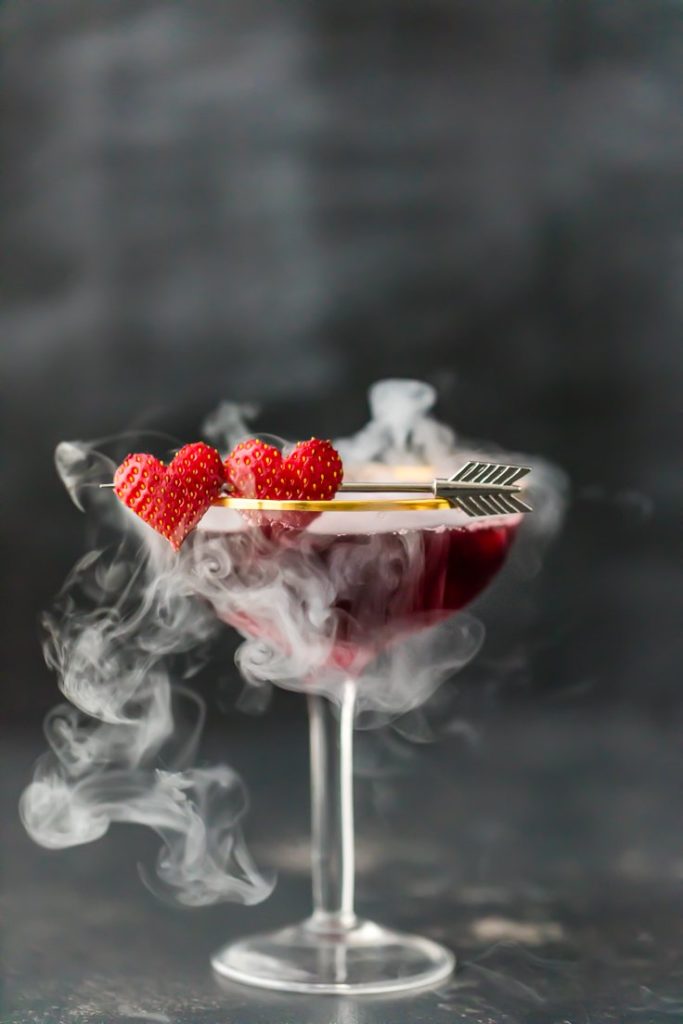 Truth is, it’s hard to actually define chemistry. It can be platonic, based on factors such as personality, lifestyle or intellect, things that bring kindred spirits together. It’s what gives us BFFs, people who “click” and “get” each other, #justnotTHATway.

What we typically think of as chemistry, though, is absolutely, positively #THATway. In fact, it can be an intense, compelling, gut-wrenching thirst, quenched only by presence and touch.

It’s there when your eyes lock or your fingers brush in passing. You may fidget, smile, sweat and feel shy all at the same time. It could be fleeting, ending then and there, for various reasons. Then again, maybe you see each other often and one of you feels too intensely and chooses to intentionally part ways.

There’s no rhyme or reason to the “how” or “when” of chemistry. It magically appears without warning, an intense attraction that hits you both and sparks a fire in your brains that can make you literally lose your sense of self. 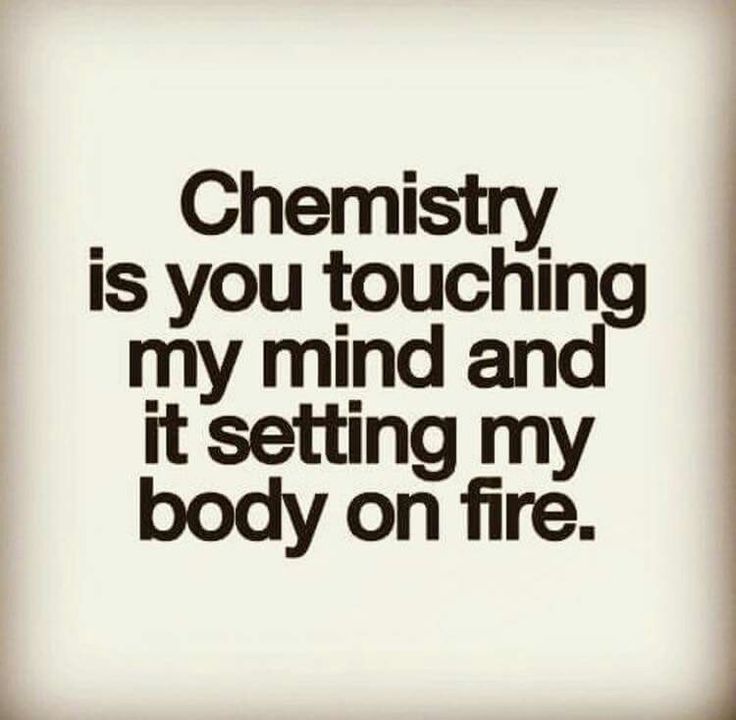 It’s blissful and nerve-wracking at the same time and, if you’re fortunate, can lead to a deep and fulfilling relationship. You become mind readers, able to understand what the other is feeling simply by looking at them. You reach out to each other at just the right time and say exactly the right thing. It’s as if you can see into each other’s very souls. In fact, to paraphrase Diana Gabaldon’s Jamie, you give up your own soul to possess the soul of another.

I began to ponder the nature of onscreen chemistry when my fellow writer, Holly Richter-White, shared an article about the platonic bond of her home country’s Ice Dancing duo of Tessa Virtue and Scott Moir, 2018 Olympic Gold Medalists who set world records as they set the ice and our screens ablaze with their intimate skating programs. It came to mind again as I watched the drones forming a huge heart in the PyeongChang sky at the closing ceremonies. 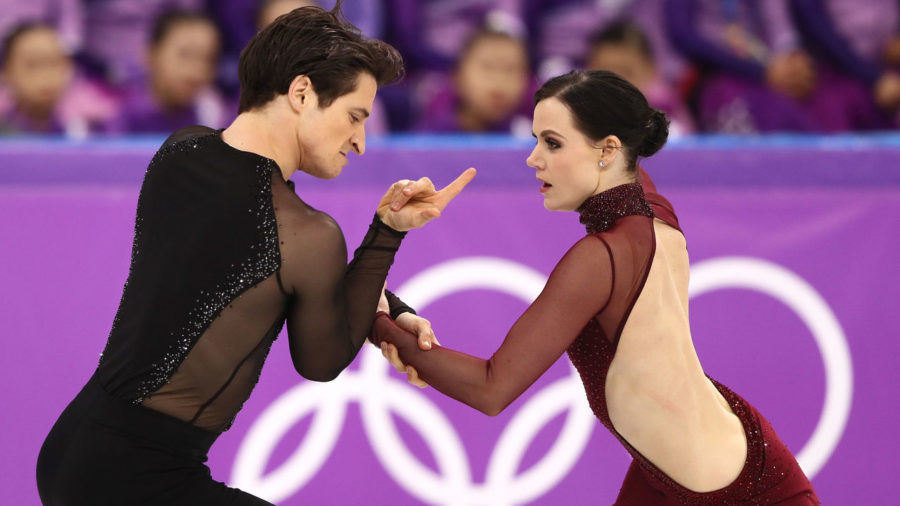 Virtue and Moir made me believe their story on ice just as Sam Heughan and Caitroina Balfe do on Outlander, based on the eight-book series by Diana Gabaldon, aka the Chemistry Queen. Heughan and Balfe, who bring to life Ms. Gabaldon’s quintessential soulmates Jamie and Claire, have much in common with Virtue and Moir.

While not couples in real life, both duos boast both a fiery onscreen chemistry and superb acting ability. They can easily make us believe they are someone they’re not and that they are madly in love with, and alternately mad as hell at, their onscreen (or on ice) partner. (Yes, I can tie anything back to Outlander.)

As the Olympic closing ceremonies amped up the tech factor, my mind began to wander to other Outlander relationships. On the platonic side, Claire definitely connected intellectually with both solicitor Ned Gowan and apothecary Master Raymond, and to a degree, her fellow time-traveler Geillis Duncan.

My absolute fave platonic duo? Rupert and Angus. These two had me laughing and crying with their shenanigans from the beginning. The Angus “a cow riding a mouse” comparison to Rupert riding a horse was the perfect example of their bromance as was Rupert describing Angus as a “shagger of wee beasties” to Claire. Their depth of despair over Willie’s marriage was comical after they finally let us know he had not actually died. Rupert and Angus were there for each other, and for Jamie and Claire, until Angus’ agonizing death scene. We all mourned with Rupert and understood the depth of his loss as he mustered all his strength to retrieve his friend’s sword. (I hope we’ll see a similar Season 4 connection between Fergus and Young Ian.) 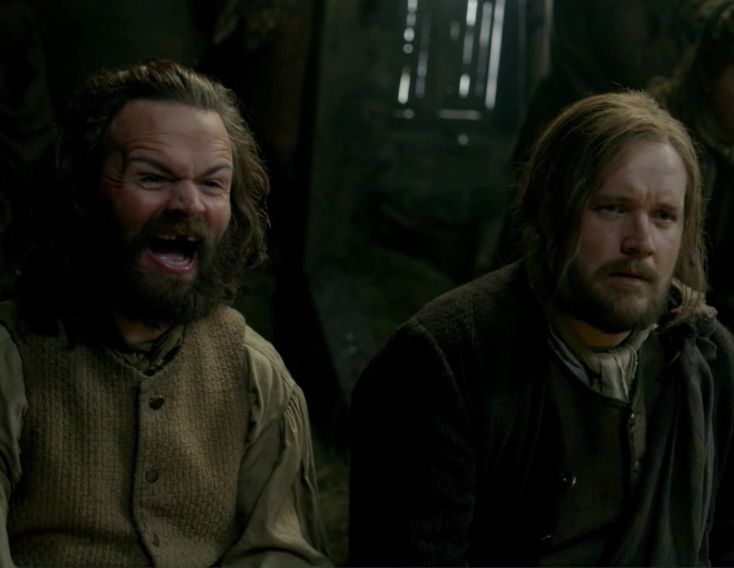 Then there’s Jamie, God bless him, the Highlander who oozes chemistry! He “gets” and “clicks with” almost every other character, like a key opening a lock, amirite? [Notable exception: BJR!] It’s Claire, though, who wins his heart. 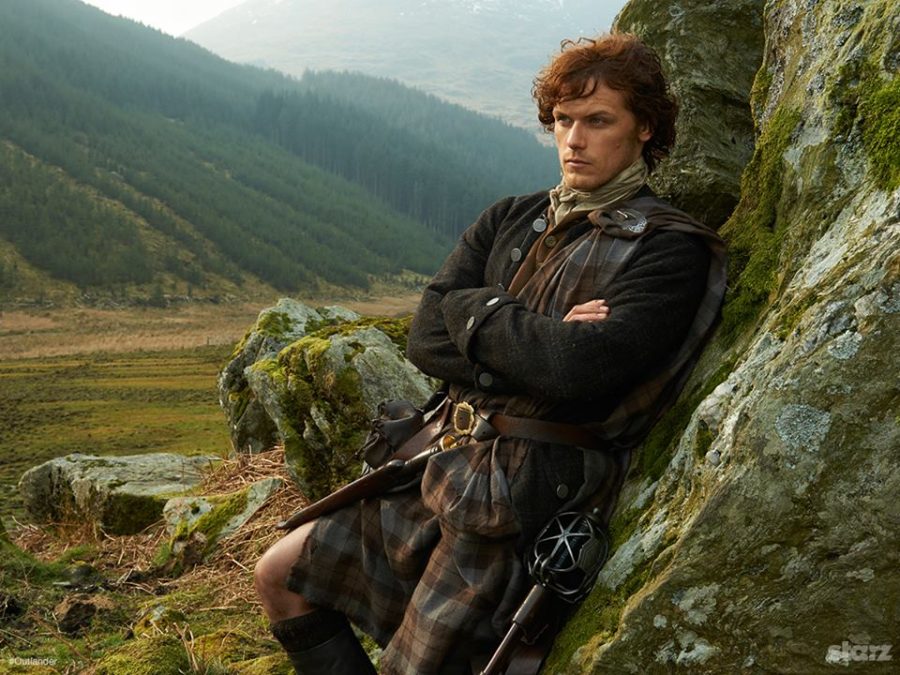 I felt the need to conduct research to help me better understand Outlander chemistry (you’re surprised, right!?). So I watched the first few episodes—again—then moved to cherry-picking, focusing on scenes as they came to mind. Here’s what I found, starting with our burning hot main characters.

All Obsessenachs, book readers and show watchers alike will likely agree that our Outlander TV series obsession is nourished by the strong onscreen connection between Sam and Caitriona. As Ron D. Moore says in reference to their initial chemistry test, “There is definitely on-camera chemistry between the two.” #understatement #allthefeels

Much has been written and said by many about this truly iconic Outlander duo with all_the_chemistry. Countless bloggers have paid tribute to them (#guilty), YouTube videos of Jamie and Claire’s romantic moments have been set to contemporary music by adoring fans, and interviews with the actors have provided insight into their creative processes that make them so believable in their roles. Like the Amber Run song goes, these two characters “found love where it wasn’t supposed to be.” 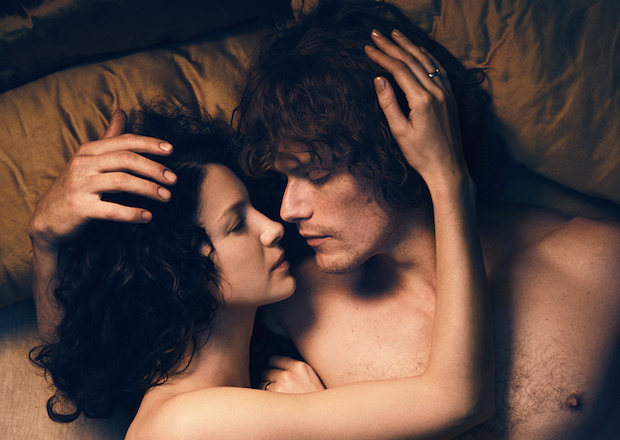 Not unlike what Ron saw in that chemistry test, we saw the sparks fly between Jamie and Claire at the very beginning. There was an invisible, unspoken, mysterious form of communication happening just below their first nods of assent and spoken words. Throughout Seasons 1-3, there are all the too-big-to-miss moments that reveal their chemistry, many with a fireside setting like their first meet-cute. Castle Leoch, the wedding night, and THAT campfire near Craigh na Dun—all were breathtaking. Then there’s the surgery, stones, print shop and brothel scenes. I could go on, but you know them all well I am sure.

As I usually do when conducting “research,” I found things I’d missed in the first few times I’d watched, some one-sided and some mutual, but all signs of a chemical reaction. Maybe you caught them…

Claire fought gallantly against the chemistry, trying her best to stay true to the husband she left behind in the future, but it was a losing battle. Neither she nor Jamie could deny their chemistry and it turned into a truly timeless connection. With the Frasers, it isn’t usual and it never stops. 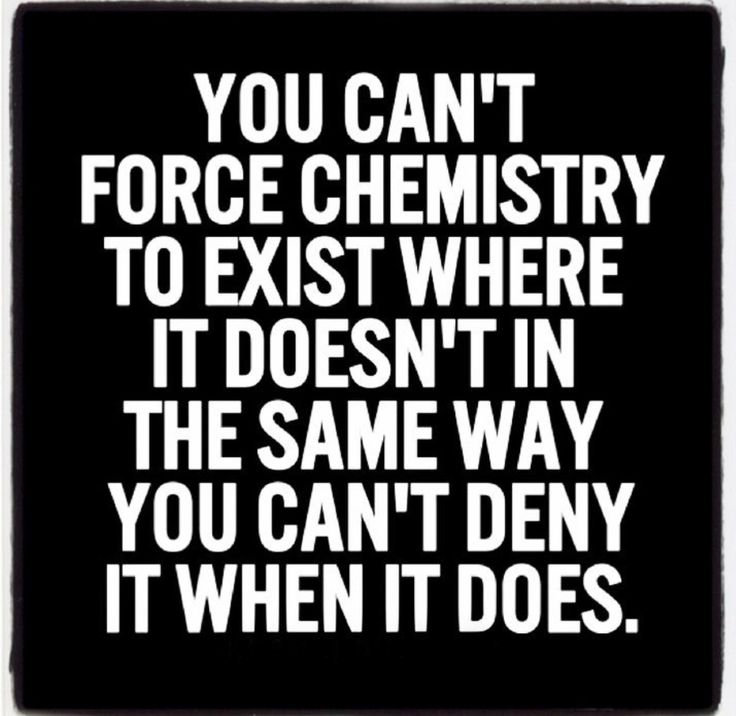 Jamie’s sister and her husband Ian likely knew each other well before they married. By the time we met them, their honeymoon was long over and their strong chemistry had simmered into one of those deep, fulfilling, long-term relationships. We know they still have it, though. I caught a peck on the cheek for Ian as he delivered the mail to Jenny. Like Jamie, Jenny’s the fiery one (Jenny, you shite-pot-stirrer, you), and Ian’s the truth-telling rock. Still waters run deep, ye ken. 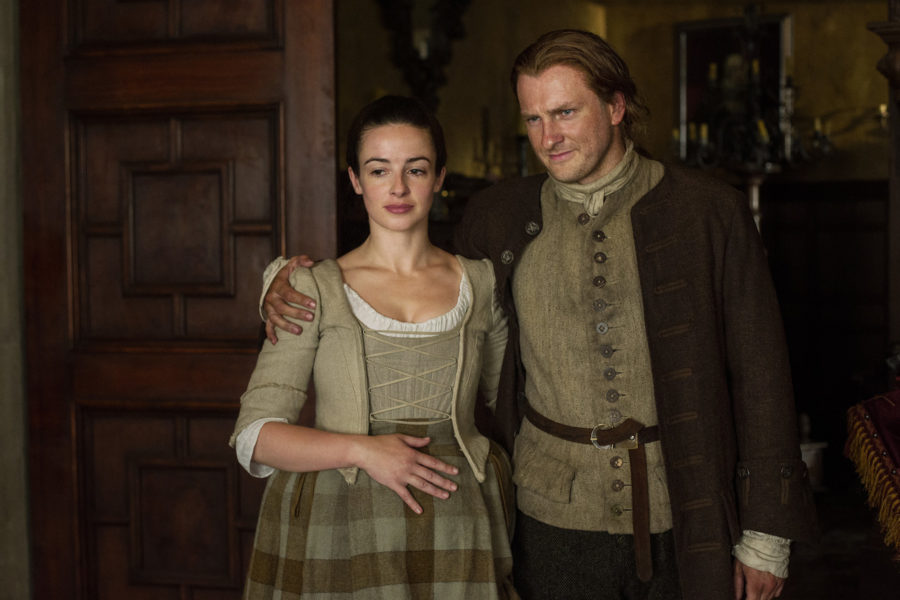 Love, love, love Laura Donnelly and Steven Cree in these roles. BTW, if you haven’t followed him, Steven is a riot on Twitter.

New Kids on the Block

Marsali and Fergus, the Frasers 2.0, land pretty high up on the chemistry scale even if their story is just beginning. Marsali is another strong and fiery female and I’m excited to see how she and Fergus navigate life with the OG Frasers in the Colonies. Lauren Lyle and Cèsar Domboy have stepped seamlessly into these roles, don’t you agree? #teamfersali 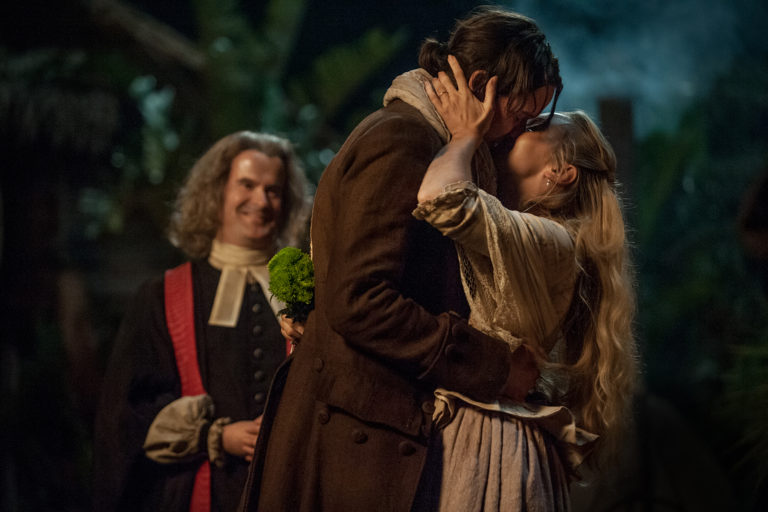 Bree and Roger, well, hmm. I know many of you are on the fence about Sophie Skelton but I can’t imagine anyone else in that role now and Richard Rankin is perfection as Roger. I have my fingers crossed that their onscreen chemistry will continue to amp up in Season 4. The two scenes that give me hope are (1) when they discussed payment for her fixing his car and (2) their Christmas kiss, after Claire leaves for Scotland to return to Jamie. 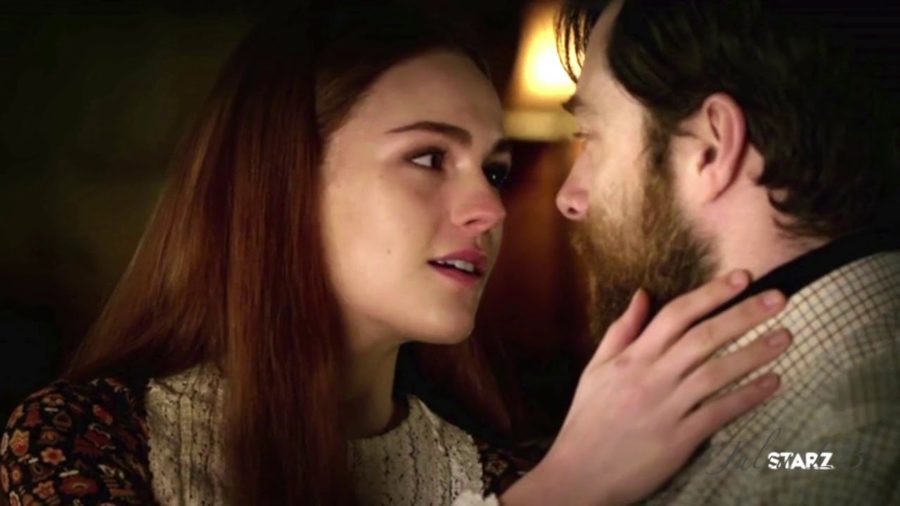 I’ll end with a quote from Robin Scherbatsky in How I Met Your Mother. “If you have chemistry, you only need one other thing – timing. But timing is a b**ch.” Chemistry, may we all find it and at just the right time.

How do you define chemistry?
All my chemistry stories are inventively embedded in this post.
Do you have a real or hypothetical chemistry story to share?