How They Made It: Baking Bannocks in Outlander at Castle Leoch

Welcome to our occasional series, “How They Made It.” We’re baking bannocks the way Mrs. Fitz in Outlander would, then updating them to the present day.

I had never heard of bannocks prior to discovering Outlander, but once I had I was intrigued. How did they taste? Little did I know the can of…uhm…oats I had just opened! It seems there are as many recipes for bannocks as there are cooks, and not just Scottish cooks neither. Bannocks are claimed by the First Nations peoples of Canada among others, and almost every cuisine around the world makes some form of a flat grain-based bread. I explored bannocks early on in my own blog, Scotch & Scones, from the perspective of what they were and how I could tweak the recipe a little (for the record, I used unfed sourdough starter as a base). For our purposes here I want to explore the difference between how bannocks would have been made at Castle Leoch and how they’re made today. Let the “Battle of the Bannocks” begin!

[Side note…I like alliteration. Remember the Great Butter Bake-Off Battle where we compared shortbread made with US vs. Irish butter? Me, too. Good times.] 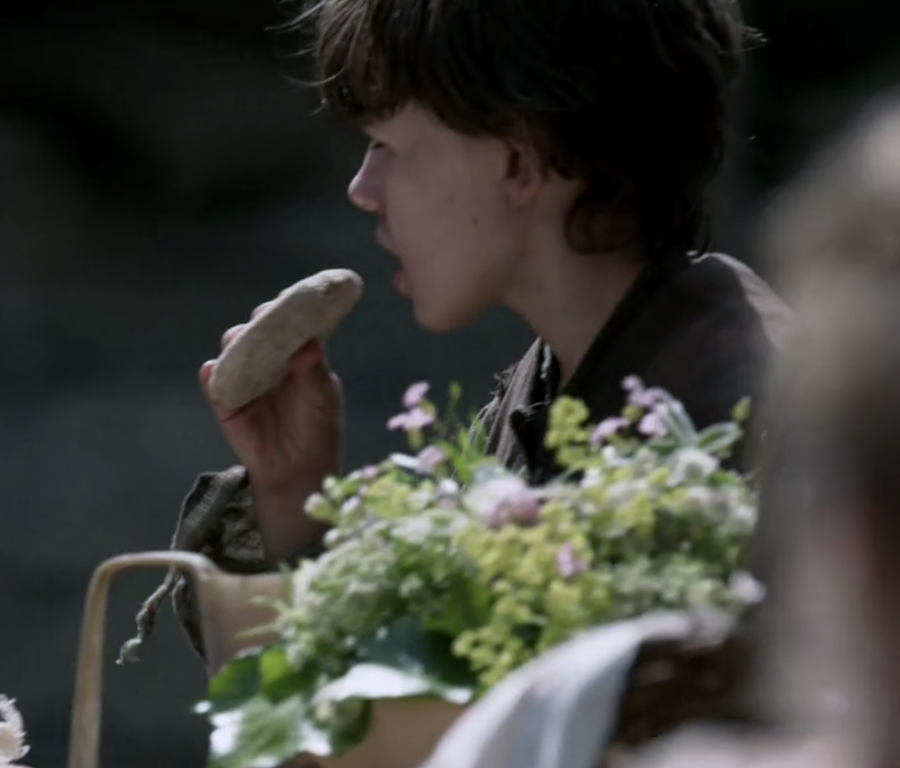 As I was saying, there are many, many bannock recipes, and it’s hard for this California girl to know which would produce an authentic 18th century Scottish bannock (the type Mrs. Fitz would have made), let alone a modern version. Most of the recipes I found online used some form of leavening (usually baking powder), which I didn’t think would have been around then.

Also, are bannocks supposed to be hard, thin, and brittle? Soft, thick and chewy? Somewhere in between? Looking at the picture above from Season 1 Episode 9 (and yes, I know it’s Lallybroch instead of Castle Leoch, but it’s the example from the show that I found), a bannock looked like the size of a large cookie, and was thick as well.

Lots of online recipes, however, described something thinner and smaller. Thoroughly confused, I decided to use Outlander Kitchen’s recipe for Jocasta’s “Auld Country” Scottish Bannocks simply because Theresa Carle-Sanders did her homework, and she said that this version would be something Jocasta Cameron (née MacKenzie) would have eaten when she was at Leoch.

For a modern take, I settled on the recipe from The Guardian’s How to cook the perfect oatcakes because Felicity Cloake compared all the factors that go into a good oatcake and distilled them into a single recipe.

A note about terminology

Even Claire mentioned that “Britain and America are two nations divided by a common language,” and I realized that comment applied here as well. In the US, “oatmeal” refers to rolled or steamed oats, the stuff with which you make, well, oatmeal. When I made bannocks for that Scotch & Scones post I mentioned previously, that’s what I used — whole rolled oats.

However, while researching this post, I realized that in Britain “oatmeal” refers to “oat flour,” i.e. ground up oats (that would explain why my previous attempts at bannocks were so chewy!). Rolled or steamed oats are called “porridge oats” in Britain, and our “steel-cut oats” are “pinhead oats” there.

The sum total of this realization was that I needed to grind up the rolled oats I used into a sort of flour before making the bannocks. The things you learn…

As always, I’ll note in italics my comments and any changes I made to the recipes.

Bannocks from the 18th century 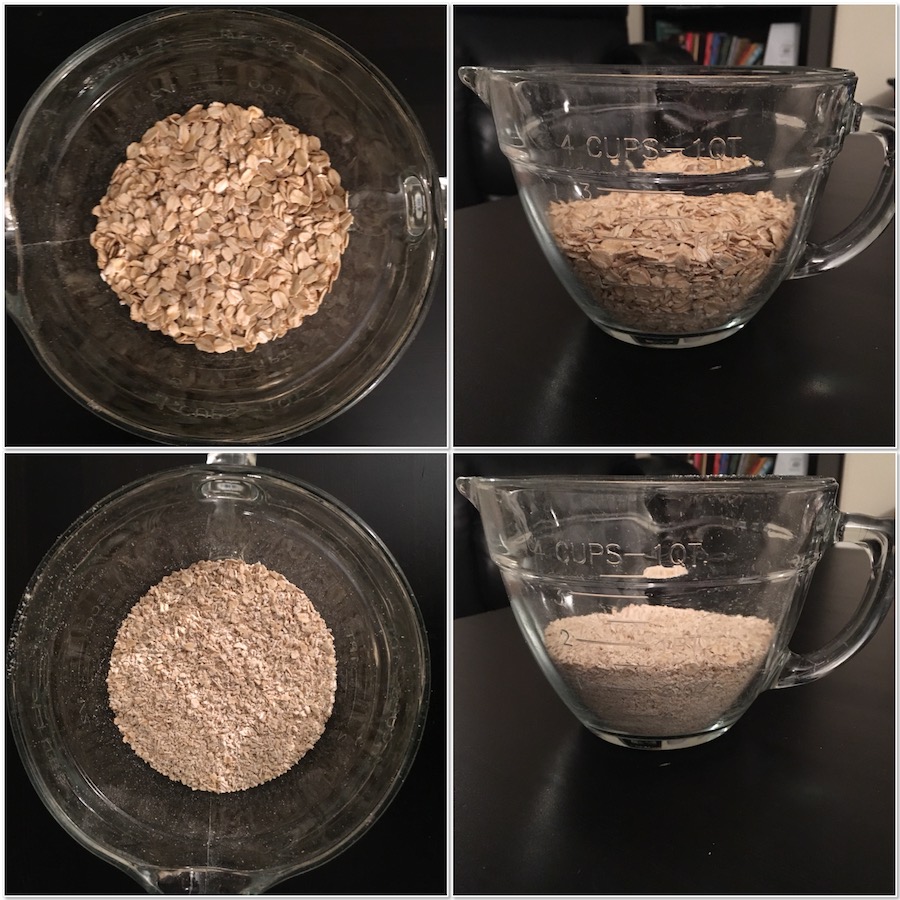 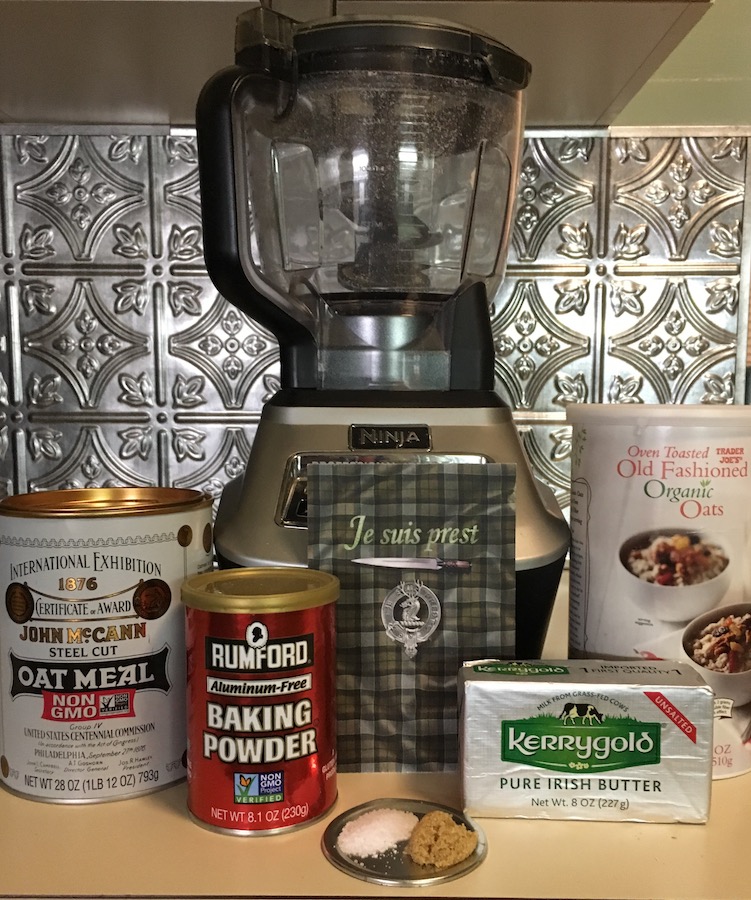 The ingredients that go into the humble bannock

(Side Note: After this post was written, Theresa Carle-Sanders updated her online version of Jocasta’s “Auld Country” Scottish Bannocks to reflect the recipe published in her Outlander Kitchen cookbook, changing some of the ingredient amounts and the procedure to make the bannocks. I’ll leave you to decide which version to make…I’ll stick with biscuit method myself.) 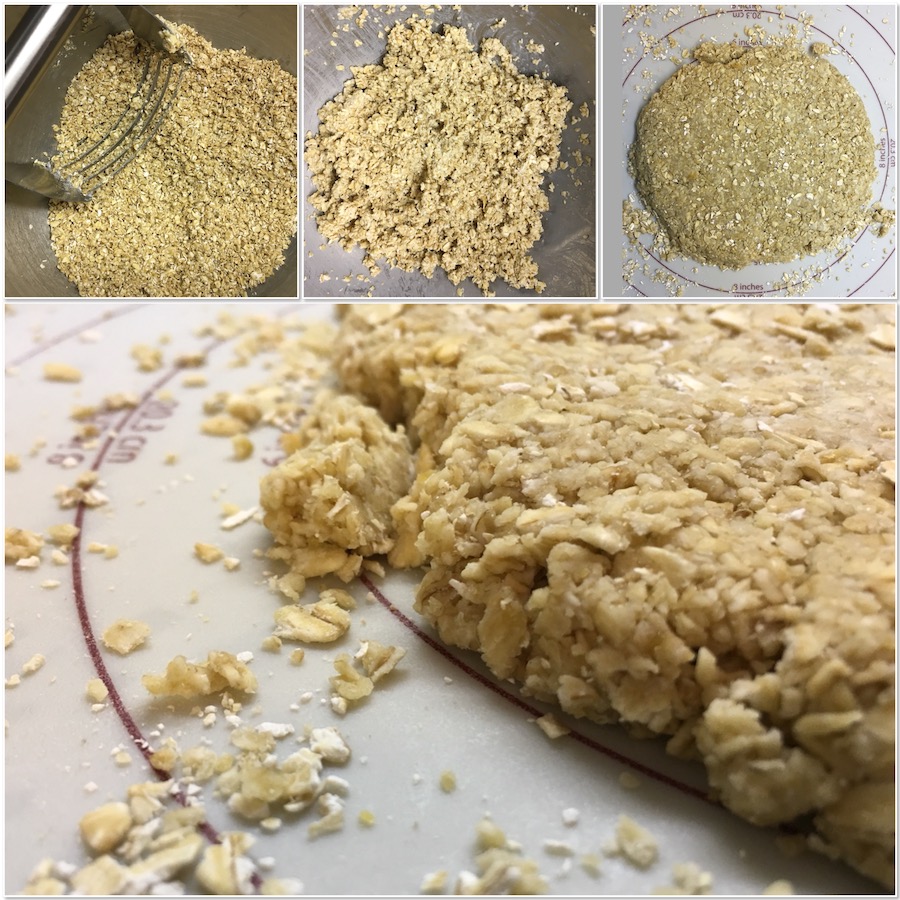 Mixing up a batch of bannocks ala Mrs. Fitz (does that dough look right to you?) 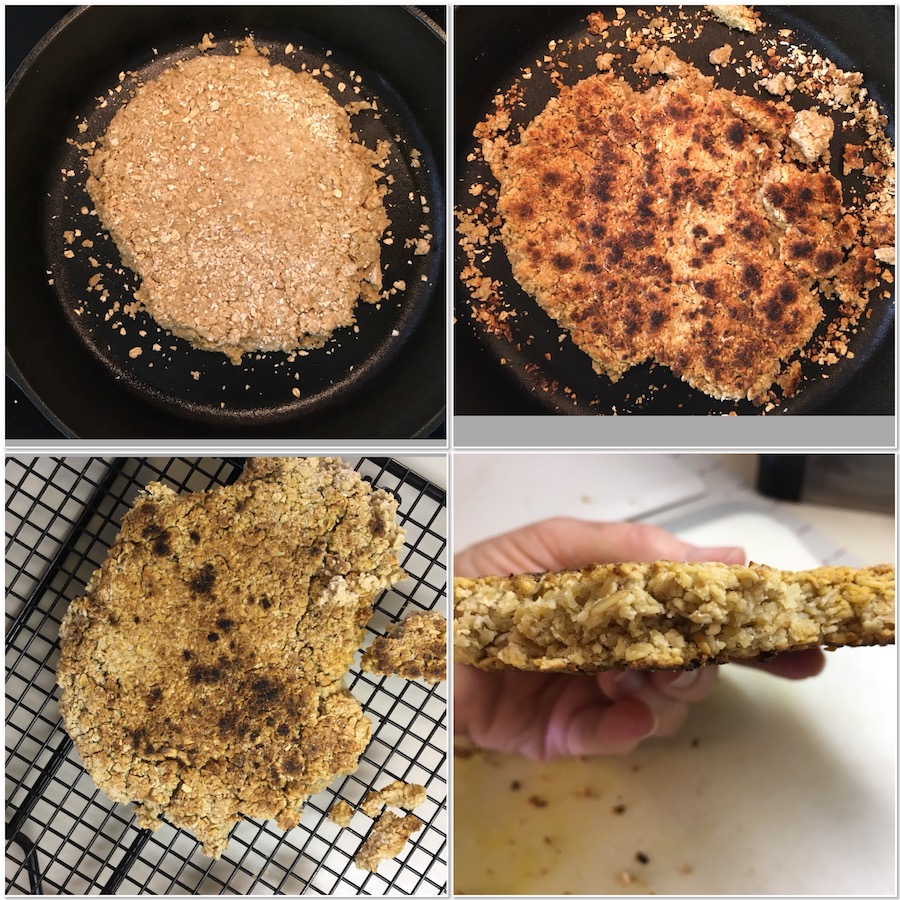 Cooking the bannocks on the stove…is it a bannock or just a burnt blob?

The making of a modern bannock 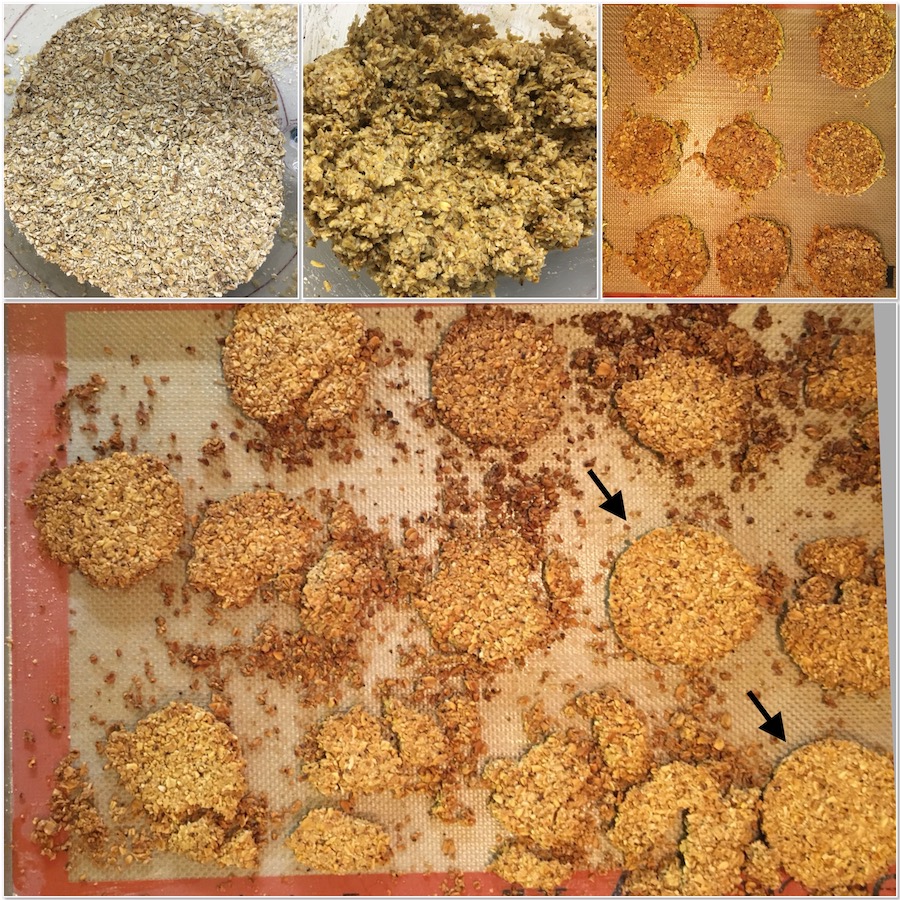 The making of a modern bannock (top row) lead to baked…crumbly stuff. Oh wait, there were a couple that survived!

Again, I want to stipulate for the court that I haven’t eaten bannocks in Britain, so I don’t know how they should taste…I’m just going by the pictures I’ve seen.

Tasting the vintage recipe bannocks, the outside was firm, the inside was less so (although I don’t know if that meant I undercooked them). They held together (a definite plus), were bland at first but then the salt kicked in and I could taste the butter. Overall, I like the texture better using ground rolled oats than the way I made them in the past.

As for the modern recipe version, the couple that survived baking almost intact were crumbly, nutty, slightly sweet, with a crunchy texture from the pinhead/steel cut oats…in other words, really tasty. However, while the flavor was definitely more pronounced, their lack of any cohesion was a disappointment. Maybe making them thicker and using more water would have helped? I’m not sure. I did find a use for them though (see the picture below). 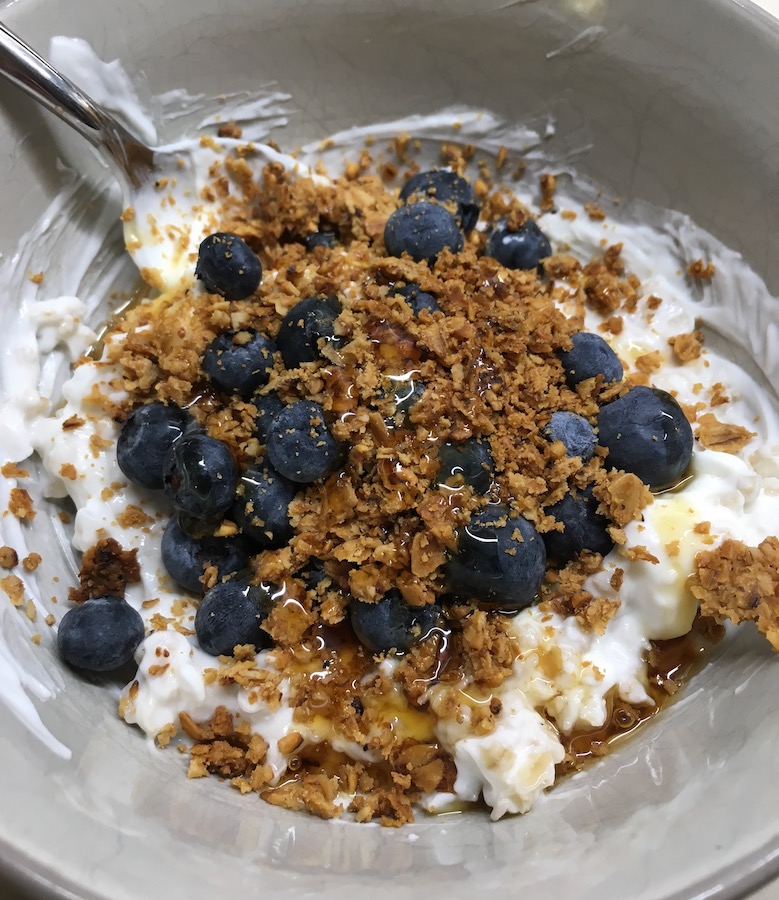 Bannock crumbles as part of this nutritious breakfast of yogurt, blueberries, and maple syrup 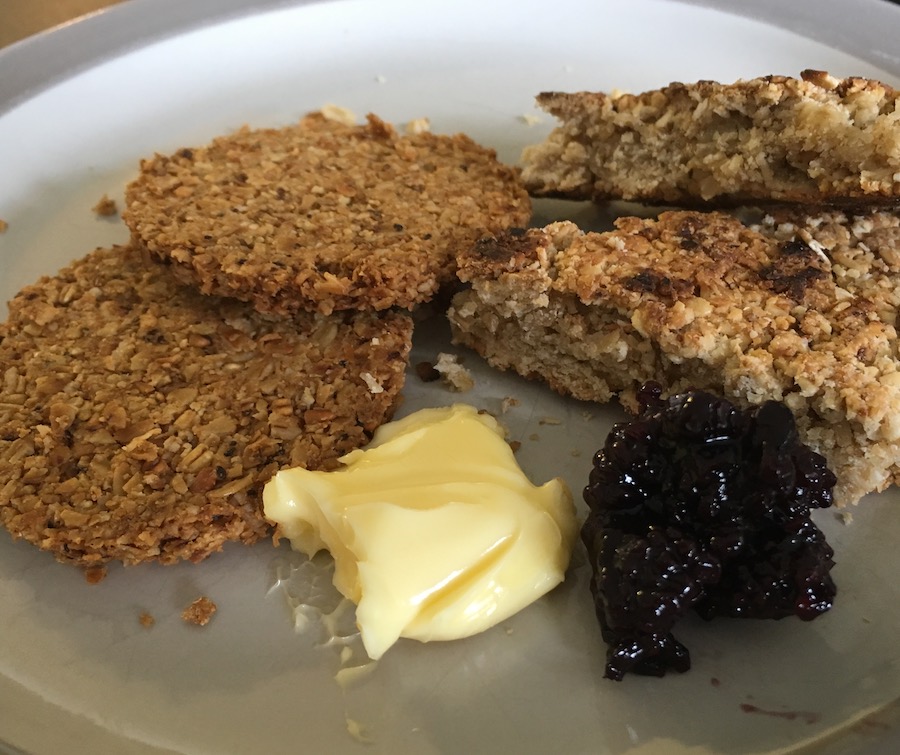 Side by side, which bannock will emerge the victor?

So for me at least the winner of the “Battle of the Bannocks” definitely went to Mrs. Fitz and Outlander Kitchen. I could see putting these bannocks in a saddlebag and heading out to collect rent (assuming I could get the shape right). Their lack of overt flavor lent them to feature the butter and jam with which I tasted them, and I could also see eating them with smoked salmon and blue cheese. Maybe the next time the modern bannocks will come out better because that toasted flavor was really nice. I’m open to suggestions on how to up my bannock-baking game…just remember the language barrier!

Do you have a time-honored recipe for bannocks? A fool-proof technique for keeping the dough together? What do you eat bannocks with? So many questions…hope you’ll answer below so we all can learn! 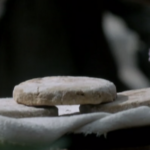 I didn’t have any barley, so I omitted it and doubled the amount of rolled oats. I struggled with whether I should use milk or not because many of the modern recipes I saw used water instead. I finally decided to use it, reasoning that Mrs. Fitz would have milk on hand (i.e. not saved it for drinking), and she also wouldn’t necessarily have had clean water available. Did you make this recipe? Please share your pictures with the world on your social media…tag @outlandercast (on Instagram and Twitter) and use the hashtag #howtheymadeitoutlander. I can’t wait to see your creations! 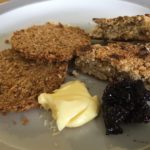 I ran out of rolled oats, but I figured that my makeshift oat flour was coarse enough to get the intended texture. The baking powder was my addition as many recipes called for it and I wanted to see if it made any difference. It didn’t. There was way more butter than the previous recipe, but I reasoned it was because we weren’t using milk. Did you make this recipe? Please share your pictures with the world on your social media…tag @outlandercast (on Instagram and Twitter) and use the hashtag #howtheymadeitoutlander. I can’t wait to see your creations!