How They Made It: Making Cranachan with Mrs. Graham

Welcome to our occasional series, “How They Made It.” We’re clinging to the final days of summer and its plentiful array of fresh berries by making Cranachan with Mrs. Graham.

Well, for one thing, I love summer for its large array of available fruit, like peaches, apricots, cherries, and berries. Eating them out of hand is a sure-fire treat, but I love to use fresh fruits in baking and desserts…pies, tarts, cobblers, and shortcakes are all favorites of mine.

Cranachan (pronounced “CRAH-nuh-kun” according to The Case for Cranachan, an article I found on the Whiski Rooms website) is another way to use fresh berries. It’s a confection of whipped cream, mashed berries, and toasted oats, all sweetened with honey and spiked with whisky (as any good Scottish dish should be).

Making Cranachan isn’t hard at all, the wonderful taste belying the simplicity of the dish.

The History of Cranachan

The history of Cranachan is lost to the mists of time (or at least to the mists of the Interwebs as I couldn’t find when it came into being). I do know that this dish is very old, and was originally called “Cream Crowdie” after the crowdie cheese used to make it (crowdie is a soft cheese similar to ricotta or cottage cheese). Cream Crowdie, served at breakfast, was made with layers of crowdie, toasted oats, cream, and honey…raspberries were added when they were in season.

When whisky was added to the recipe I don’t know, although hopefully not for breakfast for the kiddies! Layered like a trifle, Cranachan is usually served for special occasions like Hogmanay or Burns Night Dinners. I can imagine this lovely dish being served at any of the time periods of Outlander, but the image in my head of wee Roger sitting with the Reverend & Mrs. Graham with whipped cream all over his face captured my fancy so I decided set this recipe in the 1940s.

Why did I settle on making Cranachan in the first place?

Well, besides the fresh raspberries I saw at the Farmers’ Market, I had toasted oats in my freezer in the form of bannock crumbs. When I ran across this Cranachan recipe from Christina’s Cucina, I thought, “Aha! Glad I saved those bannock crumbs!”

(My next thought was, “now when are you going to use those frozen chicken bones and leek tops taking up freezer space?”) 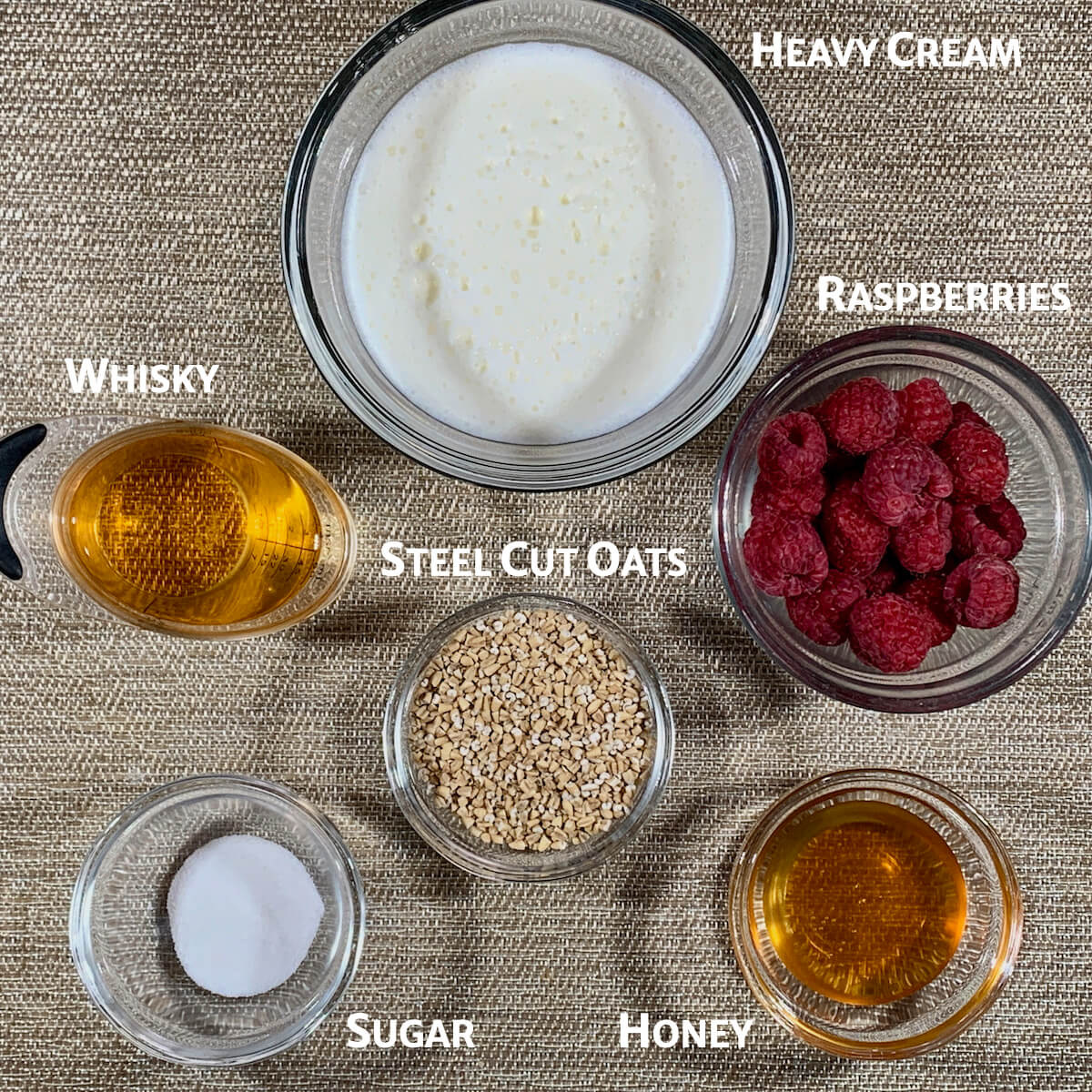 Use a good quality scotch when making Cranachan…I used Aberlour, a wonderful scotch from the Highlands of Scotland 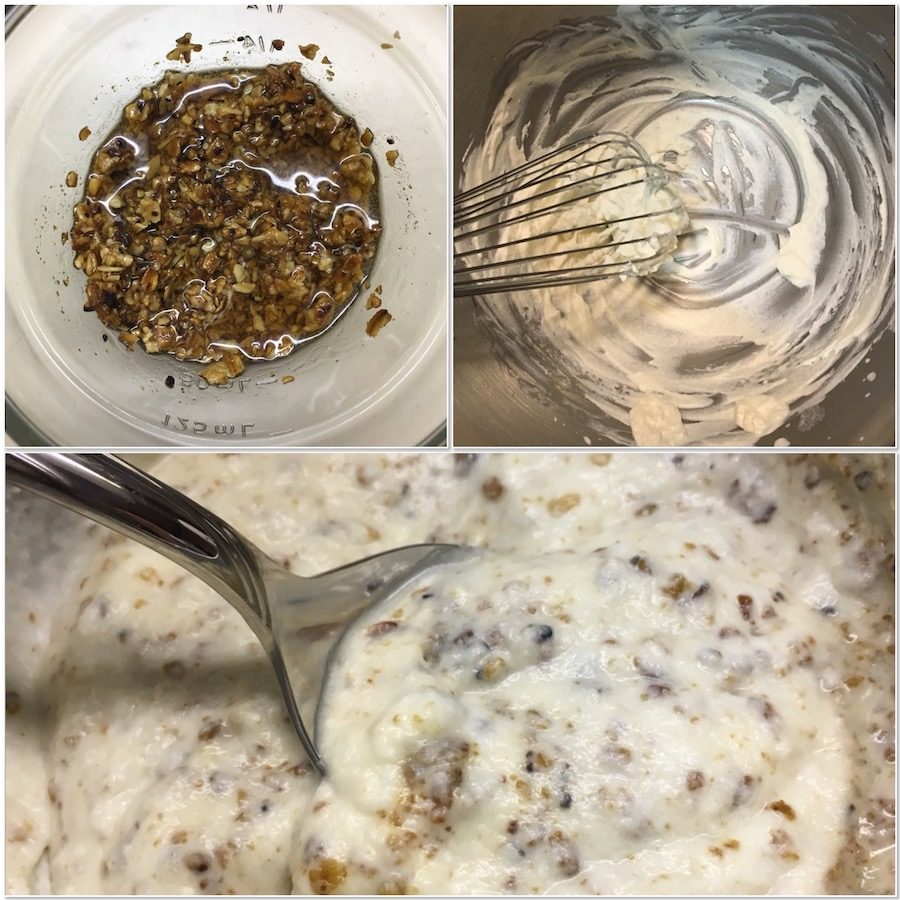 First time through…soaking the bannock crumbs, whipping the cream (a small amount in a large bowl), then mixing the two together (note the soft body of that whipped cream)

If at first you don’t succeed…

I ended up making Cranachan twice, and there were two reasons why. First, I had a bit of a mishap on Step 6. My older daughter was helping me whip the cream (she likes to do this by hand). When it was time to add the granulated sugar specified in the recipe and the scotch at the soft peak stage, she forgot to include the honey. As she continued to whip, the added liquid from the scotch caused the whipped cream to break a bit (my theory is that the honey counteracts this from happening).

It still tasted good, though it had a softer body than proper whipped cream. We then folded in the scotch-soaked bannock crumbs to the whipped cream, then layered the dessert as indicated.

Here’s where the second reason came in. I had used too heavy a hand adding the scotch (remember, it’s in the bannock crumbs, the raspberries and the whipped cream), plus I had used cask strength whisky. For those that don’t know, that’s scotch that hasn’t been diluted to bring down the alcohol content. This ended up as a dram in a dessert – too strong even for me! 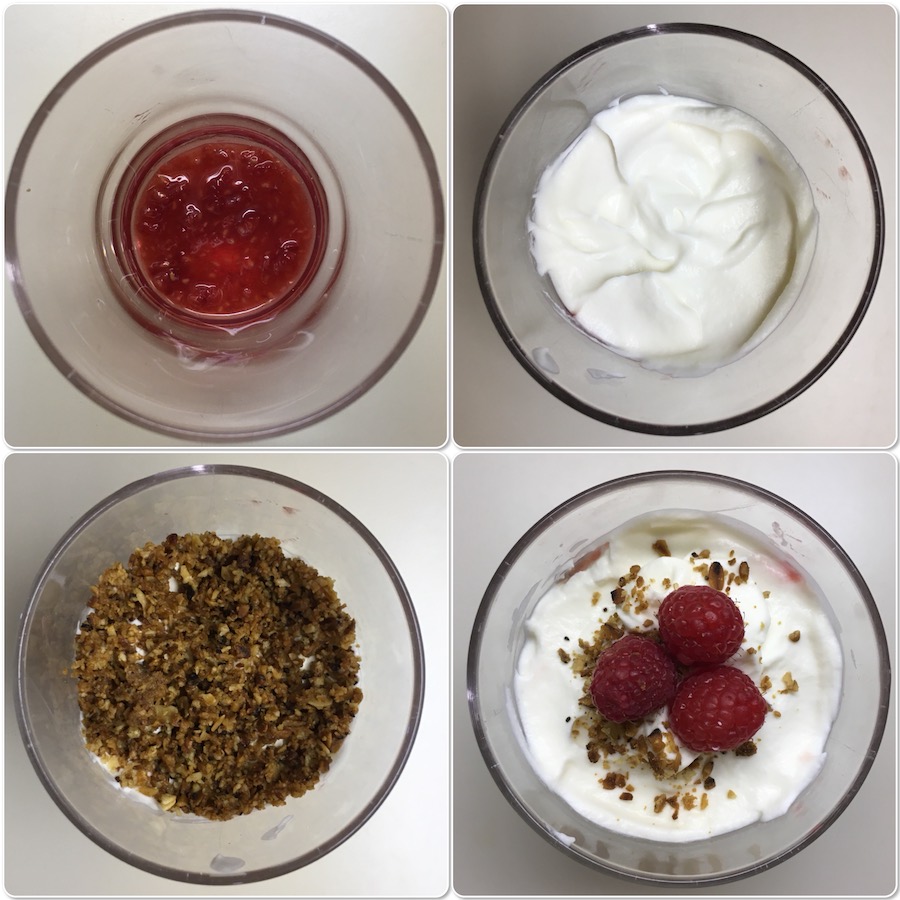 Here’s Cranachan 2.0 as it’s being layered

On the second try, I whipped cream in the blender for 30 seconds, then added powdered sugar and honey and whipped again to stiff peak, and this method worked much better.

I also toned down the scotch by adding a bit of water, then tasted each component as I went to make sure I didn’t overdo it again.

I did get distracted talking to my younger daughter on the phone and forgot to mix in the soaked bannock crumbs into the whipped cream, but no matter, I just ended up layering the Cranachan like a trifle.

This version was delightful! Creamy, sweet (but not overly so), lightly textured and spiked just right. Jackpot! 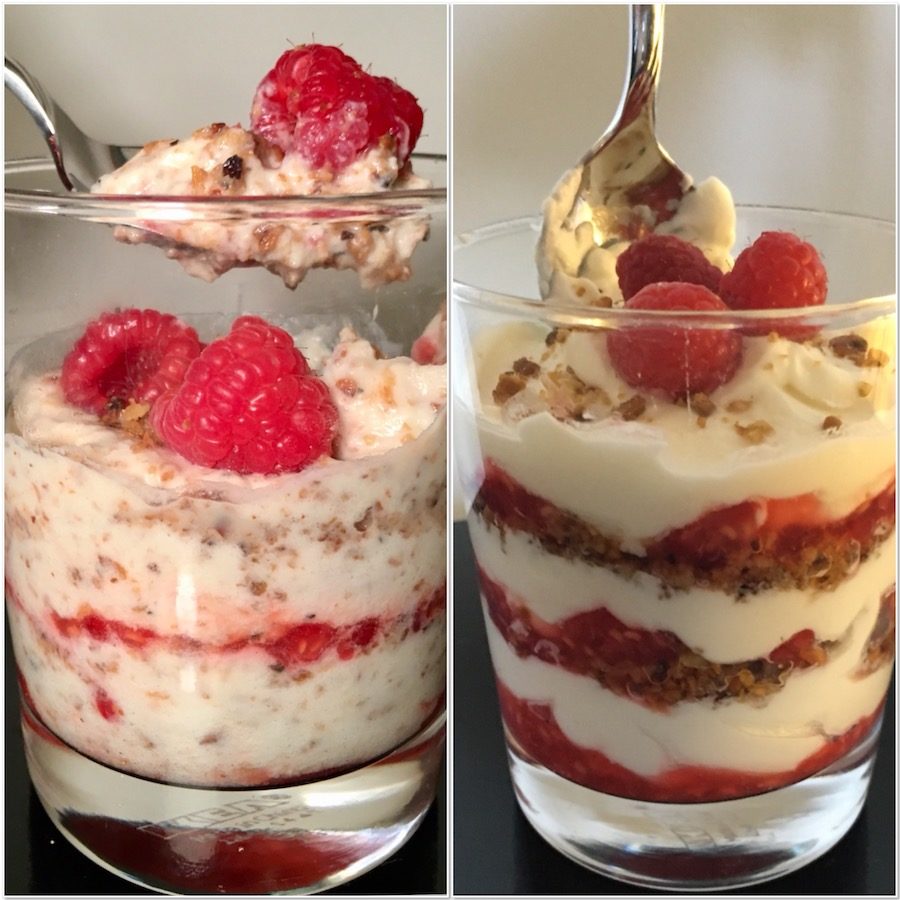 First try on the left, second on the right. Both tasted yummy, but Cranachan 2.0 was the clear winner

I encourage you to try this dessert, hopefully avoiding the pitfalls I encountered. Don’t wait for a special occasion… celebrate the final days of summer! That’s all the occasion I need. How about you?

Have you heard of or tasted Cranachan before? What was the occasion? Do you have a special way to prepare and serve it? 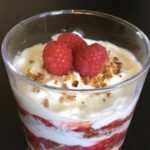 Choose a scotch you like to drink. It can be single malt or blended, cask strength or not. It all depends on how strong you want the Cranachan to be. You can toast the oats, macerate the raspberries, and make the whipped cream ahead of time, but try to assemble the desserts as close to serving time as possible.  Did you make this recipe? Please share your pictures with the world on your social media…tag @outlandercast (on Instagram and Twitter) and use the hashtag #howtheymadeitoutlander. I can’t wait to see your creations!