How They Made It: Black Bun for Hogmanay at Lallybroch

Welcome back to our occasional series, “How They Made It,” where we explore the food and drink of Outlander. Let’s take a look at Black Bun, a traditional dish at Hogmanay. Slainté!

One of the things I love about loving Outlander is that I learn so much about Scottish traditions and the food associated with them. I had never heard of Hogmanay or first footing before I read the books, and the show gives us nice glimpses into how those traditions would look, taste, and sound. In the title card for the Outlander Season 3 Episode “First Wife,” we got a shot of a table laden with food, and someone loading up a plate of figs held by the adorable Joannie McKimmie (presumably to be taken to Jamie before enticing him to dance). The camera pans in on an interesting looking dish…what looks like a fruitcake wrapped in pastry. Well friends, you know me well enough by now to know that I would want to make a…uhm…whatever it was, and the hunt was on. Turns out that pastry is called Black Bun, a variation on the classic fruitcake that’s given during the first-footing ritual, and it’s a traditional dish that goes back a few centuries. 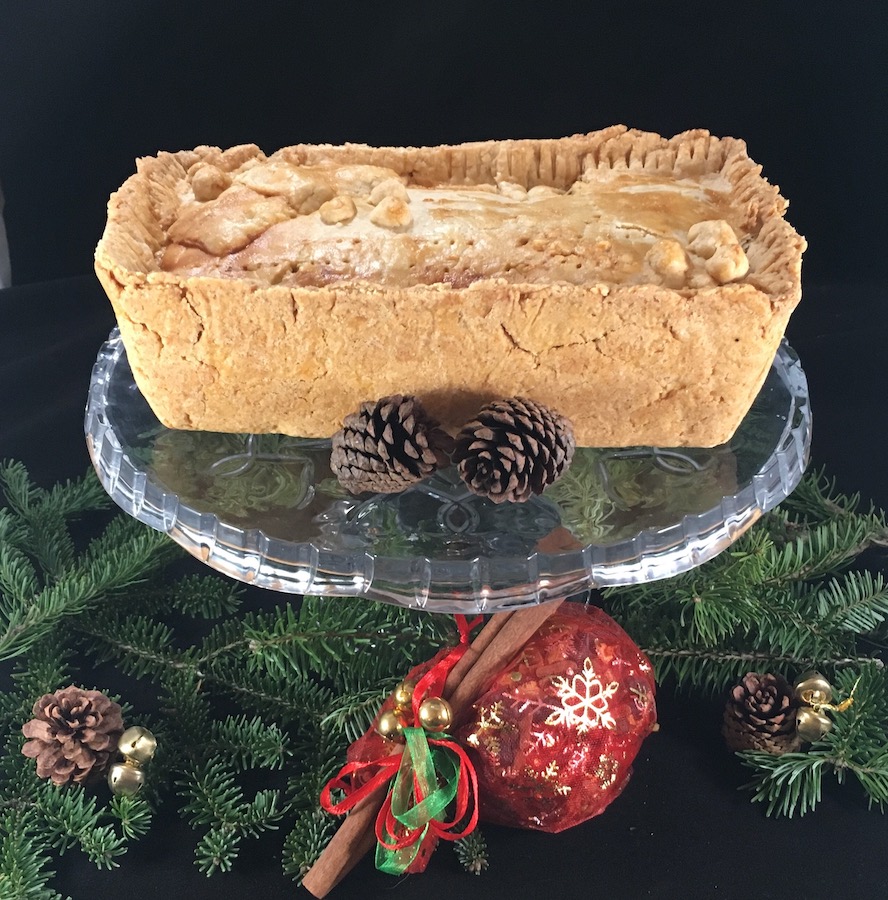 [Side note: here are a couple of quick definitions for the uninitiated…Hogmanay is the Scots word for the last day of the year, and is associated with New Year celebrations. First footing is “being the first person to cross the threshold of a friend or neighbor and often involves the giving of symbolic gifts such as salt (less common today), coal, shortbread, whisky, and black bun (a rich fruit cake), intended to bring different kinds of luck to the householder.” Source: Wikipedia. Don’t you feel well informed now?]

I found and adapted two recipes for Black Bun, one from BBC Food and the other from Ancestors in Aprons (which itself is an Americanized version of the BBC Food recipe). For the pastry crust that surrounds the cake, both recipes used a combination of butter and lard or shortening. Now, when I make a pie crust I use an all-butter crust. It’s a flavorful, flaky, and tender crust. (The addition of apple cider vinegar to tenderize the crust is my secret ingredient). However, I reasoned that since this crust needed to be sturdy enough to wrap around the fruitcake, I’d use the vegetable shortening version (normally something I never use, let alone have on hand. I just happened to have Crisco shortening around from when we made the homemade fondant for my daughter’s wedding cake). I also decided to put a New England spin on the fruitcake by using dried blueberries (from Maine) and dried cranberries (from Massachusetts) instead of the traditional currents (you know, to personalize it a bit). 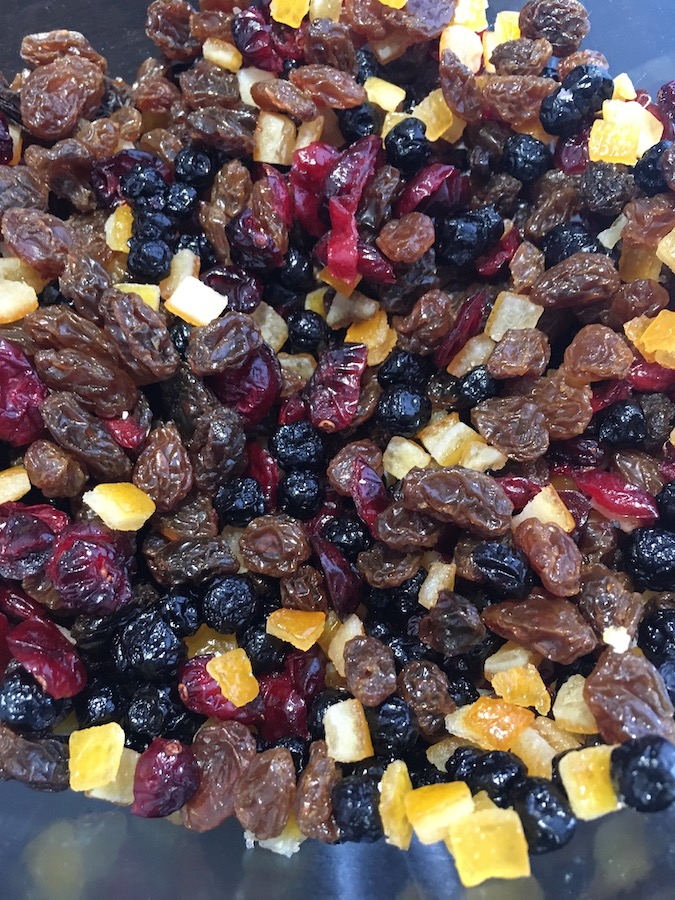 One other note before we head to the recipe: while the show used a Black Bun that looked very much like the ones pictured on the recipe, historically speaking a different method was used. According to Scotsman Food & Drink, “First a yeast leavened dough, enriched with butter, is made. Some of this dough is reserved for the outer casing, the rest is mixed with dried fruits and spices to form the filling. This method is more similar to that found in 18th century Scottish recipe books.” I debated if I wanted to be true to history or true to the show, and I finally decided that since this post is about Outlander, that’s the version I was going to make. For those interested, I’ve included the more historically accurate recipe below.

One other other note (Sheesh!): the pepper grinder I have for fresh peppercorns doesn’t do a terribly good job of…well…grinding up the black pepper. Since you don’t want chunks of black pepper in a sweet dessert, I pulled out my handy-dandy Outlander-themed mortar and pestle. I got it as a holiday gift when I first discovered the show, and I feel like Claire when I’m using it! 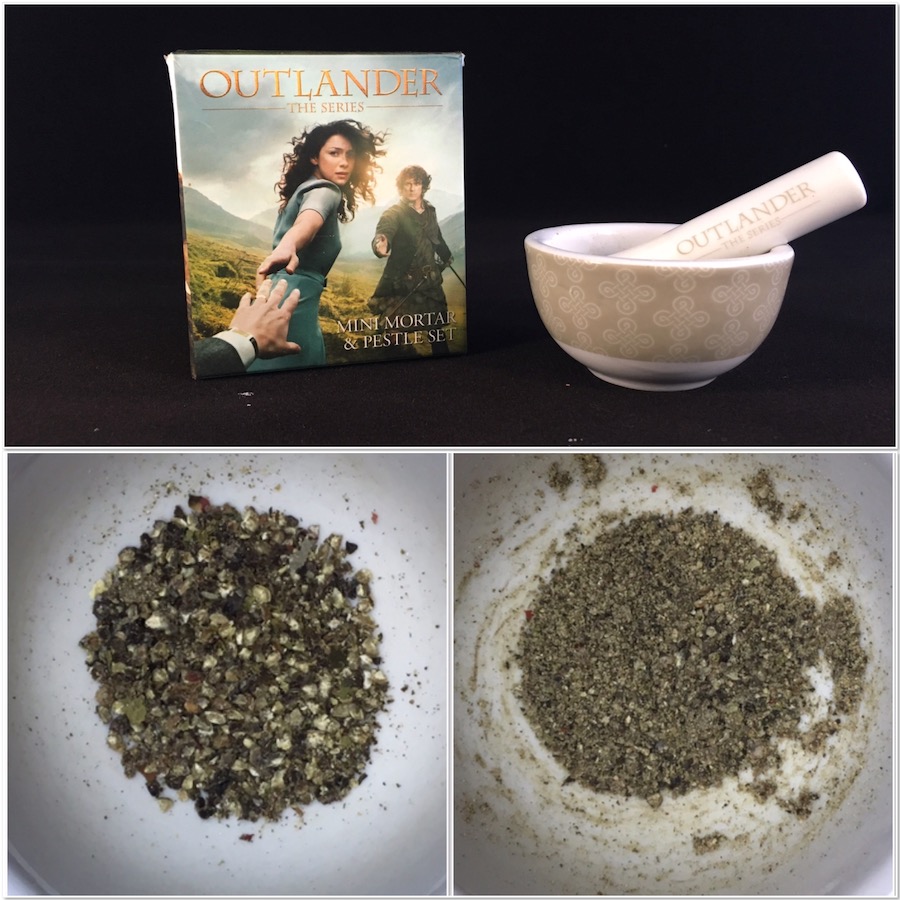 When you want finely ground pepper, pull out the mortar & pestle and get to work!

Enough blather…let’s bake some Black Bun! As per usual, my notes are in italics below. 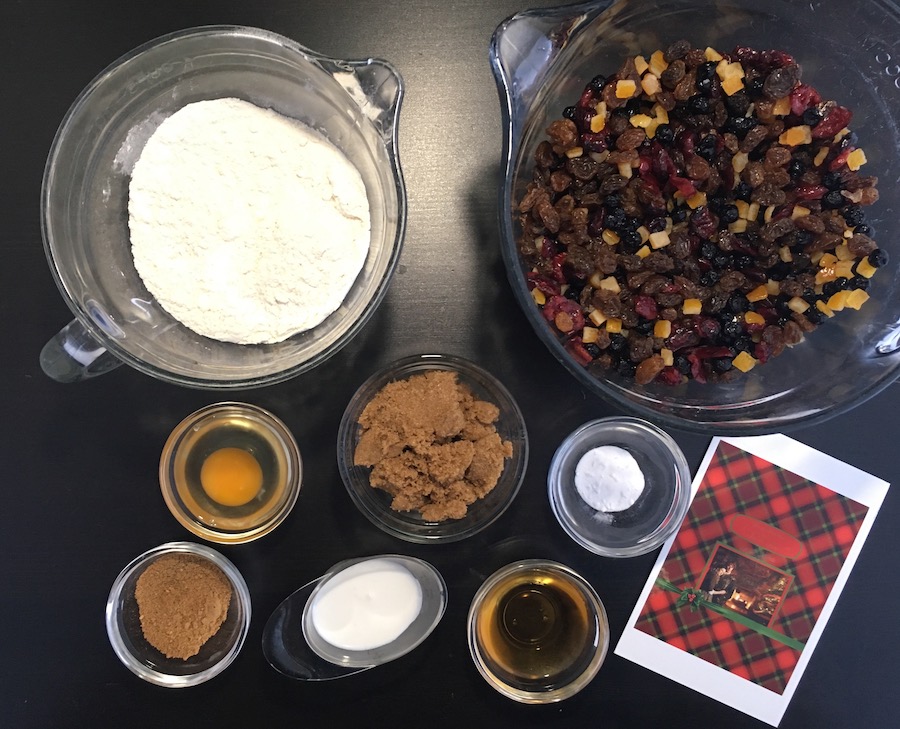 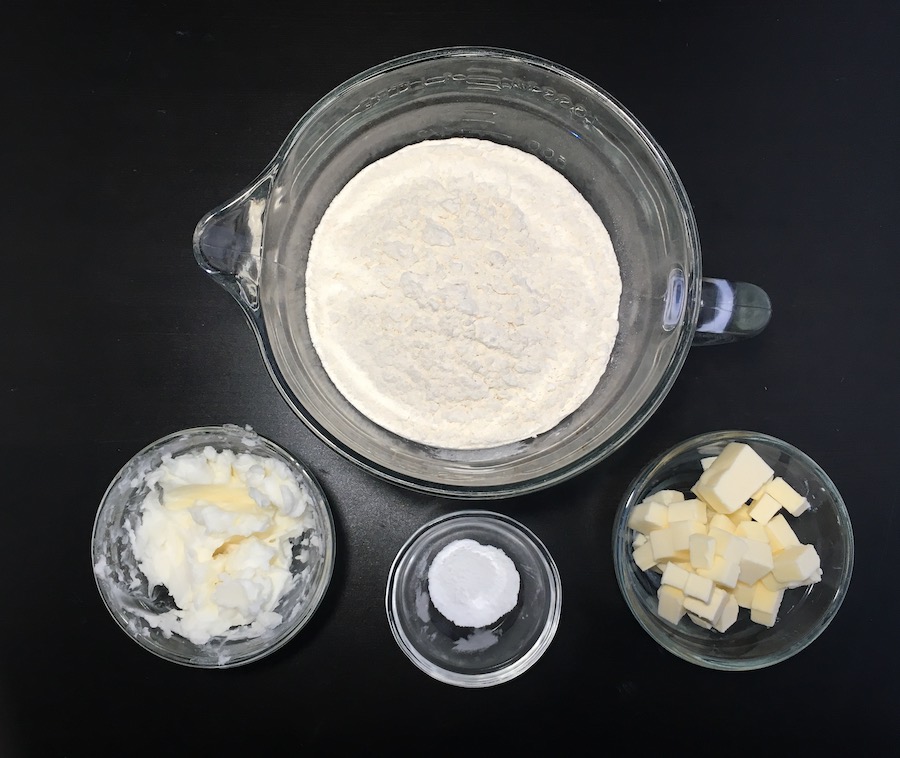 Pastry crust with butter and shortening

Assembling the Black Bun pastry…it’s a bit of work, I won’t lie. 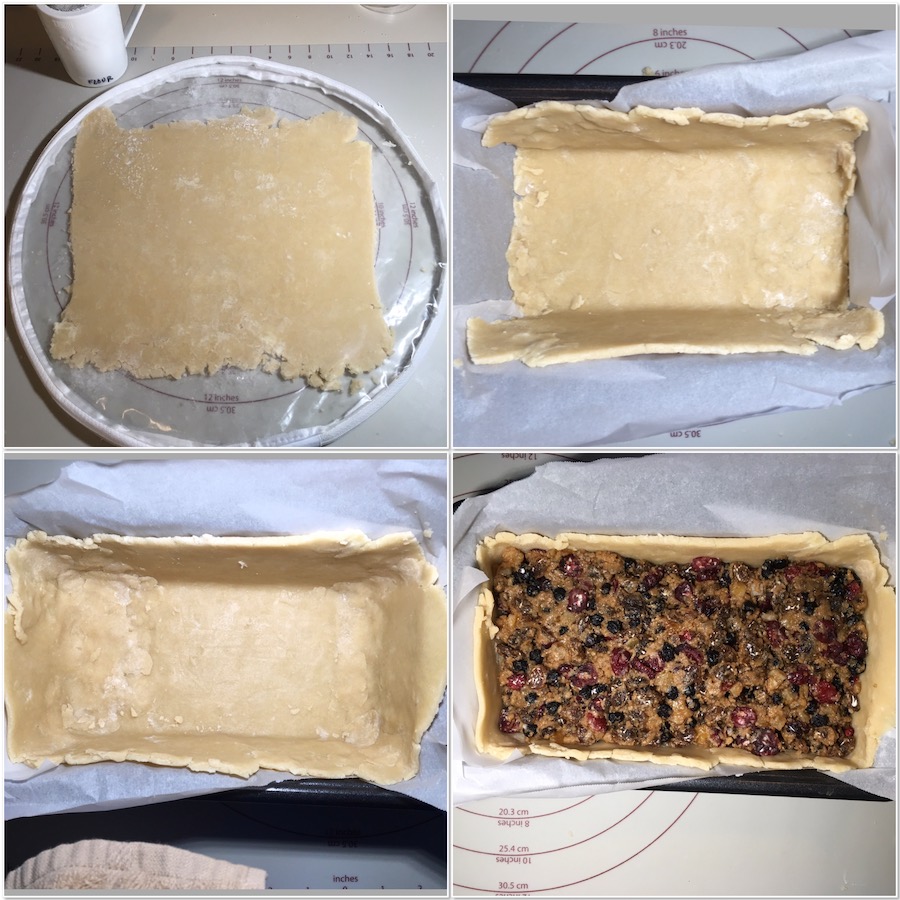 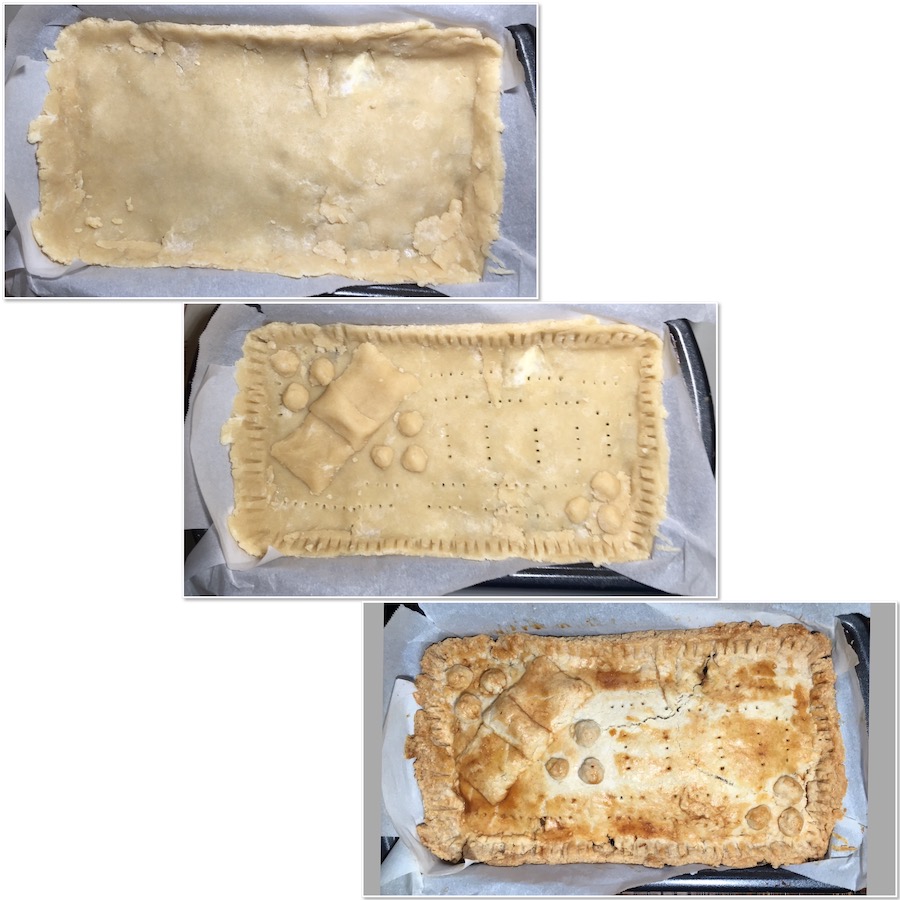 Black Bun before & after baking (don’t ask me about the decorations. I tried. I really tried) 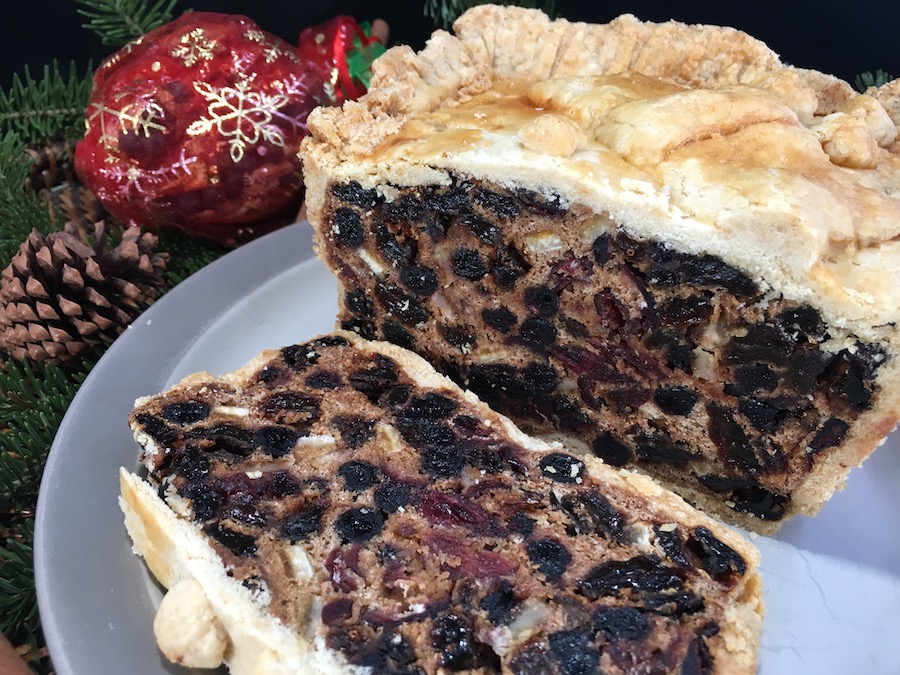 It’s good alone, but REALLY good with a drizzle of a good Highland scotch

Not quite knowing what to expect, the first time I tried a slice of Black Bun, the fruitcake component was good but seemed dry and a bit overpowered by the candied orange peel. I also wasn’t impressed with the pastry crust…it seemed dry and rather bland (I think next time I’d use the all butter crust). The next day the slice had a better balance between the dried fruits and the baking spices, and was really better when drizzled with 1 tsp of the Balvenie. There’s quite a lot of hassle in getting the crust into the loaf pan…I just can’t see Jenny or Mrs. Crook fussing that much. To me the historical recipe would be much easier to make. If you try either Black Bun recipe, please let me know how it goes. Whatever your New Year’s traditions, we at Outlander Cast wish you and yours a happy, healthy, and prosperous New Year!

Do you celebrate Hogmanay with a Black Bun? Which version do you bake or buy? 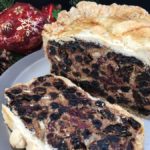 The original recipe called for 300g currents, but I wanted a New England twist to the dish, so I substituted them for dried blueberries & dried cranberries I used the Balvenie Double Wood 12 yr, an excellent scotch whisky from the Highlands The original recipe called for 3 Tbsp buttermilk, so you can use it instead. I don’t keep buttermilk on hand, so my sour cream hack is a reasonable substitution Did you make this recipe? Please share your pictures with the world on your social media…tag @outlandercast (on Instagram and Twitter) and use the hashtag #howtheymadeitoutlander. I can’t wait to see your creations! 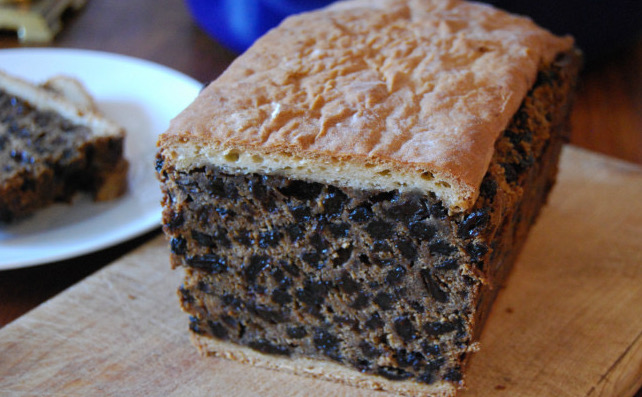 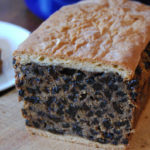 For the Sponge Dough

You can substitute brown sugar for the Muscovado sugar and light molasses for the treacle You can substitute any combination of dried fruits you wish. I won’t judge… Did you make this recipe? Please share your pictures with the world on your social media…tag @outlandercast (on Instagram and Twitter) and use the hashtag #howtheymadeitoutlander. I can’t wait to see your creations!