All in the Name of Outlander: An Outlander Fan on her Highlanders 3 Experience

Whether it’s attending a con or meeting up with strangers who’ve become friends through Outlander, the book and show has changed many fans’ lives. Erika Schmale shares her experience at the Highlanders 3 con.

Like many an Outlander fan, I’ve done things I never in my wildest dreams imagined I would do. I’ve been to Scotland (four times now!), traipsing around the countryside to find Outlander locations. And I’ve been to not one but two fan cons.

What Outlander means to me has shifted over the last year or so. Initially it was, “OMG Claire and Jamie couples goals, I need to find that in my life ASAP or I will be incomplete and forever alone and DIE!” (I know, slightly over dramatic maybe?) I also may or may not have developed a very intense role model infatuation/crush on Caitriona Balfe. Let’s face it, the woman is a talented, beautiful, genuine, goofy, badass chick who uses her celebrity status and social media platforms to spread the word and give a voice to extremely important and meaningful movements and causes. Don’t pretend you wouldn’t love to sit down with her over a cup of tea (Irish breakfast, of course) or a glass of wine or whisky, and pick her brain. Really, I could go on and on about her, but I already wrote about Miss Balfe.

I shocked my parents last year when I told them — more like yelled from the computer desk in a different part of the house — that I was going to Seattle to see Sam Heughan and Caitriona at Emerald City Comic Con. I didn’t even check my schedule to see what I had coming up for my grad school classes on the Friday I would be gone. I knew I had to take this opportunity; once again, all in the name of Outlander!

After ECCC, I reflected on a few things. I really do hate crowds and long lines, and I really do get anxious and shy and develop sweaty palms in situations where I have to at all function like a semi-normal human being around anyone at all important, influential or famous. Actually, these things happen in just about any situation at all really when crowds and lines and having to socialize for hours on end are involved. With all of this considered, imagine the surprise (and horror) of my family and friends when I told them that, once again, I would be subjecting myself to another con experience to get 30 more seconds of Caitriona Balfe’s time and attention. This time, however, I would be flying to England. Cue Scotland Outlander trip part 2!

I went into Highlanders 3 thinking it would be my chance to meet Caitriona again, and this time I would get the nerve to ask the woman for a hug (I did get a very sweet “side hug” from Cait at ECCC, but humans are greedy creatures, so of course, I wanted another “real” hug ASAP.) I thought I’d get my hug, meet a few of my online Outlander buddies from other countries, get some autographs from the other actors, who, I was excited to see but had no real expectations about, and then I would call it a day, closing the door on cons for good: boy, was I wrong.

When Caitriona cancelled I was D-E-V-A-S-T-A-T-E-D. I fell apart, succumbing to ugly crying and hysterical sobs. I lost my (figurative) shit and even hyperventilated. I went so far as calling my dad to cry on the phone to him. A grown woman in my late twenties and I needed my daddy to tell me it was going to be okay. At the time, I really did not think it would be. 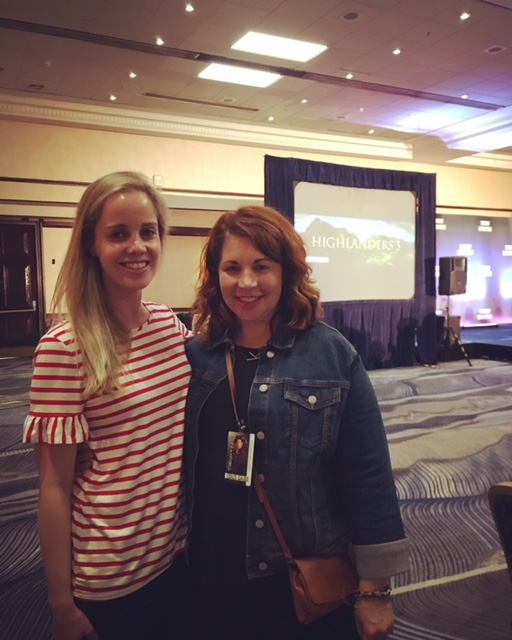 Highlanders 3 was a very different experience than ECCC. Without going into too much detail comparing the two, with ECCC I wanted out almost as soon as I got in. My brief encounters with Sam and Cait (as well as making new friends and spending quality time with an old one) were the only redeeming aspects. With Highlanders, I started with the same anxiety taking over, had an initial “get me out of here!” moment, but eventually I never wanted it to end, and Cait and Sam weren’t even there.

Sophie Skelton is beyond sweet and gracious and wise beyond her years and we don’t deserve her. Stephen Cree is foul mouthed and crude and totally not PC at all, but he might just be the wittiest, funniest person I’ve encountered. I was lucky enough to witness a sweet moment where a rather concerned Mr. Cree wouldn’t continue with his autograph signing because a fan was very visibly upset, having lost or misplaced something of sentimental value somewhere in the room. It wasn’t until his handler assured him that she would assist the woman that he continued on with his signings.

Richard Rankin is right up there with Stephen, (though maybe not quite as crude?) and loves to make his fans laugh and smile, even leaving the stage to enter the audience and get up close and personal with you (I may or may not have taken a selfie with his behind when he stood with his back to me; I know, I’m not proud). He also has a way of making you feel special, as in remembering details from your life that you shared with him previously. At the meet-and-greet, I mentioned San Francisco, and he shared memories of living there for three months. The next day at autographs, I approached his table and was greeted with a very friendly, “Hey, how’s it going San Francisco!” That sure is one way to make a gal feel special! The man can also rock the crap out of a sweater, let’s be honest.

Lauren Lyle is my spirit animal. She’s the younger version of the self I wish I was when I was her age. She’s hilarious and fearless and bold and a force to be reckoned with; she can hold her own with the boys and needs no help putting them in their place. She is going to do great things with her career.

Annette Badland holds her own amongst the “young’ns.” You can tell how much they respect and admire her, especially Lauren and Nell Hudson. When I got her autograph, I told her that as soon as Mrs. Fitz came on screen I thought to myself “I wish I had an auntie like Mrs. Fitz!” She immediately smiled from ear to ear and replied with; “I’ll be your auntie!” She is just as sweet and talented as can be.

The other actors were equally wonderful, just as kind and gracious and lovely and witty (and oozing talent!) as can be; I wish I’d gotten more time and opportunities for interactions with them as well. No, Cait and Sam were not there, but you know what? It was all okay. In fact, it was better than okay. The con was awesome and special and it was those who were present who made it so. I hope to get more intimate, special moments again with these awesome people in the future. I also became even closer to one very special Outlander friend of mine, and met and got to know another; they live in a different country and state, respectively, and one is a young student who lives with her family and the other a professional, independent adult. So it all comes full circle: strangers becoming “Outlander” friends online and at cons, regardless of place of birth or age or occupation, traveling together in Scotland and meeting for the first time or meeting up again at a con to experience it all in the name of Outlander.

I thought for sure my con days were over, but the joke’s on me! It took ONE day of tickets for Highlanders 4 being available, a day where I deliberated my choice and went back and forth between the hours of 4 and 6 AM, before I  decided I am actually not done with the Outlander fandom or cons. In fact, I’m only getting started. (Cue Scotland Outlander trip part 3!?) My friends and family call me crazy, but, you all know — it’s all in the name of Outlander.

What types of things have you done that you never imagined doing before, thanks to Outlander? Is Outlander your first fandom?