When Outlander Season 2 ended, I was worried. Yes the season was good, but it was not as great as Season 1. Not only did we have to live through #SexDroughtlander but the writers opted to pit Jamie and Claire against each other, a change from the book that I thought was misdirected. (And I say this in full agreement that it’s okay for the book and TV show to differ. I just thought that was a poor choice.)

And so, unlike Season 1, where the remote control practically auto-corrected to Outlander by itself, I didn’t rewatch Season 2 at all except for the “Faith” episode. Instead I spent that Droughtlander worrying that Matt B. Roberts et al had lost their Outlander compass and that Season 1 was going to turn out to have been the series’ acme.

Season 3, though, brought us back on track (praise the Lord) and I realized that maybe I should give Season 2 another shot. Since I was no longer worried that Outlander was a one-season wonder, I discovered Outlander Season 2 actually has a lot going for it. Here, in no particular order are my 15 reasons to rewatch Outlander Season 2.

1.) The cold open with Claire. The first time around I wondered what the hell they were doing. Why oh why are they showing us the end at the beginning????? Rewatching means I can just enjoy Caitriona Balfe’s wonderful acting. Her face! Her crying in the road! 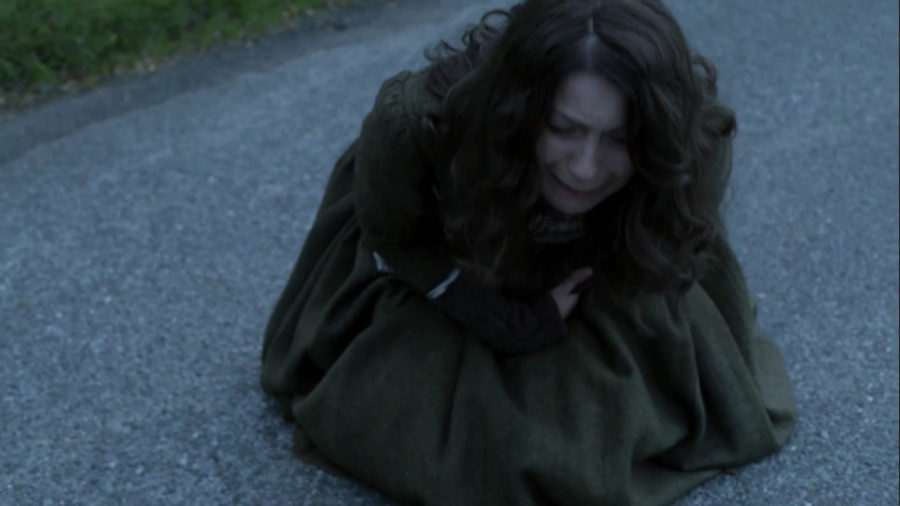 2.) Bear McCreary’s music: I loved how he tweaked the opening sequence with the Baroque and French music. And I had the French music on repeat on my phone for hours at a time. On some days, it’s the only thing that got me through a very toxic work environment. Put on ear buds and ignore the insanity was my go-to strategy. Anyway, the Compte’s theme! Versailles! The apothecary! I love it all.

3.) Tobias Menzies’ acting. Was there ever a moment of more acting wonder than those seconds when Claire tells him she’s pregnant and we watch his facial expressions move through misplaced initial joy to desperate recognition and frustrated anger? Tobias has been a standout since the series began and Ron D. Moore made the risky (at least potentially) choice to put one actor playing two different roles. He has nailed Black Jack Randall and Frank, cleverly showing the ways in which their genetics connects them and yet making them very different and believable men. This was the season when he could have been a serious Emmy contender. Sadly it was also the season Outlander didn’t put in nominations due to the timing of when the show was running. 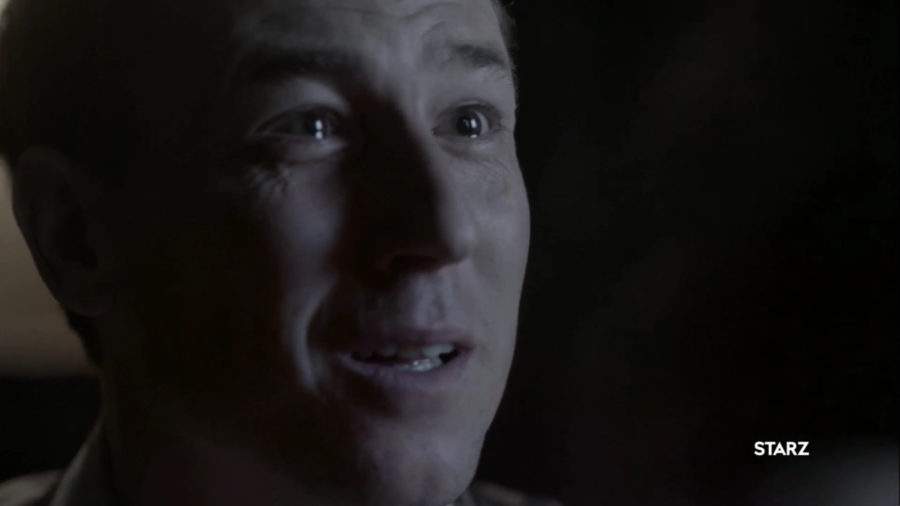 4.) Murtagh: So many wonderful moments. “France. Reeks of frogs.” Fencing in the park with Jamie: “Have you never seen two men practicing the art of the sword?” “This misery of a country. I’m out of breath already. It’s the air — arses and armpits.” Reacting to learning who Claire really is. Volunteering to marry Mary. Book purists can quibble about other changes but they really should take a deep breath and simply enjoy the ways in which the TV producers have expanded Murtagh’s role. It’s wonderful to see his relationship with Jamie and really understand it in ways I don’t think the book shows as well. I, for one, can’t wait to see how he’s developed in Outlander Season 4 and beyond since we all know he’s alive. 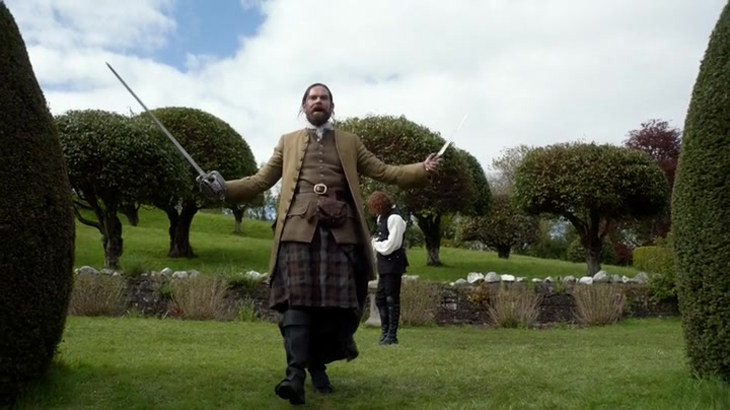 5.) The clothes. I have loved  Terry Dresbach’s costume vision for Outlander from the beginning, but this was her season to shine. Thanks to the opulence of Paris in the 18th century, we could see the breadth of her costume brain. Each outfit Claire wore was more beautiful than the last. The red dress. The nipple dress. The purple cloak. The list goes on and on. We will miss you Terry. 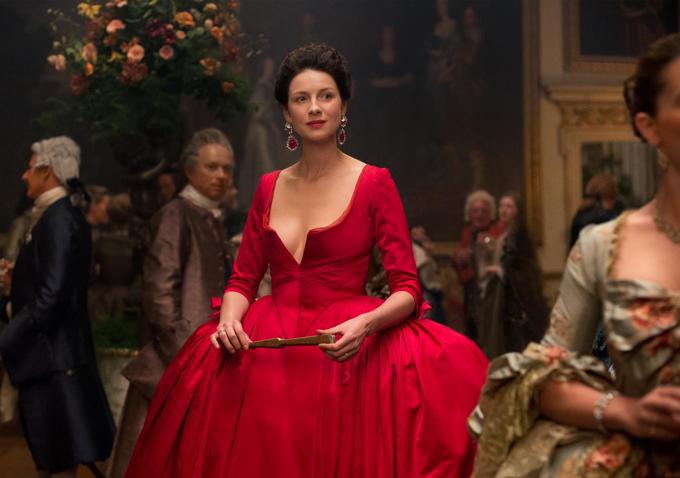 6.) Le Comte St. Germain: Stanley Weber was the perfect comte IMO. His complete disdain for anything and anyone not French was visible in each and every one of his perfectly coiffed moves. He makes the perfect foil. His death scene was perfect. 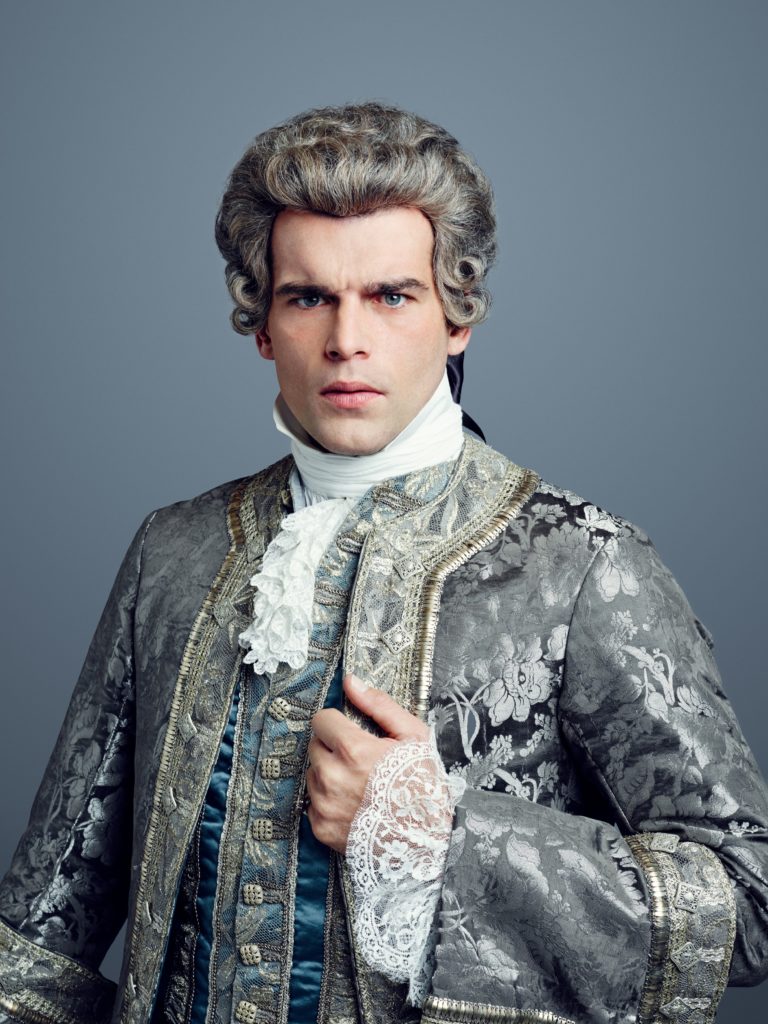 7.) The sets. One of the things that makes Outlander so damn good is its attention to detail, and the sets help create the standard. Simply put,  Jon Gary Steele is a wizard. No wonder he created Master Raymond’s apothecary so perfectly…and the Star chamber…and Versailles. You get the idea. On a rewatch, I can revel in every glorious detail because I’m not as irritated by some of the twists and turns. (See note on #SexDroughtlander.) 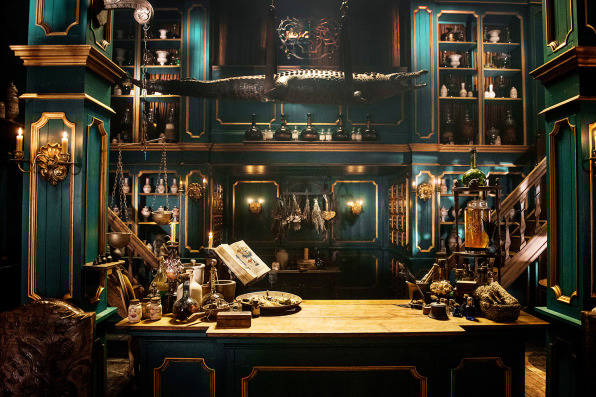 8.) Duke of Sandringham. I have loved Simon Callow since I first saw him in Four Weddings and a Funeral and then Shakespeare in Love. He’s brilliant. Here he adds just the right amount of camp to this character to make the duke delightfully deceptive and delicious. And it’s so clear that he is having a good time doing it. He knows the duke has a short shelf life in the show and just plays it for all it’s worth — not unlike Bill Paterson, who plays Ned Cowan, another fave of mine. 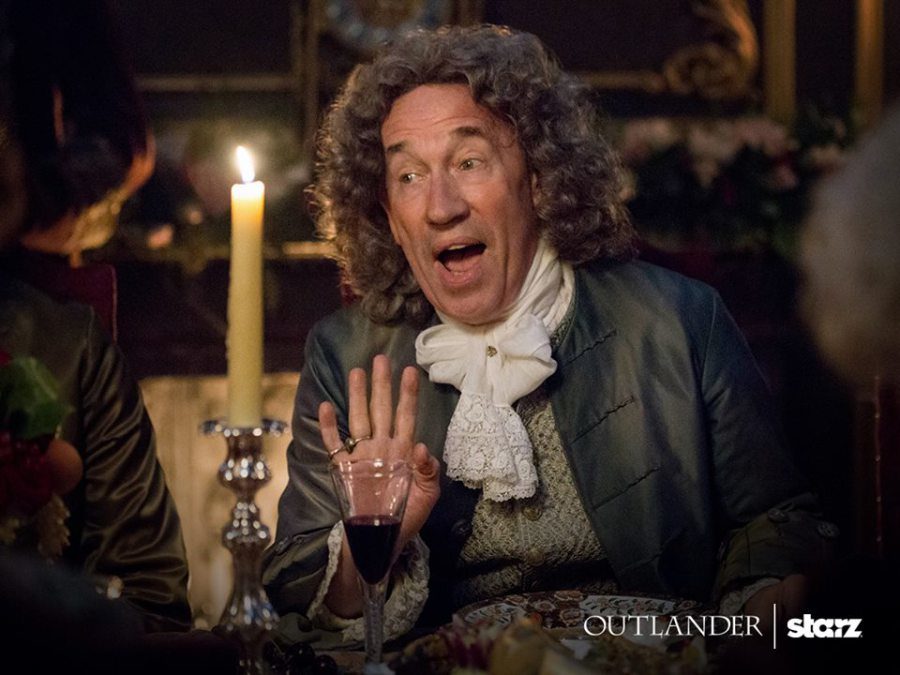 9.) Young Fergus. Young Fergus has to grow up, so one of the perks of rewatching this season is knowing that is going to happen and, therefore, enjoying each and every Fergus moment. He brings out the mother and father in Claire and Jamie and that glimpse of their potential as parents only makes their ultimate parting all the more poignant because we have had a glimpse of what might have been. And then there’s that moment when he tells Murtagh what’s what with women. Priceless. 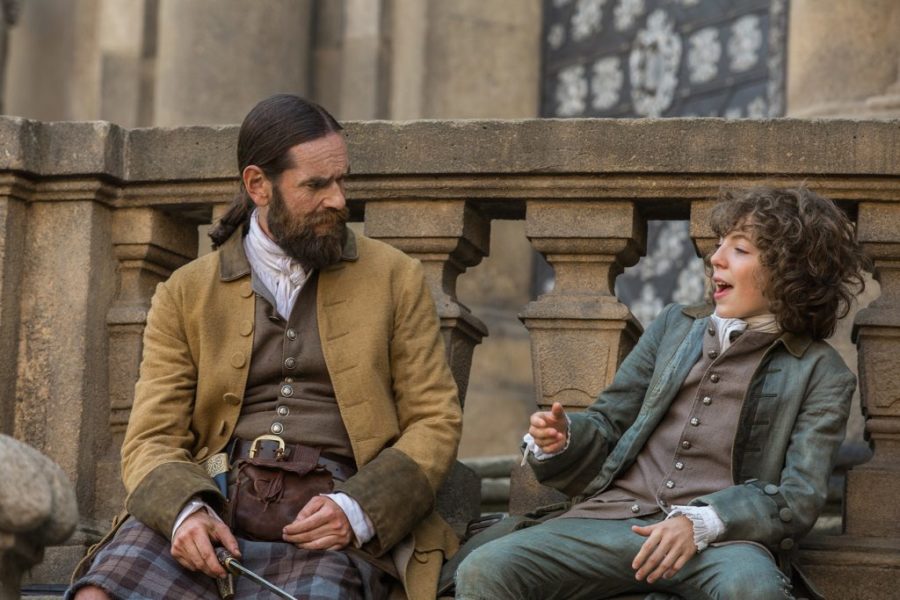 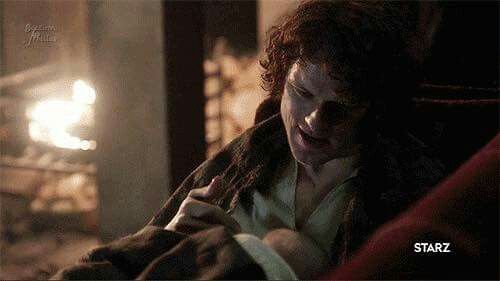 11.) Louise. The waxing, the friendship, the absolutely gut-wrenching scene when she helps Claire literally let go of Faith. This is lady power and friendship to the max and it only makes me appreciate my female friends more each and every time I see it. We women need to stand together. 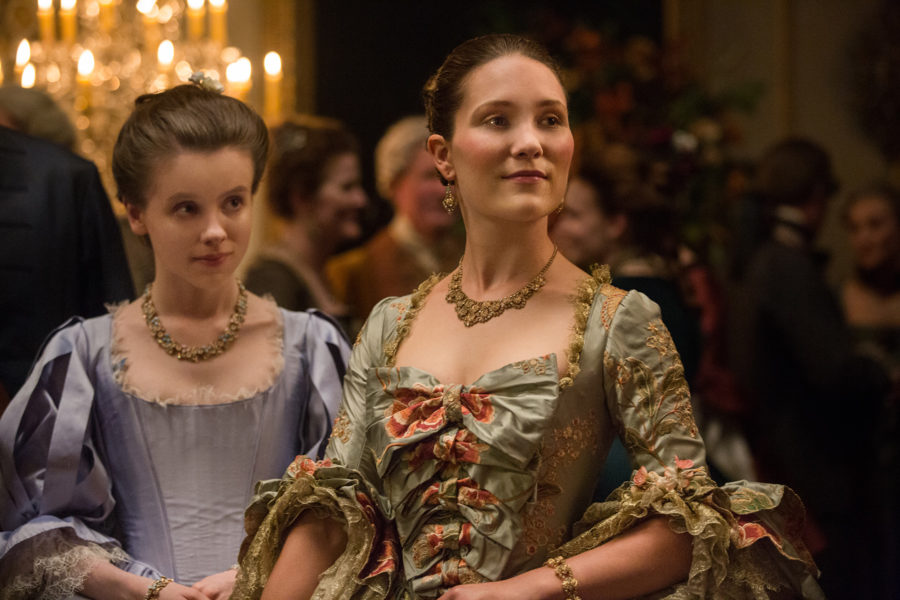 12.) Claire’s PTSD. The first time around this annoyed me. As a book reader, I was like the what hell are you doing giving us WWII flashbacks (and at the time one reason I was saying this was because I saw this as a way for them to make room for some Jamie and Claire romance. In my defense, in case you think I’m a pervert, Dragonfly in Amber is filled with passages of them reconnecting this way. Just sayin’.) Stay on track, producers! In rewatching, though, I have realized that this was actually a smart TV move that gave depth to her character and added credence to the war scenes, generally. It provided a back story we didn’t get in the books and it was a worthy one. Apparently I don’t know as much as TV people about bringing a book series to the screen. Huh! 🙂 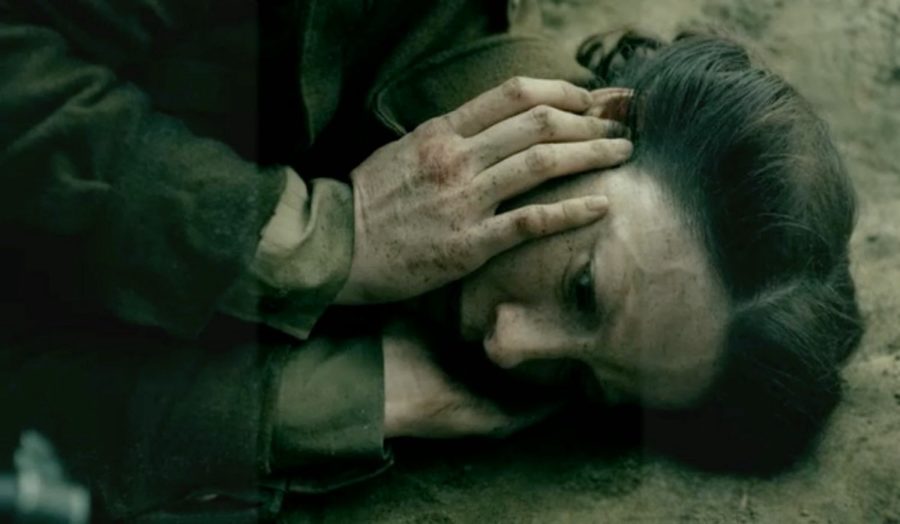 13.) Angus. Such a great character that really is not much of anything in the books. In the first watching of Outlander Season 2, we don’t know this is last. Book readers expect Rupert to die. So when Angus sadly, horrifyingly leaves us, it’s a shock…that we can all fix by rewatching this season with renewed appreciation for Stephen Walters and his craft.

14.) Dougal’s good-bye sequence with his brother Colum. Is there a sibling relationship anywhere that’s not complicated? Not likely and certainly not with Dougal and Colum. But this searing performance by Graham McTavish just gets better each and every time I watch it. You can feel the grief and the realization that Dougal lost his chance to ever make it right with his brother. It reminds me to say what I feel and mean to the people I love when I feel it rather than wait. Life, no matter how long, is still but a breath (to quote another favorite book of mine). 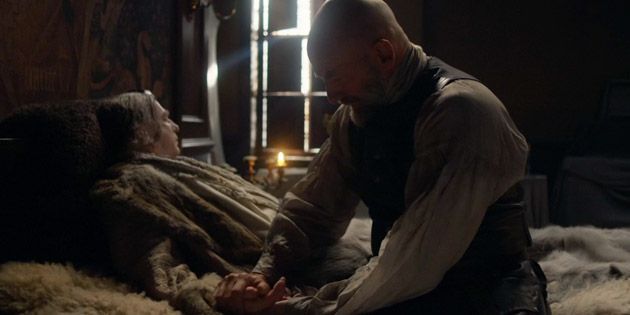 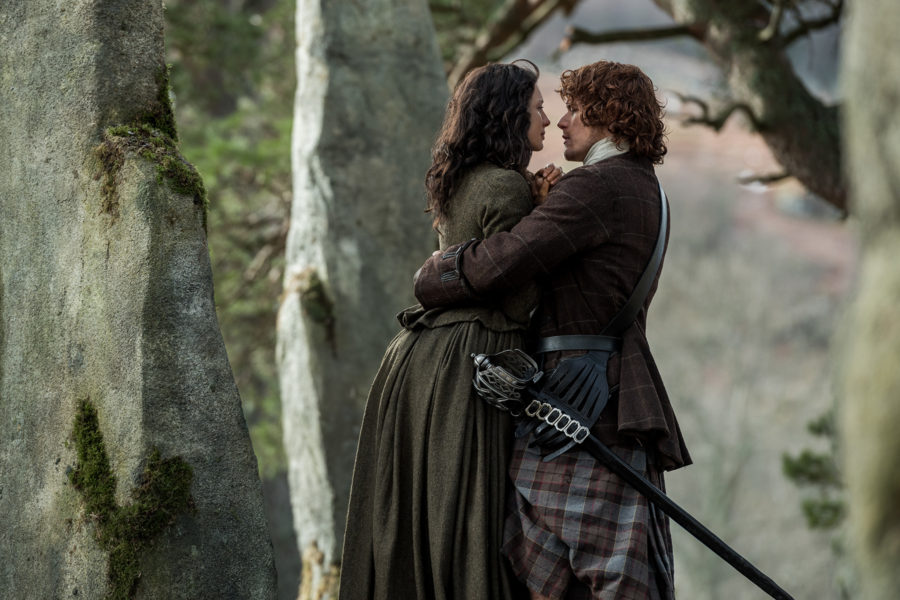 Do you rewatch Outlander Season 2? If so, what are your favorite parts? If not, why not?