How They Made It: Mini Boston Cream Pie with Brianna

Welcome back to our occasional series, “How They Made It,” where we explore the food and drink of Outlander. Here’s a look at Brianna’s mini Boston Cream Pie for Roger. Slainté!

Roger was so cute when he showed up unannounced at Claire’s home in Boston, and he was so grateful for Brianna’s “American” Christmas of lobster rolls and “Boston Crrrrrrream Pie” (oh, that brogue…I could listen to him forever). I’ve read some criticism of Roger and Brianna’s chemistry on the show (especially this last season), but I love them together, so awkward and bumbling. I think they’re not meant to be so easily a couple as Claire and Jamie but, like lobster at Christmas, they have a different kind of relationship. And like cake, cream and chocolate, they do go together, and go together sweetly…like Boston Cream Pie (see what I did there?). And since Brianna is like Jamie junior, I think a mini Boston Cream Pie is in order. 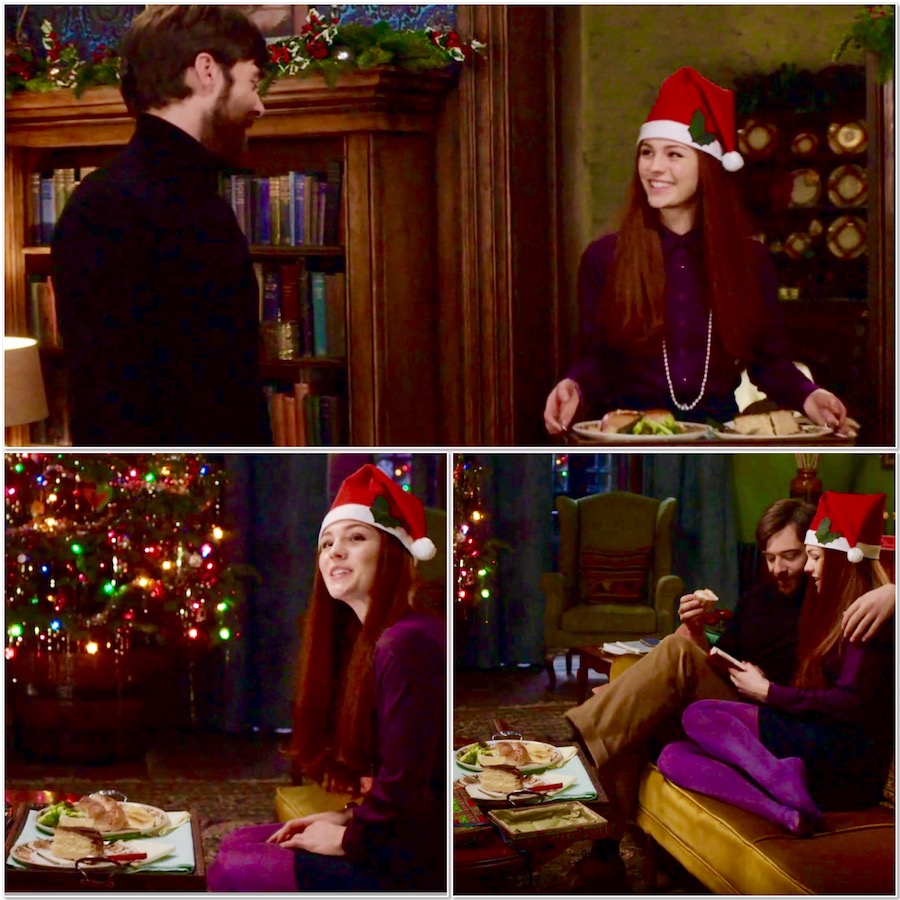 Lobster Rolls and Boston Cream Pie for Christmas? I guess it makes sense for Roger, and Brianna is happy to make it happen. (photo credit: Outlander STARZ)

Ok, let’s get the name question out of the way…according to “All Things Knowledge” (aka Wikipedia), this dessert “acquired its name when cakes and pies were cooked in the same pans, and the words were used interchangeably” … and … “[as] a direct descendant of earlier cakes known as American pudding-cake pie and Washington pie, the dessert was referred to as chocolate cream pie, Parker House chocolate cream pie, and finally Boston cream pie” having been invented at the Parker House Hotel in Boston in the late 19th century. Thanks, internet!

There are, as you’ve already guessed, three parts to making Boston Cream Pie –  baking the cakes, making the pastry cream (aka crème pâtissière if you want to get fancy) and making the chocolate ganache. The first and last parts are straightforward: the cake is a classic hot-milk-and-butter cake, so called because you use…uhm…hot milk and melted butter in the batter. This cake type is a richly flavored sponge – moist, and tall. Chocolate ganache is…well…fudgy chocolate nirvana. ‘Nuff said. It can be used to glaze cakes (as it is here) or as the filling for tarts and truffles. Remember the two-bite Chocolate Ganache Tart made with short crust pastry? Yup, that’s just chocolate ganache filling the pastry shells. Easy peasy. 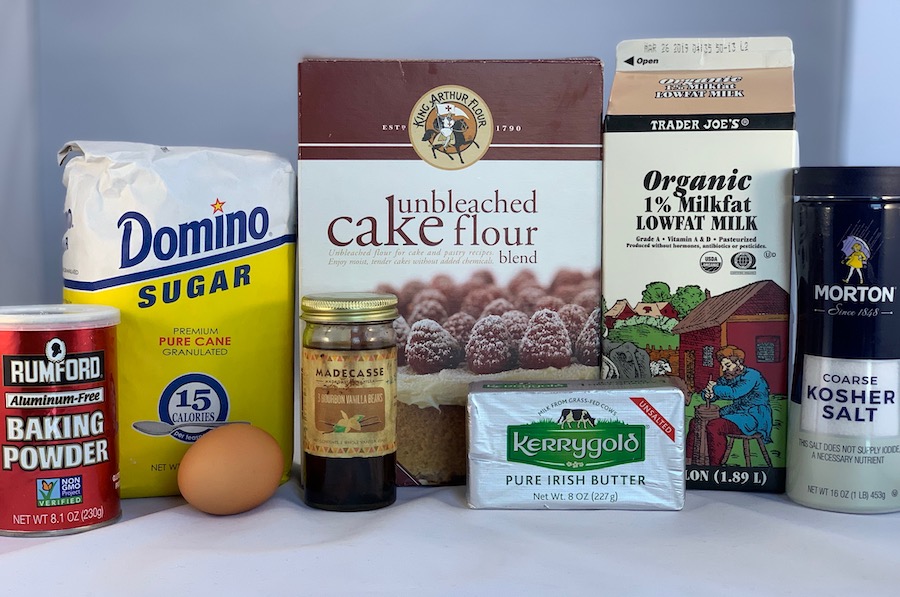 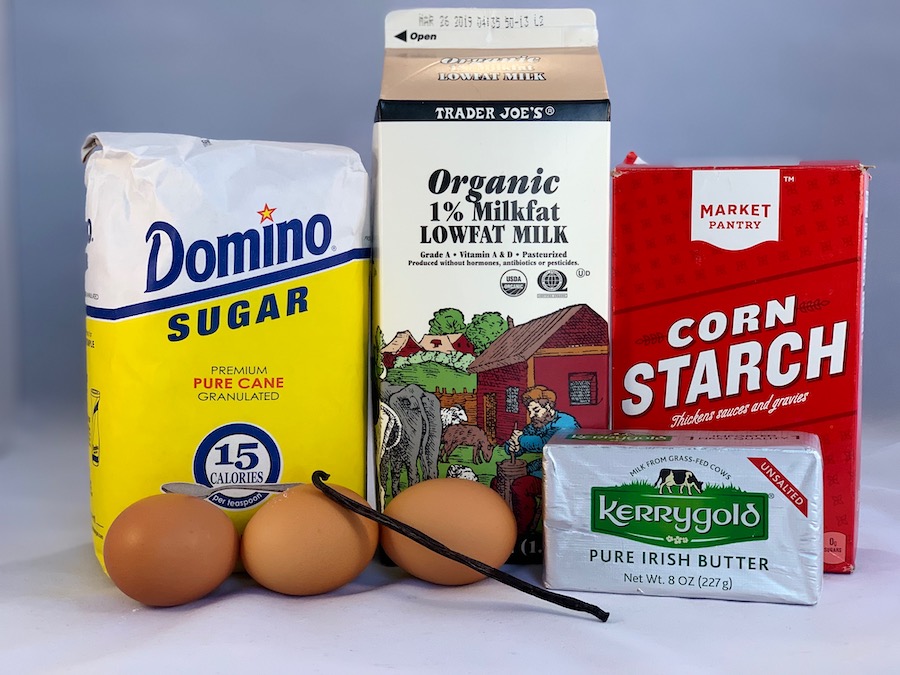 …the few choice ingredients that go into the pastry cream… 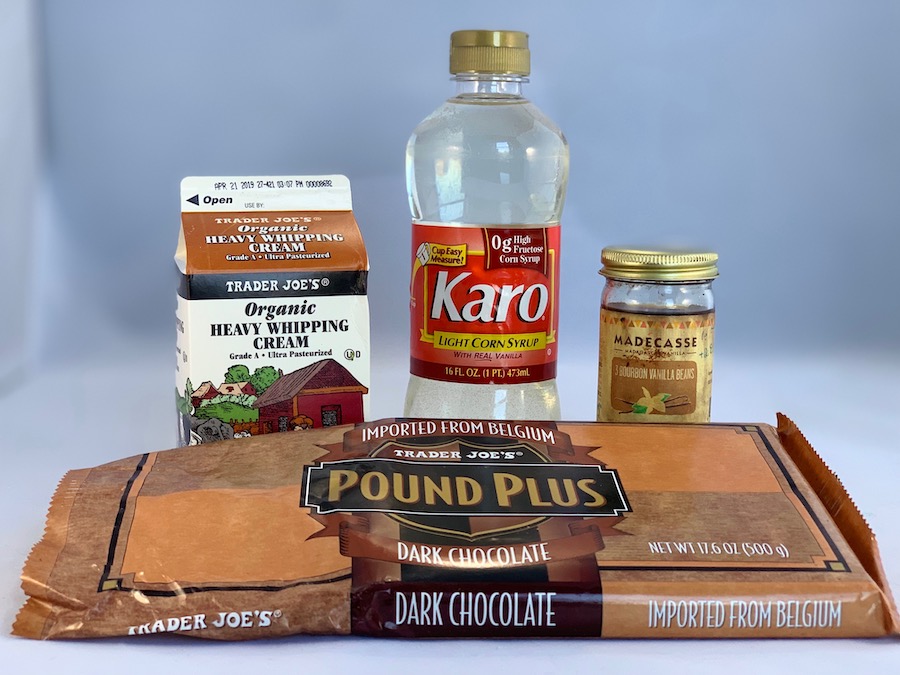 …and the rich ingredients that go into chocolate ganache

Making pastry cream can be a little tricky the first time out. It’s really not a difficult technique, just a slightly thicker version of vanilla custard pudding. The most challenging step to the pastry cream might be when you have to temper the eggs, i.e., bringing them slowly up to temperature before adding them to the hot milk. This step helps avoid little pieces of cooked egg in your pastry cream. If, however, you do see some egg pieces, straining the finished cream through a sieve will take care of them. (Side note: if you want to make vanilla pudding, use the same technique as the pastry cream, just reduce the cornstarch to 2 Tablespoons…it’s guaranteed to be much better pudding than anything you can get out of a box!). 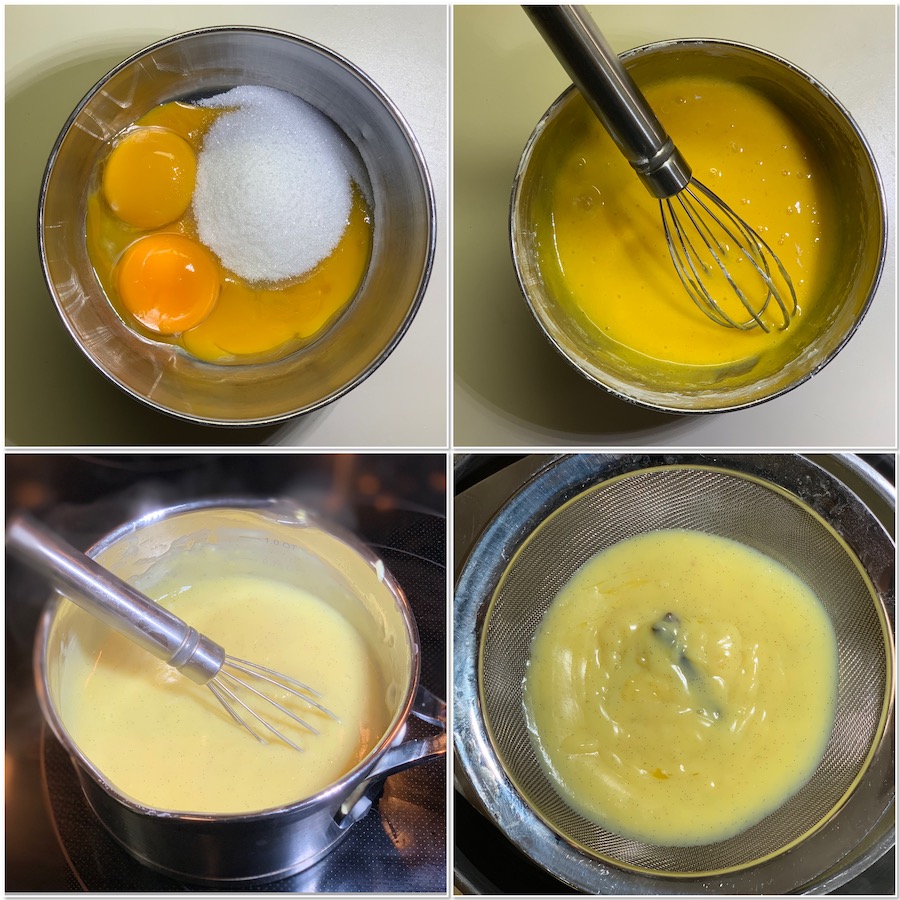 Stir together egg yolks, sugar, and cornstarch until smooth (top row) while the milk mixture heats up on the stove. Temper the hot milk into the eggs, then add back to the saucepan and whisk until it’s thickened (bottom left). Strain into a clean bowl to remove any wayward pieces of egg (bottom right).

By the way, the pastry cream is flavored with fresh vanilla beans seeds (if you have them). Did I say vanilla bean seeds? No, flecks of flavor, more like! I don’t always use fresh vanilla, but I do when it will be showcased, like in pastry cream or Magic Custard Cake. To use a fresh vanilla bean, split it lengthwise and scrape up the seeds with the back of a paring knife, then stir those flavor flecks into the milk mixture (along with the spent bean…nothing goes to waste here!). Also, don’t toss that spent vanilla bean after you’ve finished making the pastry cream…instead rinse the bean, then place it in a jar and cover with vodka to make your own vanilla extract. You’ll be rewarded with vanilla extract that’s both free and better than what you can buy. Score! 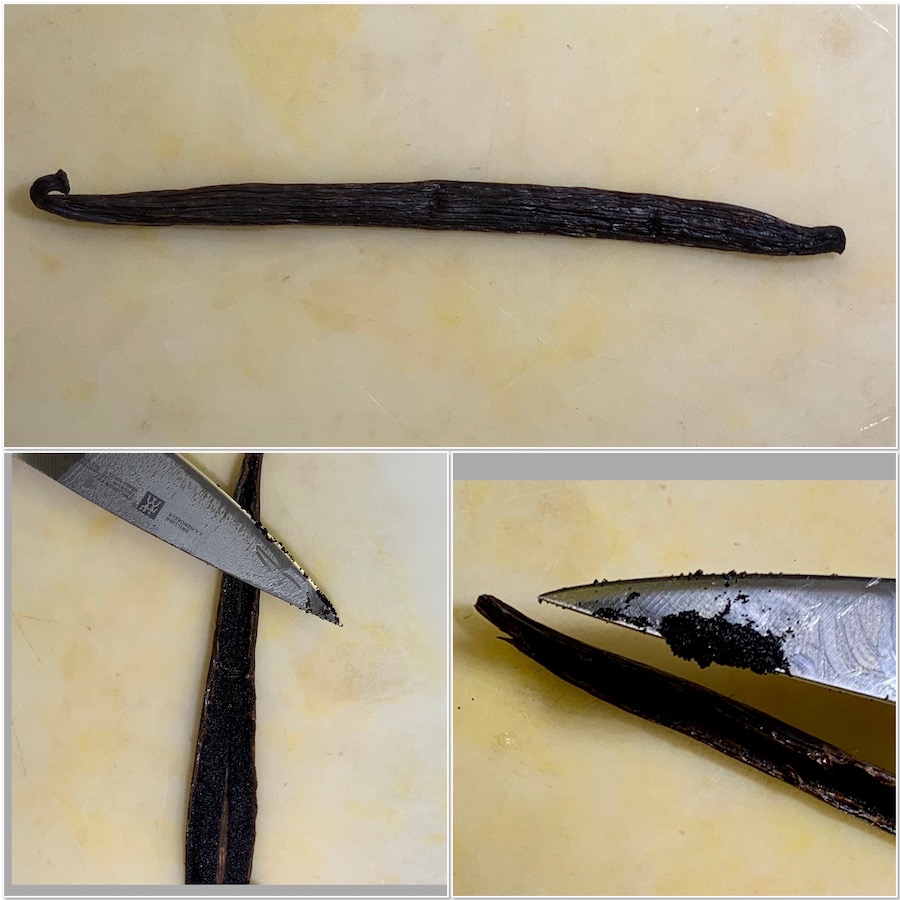 From this nondescript bean comes enormous flavor! To use, split the bean lengthwise and scrape up the seeds with the back of a paring knife 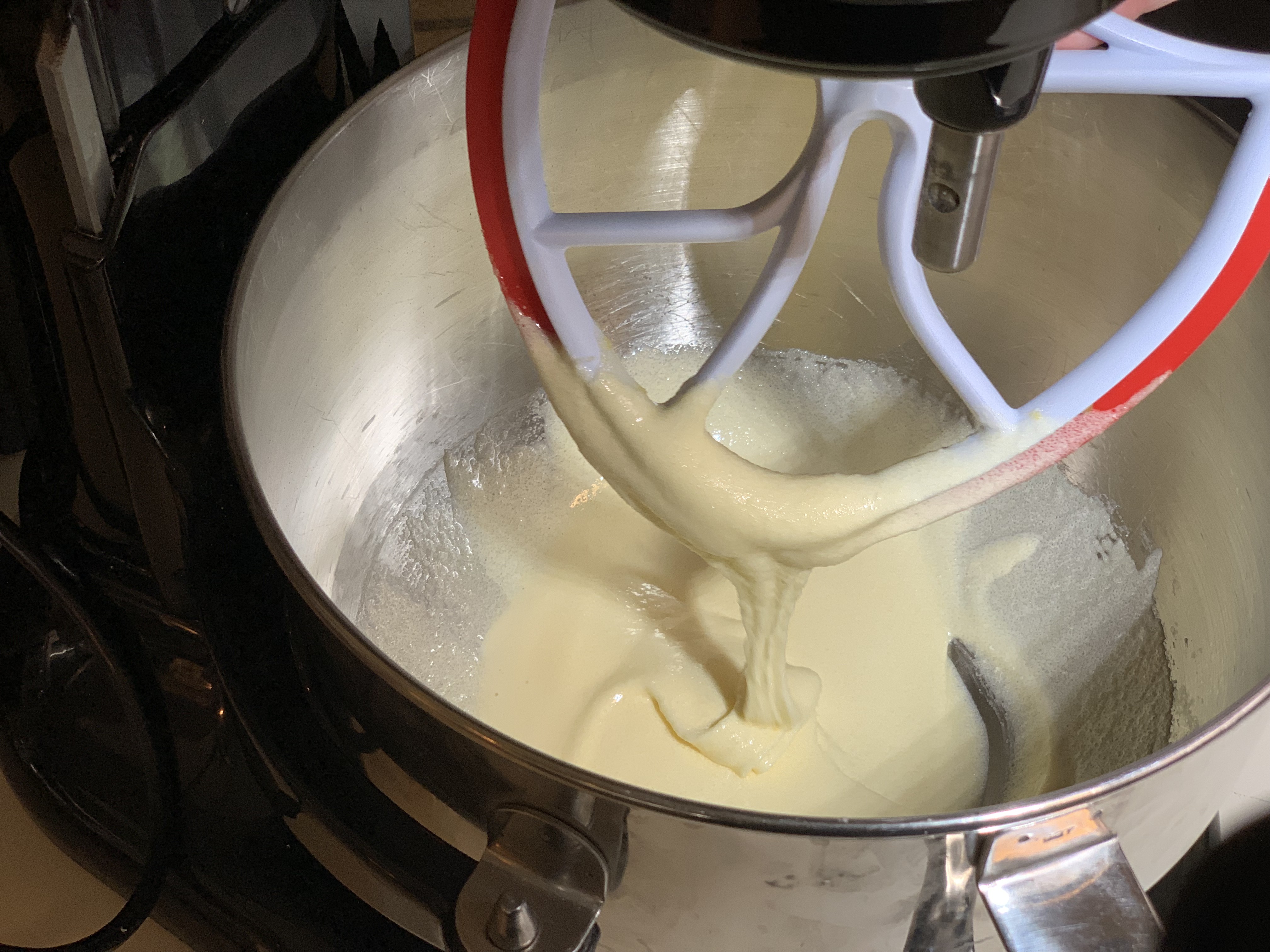 You want the cake batter’s initial sugar/egg mixture to fall as thick ribbons before continuing with the recipe. 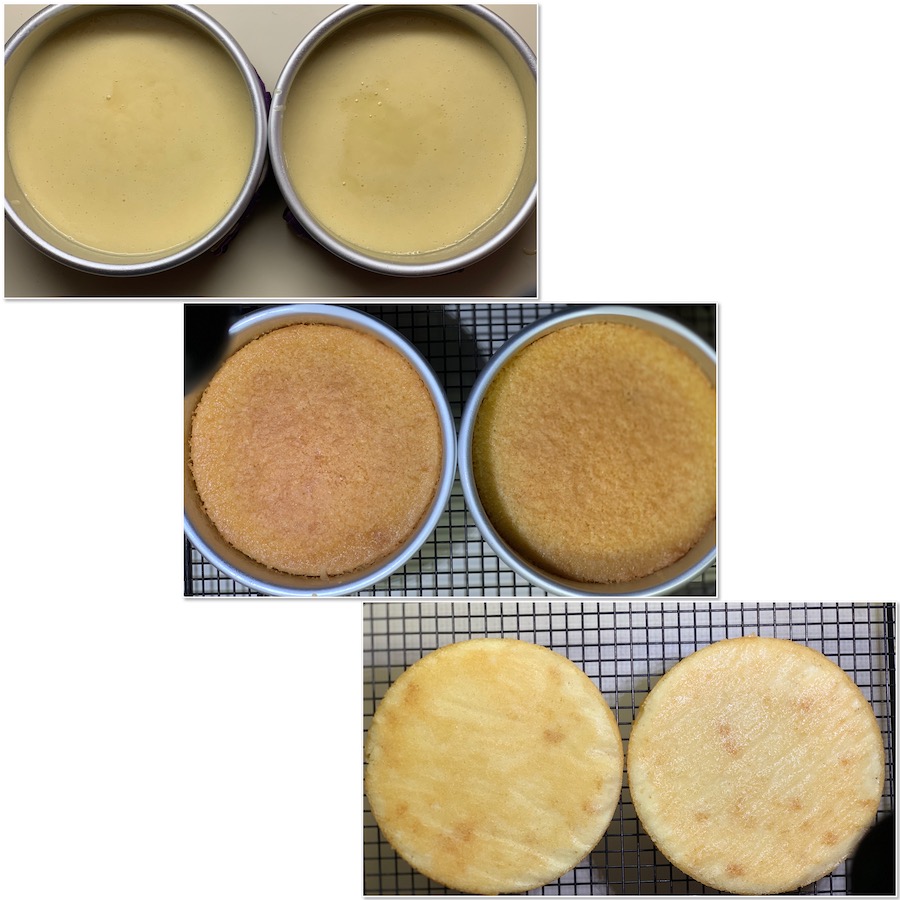 The cake batter will be thin (top), and be careful not to over bake the layers (middle). Using parchment paper helps the layers to release easily (bottom). 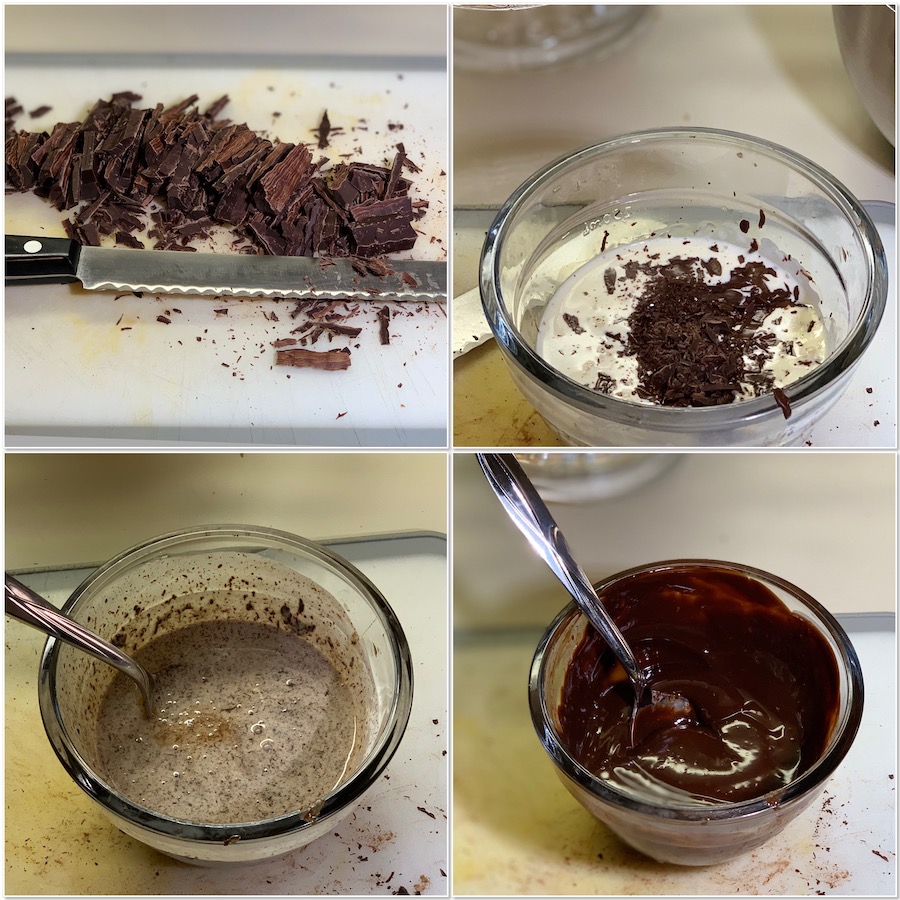 Making ganache is the easiest step of all…add chopped chocolate to hot cream, let sit a couple of minutes, then stir, stir, stir. Your efforts will be highly rewarded! 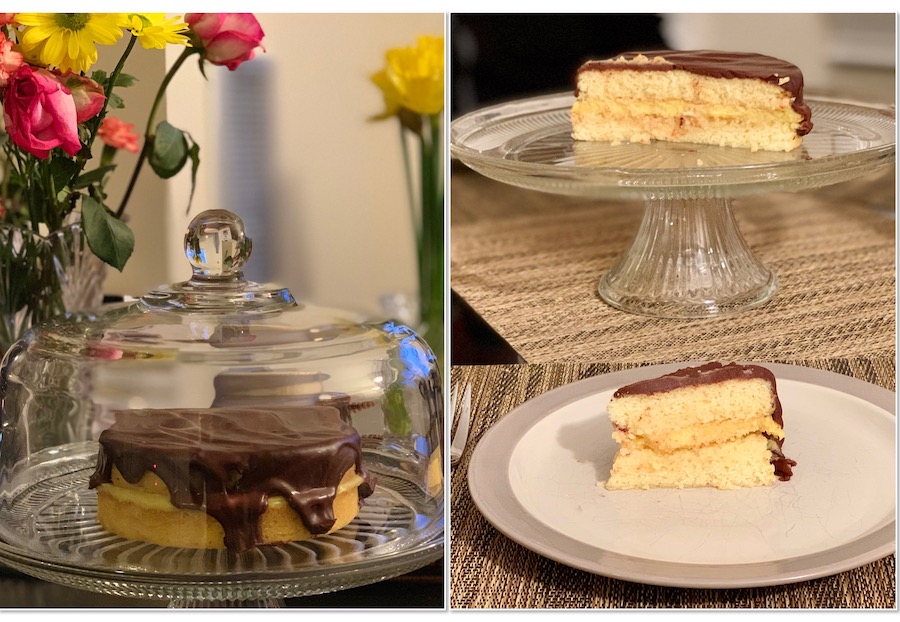 I made a mini Boston Cream Pie for my new son-in-law’s birthday, just to make it extra special

Brianna wanted to make Roger’s first American Christmas extra special, even as she mourned Claire’s departure. Her consideration on that small point helped start their relationship. Mini Boston Cream Pie is an indulgence, to be sure…yes, it has a few extra steps than regular cake, but when you’re trying to make an event extra special, it’s well worth the effort. And the results…well…I call it chemistry. 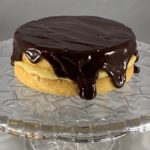 For the pastry cream

Tempering the eggs, i.e. bringing them slowly up to temperature by slowly adding the hot milk mixture helps to avoid little pieces of cooked egg in your pastry cream. If however you do see some egg pieces, straining the cream through a fine mesh strainer will take care of them. Don’t toss that spent vanilla bean…instead rinse the bean, then place in a jar and cover with vodka to make your own vanilla extract. Chop the chocolate with a serrated knife...it cuts it cleaner than a chef's knife. You can make the cakes a day ahead and chill wrapped in plastic wrap. Bring to room temperature before serving. Store any leftovers in the fridge, wrapped in plastic. For a full-sized cake, double all the ingredients. Bake the cake in two 9-inch round cake pans for 30-35 minutes. Did you make this recipe? Please share your pictures with the world on your social media…tag @outlandercast (on Instagram and Twitter) and use the hashtag #howtheymadeitoutlander. I can’t wait to see your creations! 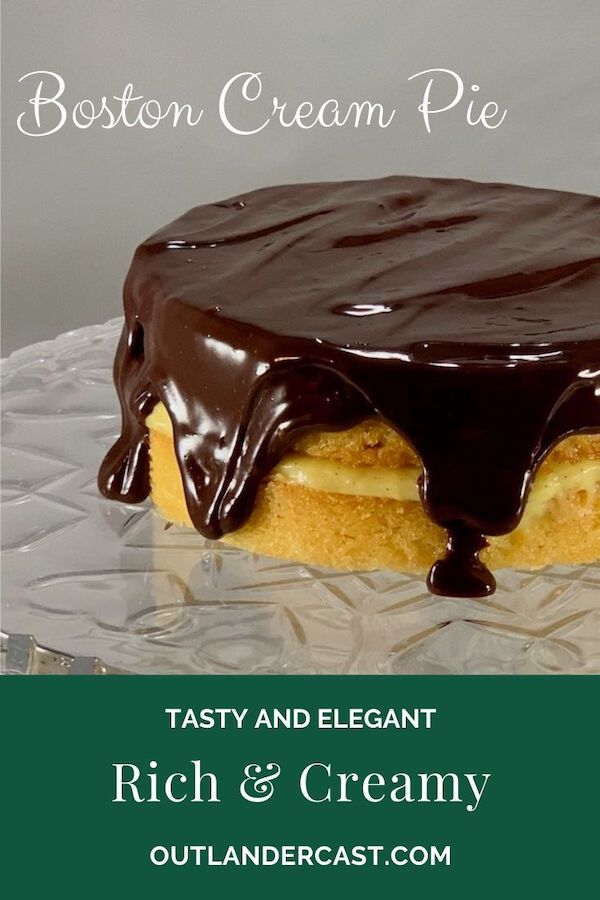 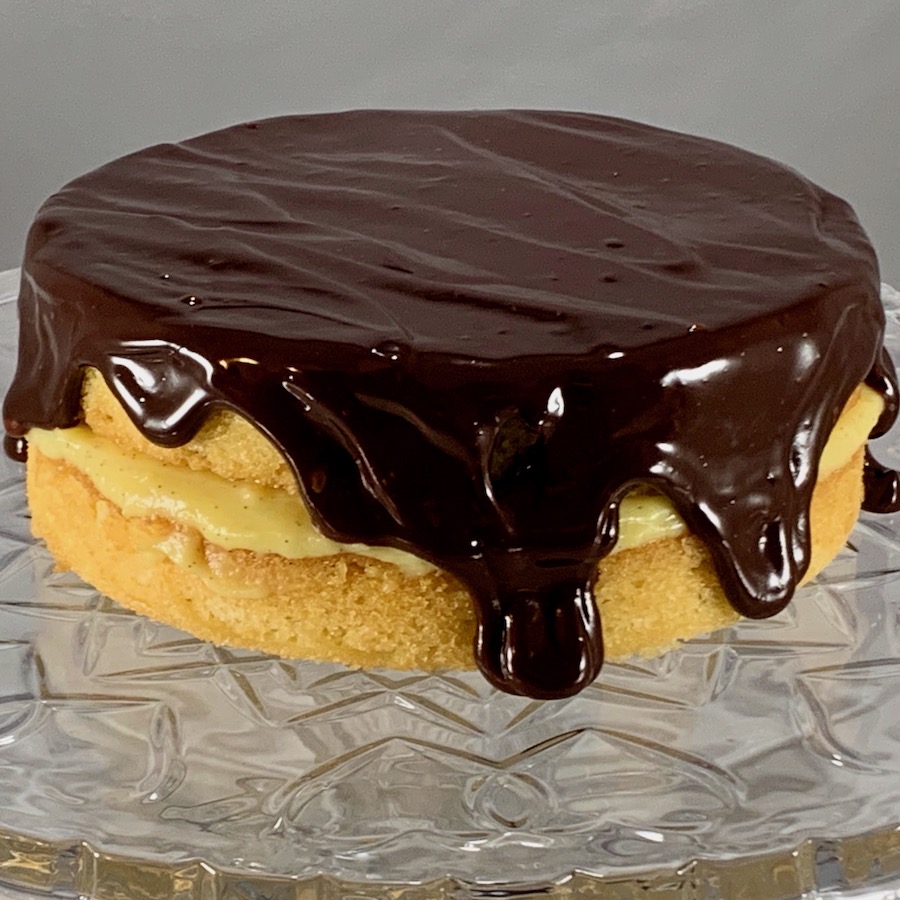 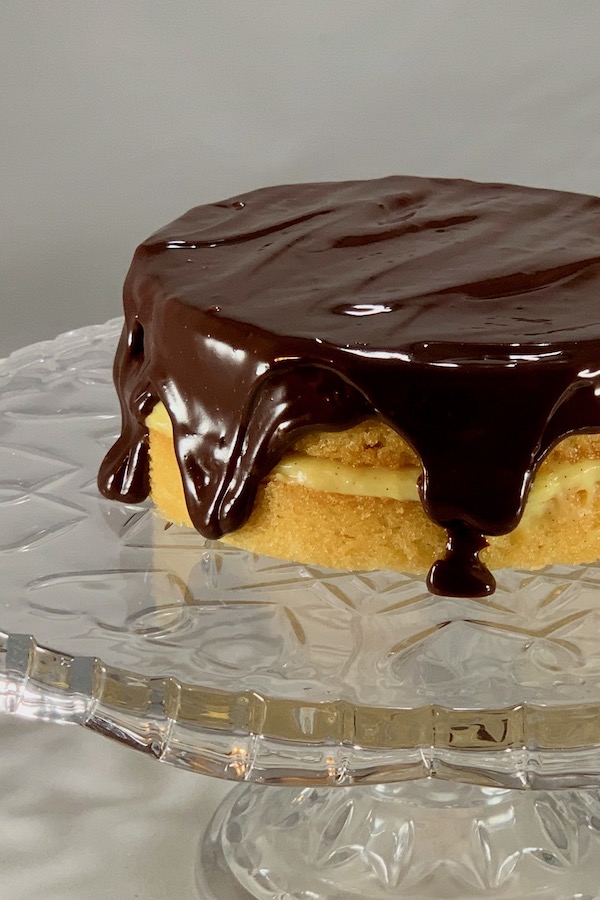