How They Made It: Bread Pudding for Fraser’s Ridge Family Dinner

Welcome back to our occasional series, “How They Made It,” where we explore the food and drink of Outlander. It’s time for family dinner at Fraser’s Ridge, featuring chocolate chip bread pudding. Slainté!

I want another family dinner (and dessert) at Fraser’s Ridge

Well, Outlander Season 4 is coming to a close, and our heroes are scattered all about the colonies. As I write this, Jamie, Claire and Young Ian (wee Ian?) are hot on the trail to retrieve Roger somewhere in New York, Brianna and Lord John are at River Run after visiting Stephen Bonnet, and Fergus and Marsali are heading to Fraser’s Ridge with Murtagh.

Ahh…I long for those early days at Fraser’s Ridge when the Frasers gathered around the table for those wonderful family dinners. Doesn’t it seem just yesterday that we were baking Sourdough Spice Cake along with Claire? My how the season has flown by. So in one last attempt to delay the dreaded Droughtlander, let’s look at another dish Claire might have served at those family gatherings…bread pudding. But not just any bread pudding (after all, Jamie’s still is up and running, and maybe some of that spirit has been aged just a bit) – let’s make Chocolate Chip Bread Pudding with Maple Butterscotch Whisky Sauce. 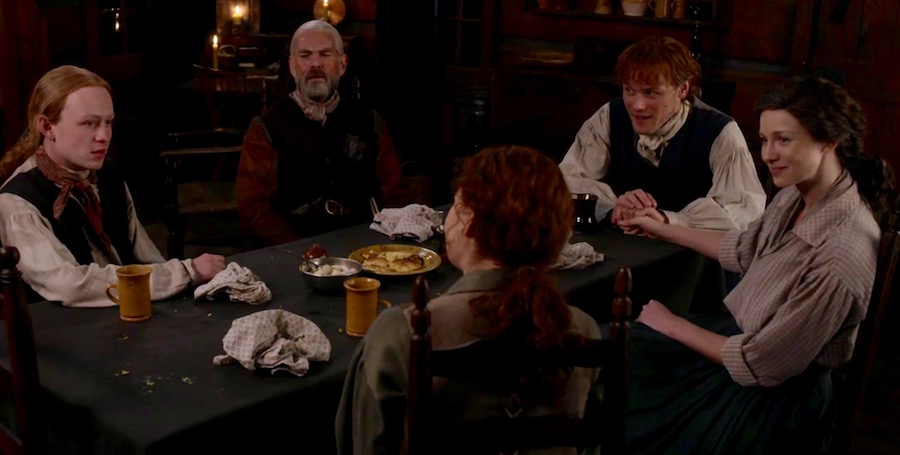 There are any number of recipes for bread pudding available online, but the concept is simple; basically, it is stale bread soaked in an egg and cream custard, then baked until the custard sets. I adapted my recipe below from the one found in the Outlander Kitchen Cookbook by Theresa Carle-Sanders, but I also looked at many other sources as well. 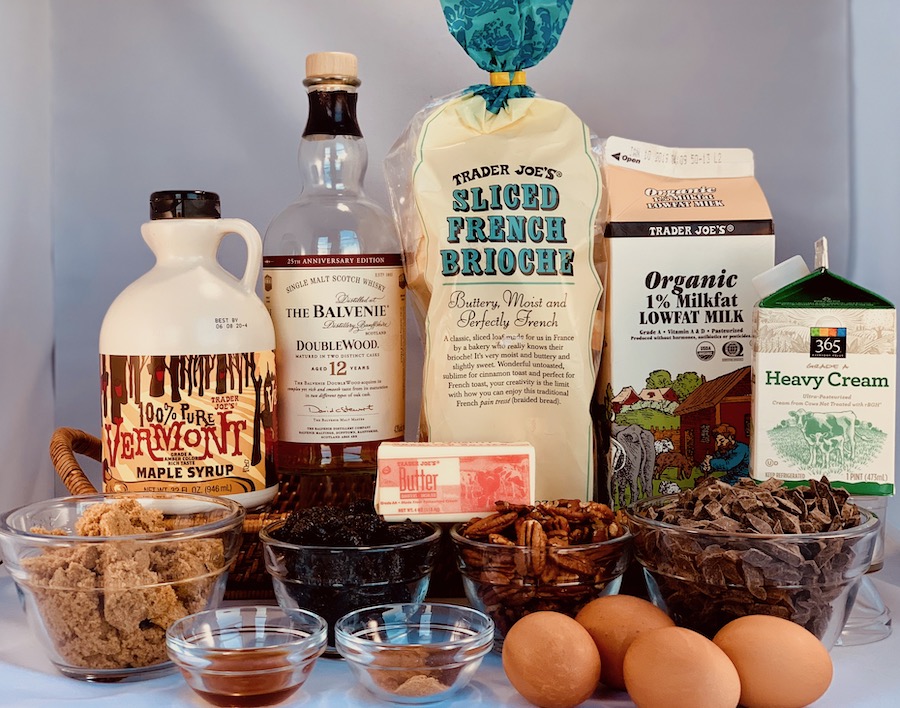 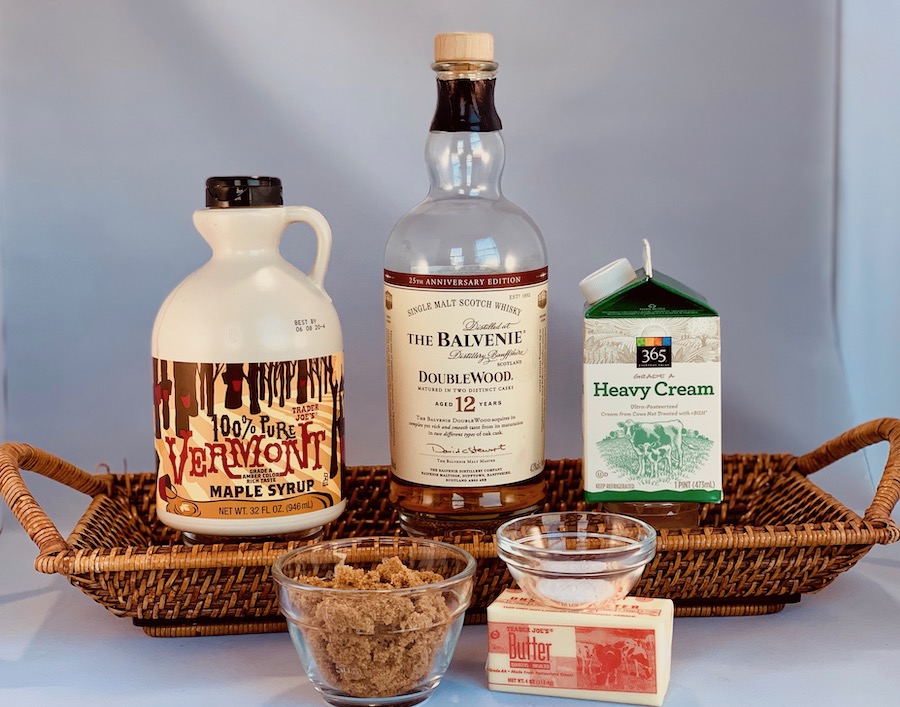 The technique isn’t difficult…cube up some bread, add in the mix-ins, and make a custard with milk, eggs, and sugar. Speaking of the custard, it’s is in the same family as the pastry cream from Boston Cream Pie, Egg Custard, or even Egg Nog (I like the spectrum concept…don’t you?). As for the choice of mix-ins, maybe the Frasers would have used different ingredients (and probably not chocolate), but they’d have used some aspects of dried fruits, nuts and flavorings such as molasses and maple. After all, bread pudding is so easily customizable, so I took a little liberty with the mix-ins I used. Creativity in the kitchen is a plus, people! 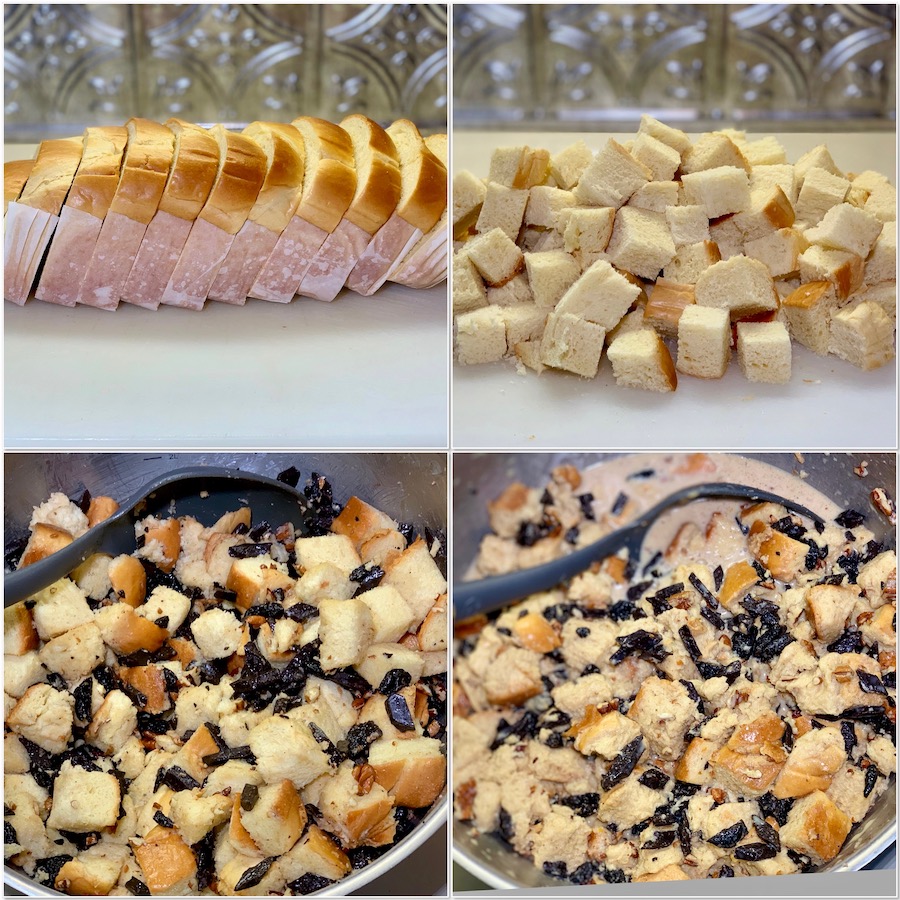 Mixing up the bread pudding 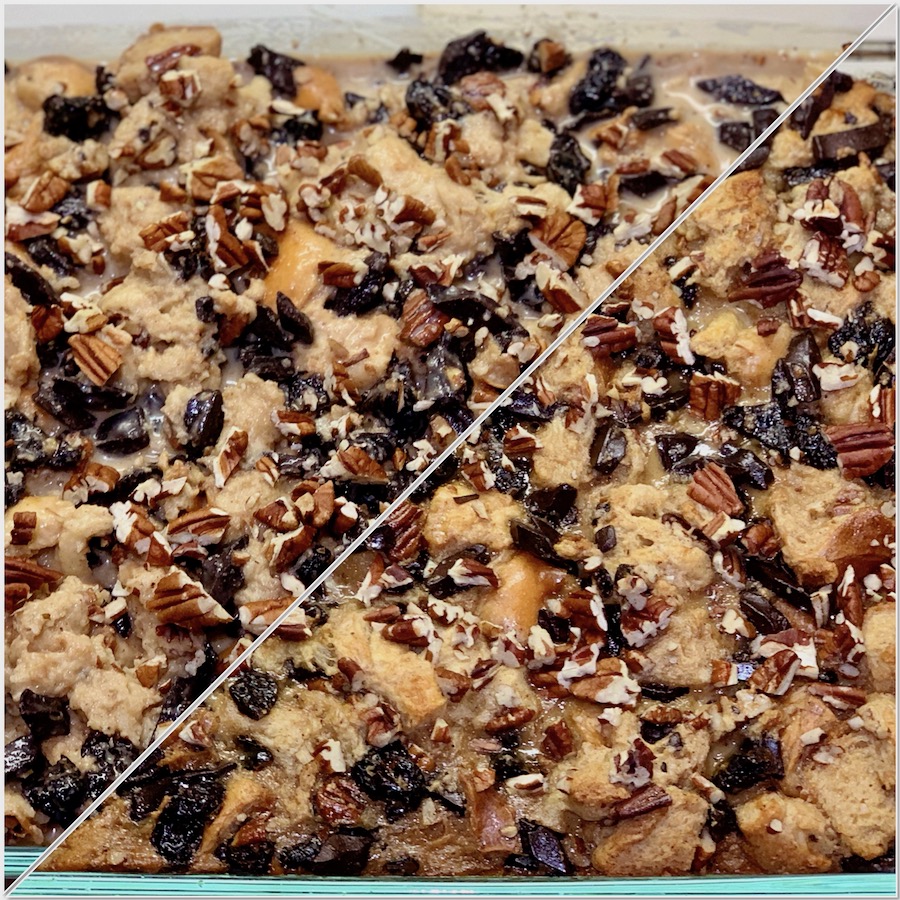 Before and after baking…everything is nice and toasty brown 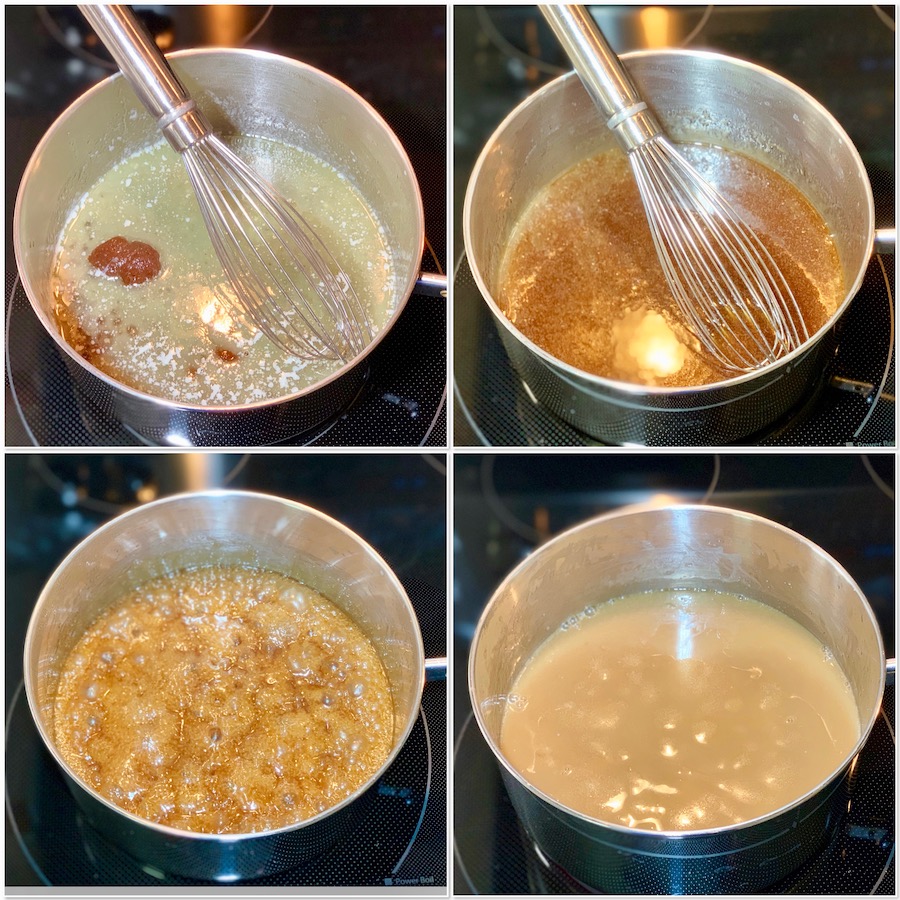 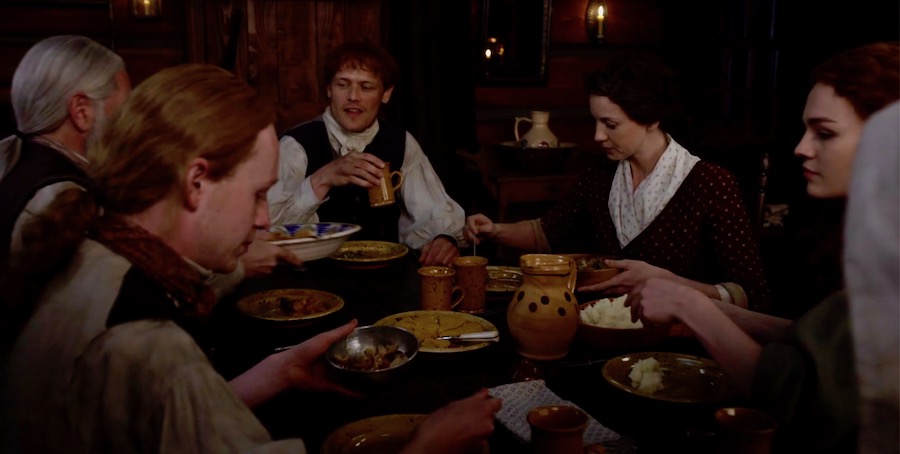 I’m not ready for Droughtlander!

As I go live with this post, I’m planning on serving this bread pudding to the Outlander Cast staff at a get-together before the finale party on Sunday. However, I did sample the whiskey sauce…rich, creamy with flavors of good Highland scotch (in this case, The Balvenie DoubleWood 12yr, something I served with Southern Brown Sugar Pie at the Season 4 premiere party I attended…good times). I poured the sauce on coffee ice cream…divine! So even though Droughtlander is almost here (waaaaa!!!), we can commiserate together with a big helping of bread pudding (and perhaps a wee dram of scotch). Droughtlander won’t last forever, and Season 5 is coming…J’est Sui Prest and Tulard Ard! 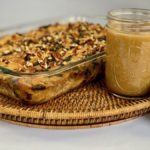 I liked the addition of nutmeg and cloves, but you can leave it out if you want. Also, I used 1% milk, but any type will do. The whisky may be optional in the custard and sauce, but I used it (do you really think I wouldn't?). If you do choose to follow my lead, make sure whatever whisky you use in the sauce is good quality and something you’d like to drink.  You can alter the mix-ins – I used dried cherries and chocolate chips, but you can use raisins, fresh or dried apples, apricots or any other fruit you’d like. Vary the nuts (how about almonds or walnuts?) or leave them out, use toffee or butterscotch chips for the chocolate or leave that out, too. It’s totally customizable and up to you! The Whisky Sauce will separate upon standing...just reheat it gently, either in a water bath (place the jar in a pot of simmering water) or in short bursts in the microwave on a low power setting, then stir. Bread Pudding can be frozen after baking (make sure the baking dish is freezer safe). Cool completely, then wrap well with a double layer of plastic wrap, then a double layer of foil, and freeze. Defrost in refrigerator overnight, then warm in oven before serving. Frozen bread pudding will keep 2-3 months. Did you make this recipe? Please share your pictures with the world on your social media…tag @outlandercast (on Instagram and Twitter) and use the hashtag #howtheymadeitoutlander. I can’t wait to see your creations!