How They Made It: Candied Pecan Whiskey Brownies (Ja-Brownies)

Welcome back to our occasional series, “How They Made It,” where we explore the food and drink of Outlander. This time we’re tweaking Lionel Brown and his gang with Ja-Brownies. Slainté!

Did your heart drop when Claire was kidnapped? Mine certainly did! As a book reader, I knew what was coming, but even that didn’t prepare me to see it portrayed.

For the record, I think the show did a masterful job in showing the horror of the event, yet focusing on how Claire mentally defended herself in her Dream-scape house and how she picked up the pieces afterwards. Well done!

One thing I did enjoy about the finale was sharing it with the Clan at Mary & Blake’s Virtual Finale party. It was during the after-show party that someone pointed out to Blake he missed a golden opportunity to call out Lionel Brown and his gang. Let me explain… 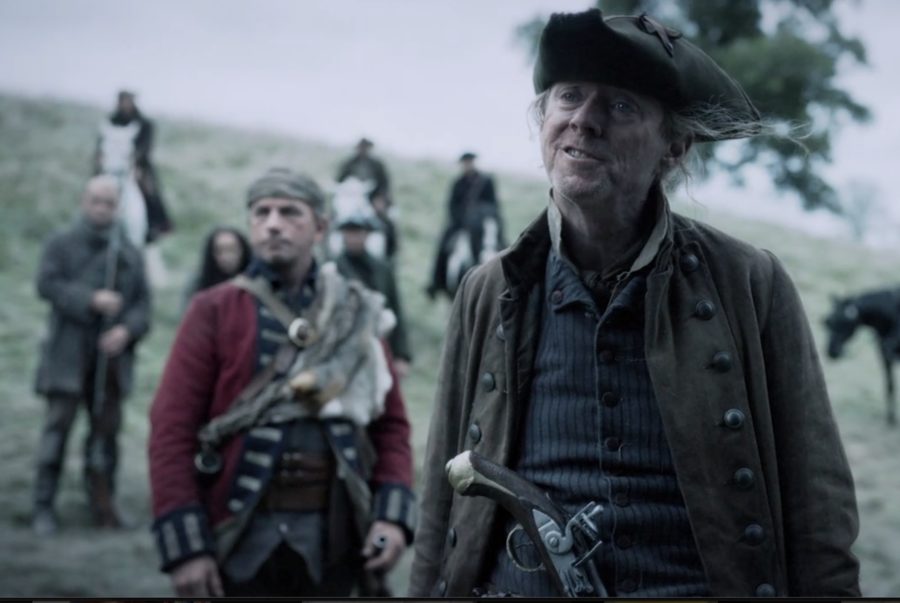 Blake is famous for calling someone a jabroni. But what exactly does that mean? From what I gather, there are two meanings:

Anyway, at the Virtual Finale after-party, a commenter mentioned that Blake should be calling Lionel Brown a “ja-brownie.” Such wordplay cleverness, I can’t even.

Mary and Blake loved it, and laughingly called out to me to make Ja-Brownies. Challenge accepted!

Creating the recipe for Ja-Brownies

Here’s how I decided to make this recipe. I went with several themes.

Obviously it had to be a brownie, but I thought a Dark Chocolate Brownie would be good way to represent the bad-guy-ness of  Brown’s gang.

Oh, and since their diversion was to blow up Jamie’s whiskey still, these brownies were going to have whiskey in them. I used as inspiration my Dark Chocolate Bourbon Brownies recipe. 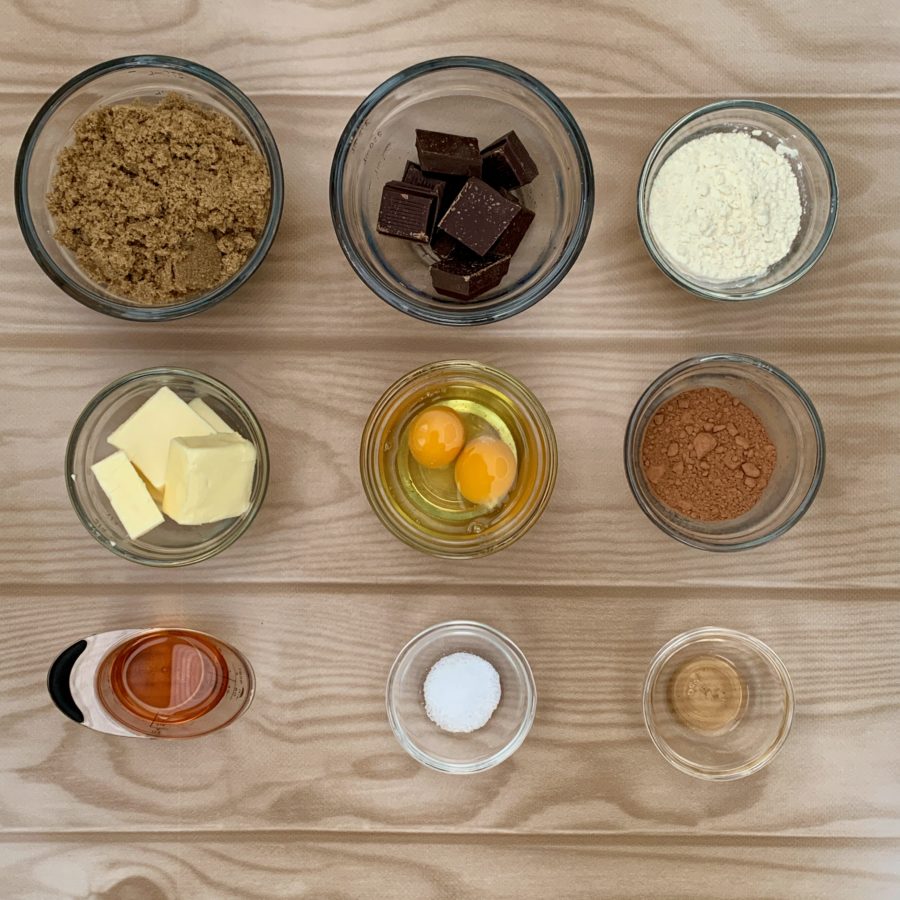 In order to spice up the drama, and have a nod to the North Carolina setting, I included spicy candied pecans both in the brownie and as a garnish. 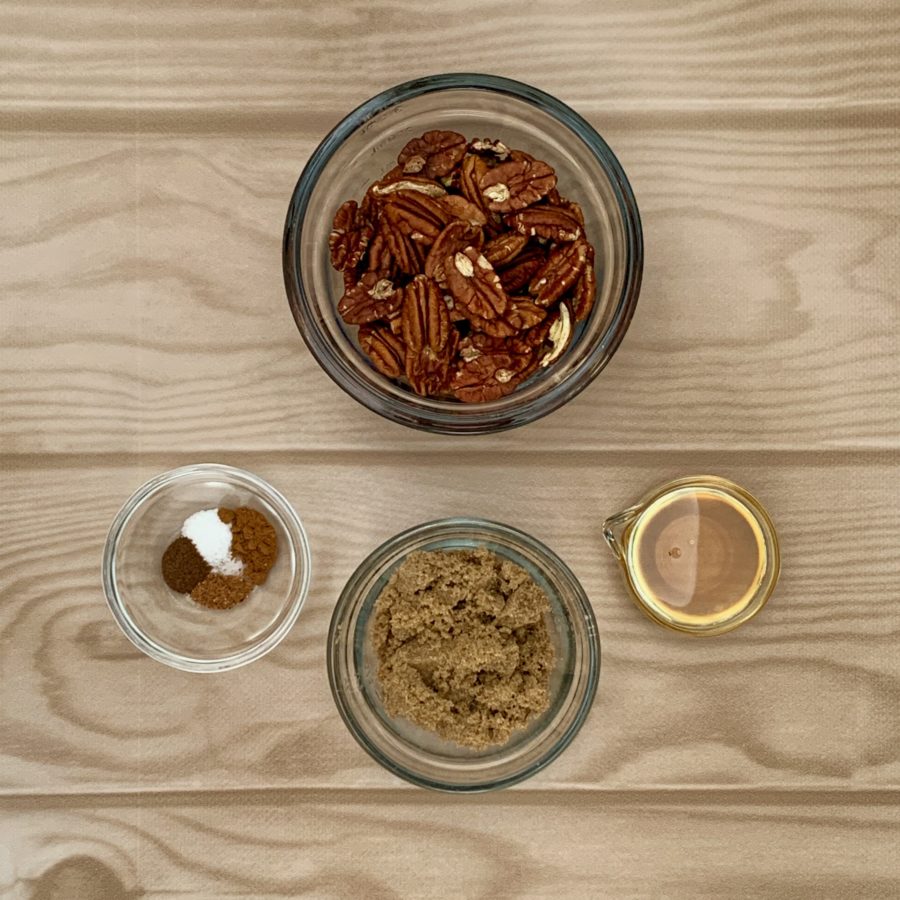 So, Ja-Brownies will be also known as Candied Pecan Whiskey Brownies. Take that, Brown gang meanies!

Side note: You might notice that I’m spelling whiskey with the ‘e’ here, unlike in my Discovering Scotch through Outlander primer, where I spelled it whisky without the ‘e’. It’s convention…whisky from Scotland doesn’t have an ‘e’, while American whiskey does. If you want to learn more, head over to my Whisky or Whiskey? discussion.

As you might imagine, making Candied Pecan Whiskey Brownies has two major steps. Namely, making the candied pecans, then baking the brownies. (Thanks, Captain Obvious!)

Let’s take it in order, shall we?

Making the candied pecans goes very quickly, but you need to pay attention. Make sure that the brown sugar syrup is bubbling vigorously before adding the pecans, and is almost evaporated after the pecans have been cooking for a couple of minutes.

Seriously, this whole process takes about 5 minutes, and cooling them on the baking tray about 15 minutes.

If you don’t cook the syrup long enough before adding the pecans (like me, the first time I made them), the pecans will dry but will be very sticky. You can rescue them by putting them in a 325°F oven for 5 to 15 minutes; then let them cool again. 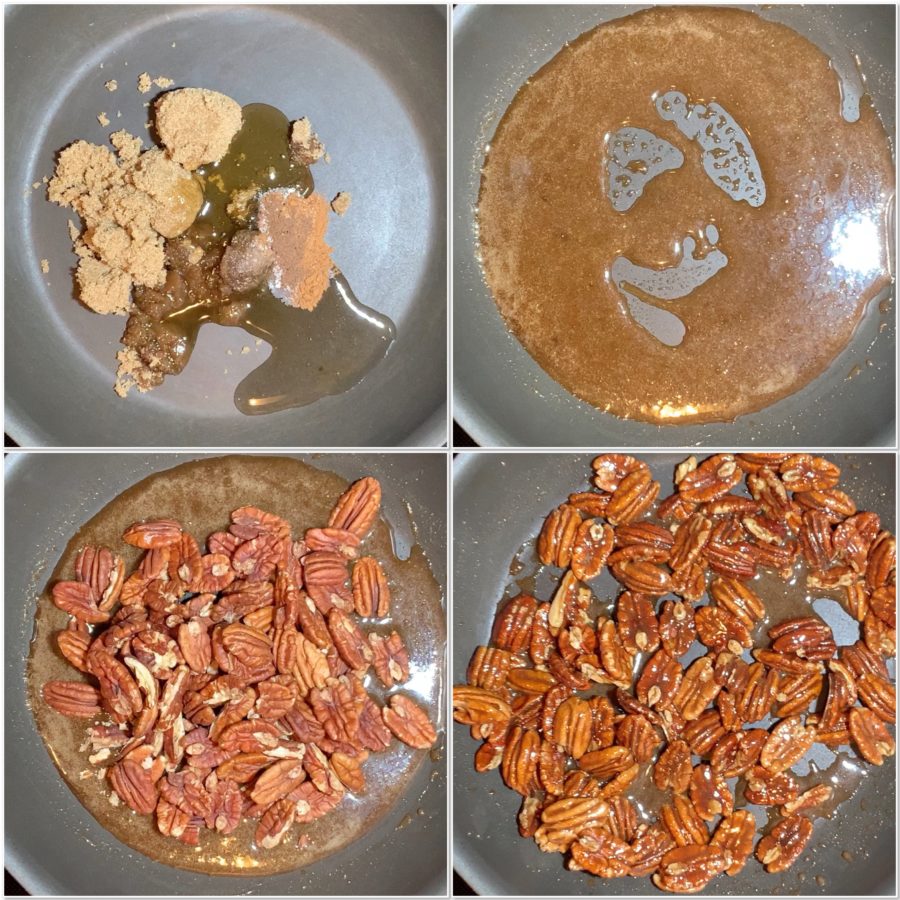 Spread the hot pecans in a single layer on a Silpat silicone mat or parchment paper. Don’t use wax paper as the wax will melt, and you don’t want that.

Chop the pecans after they’ve cooled, but be careful…the pecans are hard and you don’t want your knife to slip.

Making Whiskey Brownies is a one-bowl process. Melt butter & chocolate; then add the rest of the ingredients in order. Easy Peasy.

You can adjust the amount of whiskey in the brownies to suit your taste. If you want an alcohol-free version, you can substitute in strong coffee or espresso (which will give the brownies a subtle mocha flavor), or just leave it out altogether and increase the vanilla extract. 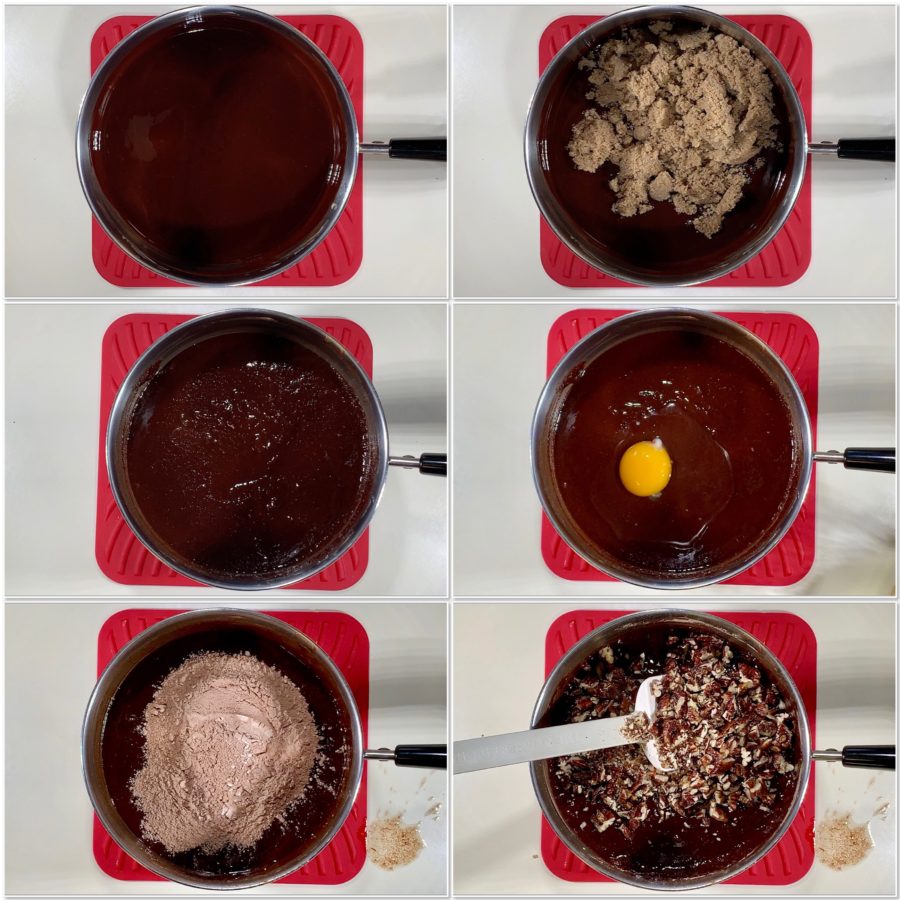 The brownie batter comes together easily 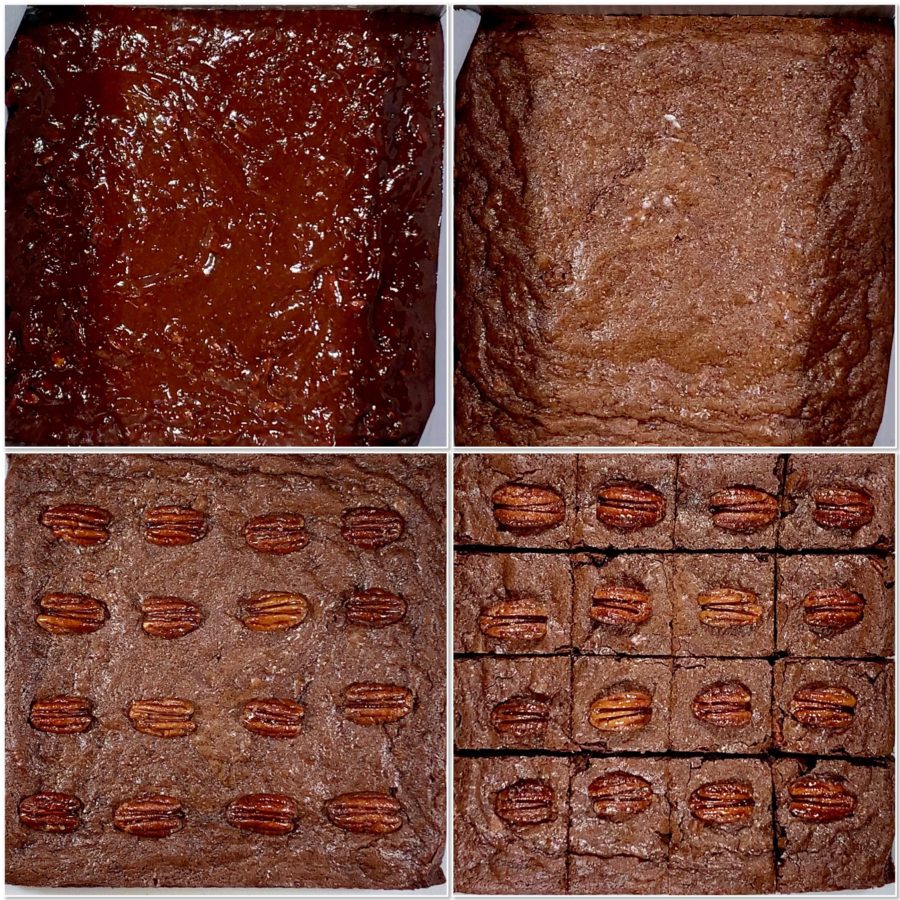 Candied Pecan Whiskey Brownies before & after the oven

The subtle flavor from the whiskey or bourbon you choose will peak out under the chocolate, especially a peated whiskey. You can experiment with different versions of your favorite whiskey. Try using different expressions of scotch, or a liqueur like Kahlua, an Irish cream whiskey, or your favorite spirit. Have fun! 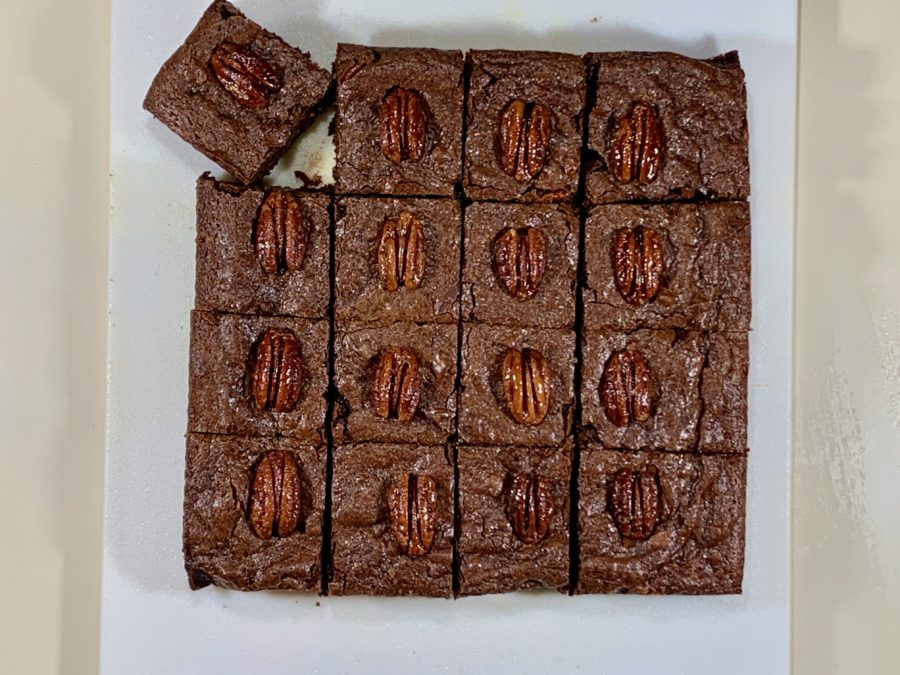 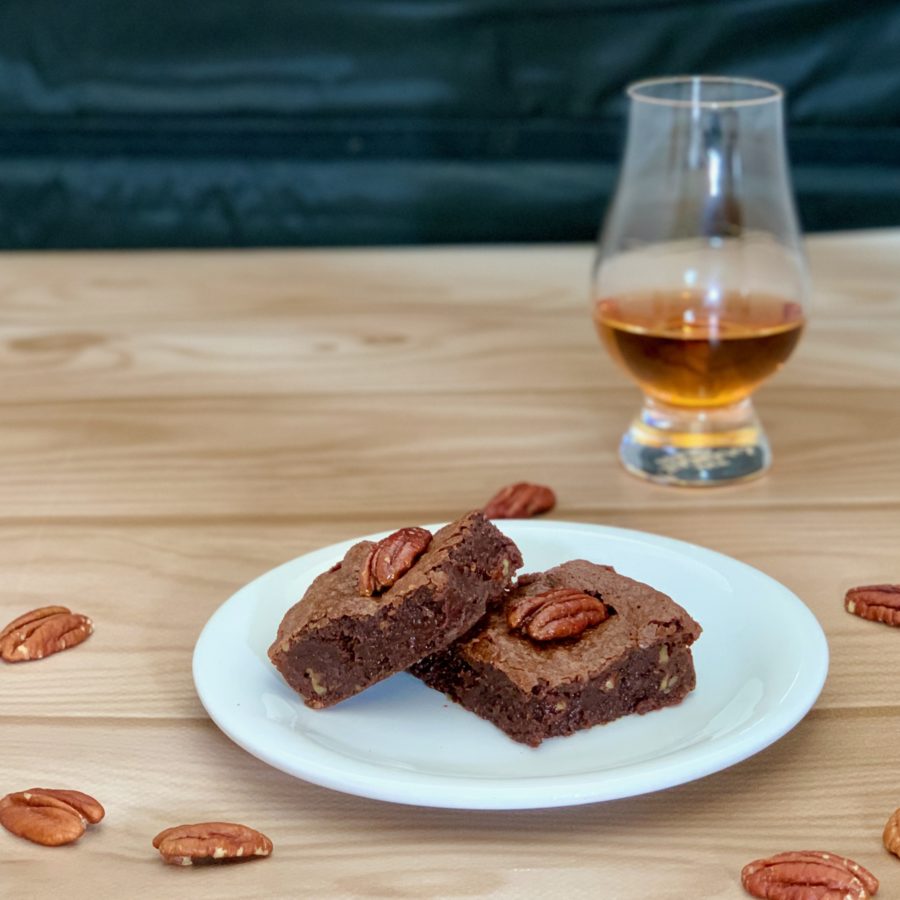 A wee dram of whiskey to have with the brownies

A wee dram of the whiskey you used in the brownies makes for a great pairing. In this case, I used Henry McKenna 10 year Bottled-in-Bond bourbon. Good stuff, that!

So there you have it…my nose-tweak to Lionel Brown and his band of jabronies!

Alas, Droughtlander may be here for a while. But we can still re-watch Outlander Season 5 with a snack to munch, from Port Wine Chocolate Cake for the wedding to these Ja-Brownies at the finale. Slainté!

What do you snack on during Outlander? 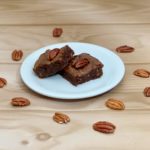 For the candied pecans

I used semisweet chocolate and standard cocoa powder for these brownies. If you prefer, you can use 72% dark chocolate and dark chocolate cocoa powder (like for these brownies). The subtle flavor from the whiskey or bourbon you choose will peek out under the chocolate, especially peated whiskey. You can experiment with different versions of your favorite bourbons. Try using different expressions of scotch, or a liqueur like Kahlua, an Irish cream whiskey, or your favorite spirit. Have fun! You can adjust the amount of whiskey to suit your taste. If you want an alcohol-free version, you can substitute in strong coffee or espresso (which will give the brownies a subtle mocha flavor), or just leave it out altogether and increase the vanilla to 2 tsp. When making the candied pecans, don’t use wax paper to spread them out to cool because the wax paper will stick to them. For the brownies, you can melt the butter and chocolate in the microwave in 30 second bursts. Stir after each interval until the chocolate is melted. Did you make this recipe? Please share your pictures with the world on your social media…tag @outlandercast (on Instagram and Twitter) and use the hashtag #howtheymadeitoutlander. I can’t wait to see your creations! 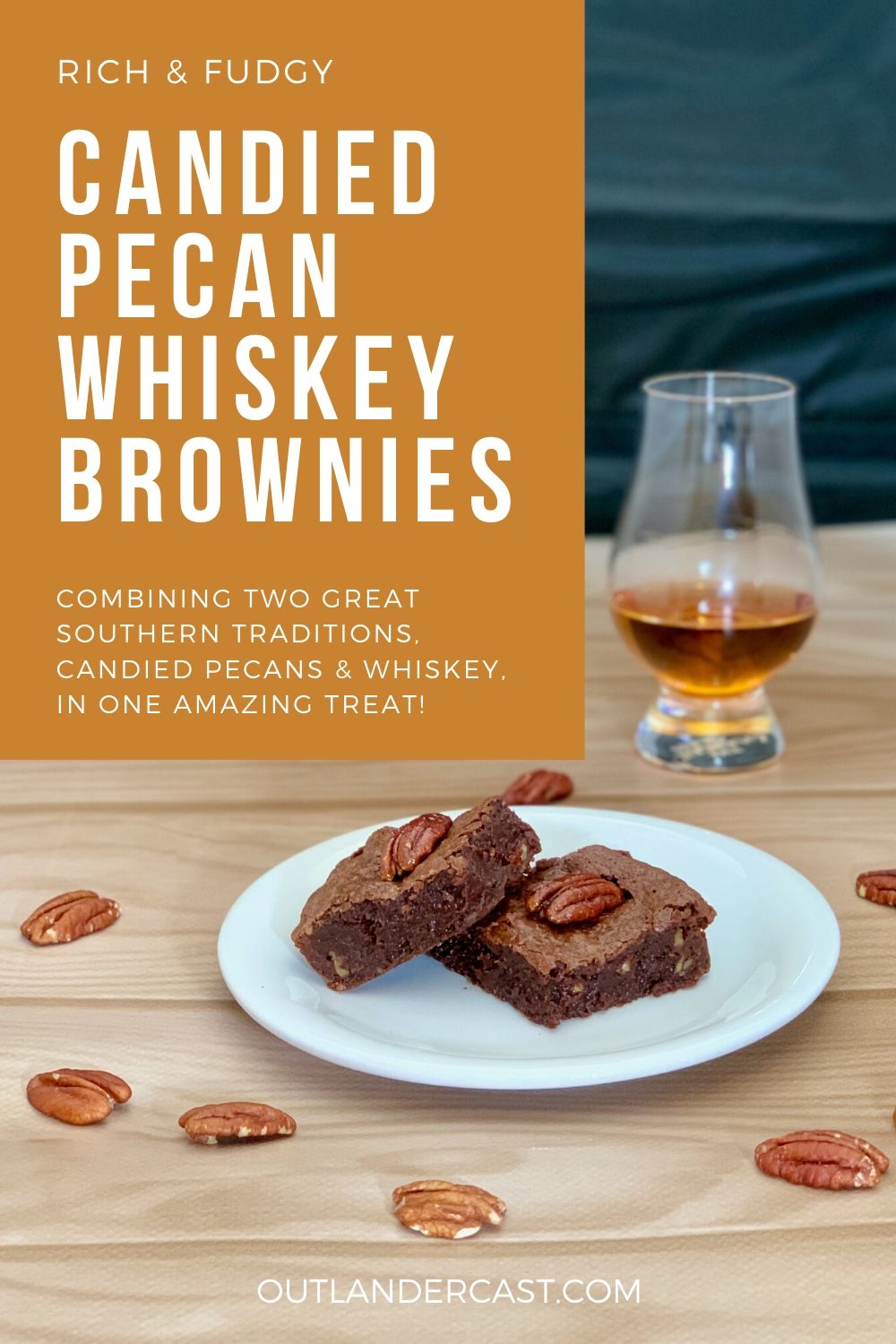