This drink would be at home in Jocasta's pergola

How They Made It: Classic Rum Punch from River Run

Welcome back to our occasional series, “How They Made It,” where we explore the food and drink of Outlander. This time we’re toasting Jocasta & Duncan with classic Rum Punch. Slainté!

I don’t know about you, but I need something to celebrate. Not just for what’s happening IRL (in real life…I had to ask my daughters), but the last few episodes have been serious. Great (in my opinion), but serious.

So let’s go back a few weeks to Jocasta’s wedding to Duncan in Outlander Episode 6, “Better to Marry than Burn.” Wasn’t that a grand affair? That outdoor pergola was beautiful. The music, the food, the drinks… 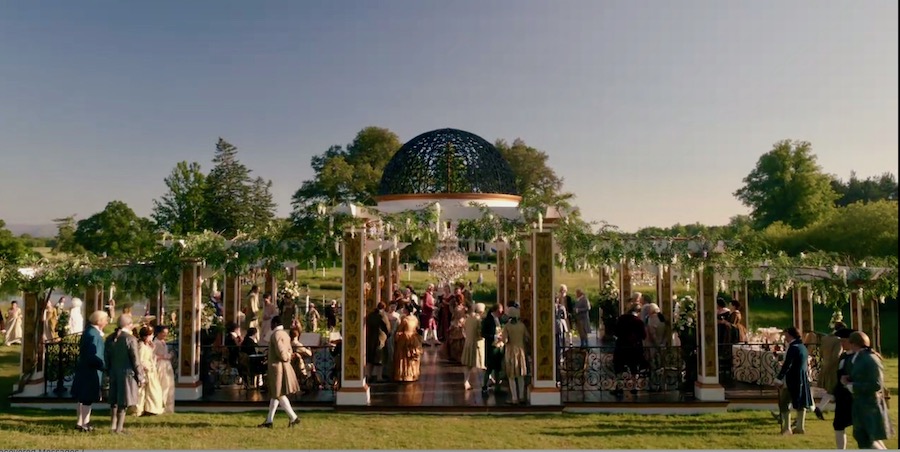 What a beautiful setting for a wedding celebration (photo credit: Outlander STARZ Season 5)

A different sort of Rum Punch

Here I must break off and say that as beautiful as the setting was, the descriptions of the food and drinks in the book were quite detailed. One drink stood out to me as I was reading those chapters…Jocasta’s classic Rum Punch.

When I think about Rum Punch, pirates and fruity tropical drinks come to mind. Think a Daiquiri or maybe Grog. However, what Jocasta would have served at her wedding celebration would have been quite different.

Here’s how Diana Gabaldon wrote it, “Jocasta’s rum punch was made not only with the usual rum, sugar, and butter but also with dried currants, the whole concoction being mulled with a hot poker.” (Fiery Cross, Ch. 42, “The Deasil Charm“)

What’s being described is a hot drink, a classic Rum Punch that’s more like what I’d call Hot Buttered Rum. Having never had it, that’s what I set out to make for you. You’re welcome.

Oh, and I made the drink in a china cup similar to what Jocasta used for her wedding guests (in the book, at least). No tropical umbrellas here! 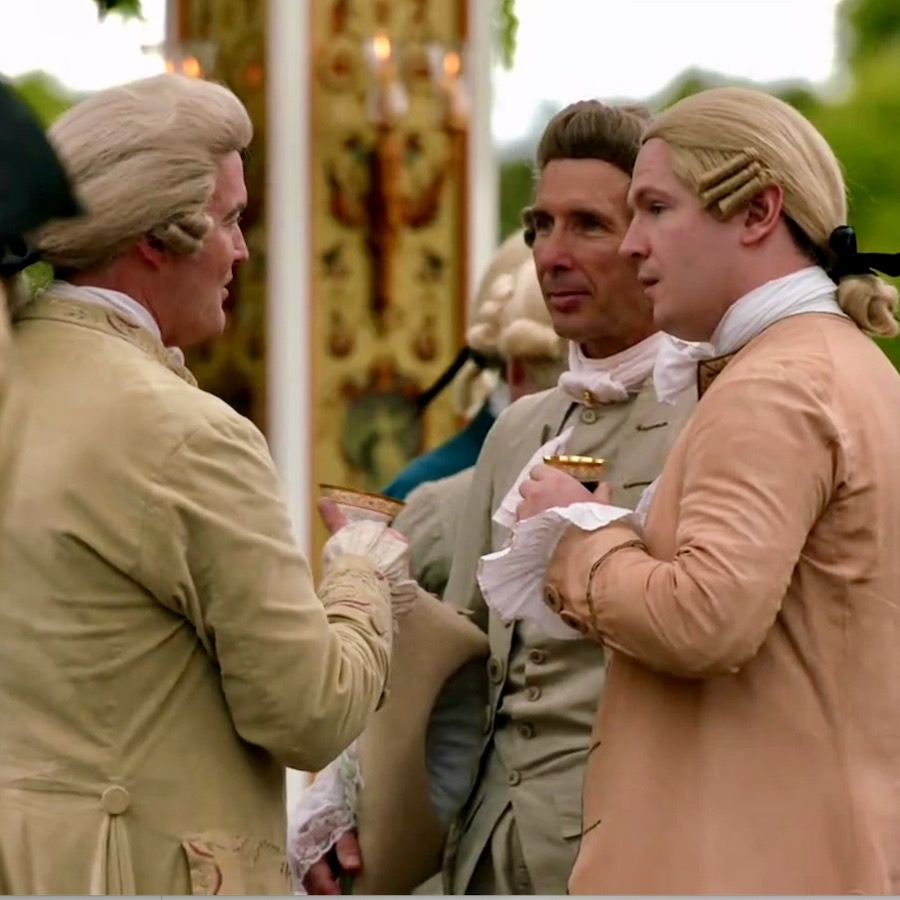 Jocasta wouldn’t have had any trouble procuring rum. It was quite prevalent in 18th century Colonial America. New England dominated rum distilling in the period through the sad practice of the “Triangle Trade” (rum, molasses, and slaves). In North Carolina during that time, distilling spiced rum began with Moravian settlers in the Winston-Salem area.

According to The Kitchn, “Rum’s popularity in early America is immortalized in the mixed drinks of the era. Philadelphia Fish-House Punch … features Jamaican rum among its several potent potables. Drinks like Black Strap (rum and molasses) and Hot Buttered Rum (rum, sugar, spices, and, yes, butter) were also part of the early canon.”

So rum and rum drinks dominated the colonies along with beer. It’s only when molasses began to be scarce during the war that other grains started to become more popular to distill.

Enough history…let’s get to the drink itself. I adapted Sugar, Glitter, & Spice’s Hot Buttered Rum recipe for our purposes.

How to make Classic Rum Punch

The amount of work required to make this drink is minimal. Basically you’re making a sweet spicy butter, and melting it with boiling water into rum. Add a splash of orange juice and it’s ready. (Well, the fruit has to show up somewhere, and I don’t have any currants…um…currently). 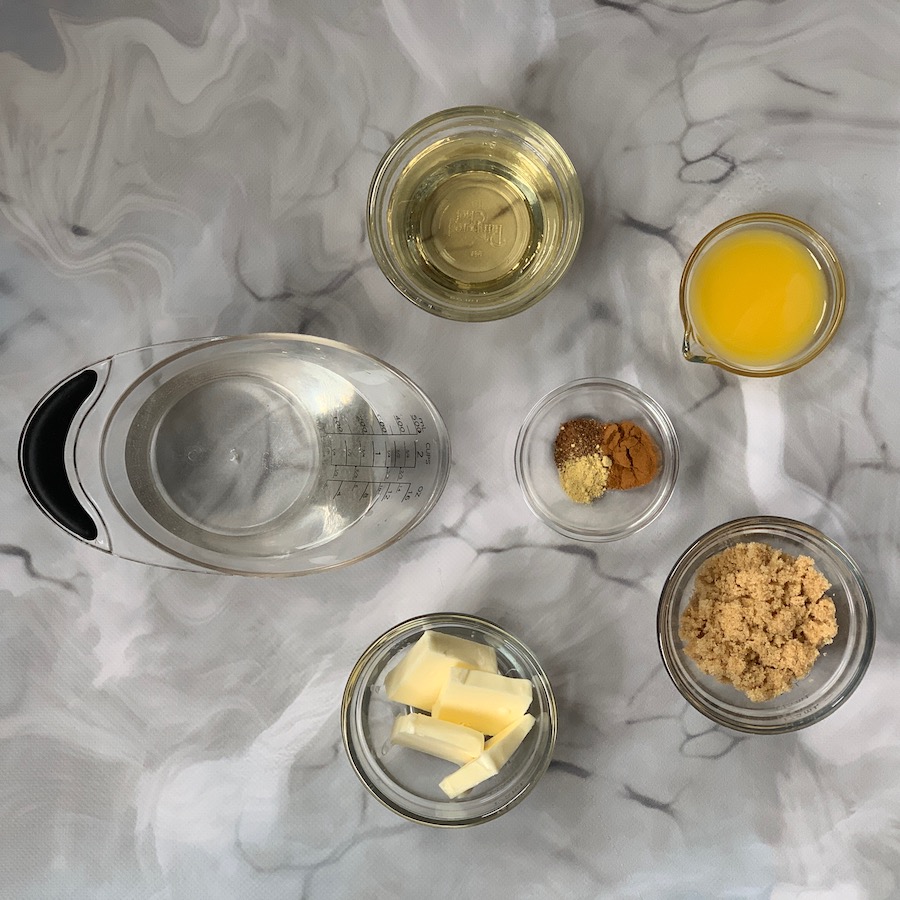 The ingredients for Classic Rum Punch

When beating the butter, brown sugar and spices together, it helps to have the butter softened to room temperature. 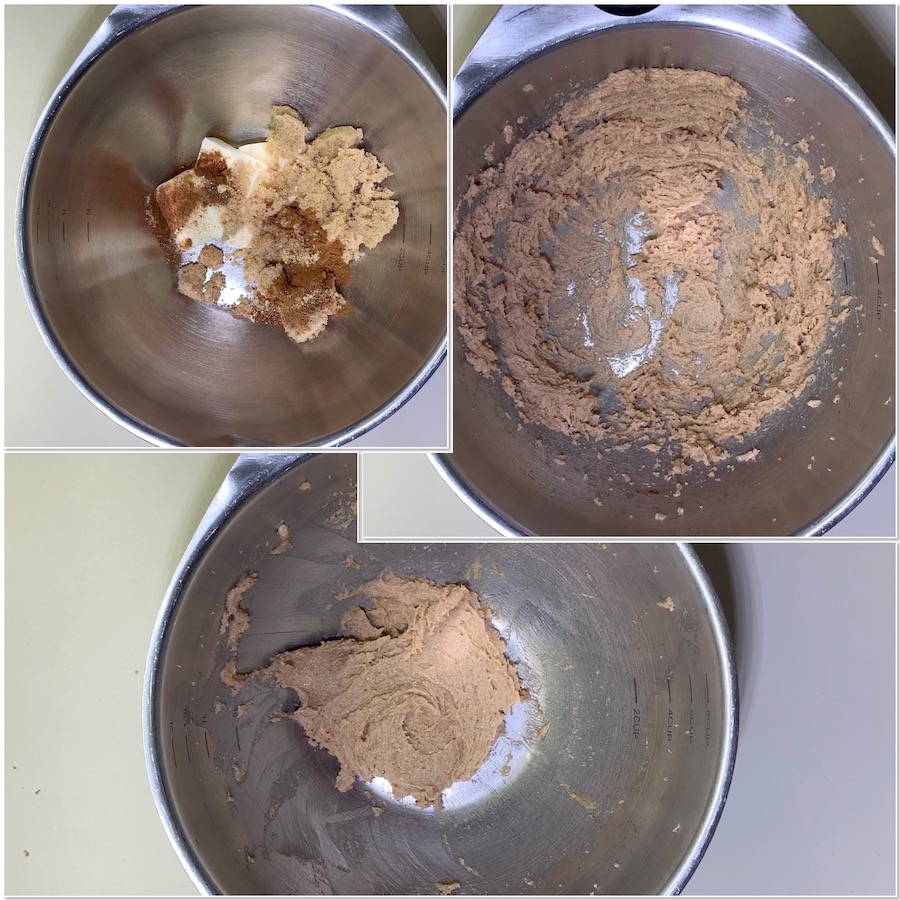 To assemble the cocktails, put in as much of the spiced butter as you’d like, usually 1 to 2 Tbsp. Same with the boiling water…use as much as the cup will hold. Just make sure the spiced butter is thoroughly melted before proceeding.

Have leftover spiced butter? Spread it on toasted Sourdough Spice Cake or Maple-Walnut Scones. And if you’d prefer, you can substitute any dark liquor, like whiskey or scotch, for the rum. Hot Buttered Scotch, anyone? 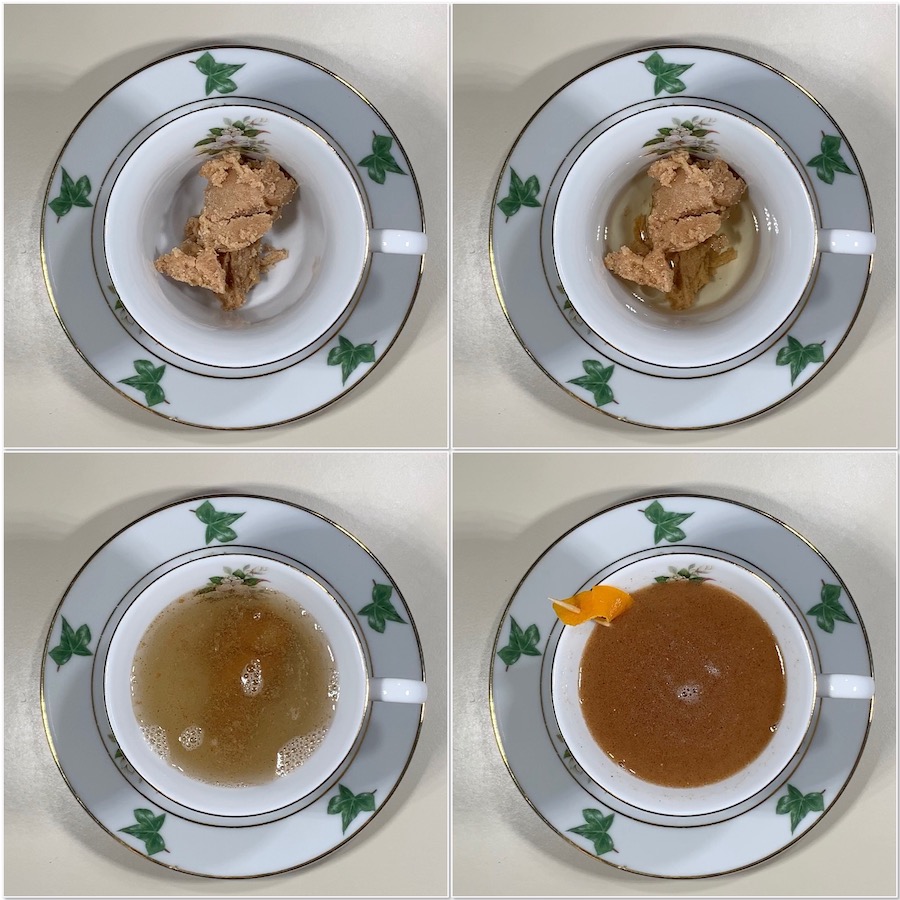 Assembling the rum punch is a easy as mixing and melting.

Classic Rum Punch is delicious. Hot, rich, and spicy, with a kick of rum to add interest, it’s perfect for a classy wedding, or just a chilly evening. Served in a china cup, I felt quite grand (even if I was just watching the wedding, rather than attending it). 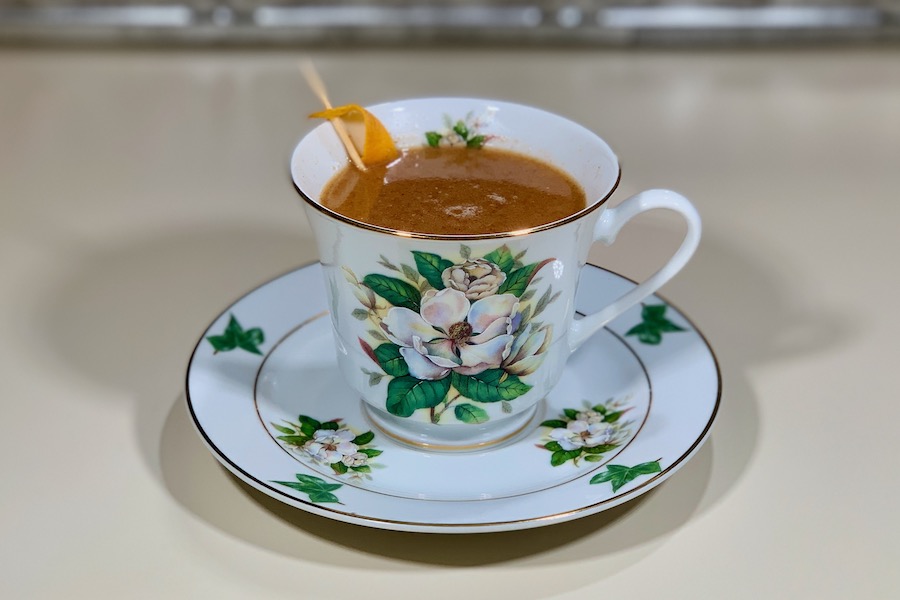 This rum cocktail would be at home in Jocasta’s pergola 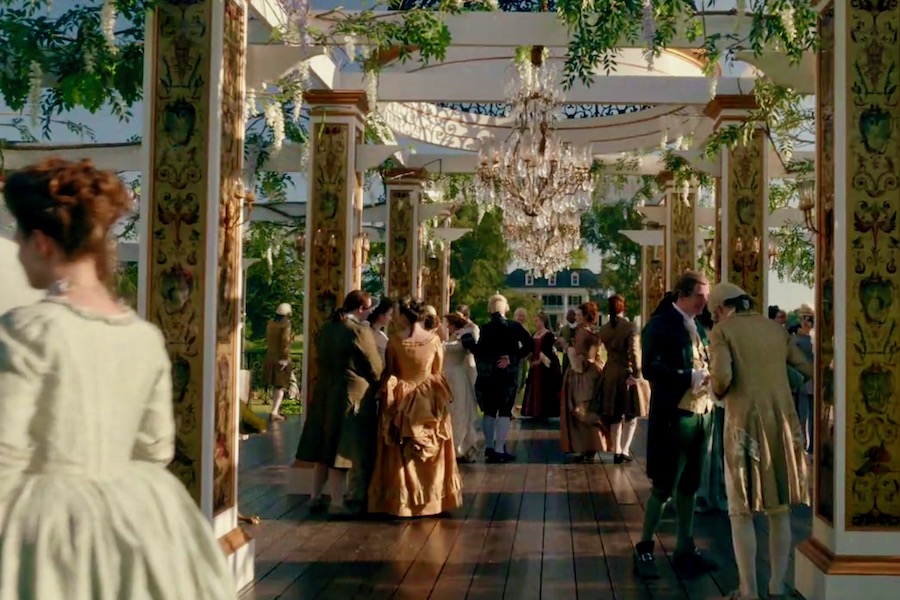 What kind of cocktails are you making these days? Do tell! 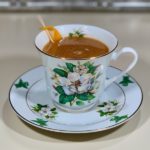 For the spiced butter

The spiced butter can be refrigerated up to one week. Bring the butter to room temperature before making cocktails so it doesn’t cool the cocktail. Any leftover butter can be used as a spread. Try it on toasted Sourdough Spice Cake or Maple-Walnut Scones. You can substitute any dark liquor, like whiskey or scotch, for the rum. Hot Buttered Scotch, anyone? Did you make this recipe? Please share your pictures with the world on your social media…tag @outlandercast (on Instagram and Twitter) and use the hashtag #howtheymadeitoutlander. I can’t wait to see your creations! 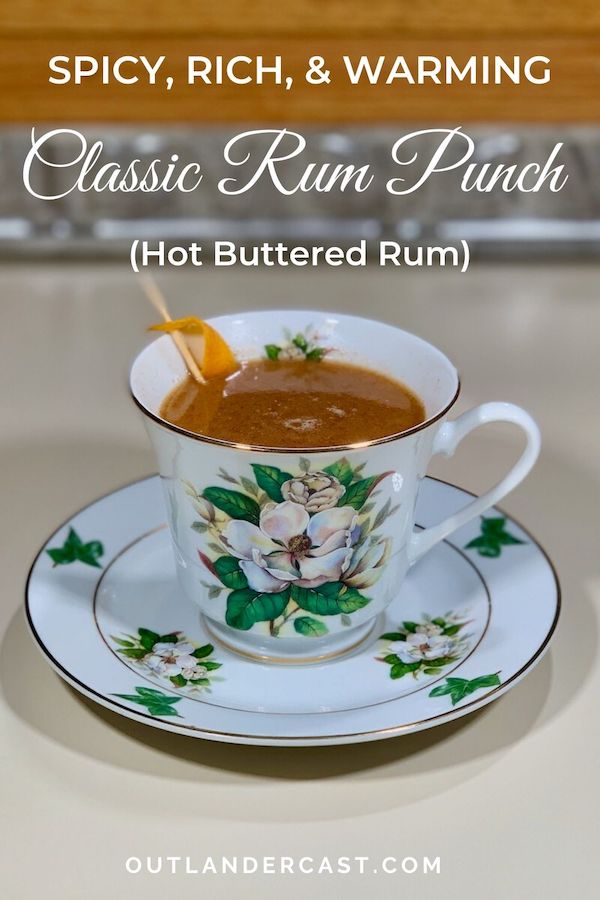