How They Made It: Apple Crisp with the Randalls from Outlander

Welcome back to our occasional series, “How They Made It,” where we explore the food and drink of Outlander. This month we’re serving an Apple Crisp to celebrate Fall with the Randalls. Slainté!

Thinking about Thanksgiving with the Randalls

Last year at this time I talked about how Brianna, growing up in Boston, would probably have coerced Claire & Frank into celebrating Thanksgiving.

Like Sourdough Spice Cake and Praline Pumpkin Pie, desserts featuring apples are especially popular in the fall, when apples are at their peak. I can imagine Bree insisting upon some form of apple dessert at their Thanksgiving dinner, even during those post-war years, and Frank would be happy to indulge her (I have an active imagination, so work with me here).

But what form would that apple dessert take? How about an Apple Crisp rather than the traditional apple pie? 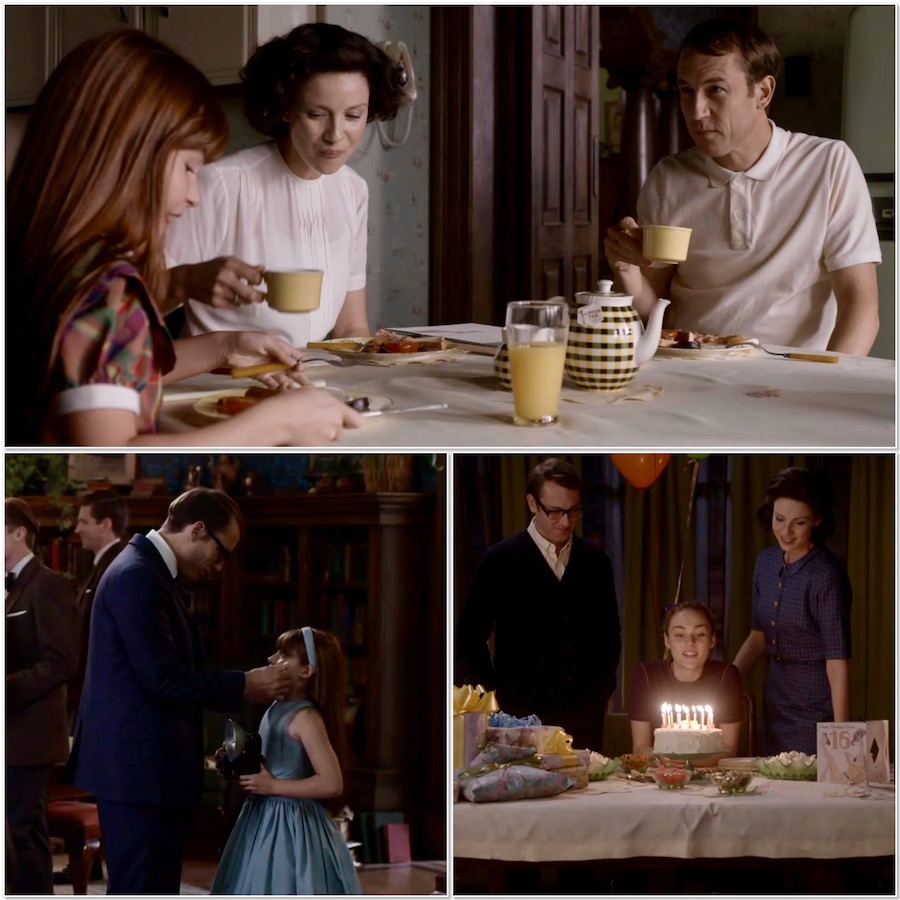 I think Frank would indulge Brianna’s wish to have Thanksgiving dinner with all the trimmings. (photo credit: Outlander STARZ Season 3)

In the US, an Apple Crisp is basically the filling from an apple pie with a crumbly buttery topping. That streusel topping is made from oats, flour, brown sugar and butter.

Over the Pond, a similar British pudding is known as an Apple Crumble, where topping made of butter, flour and brown sugar is rolled together so that it resembles breadcrumbs. Both are served warm with custard sauce or ice cream.

Apple Crisp doesn’t have a long and storied history like, say, egg custard.

According to my favorite internet source, Wikipedia, “the first printed mention occurred in 1924 with a recipe in Everybody’s Cook Book: A Comprehensive Manual of Home Cookery by Isabel Ely Lord.

There was also a recipe for Apple Crisp in a newspaper article in the Appleton Post Crescent on Dec. 9, 1924. During WWII, when rood rationing limited access to pastry ingredients, apple crisps gained in popularity.”

An instant classic, to be sure!

Apple crisps are easier to make than apple pies — there are no pesky pie crusts to trip you up. You just make the filling, mix together the streusel topping and bake. Simple as that!

I found King Arthur Flour’s Classic Apple Crisp recipe, and used a combination of sweet and tart apples. I like Honeycrisp and Granny Smiths together, but you can use any apples you’d like. I also included pecans in the streusel topping because I like the combination of the soft, buttery oats and the crunchy nuts. Adding nuts is optional, but such a good addition! 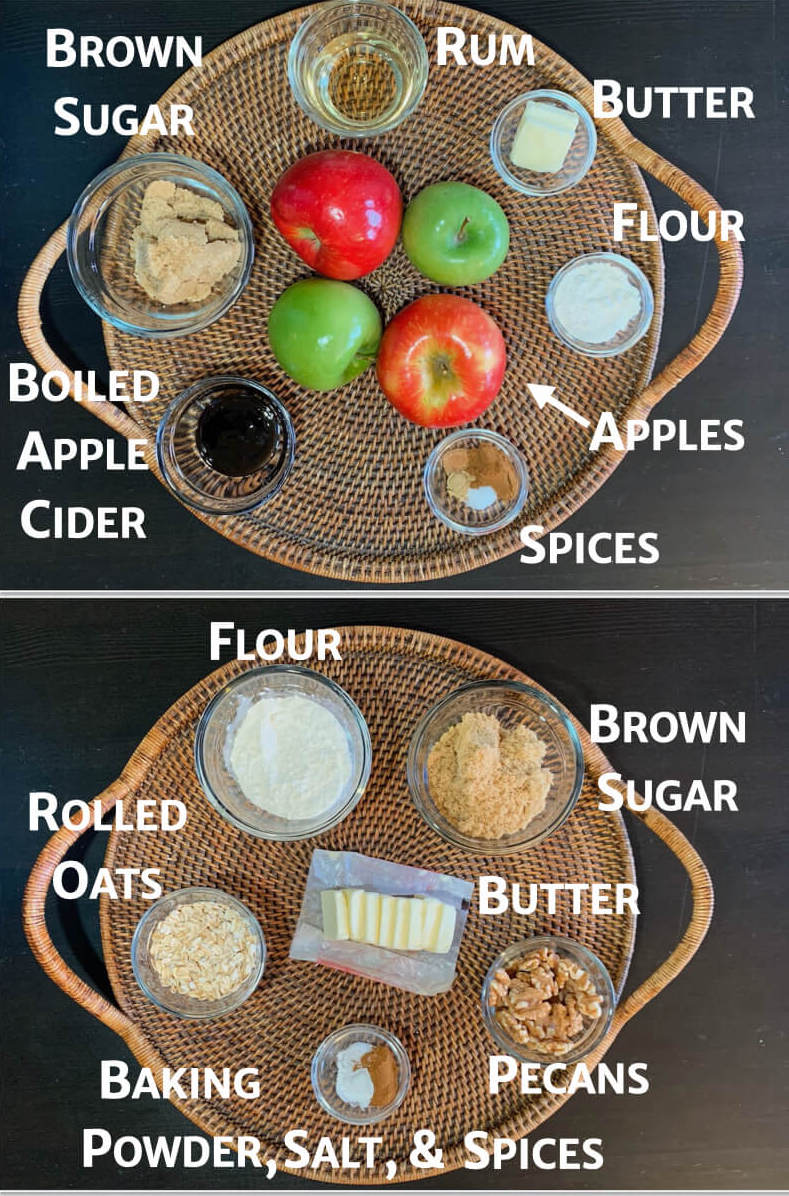 Buy enough apples to yield two pounds of peeled, cored and sliced apples (about nine cups when you’re done). An apple peeler/corer/slicer makes quick work of getting the apples ready. Unfortunately, mine is in storage, so I went with a knife and melon baller.

Hey, whatever gets the job done, right? 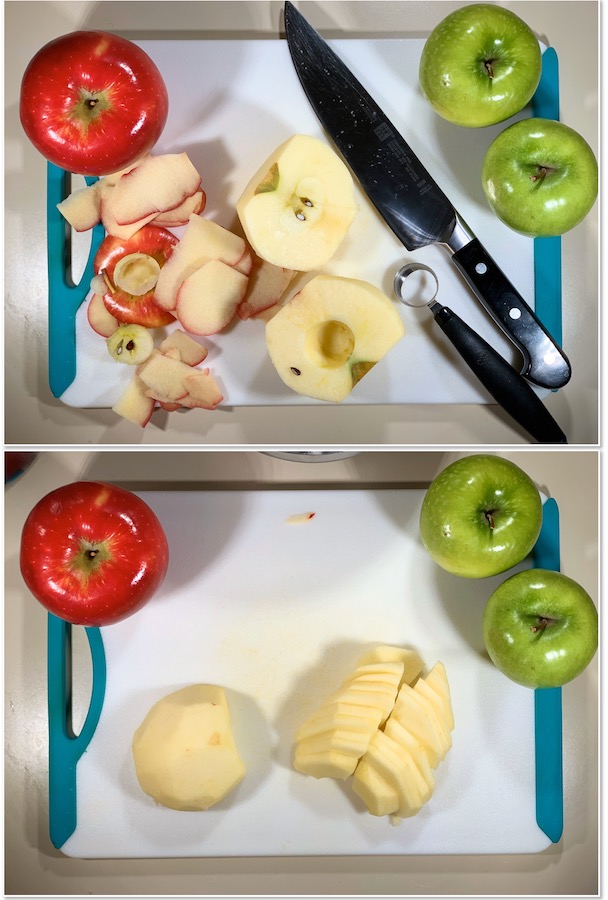 Even when making do with the tools at hand, slicing the apples didn’t take too long

Here’s another hint: to really boost the overall flavor, I highly recommend using boiled apple cider in the filling; it has an extra zap of apple flavor. You can buy boiled apple cider from King Arthur Flour, but it’s really easy to make it yourself (all you need is apple cider and some time).

Also, you can get creative with the liquid in the filling, just be sure to choose something that will complement the apples and cinnamon. Try rum, bourbon, hard or straight apple cider, or apple juice. You can even use water in a pinch.

I used a fruity white table wine that had notes of green apple for this batch, and will probably go with bourbon next (yep, I like to bake with booze). 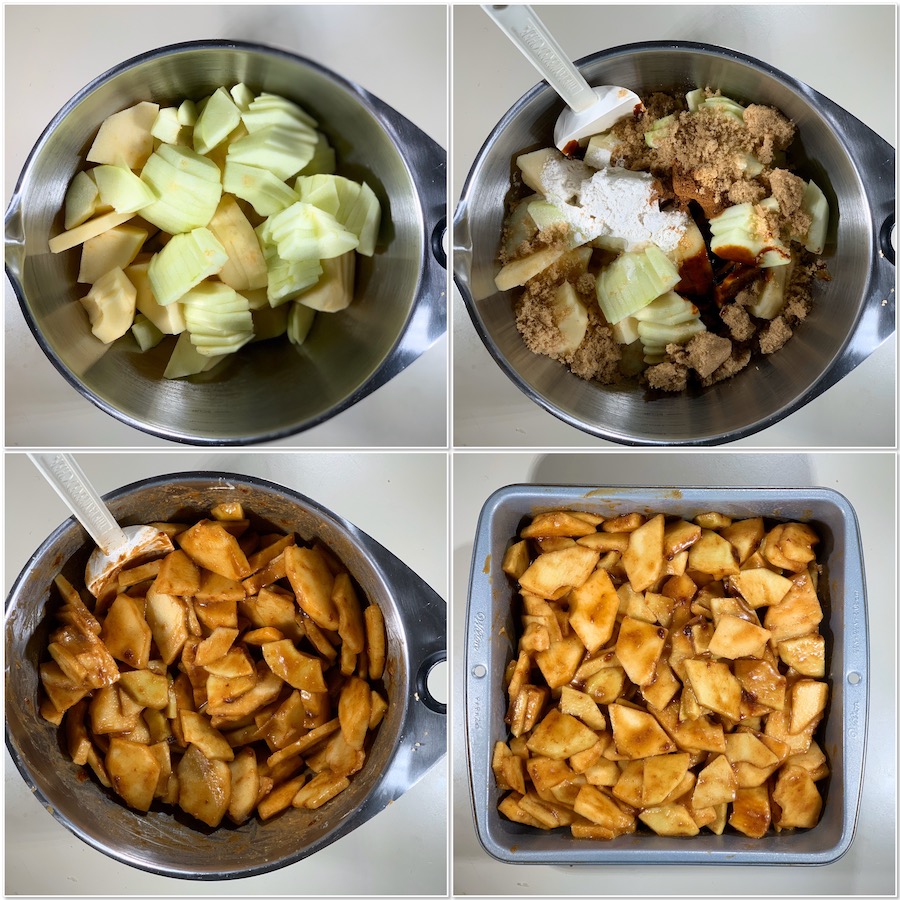 The recipe called for quick-cooking rolled oats. If you only have old-fashioned rolled oats on hand (as I did), run them through a couple of pulses in a small food processor to break them up a bit (to mimic quick cooking oats). It may not be absolutely necessary, but it doesn’t hurt. 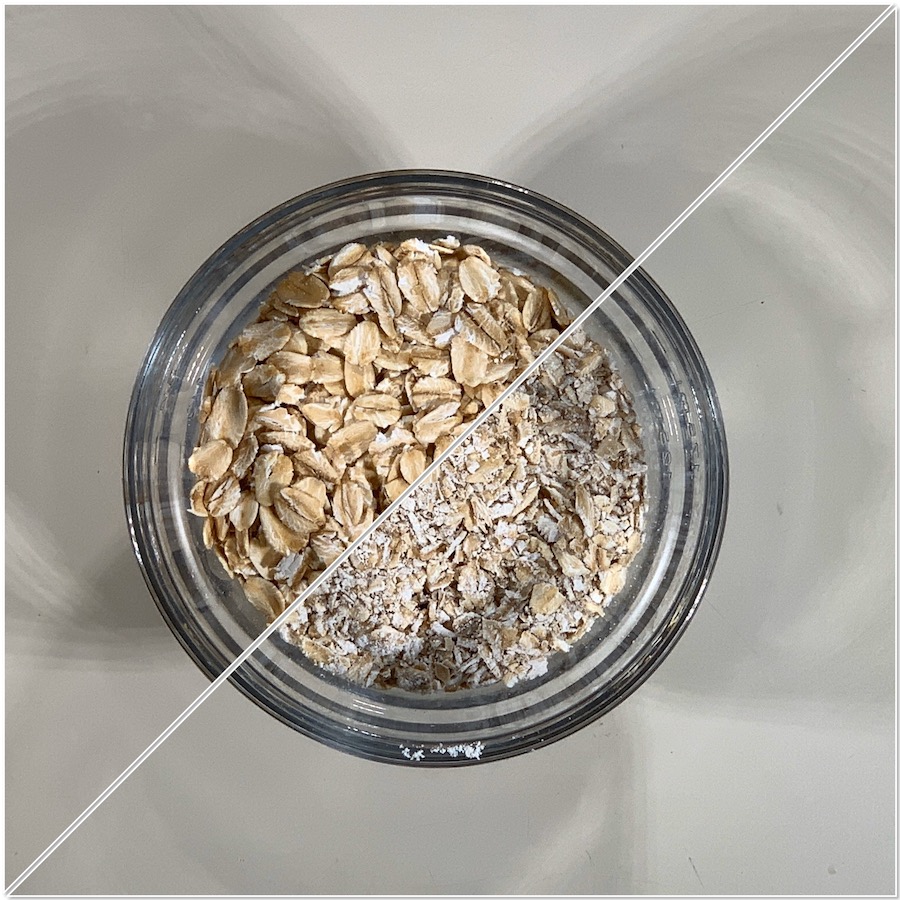 For the streusel, mix up the dry ingredients, then cut in the butter until the mixture resembles coarse crumbs (think pie crust before you add the water). Finally, mix in the nuts if you’re using them. Easy peasy! 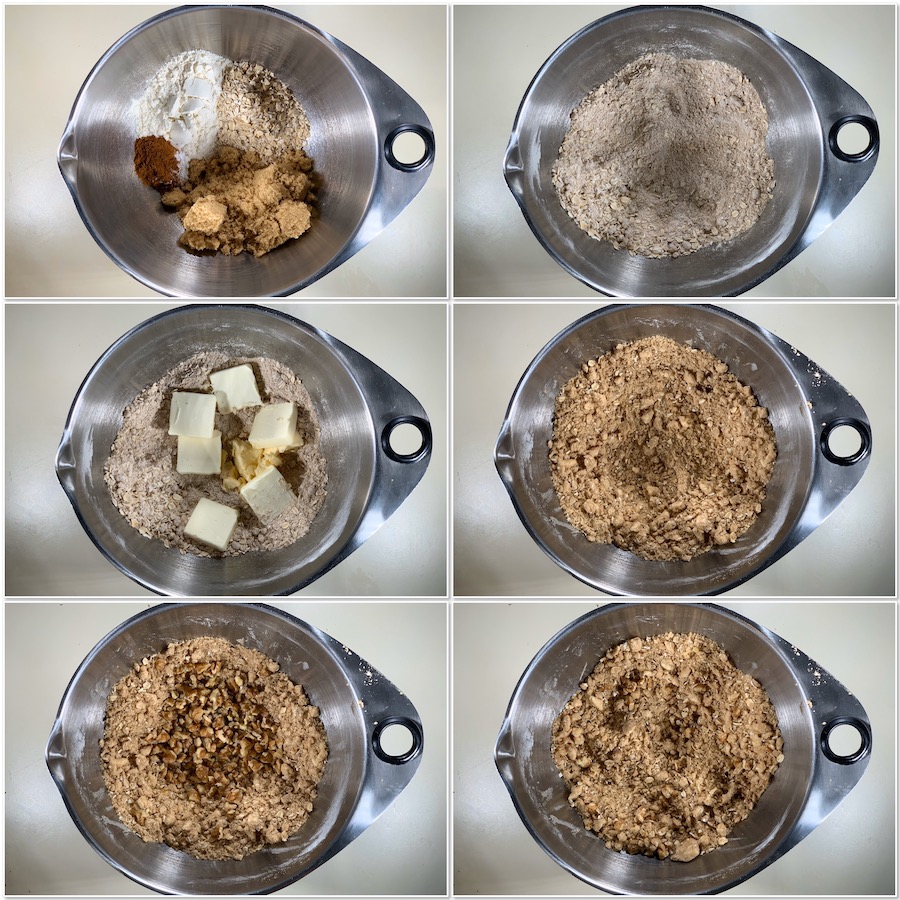 Mixing up the streusel topping

Spread the streusel over your filling, then bake until the topping is golden brown and the apple filling is bubbling. 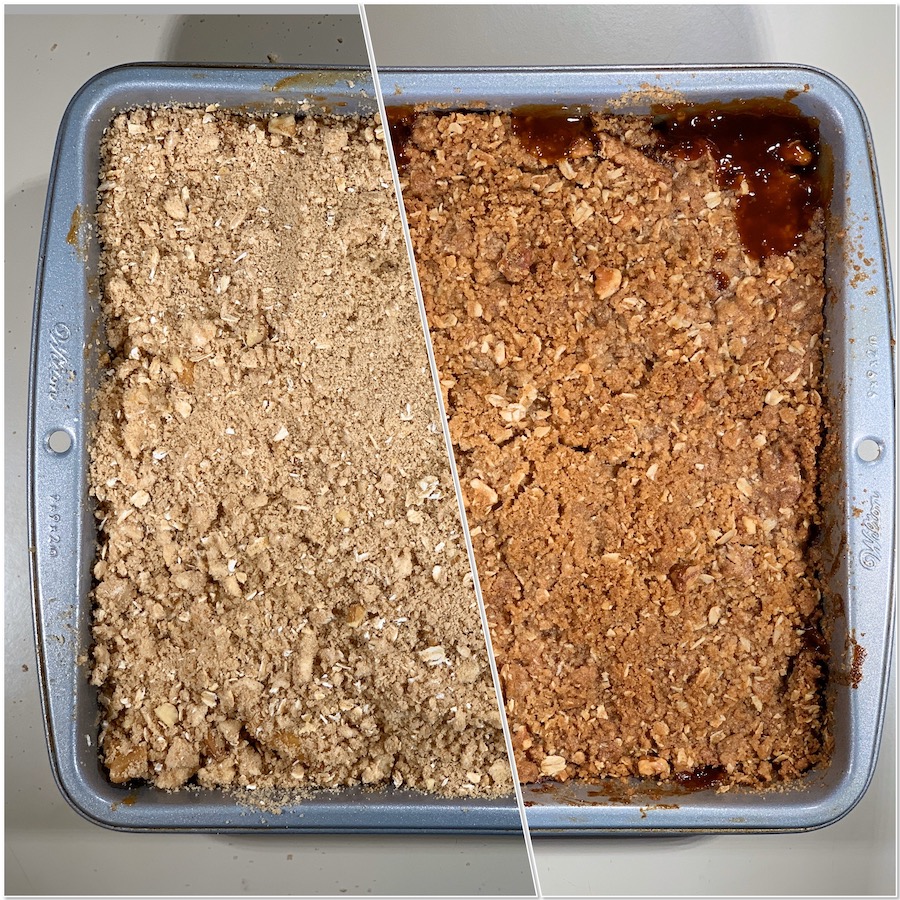 Apple crisp or apple crumble… either way it’s a hit!

This Apple Crisp had an intense apple flavor, sweet and spicy that contrasted nicely with the crunchy, buttery topping. Serve it with a scoop of vanilla ice cream or sweetened whipped cream.

Just for funsies, and definitely not because it was sitting in my refrigerator calling out to me, I added a drizzle of Salted Caramel Sauce. 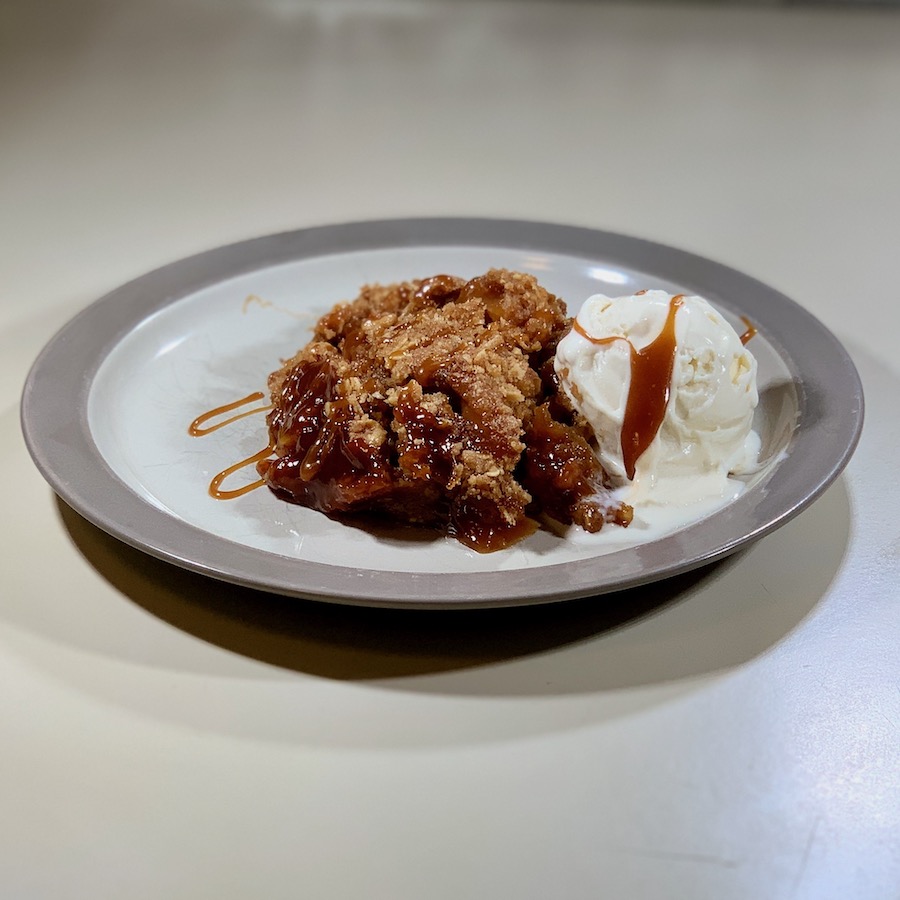 We know how much Frank wanted to indulge Brianna, and Apple Crisp was easy enough for Claire to throw together. Okay, maybe they would have called it an Apple Crumble, but I won’t quibble. Either way, I think their Thanksgiving wouldn’t have been complete without one.

Super easy and incredibly tasty, this comforting dessert deserves a place at your Fall festivities, whatever they may be. I know it will be at our Thanksgiving table!

What is your favorite Fall dessert? Something with apples? Pumpkin? Pecans? Or something else entirely? 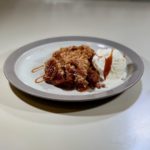 For the streusel topping

Buy enough apples to yield 2 pounds peeled, cored, and sliced apples (about 9 cups when you're done). An apple peeler/corer/slicer would make quick work of getting the apples ready. Unfortunately, mine is in storage, so I went with a knife and melon baller. Get creative with the liquid in the filling, just be sure to choose something that will complement the apples and cinnamon. Try rum, bourbon, hard or straight apple cider, or just apple juice (you can even use water in a pinch). The amount of brown sugar you'll use in the filling will depend on the sweetness/tartness of your apples. I used Honeycrisp and Granny Smith apples (which are sweet and tart, respectively), so I went down the middle and used 1/2 cup of brown sugar. I highly recommend using boiled apple cider in the filling. It has that extra zap of apple flavor that really kicks this Apple Crisp up a notch. You can buy it from King Arthur Flour, but it’s really easy to make it yourself. You can substitute 1 1/2 tsp of Apple Pie Spice for the cinnamon, nutmeg, and ginger if you have that on hand. To make individual crisps: Spray with baking spray eight 8-ounce bowls, and proceed with the recipe accordingly, baking the smaller crisps for 45 to 55 minutes. To make an Apple Crisp for Two: For the filling, use 1 to 2 apples and half the amounts of the spices (leave the liquid the same, just let it cook down). For the topping, use 2 tablespoons each of flour, brown sugar, rolled oats, butter, and nuts; 1/2 teaspoon cinnamon, 1/4 teaspoon baking powder, and a pinch of salt. Bake in a 6 1/2-inch cast-iron skillet for 10 to 12 minutes. Did you make this recipe? Please share your pictures with the world on your social media…tag @outlandercast (on Instagram and Twitter) and use the hashtag #howtheymadeitoutlander. I can’t wait to see your creations! 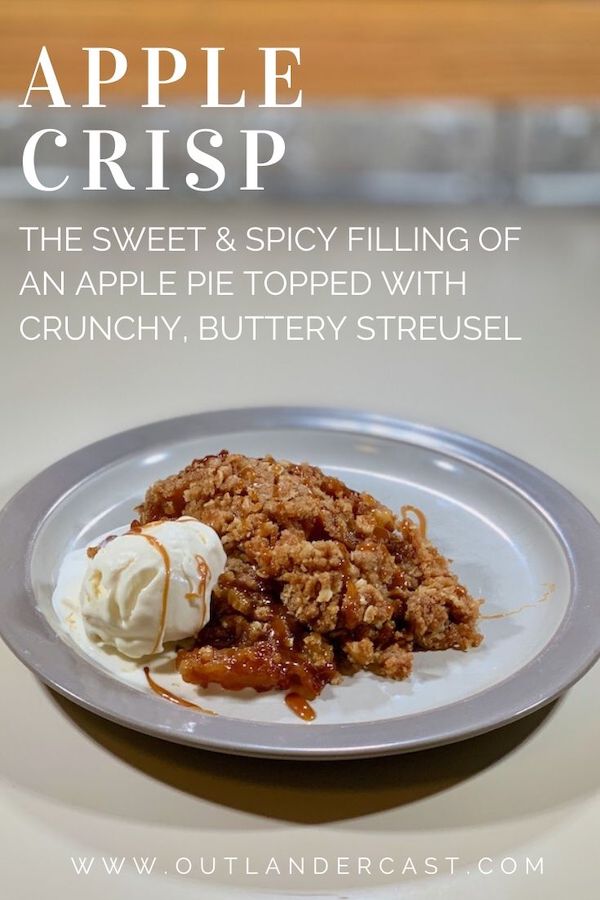 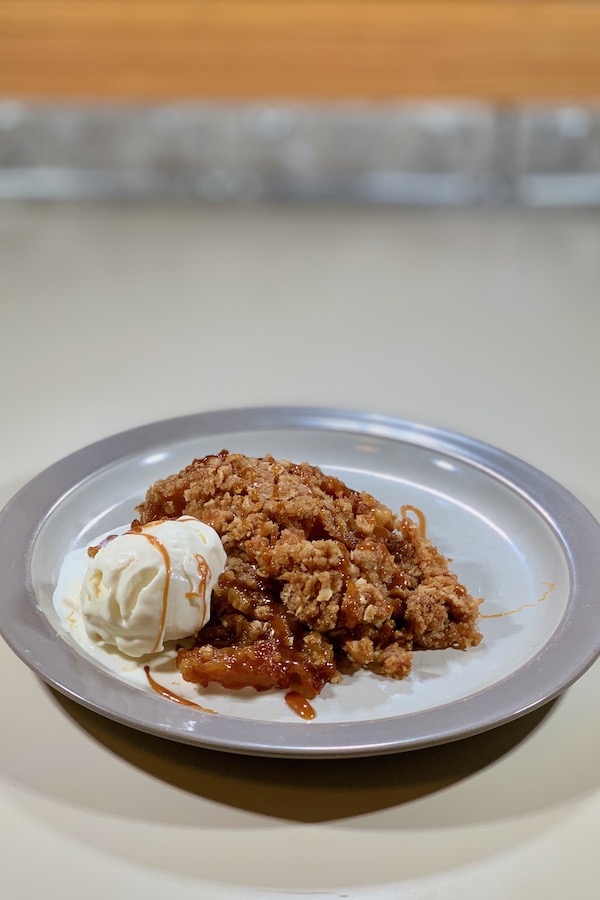