Outlander’s latest episode packs an emotional punch, shouldered heavily by a quartet of worthy performances by the braw men of Fraser’s Ridge.

Episode 603, Temperance, is anything but temperate. The intimacy, the intrigue, the intensity—it was all there.

And who brought it? The braw men of Fraser’s Ridge, that’s who – the Ridge Fearsome Foursome, the Three Musketeers and d’Artagnan, the Laird and his entourage. Whatever designation we use, ruler of the Ridge, Jamie (Sam Heughan), his son-in-law, Roger (Richard Rankin), his nephew-practically-a-son, Ian (John Bell), and his adopted son, Fergus (Cesar Domboy), were fierce, loyal, and creative.

To paraphrase a popular line from the second book in the Outlander series, Dragonfly in Amber…
Diana Gabaldon, you gave us some braw men and, God! We’ve loved them well.

What about the Ridge Women, you ask?

Yes, I love the women of the Ridge, too. I do! They’re all bonnie, fierce, loyal, and creative as well.

With one notable exception, of course: the newcomer, Malva Christie (Jessica Reynolds). I would never wish even a fictional character harm but I’m getting some serious Wednesday Addams (Christina Ricci) vibes from Miss Malva. *shudder* How did she wrangle walks in the forest with both Ian and Jamie on the same day? Stalker much? Could she be a witch like her mother? 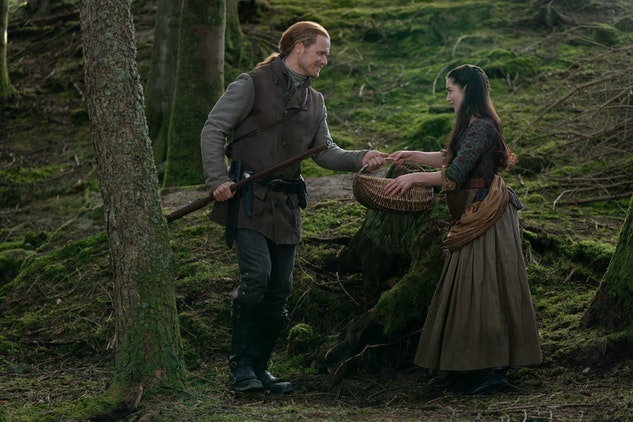 Yes, the women are wonderful, but it’s the laird and his entourage who melted my heart in Temperance. In this episode, Jamie, Roger, Ian, and Fergus were the personification of this quote by B.J. Neblett: “We are the sum total of our experiences.”

We saw their courage and ingenuity that has been forged over their individual life journeys from their beloved Scotland to the American Colonies.  We saw their fear as well, yet despite that, they did what they must, as parents do for their children.

First up, Fergus. Get a beverage, pull up a chair. We’re gonna be here a minute.

Fergus, Jamie’s mon enfant, his mon fils, has had a life. From his humble birth and early childhood in a Parisian brothel to his marriage to another of Jamie’s adopted children (it wasn’t as creepy as it sounds) to his station as master distiller of Fraser’s Ridge. It’s been quite a journey from boy to husband to father. We’ve seen bits and pieces of that turbulent young life in the brothel before he was rescued by Jamie and his wife, healer Claire (Caitriona Balfe). Through darkly traumatic experiences, being sexually abused by the sadistic Black Jack Randall and then losing a hand by the sword of a dastardly Redcoat soldier, Fergus persevered with extraordinary courage.

That is, until this season, when he becomes plagued by fear and self-doubt, seemingly drinking pretty much all the whisky he makes, unable to hide his misery or to keep his promise of abstinence made to his pregnant wife Marsali (Lauren Lyle). The birth of son Henri-Christian, born with a perceived physical disability, sends him into an even deeper depressive state. Looking far into the future, he envisions a horrible plight for his son, when there would be no one who loves him there to protect him.

Fergus becomes inconsolable, convinced everyone would be better off without him, ready to end it all. But Jamie is there, somehow in the right place and at the right time, and fiercely fights – figuratively and literally – to reach through the fog of depression, to pull Fergus from his depths of despair with loving words spoken as only a parent can. With heart and damaged body lovingly attended to by Jamie and Claire, Fergus reunites with Marsali and Henri-Christian, filling our hearts with hope.

I predict a new batch of whisky in season 7, wildly popular with everyone, except Fergus, of course. I think they should label it ‘Finest: by Fergus.’

Cesar’s intensity as heartbroken Fergus in this episode is marvelous. His performance in the scene where Claire tries to console him, eerily similar to the moment long ago when he shared he had been sexually assaulted, was one of the most outstanding single scenes in this series to date. Simply brilliant. Surely someone with the power to nominate him for an award will do so. 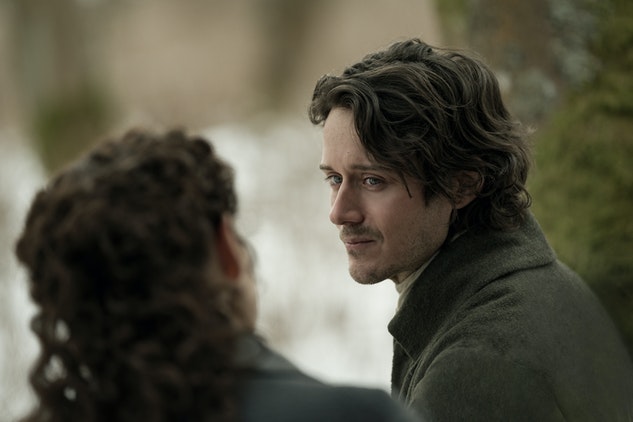 Richard Rankin as Roger also brought it on this episode. After his courageous water rescue of wee Henri-Christian, sent downriver in a basket like Moses by his brother Germain (Robin Scott) and a group of his misinformed friends, he was ferocious. “Trouble him again and Satan’ll pop up and drag you screaming to hell.”

As a parent of children who were that age more than a few years ago, I had to giggle at his choice of a fire and brimstone reprimand. Hey, whatever works, right?

Then, Roger Mac, you melted my heart, walking with Germain to round up his fellow scoundrels as instructed by Grandpere Jamie, whose idea of punishment is a bit different. More on that later.

Speaking of hearts, Roger’s seems boundless, muckle-sized. Accompanying Germain to the McCallum cabin to fetch one of those lads, Mrs. McCallum’s (Joanne Thomson) son Aidan (Caleb Reynolds), he hears the woman cry out inside the cabin. He bravely checks the source of her distress – a covered bowl of “haunted” milk. Please tell me I’m not the only one who started singing “Joy to the World” a la Roger Season 5 when he pulled that frog from the bowl. Rescuer of babes and critters, that’s our Roger.

Above that big heart, there’s a sharp mind. Did you notice him keeping the books on Quarter Day, as the tenants make their payments to Jamie? And he knows the perfect message for Sunday’s sermon (even though he proclaims he’s not a preacher) – love thy neighbor as thyself.  And also scaring the wayward lads with teasing the story of Moses. Brilliant! 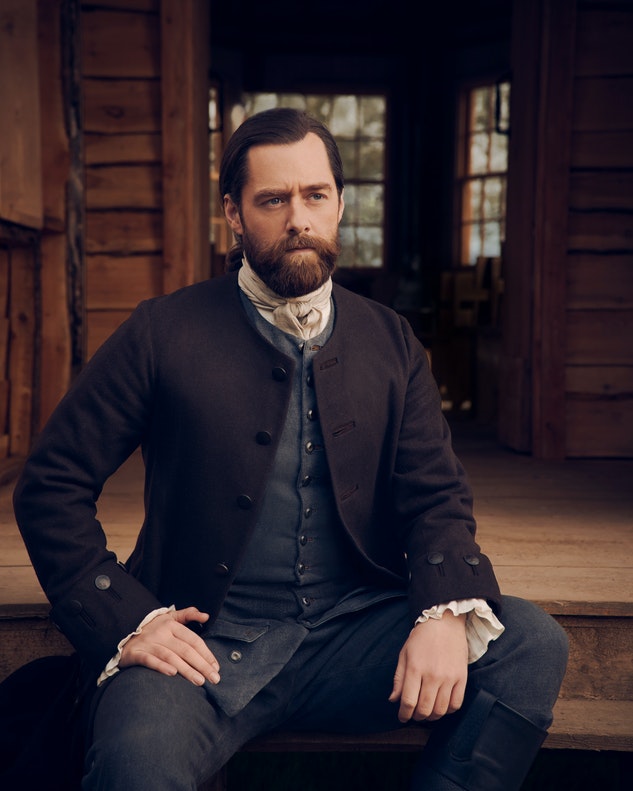 “Man of Worth” Ian, so named by his Uncle Jamie, may not know what he is (Christian, Catholic or other) or where his place is in the world, but Fraser’s Ridge is home for now. His courage is palpable at every moment of every day, literally written on his face with its Native American markings, and he is fiercely loyal to Jamie. 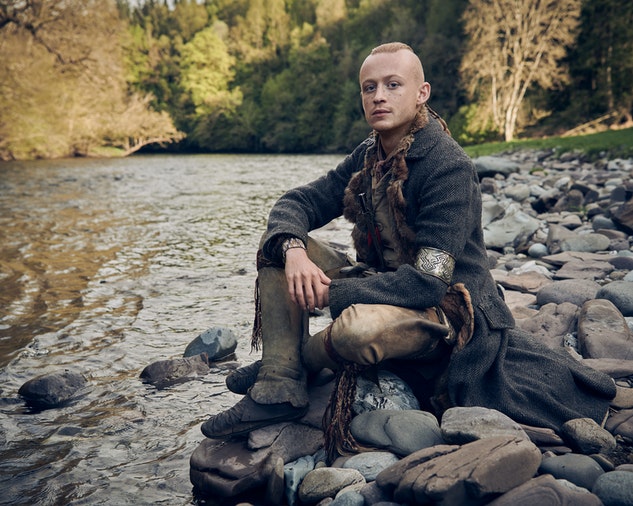 He may dress like the Mohawk he chose as family, but he is no less a gentleman. That walk with Malva, seeing her safely home, however, feels a wee bit dangerous. Heads up, Ian. There among the cattails, with her comments about his prowess as a hunter and her fingers grazing his cheek, her vibe ratchets from Wednesday Addams to Alex Forrest (Glenn Close) of Fatal Attraction. 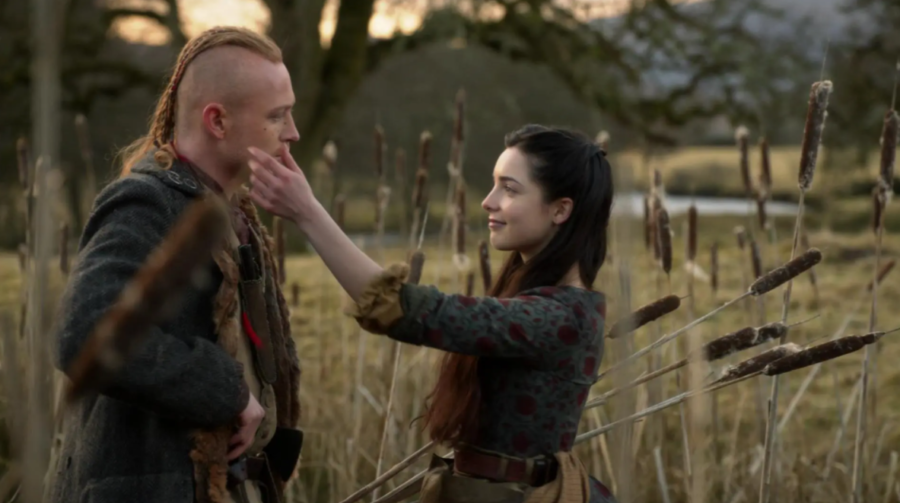 We know Ian’s heart is heavy with the knowledge of what’s ahead for not just the Mohawk, but for all Indigenous Peoples for whom a horrific and bloody road winds its way into an uncertain future. Certainly, as a Scot who saw his own people’s culture nearly eradicated, he can feel an even deeper kinship with those he already sees as friends and equals. He’ll need all his courage as he decides where his own future lies.

John Bell is perfectly cast as Ian, easily balancing on the knife’s edge of innocent charm and steely resolve.

Courageous ruler of the Ridge and former lass whisperer, Jamie has always seemed wise beyond his years. Just a quick skim of all those aliases and one can easily understand he has had a life that required ingenuity and resilience.

He’s always been loyal to his family, too, a trait prominent in Ms. Gabaldon’s books that we have always wanted to see more of in the TV series – Jamie as father, grandfather – and we were *ahem* rewarded in Temperance. 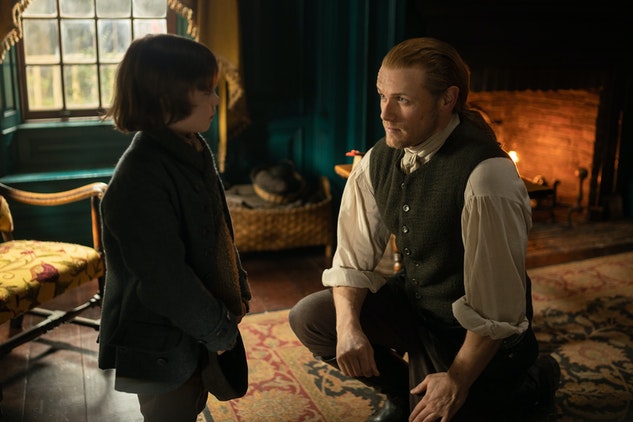 Jamie’s creative punishment for the wayward lads was a stroke of genius. The lads had been told by their misguided parents that they would be burned if they touched Henri-Christian so what did he do? Gave them the choice of touching the wee bairn or a red hot poker (One on One come to mind, anyone?).

Although its origin is disputed, I firmly believe in this tenet and have always associated it with Jamie: Luck is what happens when preparation meets opportunity. He’s almost always prepared and there seems to be boundless opportunity in his life. One such key moment was his fortuitous decision to go fishing – in his kilt, no less (I digress) – which leads him to chance upon Fergus at the critical moment, literally saving his life. Like any good Boy Scout, he was prepared and whipped off that neckerchief to use as a tourniquet until he could get Fergus to Claire. 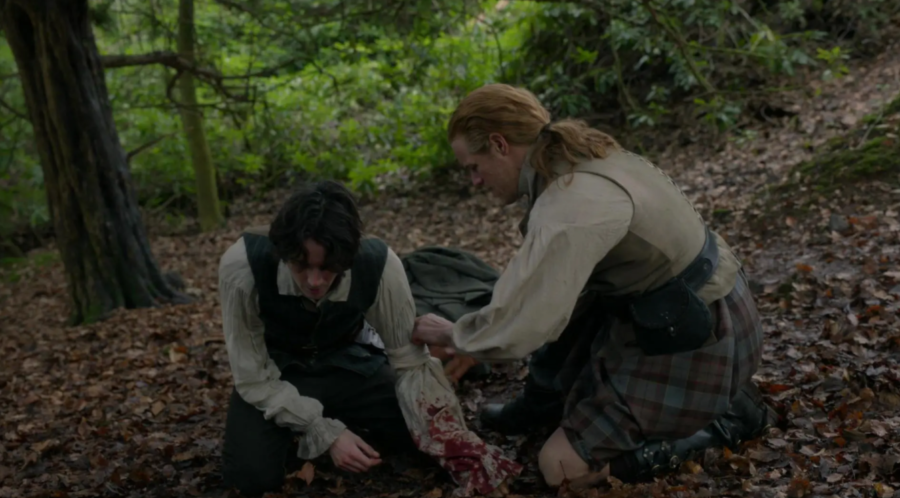 Oh, yes, the intimacy. Did you think I forgot? Jamie brought that, too. He told Claire bedtime stores of his time at Ardsmuir Prison– really forthright and illuminating – and his longing for sleep when he’d dream of her. I got the sense that special time followed as the Intimacy Advisor likely intended. I don’t need to see everything they do in the bedroom, but couldn’t they have made time to squeeze in a wee good night kiss at least? 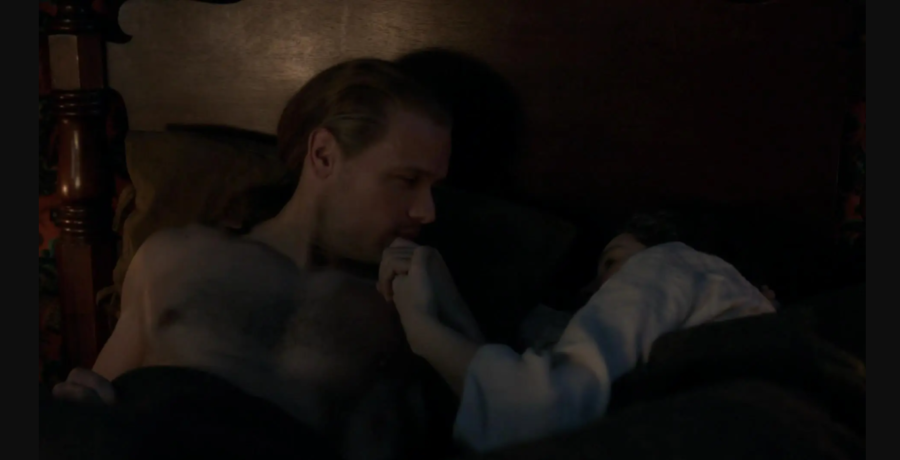 Lastly, as ruler of the Ridge, Jamie’s fierce loyalty extends to his tenants as well. That includes supporting his former Ardsmuir nemesis, Tom Christie (Mark Lewis Jones), as Claire operates on Tom’s hand. We love when Jamie leads with his heart and we’d follow him anywhere. 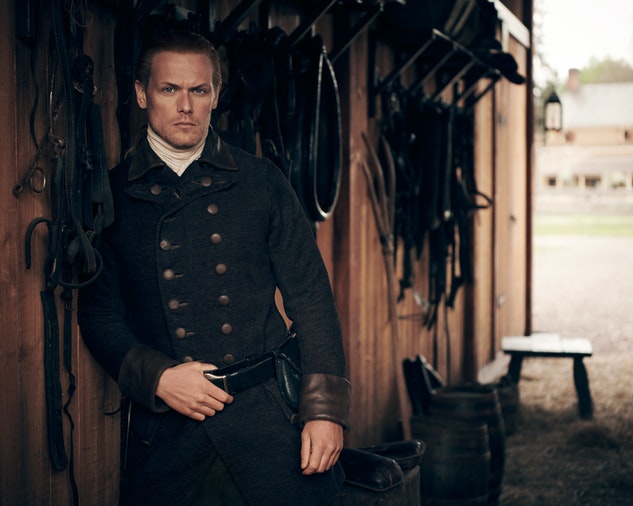 Sam Heughan is Jamie Fraser, we’ve been told by several of his co-stars. I was so glad to see him delve further into Jamie’s character. Maybe it’s a function of his Producer role but, no matter, we’re just glad to see him bringing us even more of Jamie.

I reluctantly give it up to Tom Christie for bearing the surgery sans anesthesia, relying only on his Bible verses. Kinda makes me want to vomit in that bucket, though. I’ll simply add, “Bite it, Tom, bite it.” *grin*

It was easy to see why Temperance made it on Diana’s favorite season 6 episodes list. We saw her creations – the braw men of Fraser’s Ridge – in all their glory. We love them, we give them our fealty and pledge them our loyalty in the name of the clan Fraser.

Anyone else craving a Murtagh moment right now? I know Diana says he should have stayed dead but I really miss that old coot!

Episode 604, Hour of the Wolf, is billed by STARZ as being focused on Ian. We don’t envy the choices looming before him that could affect his beloved Mohawk family.

What was your favorite Temperance moment?

Obsessenach Karen K. Rutledge found Outlander through the STARZ TV series in 2016 after living under a graduate school rock during Season 1 and most of 2. She binge watched first, then began making her way through Diana Gabaldon’s captivating book series. The rest is history.