For the Birds Part Deux: A Meadowlark and a Roller Pigeon

Those who know me well are aware that I am a huge nerd.  I see literary and film references everywhere, especially in places which seem entirely unrelated.  Rereading and rewatching Outlander has me seeing birds everywhere. Diana Gabaldon has turned me into a bird brain.  Thanks, girl!

In researching birds for my previous article, I found such rich meat to feast on that I had to cut out half of the references I had planned, including the one that initially struck me hard between the eyes as one of the most obvious external thematic references which, I’ll grant you, is most likely simply a beautiful bit of coincidence.

So naturally, this reference comes in the form of the only notable song from a failed Broadway musical by none other than Stephen Schwartz (of ‘Wicked’ fame). The song is called ‘The Meadowlark’ and is performed so often that on the strength of it, alone, Trevor Nunn spearheaded a drive to stage a London revival which, though a critical success, still managed to fail after only 56 performances.

The story takes place in provincial France.  The titular Baker, aptly named Amiable, and his much younger wife, Genevieve have a safe but uneventful marriage.  When courted by the much younger chauffeur, Dominique, Genevieve at first resists him, but, after reciting an allegory about a Meadowlark wooed by the God of the Sun, she decides to run away with him, to the despair and disbelief of Amiable.  Things turn sour and she returns to her husband, who refuses to admit she ever left him in the first place, insisting that she had only just returned from visiting her mother.  Instead, he unleashes his anger at the cat for “chasing after some Tom who looked good in the moonlight”, but in the end, he gives the animal a saucer of milk, demonstrating his forgiveness of Genevieve.

The problem with this is that no one ever runs away simply because a carrot is dangled in front of them. You don’t run to something unless you are running from something else.  Forgiveness is great, but nothing has been resolved.

For anyone familiar with the Outlander series, this should need no further exploration, but not everyone has seen the whole road-map and, while avoiding spoilers, lets just examine the lyrics of the song ‘The Meadowlark’, a song so apropos to Claire’s dilemma that, if Outlander were ever a musical (yes, I know one exists, but, much like Anne of Green Gables 3, I pretend it doesn’t) she could’ve sung it at the stones.

The Meadowlark
By Stephen Schwartz
When I was a girl I had a favorite story Of the meadowlark who lived where the rivers wind Her voice could match the angels in its glory But she was blind The lark was blind An old king came and took her to his palace Where the walls were burnished bronze and golden braid And he fed her fruit and nuts from an ivory chalice And he prayed: ‘Sing for me, my meadowlark Sing for me of the silver morning Set me free, my meadowlark And I’ll buy you a priceless jewel And cloth of brocade and crewel And I’ll love you for life if you will sing for me’ Then one day as the lark sang by the water The God of the Sun heard her in his flight And her singing moved him so he came and brought her the gift of sight He gave her sight And she opened her eyes to the shimmer and the splendor Of this beautiful young god so proud and strong And he called to the lark in a voice both rough and tender: ‘Come along! Fly with me my meadowlark Fly with me on the silver morning Past the sea where the dolphins bark We will dance on the coral beaches Make a feast of the plums and peaches Just as far as your vision reaches, fly with me’ But the meadowlark said ‘No’ For the old king loved her so She couldn’t bear to wound his pride So the Sun God flew away And when the king came down that day He found his meadowlark had died Every time I heard that part, I cried And now I stand here starry-eyed and stormy Oh, just when I thought my heart was finally numb A beautiful young man appears before me Singing ‘Come…oh, won’t you come?’ And what can I do if finally for the first time The one I’m burning for returns the glow If love has come at last it’s picked the worst time Still I know I’ve got to go Fly away, Meadowlark Fly away on the silver morning If I stay, I’ll grow to curse the dark So it’s off where the days won’t bind me I know I leave wounds behind me But I won’t let tomorrow find me back this way Before my past once again can blind me Fly away And we won’t wait to say goodbye My beautiful young man and I

For the purposes of this metaphor, Frank is the old king.  He clearly loves Claire, our meadowlark, but he doesn’t really understand what she needs.  He “rescues” her from her rootless life, only to put her in the gilded cage of “the Don’s wife”(thank you, Alastair Stephens).

She steps through the stones, meets ‘The God of the Sun’, Jamie, and her eyes are opened.  We even have this line from the book:

“Suddenly the inn door opened, and the sun came out, in the person of James.” – Outlander, Chapter 14 (A Marriage Takes Place), Diana Gabaldon

She is then finally given the choice . . . go back to Frank, safety, and her wedding vows or stay with Jamie in a dangerous past with an uncertain future, but with the chance to live passionately with someone who really understands who she is and what she needs. When she makes that choice at the stones, she does so with full knowledge of the wounds she is leaving behind.

For all of the dissenters out there, this is why we need Frank’s story. This is why the book was slightly the lesser for the lack of it. Yes, yes . . . we are firmly entrenched in Claire’s POV and this was not possible with the book’s narrative structure, but we aren’t bound by that structure in the show, so when we, along with Claire, are confronted with the choice, we do so with our eyes fully opened.  You may not like Frank, but I’m sure you respect Claire enough, as a character, to trust she would not have married a monster.  She married a man she loved, at least as well as she could with the knowledge she had of herself at the time.  There’s no real choice to be made if you can only clearly see one of the options.  You fully see both men and so you get to choose with Claire and, if the choice had been an easy one, it would not have made for compelling television.

There’s a wonderful passage in the book:

“‘I wish I could have fought him for you,’ he said abruptly, looking back at me.  His blue eyes were dark and earnest.
I smiled at him, touched.
‘It wasn’t your fight, it was mine.  But you won it anyway.’  I reached out a hand and he squeezed it.” – Outlander, Chapter 25 (Thou Shalt Not Suffer a Witch to Live) Diana Gabaldon

For those arguing that Frank’s story comes at the expense of Jamie’s, well . . . that’s a whole separate article, and it’s coming, I assure you, but in choosing to show Frank’s parallel timeline, the Outlander creative team has allowed us to actually see Jamie fight for Claire.

It’s enough, at this point, to know that she chooses to stay, because if she had gone back to the old king with her eyes fully opened, she would’ve seen her gilded caged and grown to curse the dark.  It’s a stunningly perfect allegory. 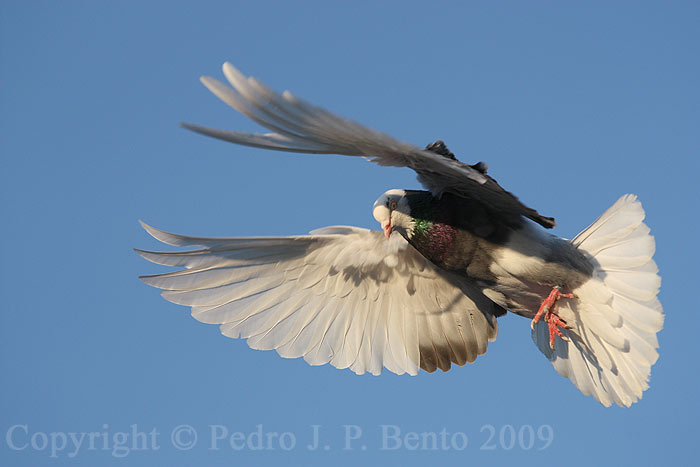 Source
The second external reference comes from another unlikely place and was actually, initially, a mistake.  The first time I watched ‘The Devil’s Mark’, I was so struck by the starling murmuration, that my brain flashed sideways to the film ‘Hannibal’, and I mentally linked Clarice Starling to the starlings in Outlander. In truth, the reference still works because Claire and Clarice are incredibly similar creatures, a supposition I’ll defend in just a moment.
First, though, I’ll give you the actual reference . . . of roller pigeons, not starlings:

“We were talking about inherited, hardwired behavior,” Barney, one of Lecter’s attendants at the Baltimore State Hospital for the Criminally Insane, tells Starling when she asks what Lecter thought of her. “He was using genetics in roller pigeons as an example. They go way up in the air and roll over and over backwards in a display, falling toward the ground. There are shallow rollers and deep rollers. You can’t breed two deep rollers or the offspring will roll all the way down, crash and die. What he said was: ‘Officer Starling is a deep roller, Barney. We’ll hope one of her parents was not.” – NYT pull-quote summarized from the novel, ‘Hannibal’ by Thomas Harris


Clearly, Claire is also a deep roller . . . and so, too, is Geillis Duncan, but what about the parallels?

For those not familiar with Clarice Starling’s backstory as detailed in ‘The Silence of the Lambs’, (get on that right away if you’re not!) Clarice was essentially orphaned at the age of 10.  Her father, a town Marshall, is killed in the line of duty and her mother can’t afford to take care of her, so she sends her to live with her uncle on a sheep and horse farm in Montana. Her uncle . . . who tends lambs. Are you starting to see the threads come together? She hears the spring lambs being slaughtered one night (the screaming of the lambs) and at first attempts to free them and, failing that, decides to run away.  Her uncle is furious with her when he finds her and sends her to live in an orphanage, where she spends her remaining years as a minor.  After graduating from the University of Virginia with degrees in psychology and criminology, she joins the FBI and becomes a successful field agent.

So . . . she is rootless and an orphan, like Claire.  She is also highly capable and used to being alone. Both Claire and Clarice had parents who died suddenly and eventually found themselves thriving in male-dominated professions.  They are strong, sharp, opinionated and brave and often plunge head-long into the fray without thinking of the consequences.  I think one of the reasons I love Claire so much as a character is that I first loved Clarice Starling.

Geillis Duncan, too, fits this profile.  The backstory we are privy too thus far paints her as a lone zealot, purposely traveling through the stones and through time on what is tantamount to a suicide mission, funding the treasonous Jacobite uprising in support of Charles Stuart, the pretender to the English throne.  She is obviously far more morally compromised (“Nice to meet you, Morally-Compromised”) than either Claire or Clarice, but she more than matches them in dogged determination.

So there you have it . . . two external sources which pretty perfectly dovetail (ha!) with Outlander’s themes.  And that’s it for my bird references, though book-readers will know there are a ton more throughout the series.

What are your favorites? Do you also annoy your friends with endless film analogies? Have you picked up on Outlander themes in strange places? Wanna yell at me for defending the Frank parallel timeline? Bring it! I’d love to hear your thoughts!