It’s been a few days since I finished “Savages” and my internal squealing has not stopped. I’ve been telling anyone who will listen that Murtagh is back, but my exclamations are mostly met with blank stares and indifferent shrugs (I’m looking at you, humans who live in my house). Murtagh is back, ya’l,l and I couldn’t possibly be happier about this huge diversion from the books!

It was the reunion that we all knew was coming but had no way to prepare for. Those of us who follow the Outlander gossip have been caught up in speculation for months. Would Murtagh be married to Jocasta? Would he replace John Quincy Myers? Would he be the one hanged in the opening episode? I certainly didn’t see this blacksmith gig on the horizon but it’s gotten me all sorts of giddy, so much so that I think this reunion might have been better than the one in the Print Shop.

I always feared the Print Shop reunion the way an adult fears a family trip to Disney World. You know your kids will smile and feel warm and fuzzy for a bit, but you also know that there’s the potential to have the magic sucked right out of your own moment when those kids have an unexpected meltdown, the Florida heat becomes unbearable, you refuse to stand in one more ride line or approximately 1.7 million other reasons. We had so many emotions pinned to that Jamie and Claire reunion that it was destined to fall a little bit flat. I felt so perplexed by it that I had to write a blog post (Jamie Fraser, The Print Shop, and Newton’s Third Law) to help me work through my emotions. Judging from the response, I wasn’t the only one who struggled, at least momentarily, with the scene.

This reunion was all the magic with none of the hype. If you watched Murtagh and Jamie and felt like the writers were evoking the Print Shop, you aren’t alone. Even Duncan Lacroix spoke about the comparison between the two. I loved every second of the Blacksmith Shop reunion and here’s why.

Book Readers and Show-Only Fans Were Equally Surprised
We all knew, based on the Season 3 book deviation that allowed Murtagh to survive Culloden, and some sneaky photos taken at filming locations, that Murtagh would return this season but all we could do is speculate on the when and how. None of us had a way to brace ourselves for what was coming because we didn’t actually know what was coming. And for once, book readers and show-only fans got to squeal in unison when we heard that voice and saw that face. Has there ever been such a moment of complete togetherness? Will there ever be a chance to repeat this feat? I think it’s doubtful and, for that reason, I am basking in the warm glow of this one. 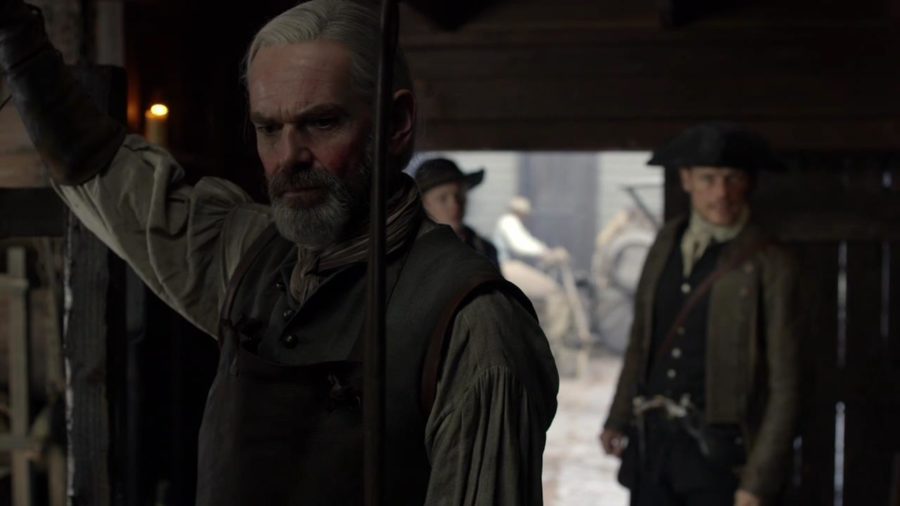 Tears and Smiles
When Claire stood in the Print Shop, she had a few moments to prepare for Jamie to turn around. She steeled herself against what she might see and what she might feel when gazing upon Jamie for the first time in 20 years. As viewers, we had an opportunity to do the same.

Savvy viewers knew the moment Ian began his negotiations that the stubborn blacksmith was Murtagh. In her episode recap, Ashley Crawley begged Murtagh to “turn around.” On a related note, screaming at the screen never works. It’s why I had to stop watching horror movies. As viewers, we weren’t sure what to do with our excitement. Would we be left waiting another few episodes before Jamie and Murtagh connected? Would they always narrowly miss each other?

We didn’t have to wonder long as Jamie stormed into the shop to take up his grievance with the blacksmith. When Murtagh finally turned around, we experienced the moment of reunion along with them. Neither had time to prepare. Neither wondered what they would say to the other. They just stood there lost in smiles and tears and all of our faces leaked together. Your face leaked too, right? 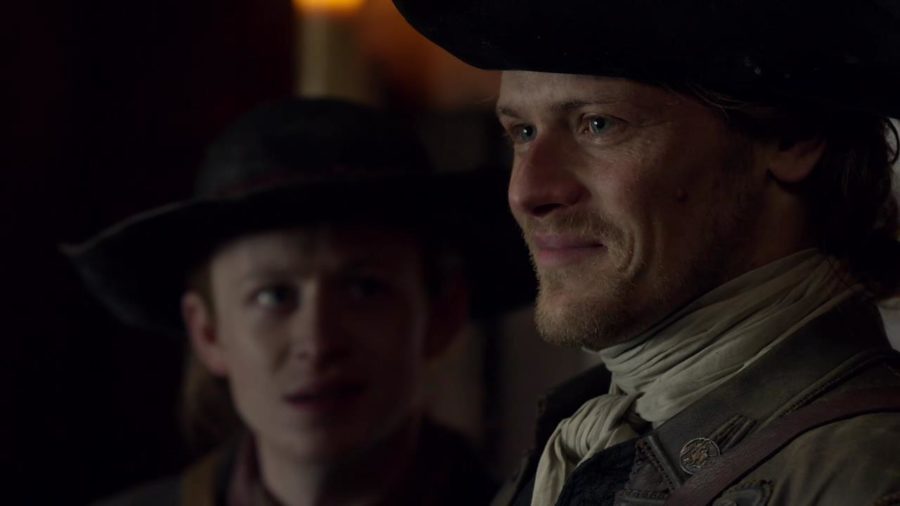 No One Fell “Thoroughly To Pieces” and I Don’t Even Care
Book readers will recall the line from the Print Shop scene in Voyager when Jamie viewed Brianna’s photos. Diana wrote that Jamie “buried his face in my shoulder and went very quietly and thoroughly to pieces.” In the show version of the Print Shop, readers waited for Jamie to go to pieces and, instead, he told Claire about Willie. While I, mostly, understand why the writers did this, it felt like a bit of a letdown for the book readers who wanted to see the rugged, middle-aged warrior weep uncontrollably at the site of his child.

Remember when I said that no one fell to pieces? What I really meant was that none of the characters on the screen fell to pieces. I, however, dissolved into a puddle of goo when Murtagh asked Jamie about “yer bairn” and Jamie told him about Brianna. Imagine Jamie’s complete relief at being able to speak of Claire’s return and his daughter with the only other person in the world who knew the entire story. For once, Jamie didn’t have to defend Claire against those who thought she abandoned him and he didn’t have to make excuses for Brianna’s absence. The pride on Jamie’s face as he told Murtagh that Brianna was a university student in 1971 reached all the way into the linen closet where I watch the show. Murtagh understood exactly how miraculous Claire’s return and Brianna’s modern life were and he shared Jamie’s joy like no one else could.

Joy, So Much Freaking Joy
Jamie and Claire’s reunion was joyous but, for book readers, that joy was tempered by the knowledge of so many terrible things that would come (the fire, Laoghaire, Ian’s kidnapping). It was all too easy to look beyond those first, tender embraces and fear the episodes that lay ahead.

With Jamie and Murtagh and then Claire and Murtagh, we were left only with joy. The smiles, the tears and all those hugs were enough to fill my Outlander heart to bursting. In a show where tragedy and happiness often walk the same path, one a few steps behind the other, it was a beautiful thing to watch these characters experience happiness without a threat looming just outside the frame. 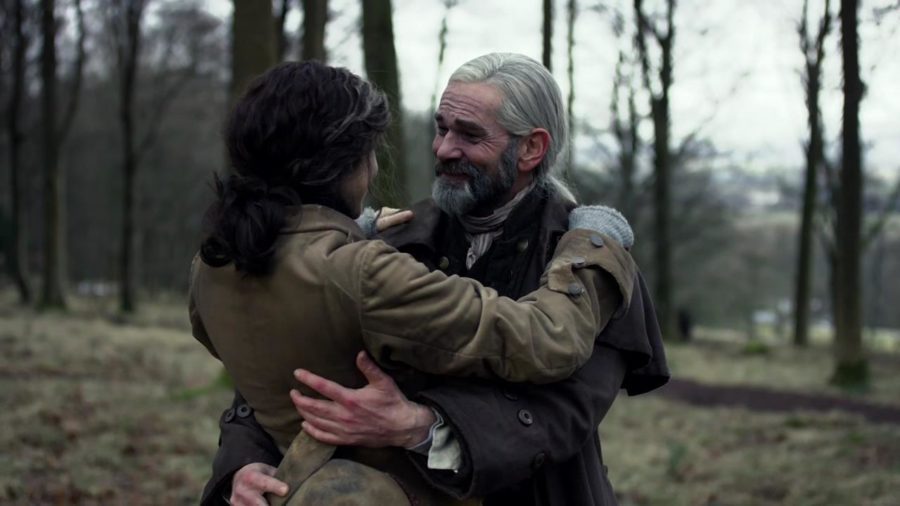 I recognize that all my giddiness is the result of the Outlander writing staff changing the course of Diana Gabaldon’s books in a major way. It was a risk on their part and I still don’t know how it will play out in the long run. For now, I want to offer a huge thanks to Bronwyn Garrity (the episode’s writer) and all the other amazing writers for bringing us this little slice of happiness in the midst of political and social upheaval and (spoiler alert) all the chaos to come.

We don’t know what will happen with Murtagh. If we let our minds wander a ahead a bit, we might assume that he and Jamie can’t come to terms with their opposing political views and go separate ways. We might also imagine that Murtagh gives up his political leadership in order to live, once again, alongside his godson. Any scenario we conjure is speculation at this point and I’ve decided not to give it much thought. Until the next episode airs (and in my mind), Jamie, Claire, Murtagh and Ian are frozen in time at that lovely little cabin on Fraser’s Ridge catching up on the past 20 years and existing as the most badass family this side of Cross Creek.

Did you like the Jamie/Murtagh reunion? What did you think of the deviation from the book?

Nikki joined Outlander Cast as a writer in 2016 when she realized that her friends would no longer tolerate her constant talk of Outlander. Each time you read one of her blog posts, you are working to save those friendships. Both Nikki and her friends thank you. If you would like to read more of Nikki’s mostly nonsensical and occasionally heartwarming writings, you can visit her personal blog at sassynik.com. If you’d like to see photos of beer and wine, sunsets, and cozy things, you should follow Nikki’s Instagram account. You can find her at @nikkigastineau on both Instagram and Twitter.