How They Made It: Egg Custard with the Duke of Sandringham

Welcome back to our occasional series, “How They Made It,” where we explore the food and drink of Outlander. Here’s a look at the Duke of Sandringham’s egg custard. Slainté!

Dining with the Duke

Ah, the Duke of Sandringham… isn’t he a deliciously slimy villain, especially as played by Simon Callow? He’s soft and slippery, yet full of strong opinions. I’d like to think that he dines on the finest food he can muster, even when surrounded by soldiers encamped on the grounds of Belmont House with Claire, Mary, and that vile valet, Danton, in Season 2. Roast meats, jellies, puddings and custards would all grace his table – surely the quintessentially English egg custard would also make an appearance there. Simple and comforting, egg custard is as at home on the Duke of Sandringham’s table as it is on yours. 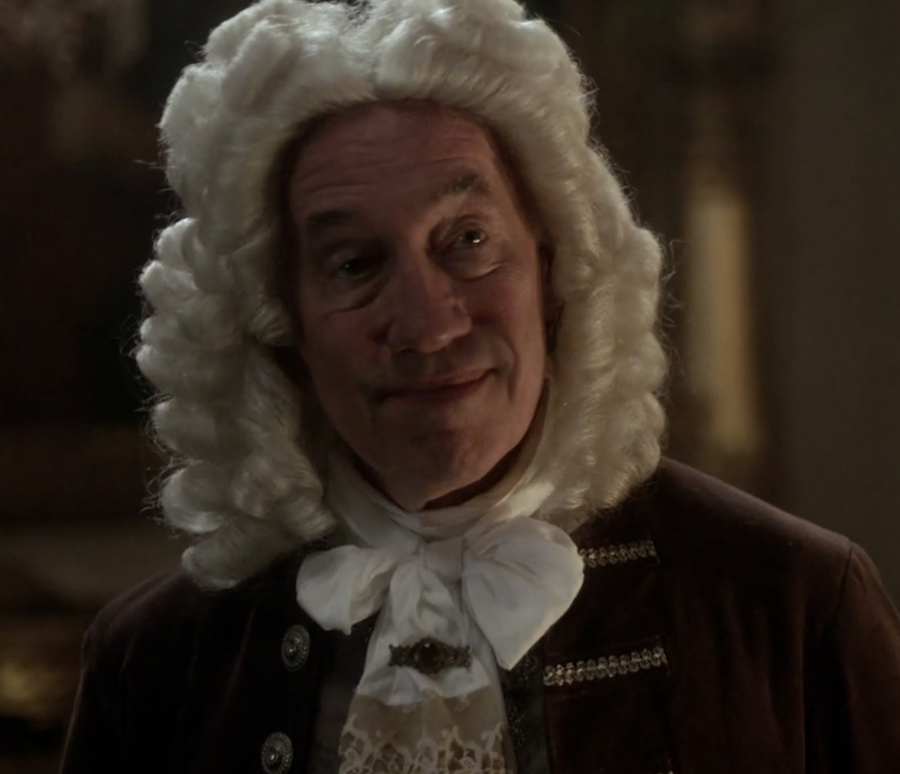 At King Louis XIV’s court, the Duke of Sandringham was all courteous and oily… (photo credits: Outlander STARZ) 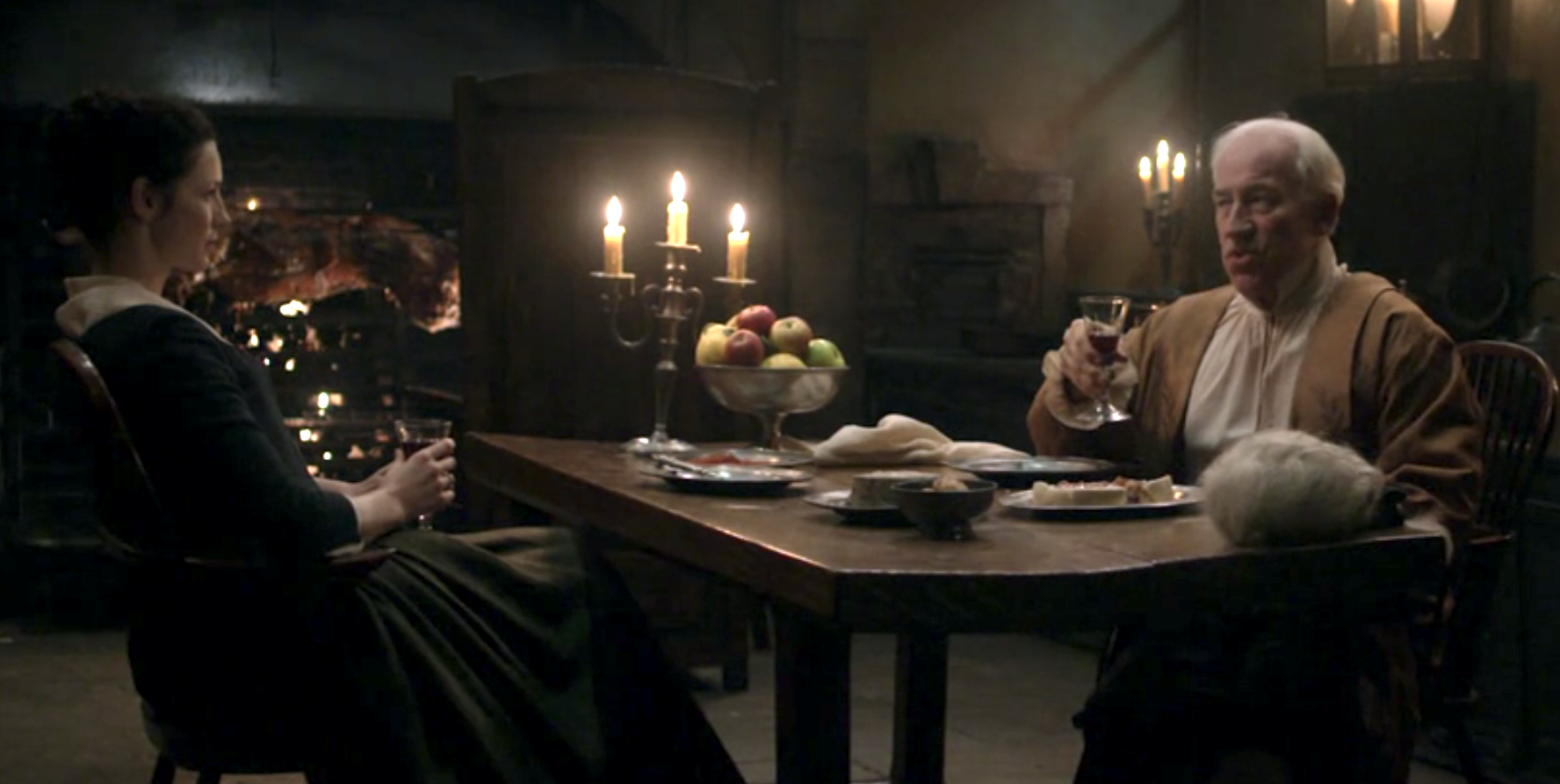 …and at Belmont House, he shared a meal and his evil plans with Claire  (photo credits: Outlander STARZ)

Egg custards have been eaten in England for centuries; they can be savory for dinner (think: quiche), or sweet for dessert. Some custards were loose, poured as sauces, but others were set and baked either in pie crusts or tarts, and later, served in small dishes called ramekins. According to British Food: A History, “(B)y the seventeenth century onward, set custards had become popular because they were actually more difficult to make than the saucy ones.” Custards were usually baked in a shortcrust tart shell because the crust protected the egg custard from being overcooked. A water bath could effectively insulate the custard as it was baked, however, “…it was rather problematic to effectively use water baths, and was difficult to check the ‘doneness’ of the custards with the old open fires. As ovens became more refined, this sort of delicate baking was easier to attain.” Puddings outside of tart shells became popular, like burnt cream (crème brûlée), and a simple ramekin of fine egg custard was born. 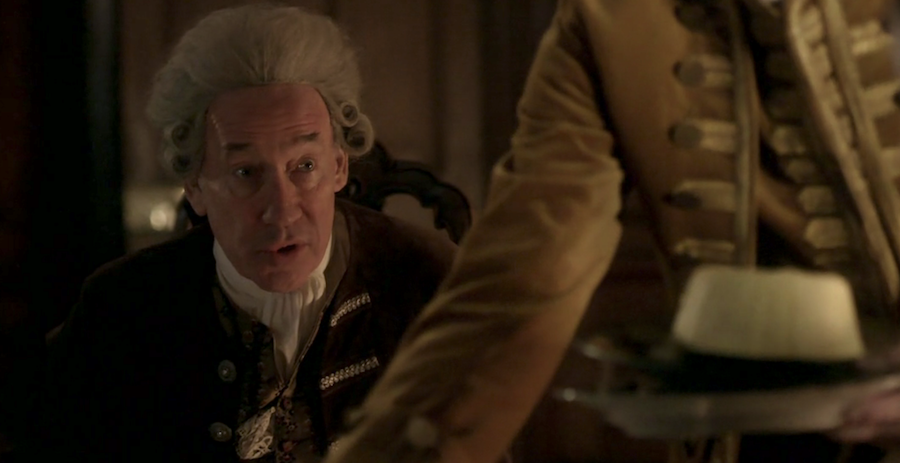 See, here’s a set custard (although we don’t know if that was sweet or savory) (photo credits: Outlander STARZ) 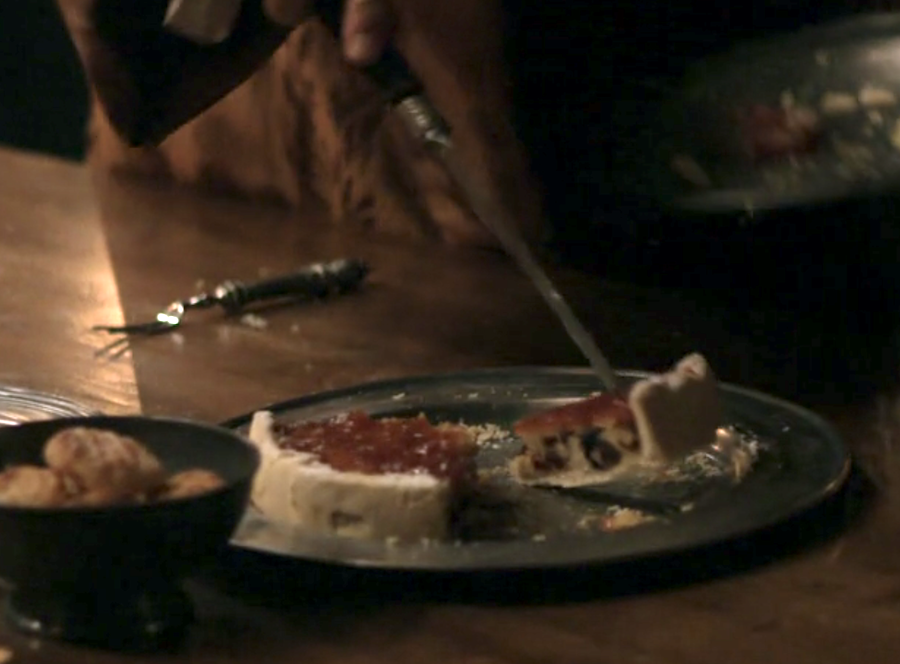 The Duke served Mary some quiche before ordering her to bed (photo credits: Outlander STARZ)

Egg custard is a variation on cream custard (essentially, vanilla sauce) and a cousin to the pastry cream that filled Briana’s Boston Cream Pie. It’s the same base of eggs, sugar, and cream – just baked in a water bath to set rather than thickened on the stove with cornstarch. The texture of egg custard comes out silkier than pastry cream because it doesn’t have to stand up to the weight of a cake.

I had some egg yolks left over after making Flourless Chocolate Walnut Cookies, didn’t have enough lemons to make lemon curd and wanted something easy and comforting for dessert. Enter in egg custard – delicately flavored with vanilla and nutmeg, it’s a treat of sublime simplicity that also seems fancy to me. I found a recipe for Egg Custard Tarts on BBC.com, but I didn’t want to make a shortcrust. Then I came across Vanilla Bean Custard from Martha Stewart, and I was all set to go…just mix, bake, and eat (well, chill first…the hardest part is waiting!).

One point to highlight – preparing a water bath can be intimidating if done with hot water and filled ramekins, so here’s a tip: pour a proper amount of cold water (enough to go halfway up the sides of the ramekins) into an appropriately sized pan (big enough to hold them all without crowding) with the ramekins unfilled, then remove the ramekins and put said pan in a preheated oven. The water will warm up and be ready when you have filled the ramekins with the egg custard base. The benefits of this method: no risk of splashing the egg custard as you measure in the water, and no boiling water to spill when you put the pan in the oven. Score times two! 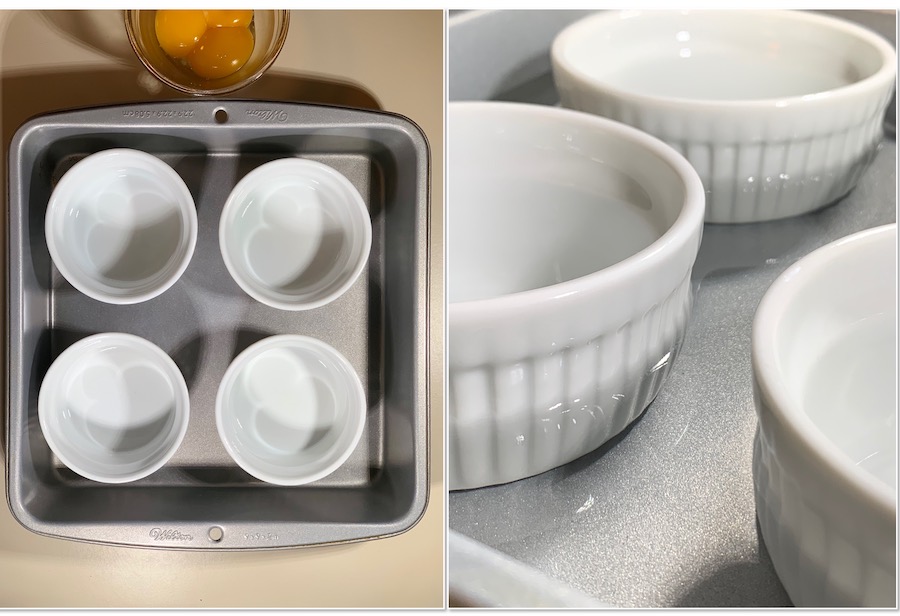 One other point…the flavor of the vanilla will be highlighted in this dessert, so be sure to use a good quality vanilla extract if you don’t plan to use a vanilla bean. It’s worth the effort in the end. You’re welcome. 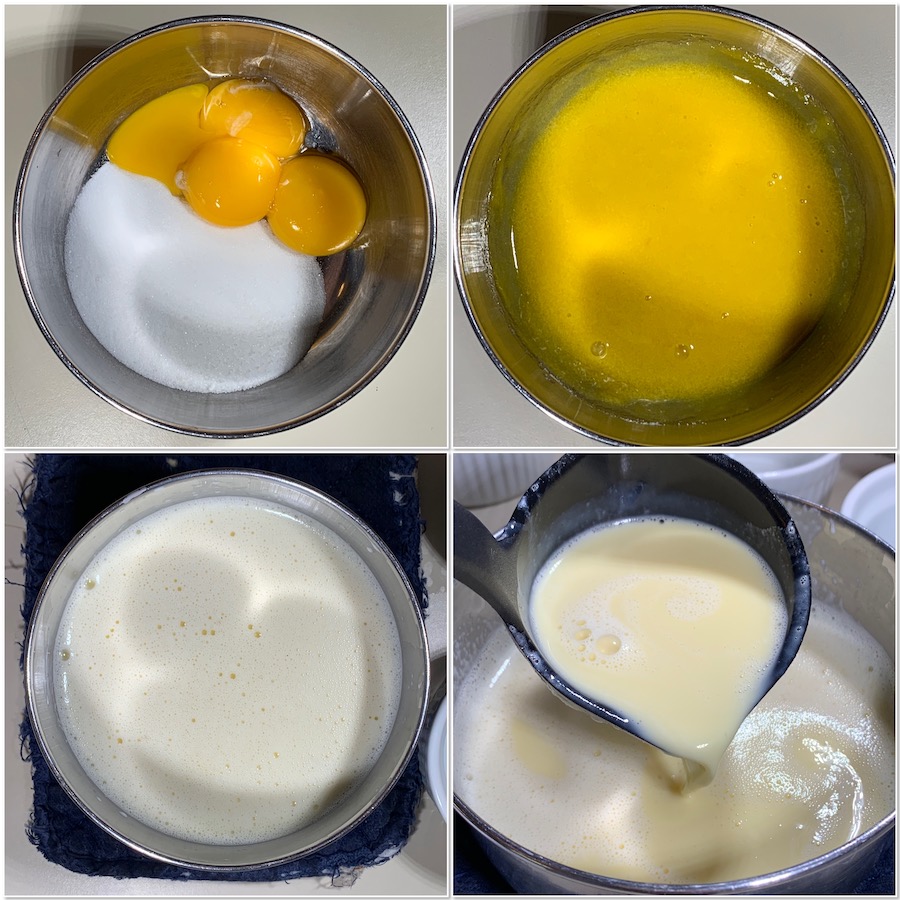 Making the egg custard base is just mixing egg yolks with sugar, then SLOWLY adding in hot milk 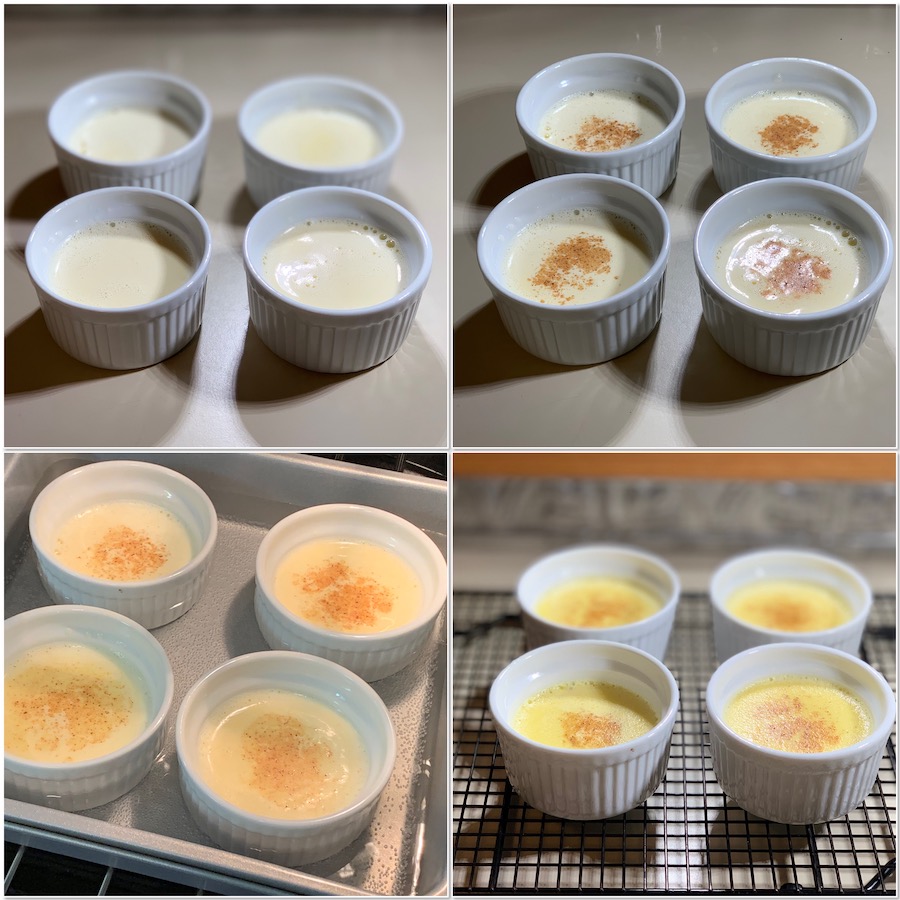 Egg custard, before and after a trip to the oven 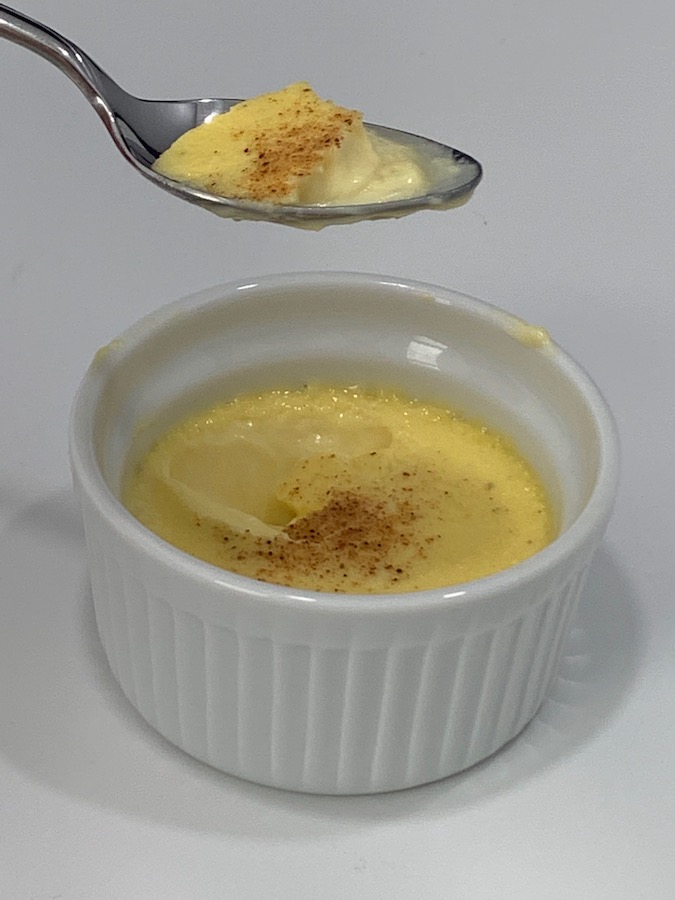 This egg custard is silky smooth, with a creamy, soft consistency. There’s rich flavor from the eggs (not “eggy” in the least), and a delicate vanilla flavor with a slight spiciness from the nutmeg. It’s not overly sweet as vanilla pudding can be, and like a soft créme brûlée without the crunchy burnt sugar topping (although, I’m not opposed to adding that topping…I’d get to play with my torch!). Egg custard, soft in consistency yet strong in flavor (much like the Duke of Sandringham himself), belongs on my dinner table and yours! 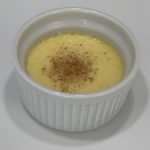 This recipe doubles well. Just be sure to have a large enough pan to hold all the ramekins without crowding them. If you want to use a vanilla bean instead of using vanilla extract, simmer the scraped seeds and beans with the cream and milk. Remove the bean before tempering the cream into the egg mixture. Did you make this recipe? Please share your pictures with the world on your social media…tag @outlandercast (on Instagram and Twitter) and use the hashtag #howtheymadeitoutlander. I can’t wait to see your creations!