In celebration of Outlander‘s five-year television anniversary, we’re revisiting “Sassenach” – the episode that started it all.

Looking back on Outlander Season 1 is always fun, no? Back to where it all began. From what I can gather, my experience is similar to very many other fans. We started Season 1 on the recommendation of a friend as Outlander innocents. But we were soon swept into a maelstrom of fan frenzy, and we were hooked. Like me, many of you delved straight into the books. I just plowed on relentlessly until I finished every one of them and then sat around waiting for Season 2 to appear.

I later learned this waiting game was called “Droughtlander” and, boy, did I feel it. I connected strongly with all platforms on social media and just drank it in. Sound familiar? That’s what led me here, to the Outlander Cast Clan Gathering. If you’re new here, welcome, and I’m sure you will enjoy the experience and the fan camaraderie.

In celebration of the five-year anniversary of Outlander’s premiere on Starz, and as we await Season 5, the television adaptation of The Fiery Cross, I thought it would be timely to take a fond look back at the very first episode, “Sassenach,” and to touch a little on Diana Gabaldon’s first book, simply titled Outlander – the story that started it all. Much is often made of the differences between the show and the books and, even those who complain loudly at times (I’ll put my hand up here as an occasional complainer!), must concede that the show is an adaptation and, by nature, must be a condensed interpretation of the books.

Having said that, there are so very many similarities, and many exact renditions of the book content in the show. For me, I love to revisit the audio books narrated by Davina Porter. I find her ability to perform the different voices for each character, and to maintain them throughout all the books, is simply amazing. The audio books are like old friends while driving or out walking, and there’s always something new to pick up. The life of the Frasers and their entourage is endlessly rich and fascinating. If you would like to learn more about Davina Porter, my colleague Janet Reynolds interviewed her a while back for this post, “A Talk with the Voice of Outlander.”

So, what were the most exciting and meaningful elements of  that first episode? In show-writing and production parlance they refer to ‘beats’  – crucial elements of the story that have special prominence and meaning, and are surrounded by supporting action. How about first up, the innocence of Frank and Claire trying to regain their pre-war life. I actually remember feeling a little bit impatient the very first time I watched “Sassenach.” I knew it was a time travel story and I was keen for the action! On subsequent viewings, I was more patient and enjoyed the background to the story of Frank and Claire and their ‘second honeymoon’ in the Scottish Highlands. Here’s a deleted scene from Season 1 showing the tension between them, but also the commitment to each other, as well as pictures of them with contented expressions. Little did they know what was lurking just around the corner. 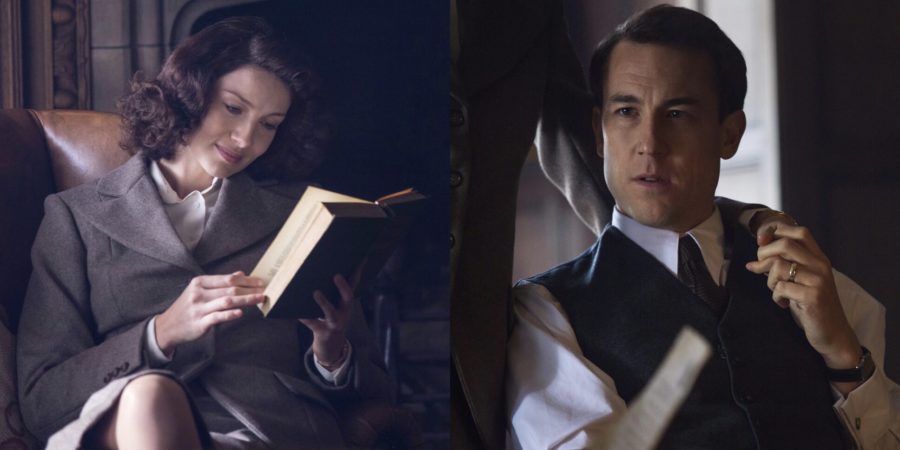 Claire meets Mrs. Graham early in the episode. Her fortune telling is ominous and does have an unsettling effect on Claire. Claire’s relationship with Mrs. Graham becomes important, especially when Claire realises that she is a ‘caller’ at the stone circle. In later seasons, Mrs. Graham provides comfort and solace to Claire in her darkest moments, as the only person who can understand and validate her traumatic experiences. And later still, Mrs. Graham’s granddaughter, Fiona, carries on the family tradition of helping the Randalls, Frasers and MacKenzies with the travails of time travel!

Frank meets the ghost of Jamie Fraser – Jesus H Roosevelt Christ! What an enigmatic and iconic scene, which subsequently leads to more anguish and tension between Claire and Frank. We are all waiting with baited breath for Diana Gabaldon to reveal to us the meaning of this scene. We could be waiting a while, but patience is a virtue, right?

When Claire goes through the stones, she first endures a torturing physical experience, followed by emotional torment and complete disorientation. We learn right from the start that Claire is feisty and resourceful, not prone to giving in to fear, able to adapt quickly to changing circumstances, to think on her feet, and to not panic. Have you ever imagined what you would do in her shoes on that fateful day at Craigh Na Dun?

Here is a sample of the audio narration from Davina Porter, and one of the examples of where the show runs pretty much exactly parallel with the book.

Claire meets Black Jack Randall (BJR) for the first time, very soon after travelling back in time. Claire has a lot of ambivalence toward BJR as he reminds her so much of Frank physically, and she still has it in mind to get back to Frank. This is spelled out much more clearly in the book and is a source of distress to Claire that she sees so many echoes of her husband in this man. Two scenes here, first, the way the show handles their meeting, showing Claires confusion at meeting this Frank look-alike.

And then the book narration by Davina Porter which shows the detail with which Claire takes in the man and begins to understand who he really is, and to have her first inklings that her world has turned upside down.

Claire meets Murtagh – Claire’s first meeting with Murtagh is frightening and violent but, as we know, he becomes an important person in her life. Things are quite different in the books, where Murtagh is always there for Jamie, but does not become close with Claire. The show writers changed that situation dramatically from the moment Claire and Jamie decided to let Murtagh in on Claire’s ‘secret’. They also used the Murtagh character as a dramatic device for exposition. After all, its way more interesting for the audience to have the story unfold through action between characters than through endless voice-overs of the characters thoughts. That, coupled with the fact that the fans adored Duncan Lacroix and his portrayal of Murtagh, became the winning formula.

Side note: my Outlander Cast colleagues have written some interesting posts on the later development of Murtagh, which you might like to explore. To go full Murtagh, be sure to read Anne Gavin’s “Outlander’s Murtagh Lives. What’s next for this iconic character?” and Nikki Gastineau’s “Move Over Print Shop. Why Outlander’s Murtagh Reunion Wins.”

After being rescued by Murtagh, Claire is taken to meet Dougal, Rupert and Angus. This is one of those scenes where we can only admire Claire’s ability to keep a cool head. Faced with overwhelming events, she manages to stay calm and reasonably clear-headed. Even when it is suggested that they could ‘put her to the test’! Of course, Claire and Dougal go on to have a rich and multi-faceted relationship, one that is filled with tension, intrigue and hostility.

Claire meets Jamie – of course this is a HUGE plot point/beat, yet the first time I saw the series I had no idea that Jamie and Claire would come to mean the world to each other. I just saw the whole thing unfolding, but on second and subsequent (who’s counting? Maybe I lost count!) viewings, we can see the seeds of their attraction. The looks and little electric touches which start to portend the future. 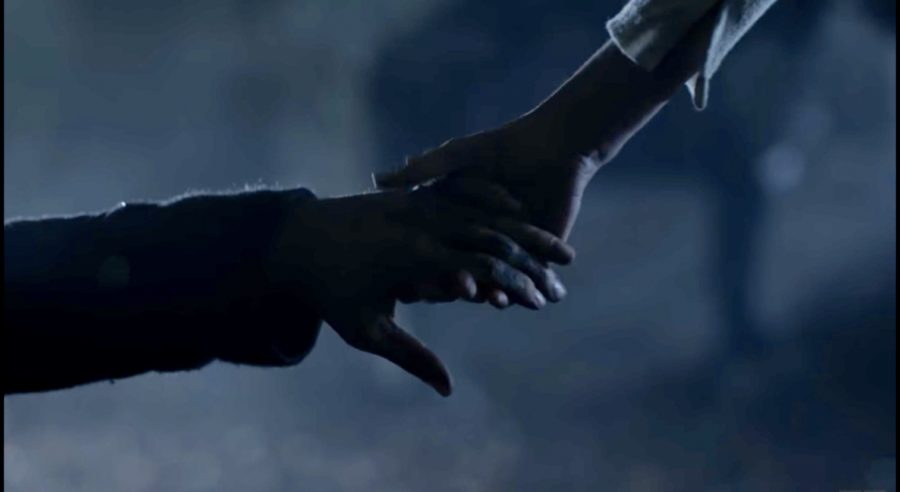 There are four important elements of Claire’s first meeting with Jamie: she shows her skills and wins his respect and admiration; she warns him of danger and wins his trust; she tries to escape and lets him know she’s feisty and not to be pushed around; and finally, she relaxes – possibly out of exhaustion – begins to trust Jamie and becomes resigned to dealing with whatever will happen next. 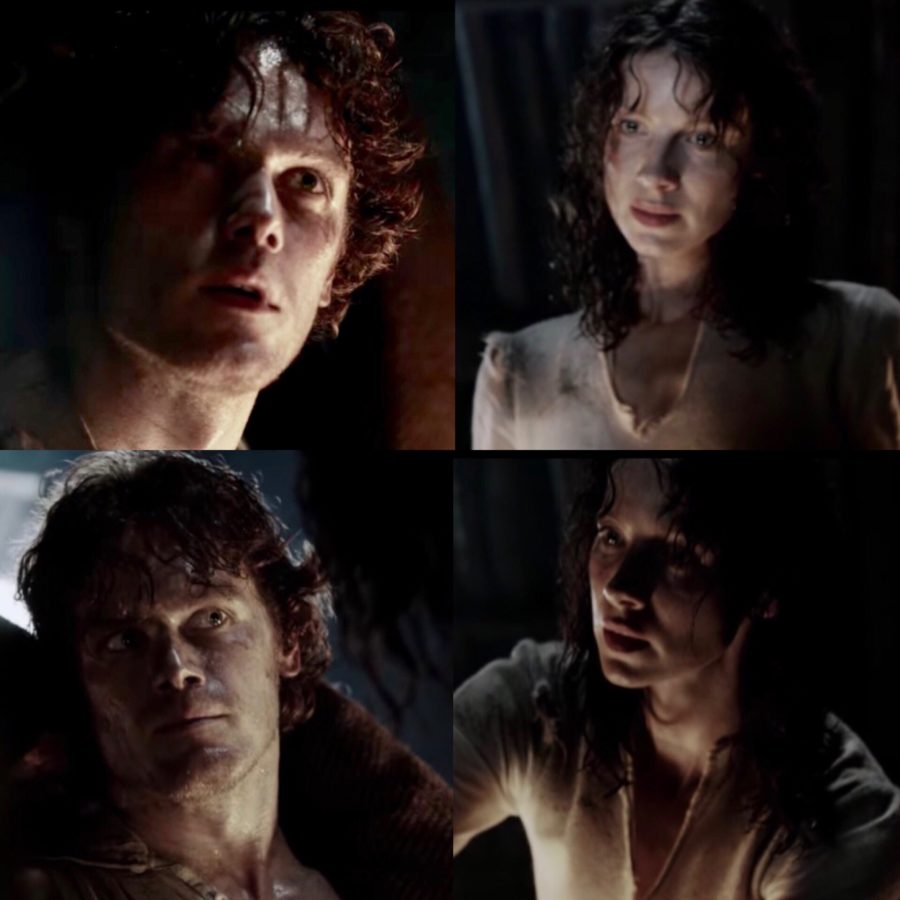 Jamie immediately has respect and admiration for Claire’s healing skills 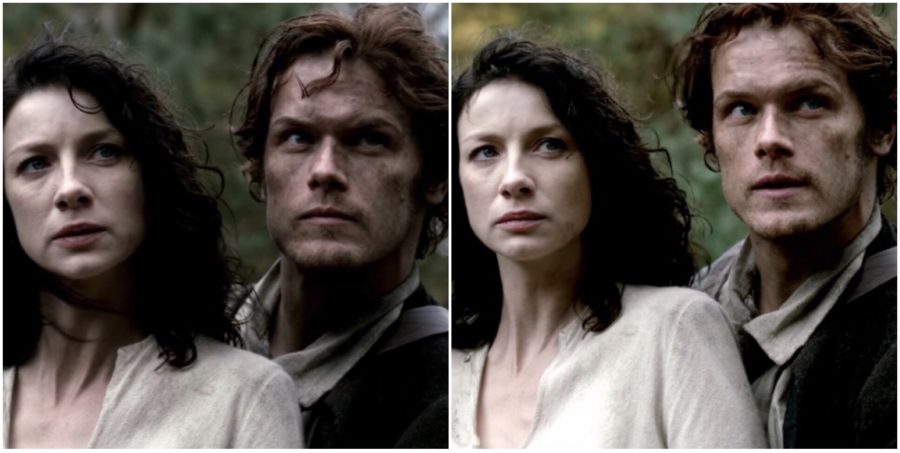 Claire lets Jamie know that she is not the meek and obedient type – right from the start!

Another iconic scene where Claire saves the day and treats Jamies gunshot wound. Her mastery, skill and no-nonsense approach both shocks and impresses everyone!

At the end of “Sassenach,” we see Claire near exhaustion, with a level of trust in Jamie,  and resigning herself to meet the challenges of her journey.

So, this is the episode of Outlander that hooked us all five years ago, and so it continues. If you are new to Outlander, enjoy the ride. If you’re a seasoned campaigner, hope you enjoyed looking back and reliving the magic of how it all began. I’d love to hear about your first time watching “Sassenach,” so please feel free to leave a comment below.

Please note: All video excerpts highlighted are courtesy of Starz.