How They Made It: Claire’s Old-Fashioned Homemade Peanut Butter

Welcome back to our occasional series, “How They Made It,” where we explore the food and drink of Outlander. This time we’re recreating Claire’s homemade peanut butter for journey cakes. Slainté!

What snacks do you pack for a road trip?

Do you take candy and chips (or crisps in the UK)? Something healthy, like fruit and granola bars? If it’s a long trip, sandwiches for a roadside picnic?

Whatever it is, it’s food for a journey.

A quick Google search told me that journey cakes (or johnnycakes) are a cornbread flatbread (like a corn pancake) that originated from the indigenous people of North America. Their purpose is clear: a food that’s portable and won’t spoil quickly.

We know that Claire (and later, Brianna) had peanut butter & jelly sandwiches (or PB&J) for their trip through the stones. Easy to store and would keep for a while, those journey cakes were a smart choice. And those sandwiches were a reminder of home.

It was for that bit of nostalgia that Claire decided to recreate peanut butter & jelly sandwiches for her family in Episode 5.11, “Journeycake.” Before she knew that the MacKenzies were able to travel back through the stones, Claire wanted Jemmy to have a taste of the comfort food she had known in the 20th century. How would Claire have gone about bringing PB&J to the 18th century?

But first, some background (you didn’t think I would skip the history, did you?). 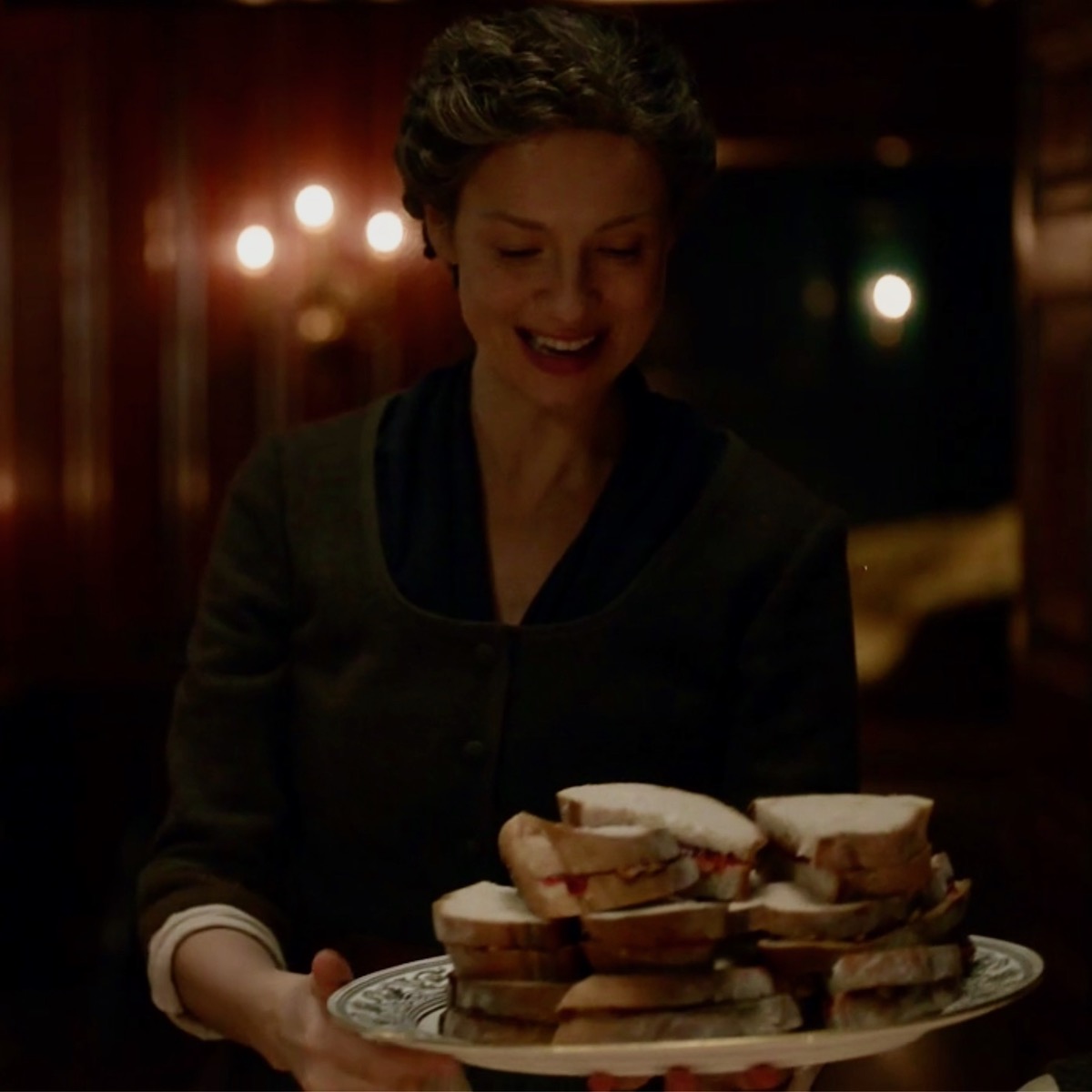 Peanuts have been eaten for a long time. A very long time.

Originating in South America, there is evidence that “as early as 1500 B.C., the Incans of Peru used peanuts as sacrificial offerings and entombed them with their mummies to aid in the spirit life. Tribes in central Brazil also ground peanuts with maize to make a drink,”according to the National Peanut Board.

Spanish explorers brought peanuts to Spain, and from there it spread to Asia and Africa. It was Africans who introduced peanuts to North America in the 1700s (you can guess as to how and why they were there).

Peanuts are a tough crop to grow, and it wasn’t until the early 1800s that they were grown commercially in the US, and were used “mainly for oil, food and as a cocoa substitute. At this time, peanuts were regarded as a food for livestock and the poor.”

That explains Jamie’s comments about feeding Claire’s peanuts to the pigs.

It was Marcellus Edson of Canada who held the first US patent “representing the finished product created from milling roasted peanuts until they reached a fluid state” in 1884 (Culinary Schools.org), but Dr. John Kellogg (yes, of cereal fame) is credited for actually creating the process for making peanut butter in 1897. And Dr. George Washington Carver discovered over 300 uses for peanuts (including peanut butter) in the early 1900s.

The National Peanut Board tells us that “peanuts and peanut butter became an integral part of the Armed Forces rations in World Wars I and II. It is believed that the U.S. army popularized the peanut butter and jelly sandwich for sustenance during maneuvers in World War II.”

So we have the army to thank for American’s love of PB & J sandwiches. 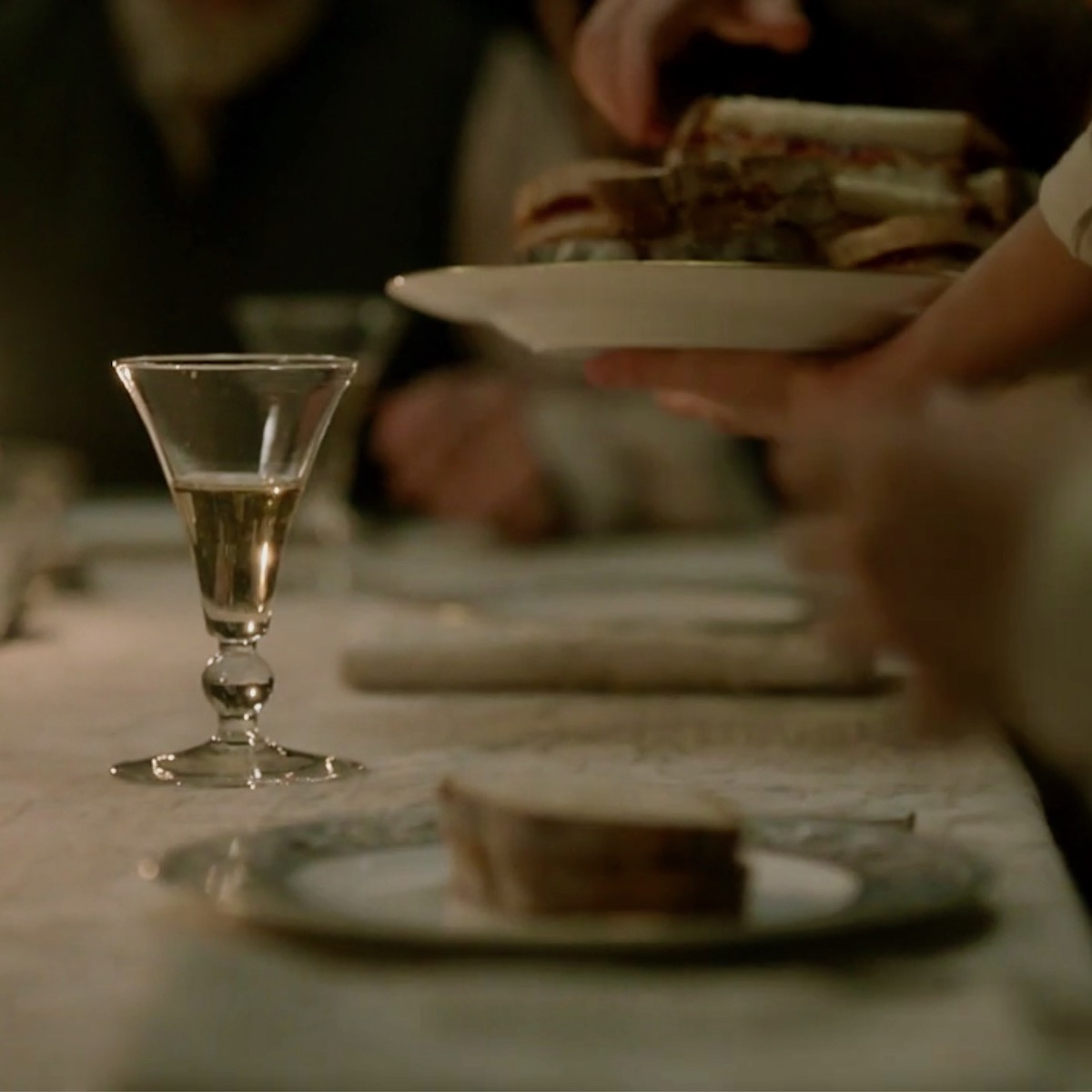 The beauty of the homemade peanut butter recipe Claire would have followed is its simplicity: take shelled and roasted peanuts and grind them up into a paste. That, in a nutshell, is it. (you had to go there?!)

Ok, she might have added a little salt and/or a little sweetener (like that honey Jamie and Briana brought home in Episode 4.09), but you get the idea.

Note, homemade peanut butter won’t be as smooth as commercial peanut butter, but it’s spreadable and yummy. Just think of all the preservatives, emulsifiers and additives you’re not using! 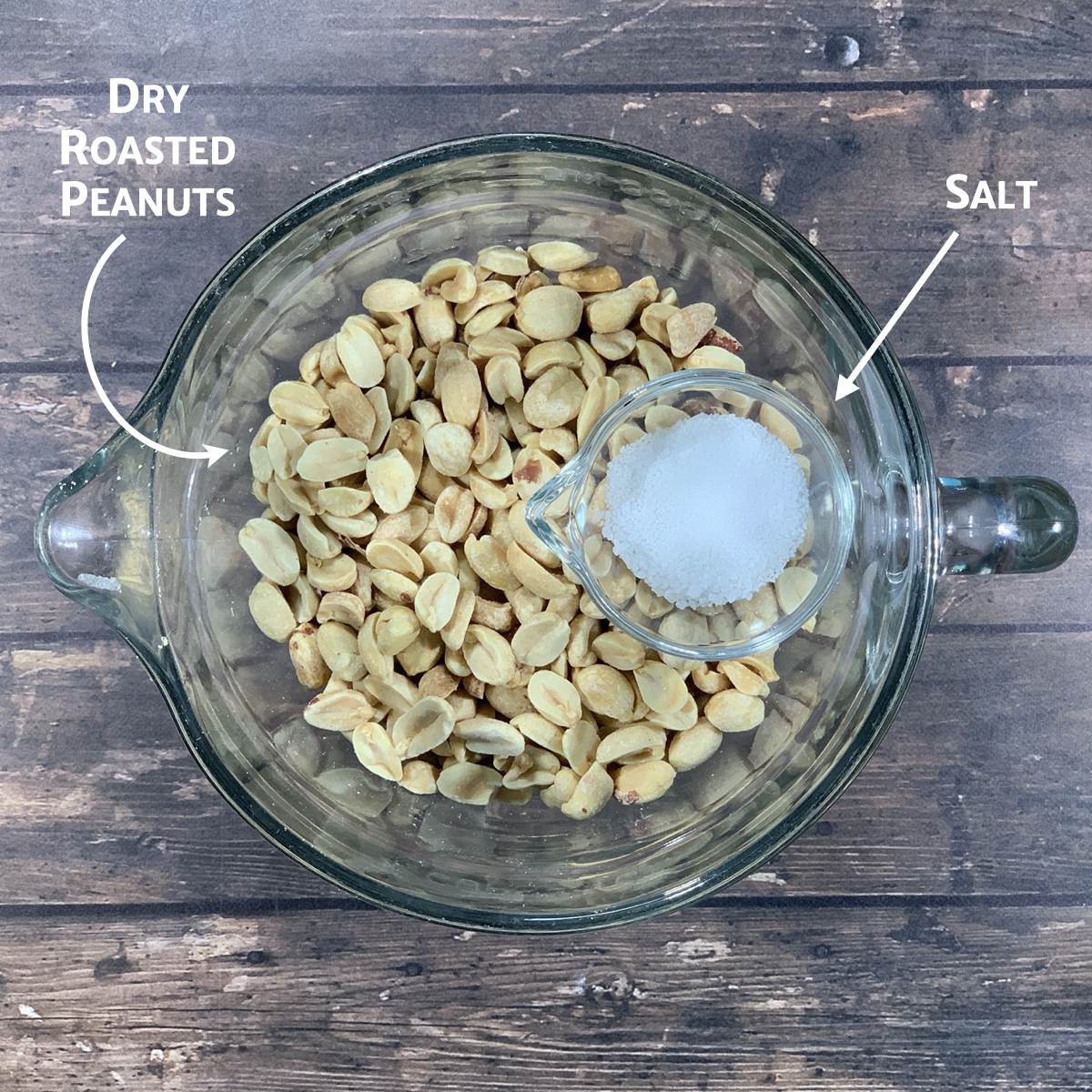 Homemade Old-Fashioned Peanut Butter is just peanuts and salt. How simple is that?

Score one for modern appliances

Now pounding peanuts into paste would be the only method available to Claire (and hard to say three times fast!).

Luckily we have electricity. And with it, a food processor.

So for us, making peanut butter takes about five minutes, 10 if you count warming the already dry-roasted peanuts available in most supermarkets. Okay, 15 minutes if you’re roasting your peanuts from raw, but let’s not get carried away here. 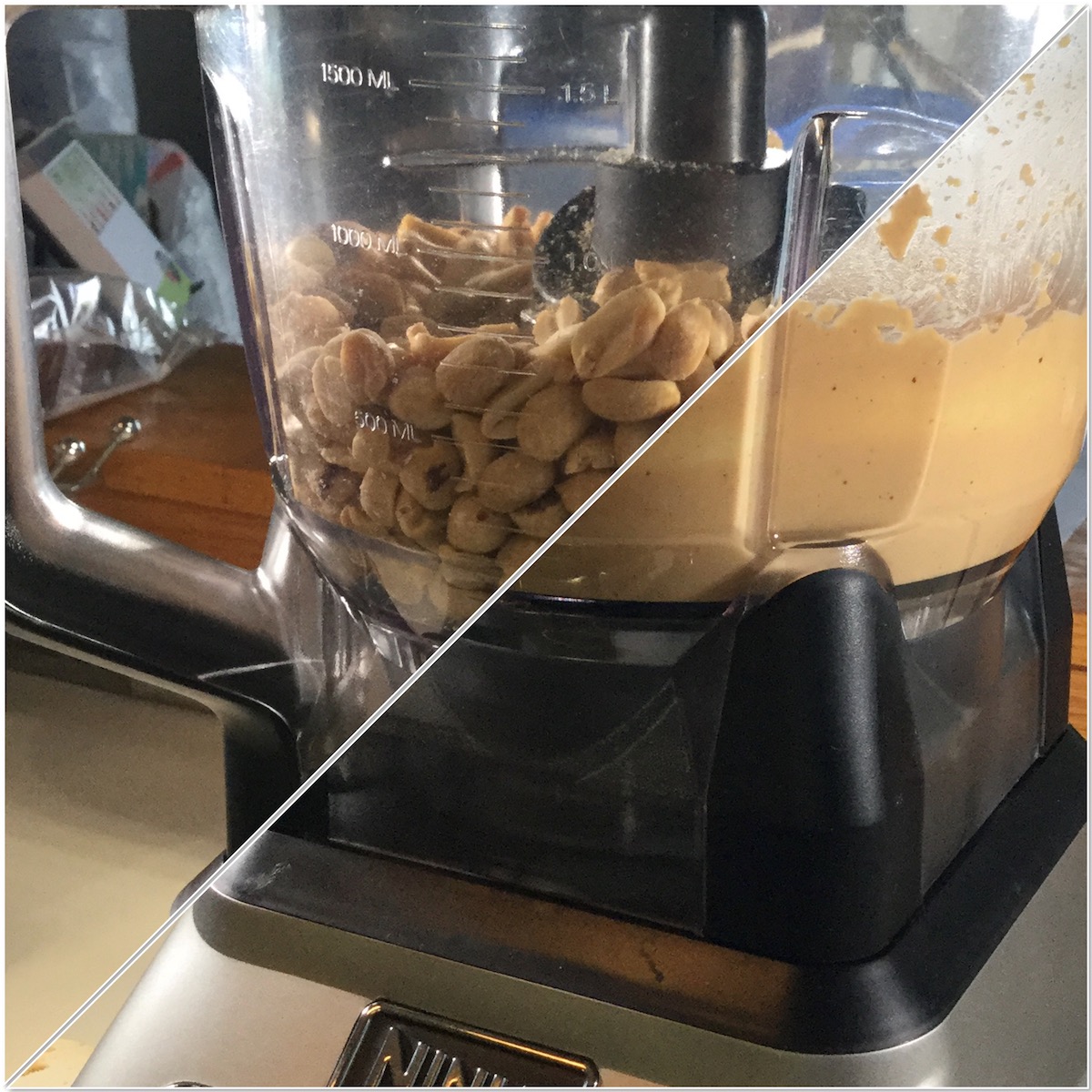 From peanuts to peanut butter in five minutes

You might ask why I’m warming peanuts that are already roasted? It isn’t strictly necessary, but warming the oils in the nut itself allows for a creamier final product.

Also, I’m using unsalted, dry-roasted peanuts. If the jar doesn’t specify dry-roasted, the peanuts will likely be roasted with oil(s). I want to be able to control how much oil I add to my peanut butter, if any (more on that later).

Plus, Claire would have roasted her peanuts without additional oils. ‘Nuff said.

How to make peanut butter in a food processor

Here’s what to look for when processing peanuts into peanut butter: 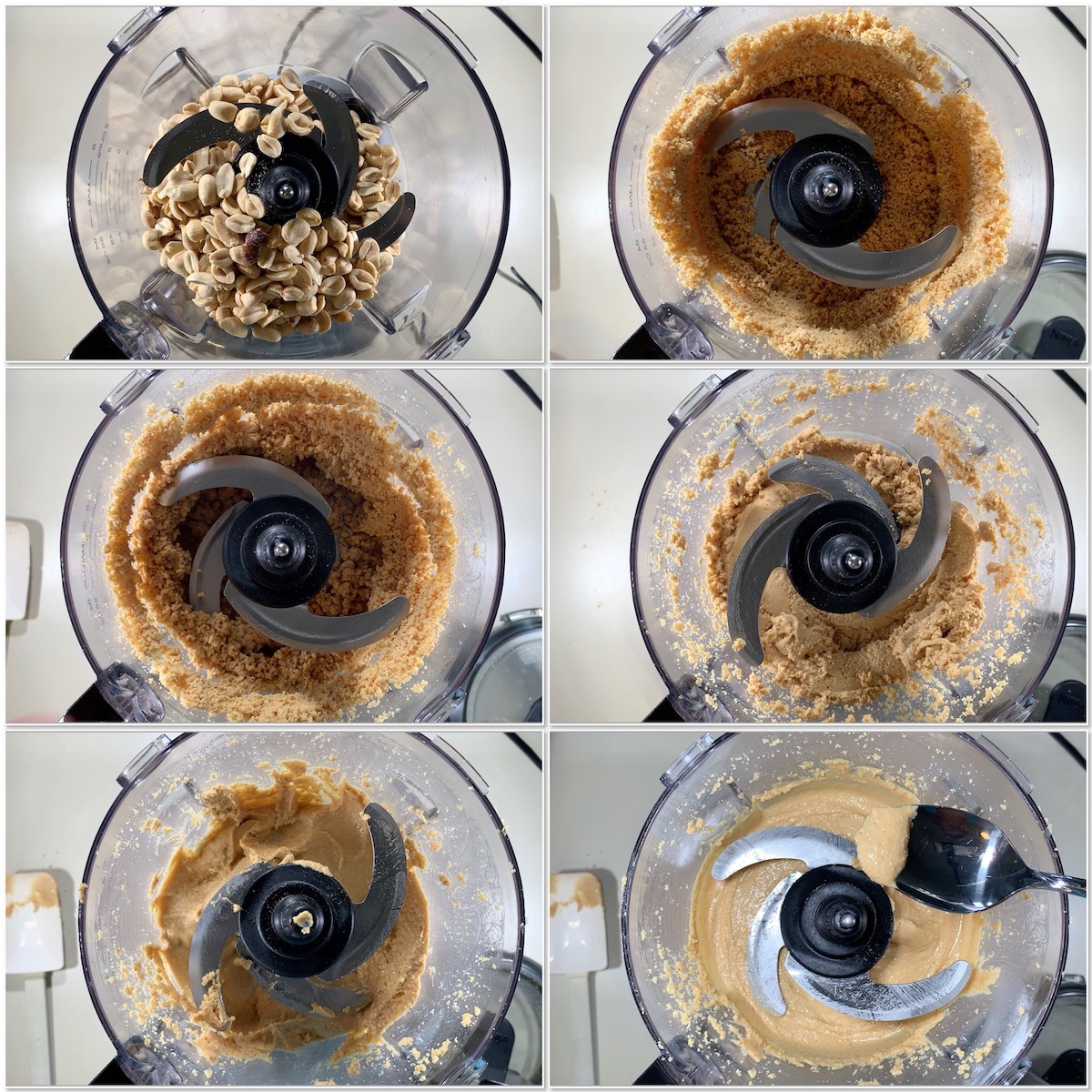 Making peanut butter is a matter of processing the peanuts through several stages, from dry & grainy to smooth & spreadable

A couple of comments here…

As I mentioned earlier, homemade creamy peanut butter isn’t as smooth as the commercial stuff. If you prefer, adding a tablespoon or two of a neutral oil when you add the salt and sweeteners will make it creamier. Peanut oil is best, but any unflavored oil will work.

Also, you don’t have to limit yourself to peanuts to have a homemade nut butter (especially if there’s a peanut allergy around). Almonds, cashews, sunflower seeds are but a few examples for viable alternatives. Use your favorite!

Like the Frasers, I couldn’t wait to try my homemade peanut butter. First I made a childhood favorite, a peanut butter and honey sandwich. No extra sweeteners needed! 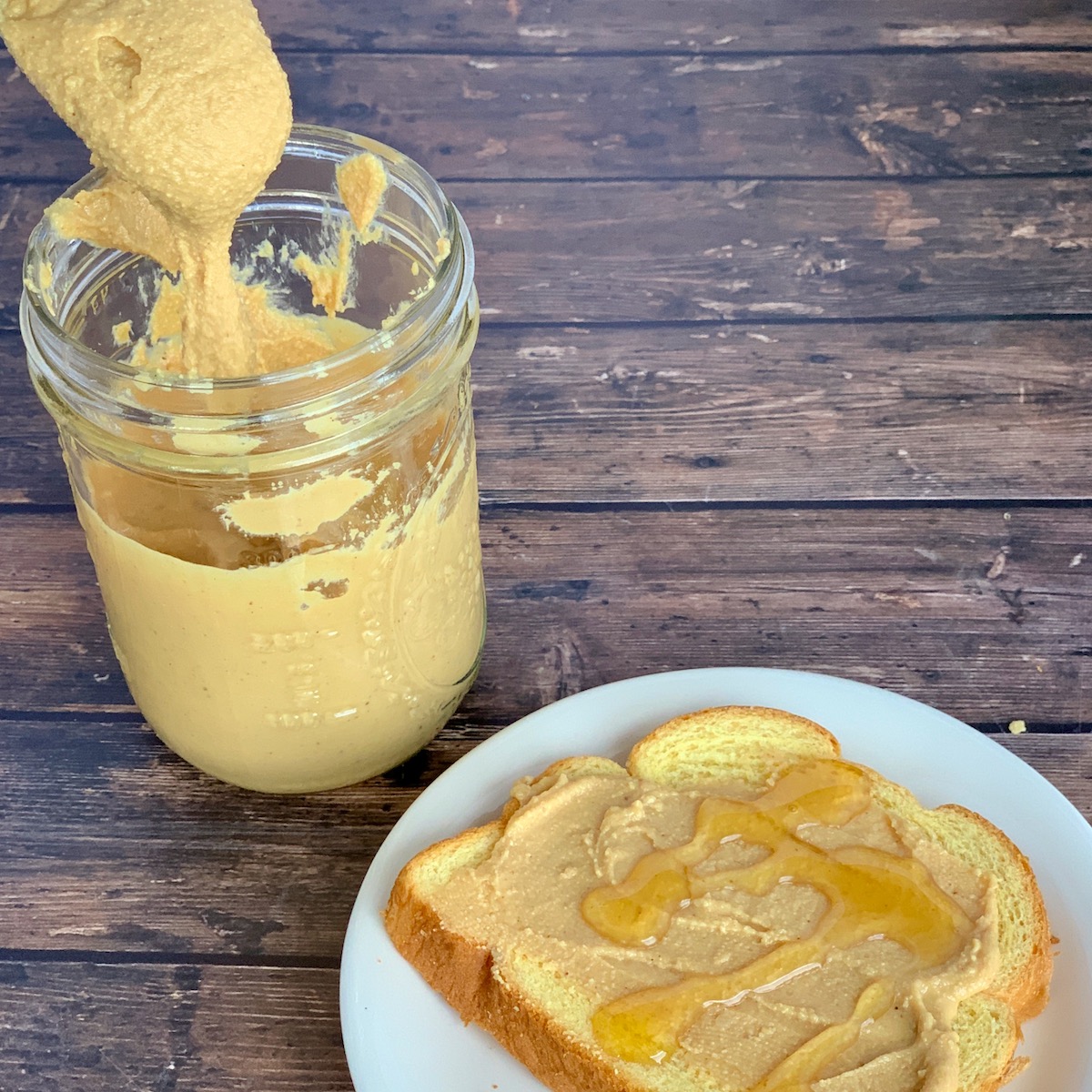 Then it was time to make a journey cake ala Claire.

I made a loaf of Multigrain Sourdough Bread and grabbed a jar of homemade strawberry jam that my sister had sent me. This sandwich was as authentic to Claire’s as I could recreate at home.

And how was it received? Well, first let’s remind ourselves of how Jamie tried his PB&J for the first time… 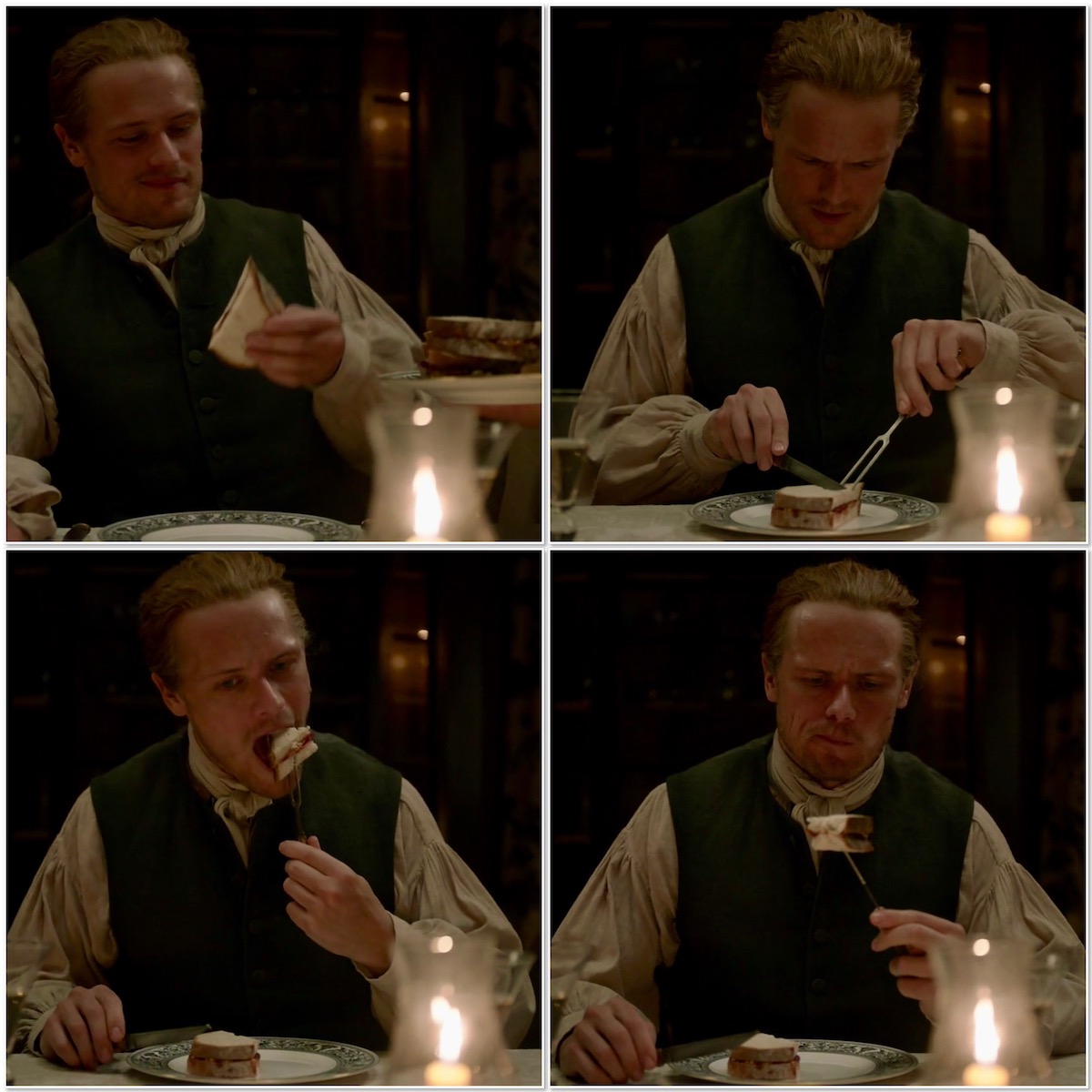 Since Jamie ate his sandwich with a fork and knife, I couldn’t resist… 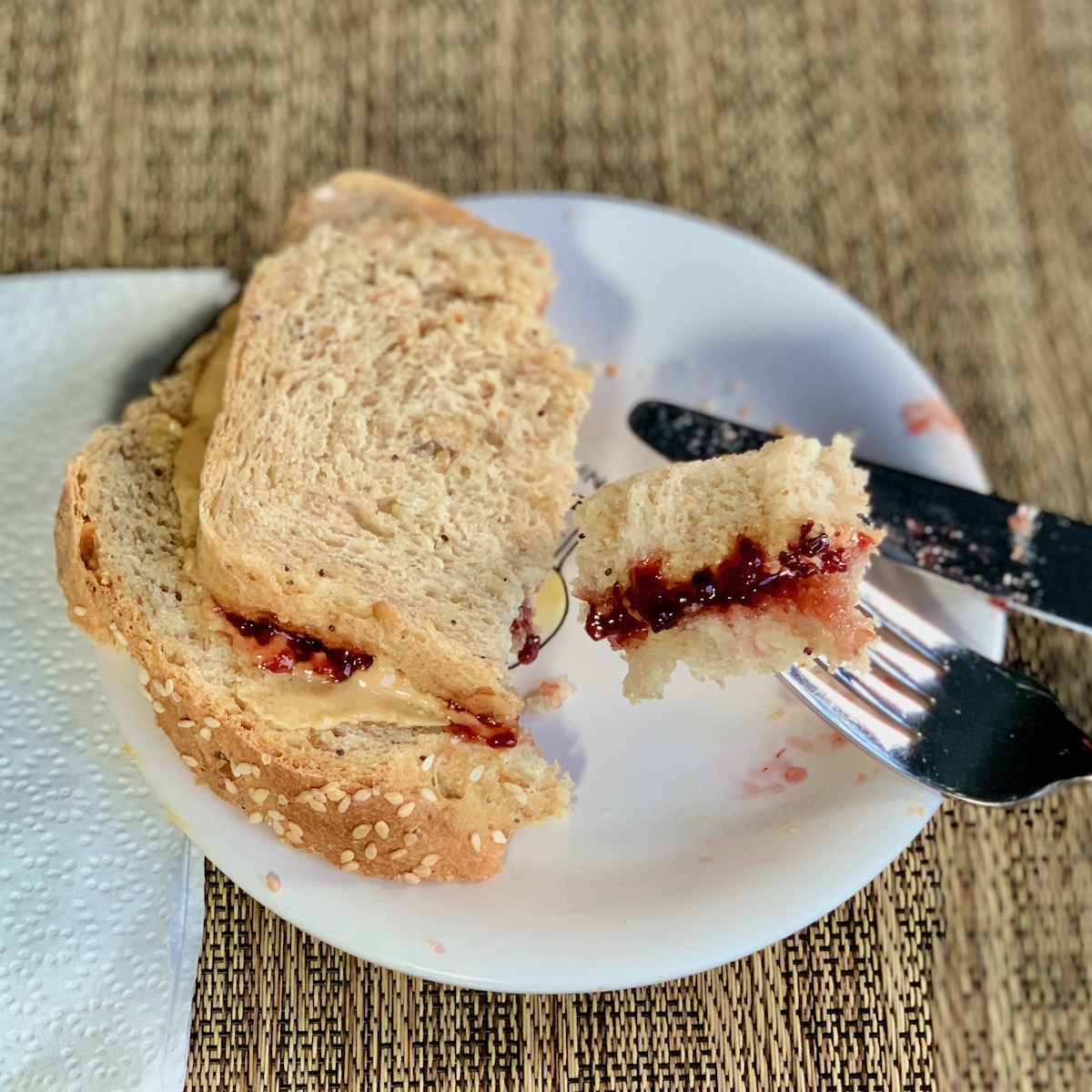 I think I’ll stick to eating sandwiches by hand. 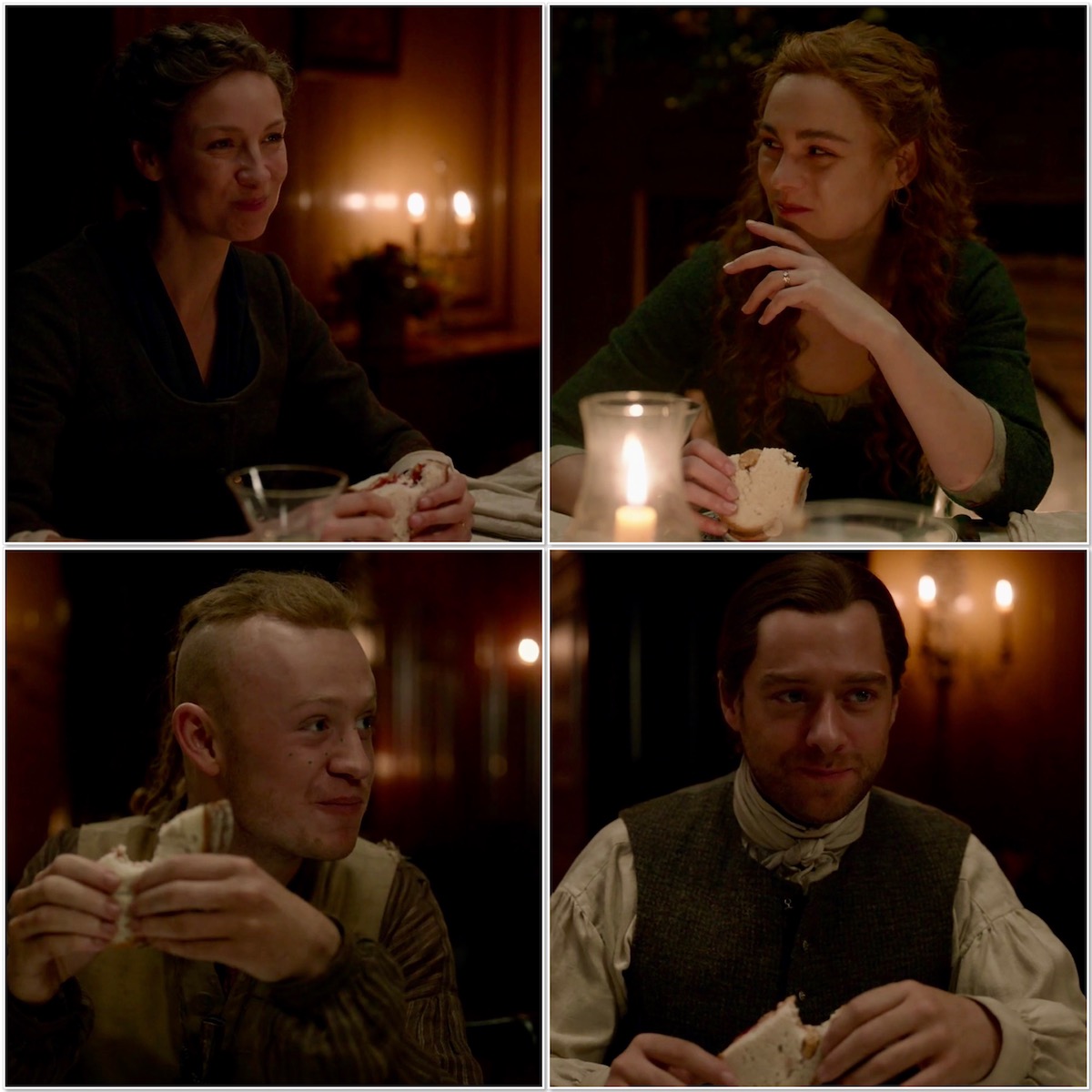 I prefer to eat my sandwiches the way the rest of the Frasers do. (photo credit: Outlander STARZ Season 5) 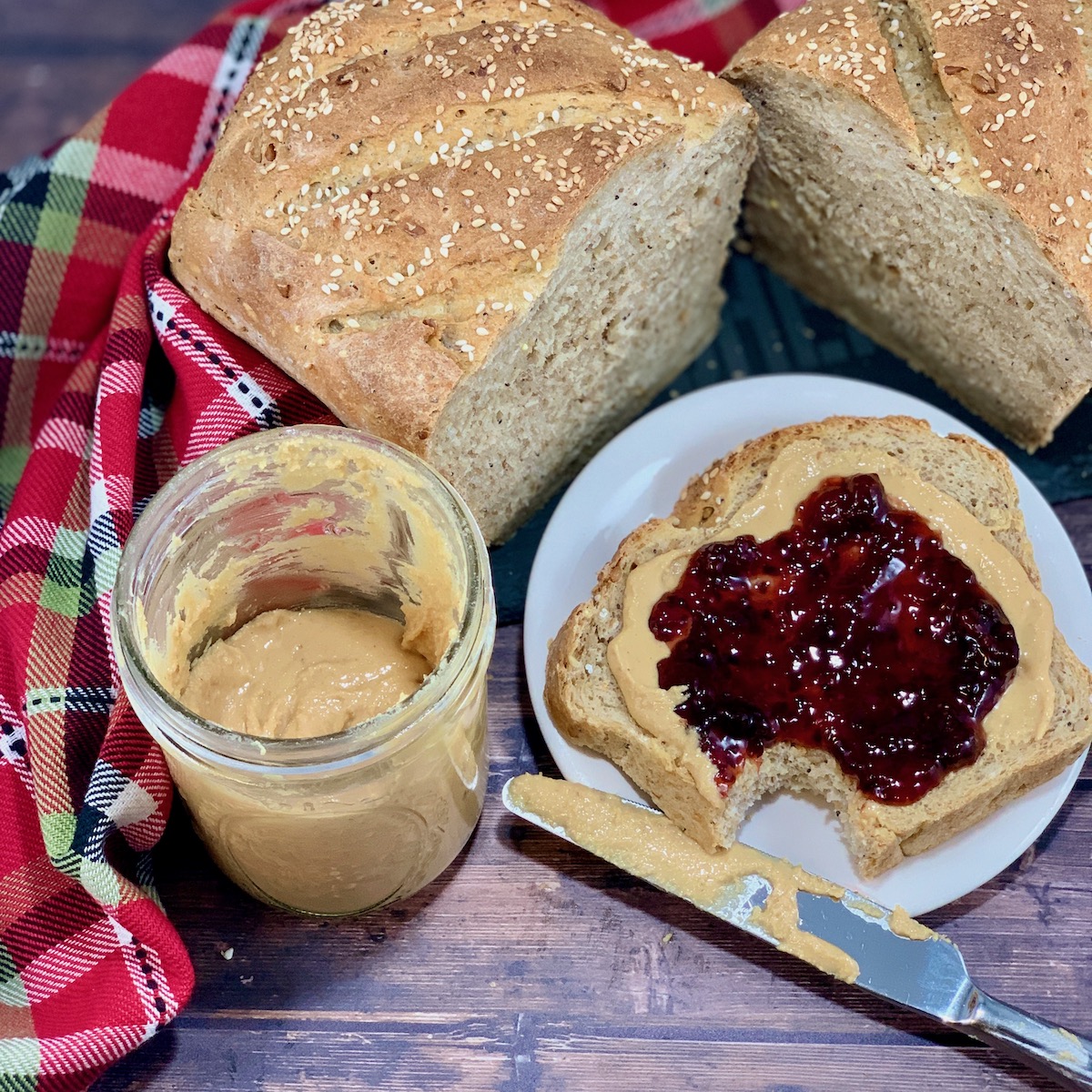 Peanut butter is such a flavorful ingredient, and there are so many ways it can be used. Peanut butter cookies or Thai peanut sauce are obvious choices.

You can also swirl a bit through softened chocolate or vanilla ice cream or through the batter for chocolate brownies before baking.

Or how about making another classic sandwich, New England’s Fluffernutter? It’s a peanut butter and marshmallow fluff sandwich, and I have just the recipe for homemade Marshmallow Creme ready.

I’m sure Claire and Brianna would have enjoyed one or two back in the day! 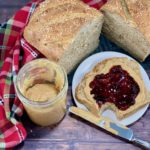 A one pound (454g) jar of roasted peanuts contains between 3-4 cups, and your yield will go up to about 1-1/2 cups of finished peanut butter if you want to use the whole jar. If you use raw peanuts, increase the roasting time to 10 minutes. Roasting is optional, but gives the finished peanut butter a deeper flavor. I avoided using peanuts that were already salted or roasted with peanut oil so that I could control the finished flavor and texture, but the choice is yours. For creamier peanut butter, add 1 to 2 tablespoons peanut oil or other neutral oil when adding in the salt. Peanut oil is best, but any unflavored oil will work. For sweeter peanut butter, add 1 to 2 tablespoons honey or other sweetener, again when adding in the salt. Also, You don't have to limit yourself to peanuts to have a homemade nut butter (especially if there's a peanut allergy around). Almonds, cashews, sunflower seeds are but a few examples for viable alternatives. Use your favorite! Did you make this recipe? Please share your pictures with the world on your social media channels. Tag @outlandercast (on Instagram and Twitter) and use the hashtag #howtheymadeitoutlander. I can’t wait to see your creations! 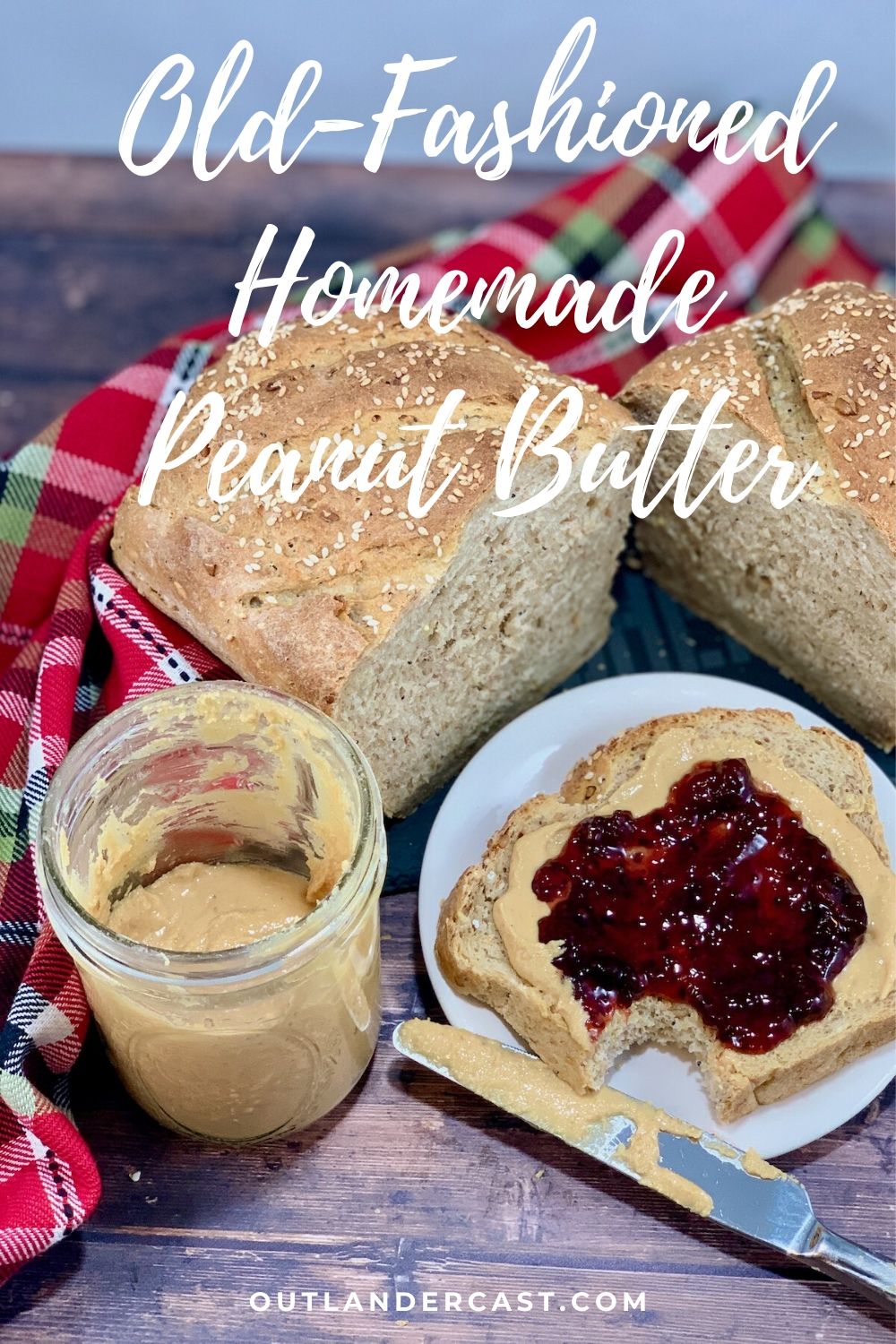 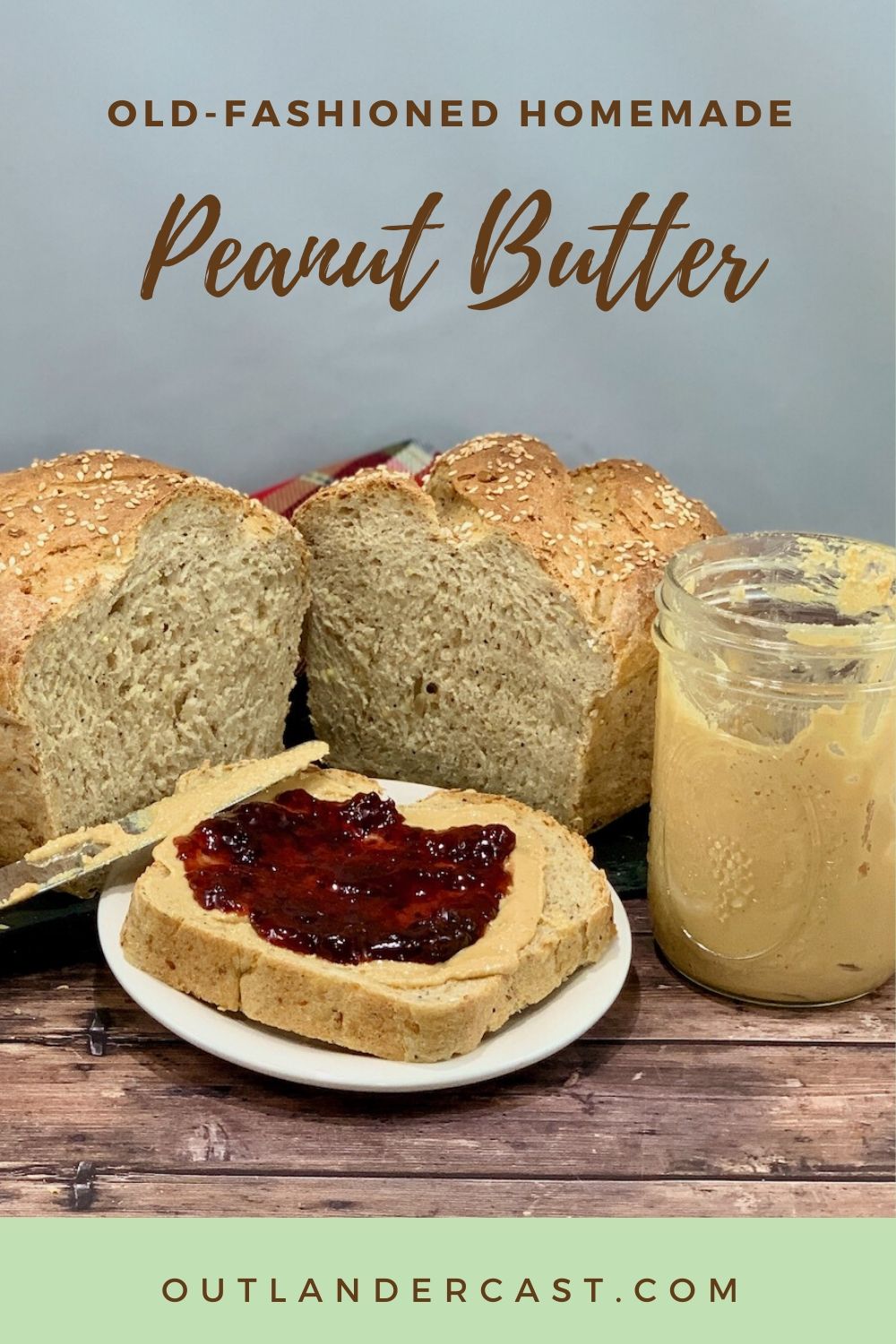