How They Made It: English Toffee for Holiday Gifting

Welcome back to our occasional series, “How They Made It,” where we explore the food and drink of Outlander. This time we’re making American-style English Toffee for the holidays. Slainté!

I have a confession, one that won’t surprise any of you. I like to make and send food gifts for the holidays. (No, say it ain’t so!)

I’ve sent Whisky Fudge, Pecan Snowballs, and one of my all-time favorites, Scottish Shortbread. All those treats are easy to make and ship well, all important criteria for successful food gifts.

Giving food as gifts is a well established tradition in many parts of the world, and Scotland is no exception. In fact, when celebrating First Foot (the first New Year’s visitor), a tall dark man is supposed to come bearing Black Bun, shortbread, and some whisky, among other gifts.

Yeah, maybe Jamie wouldn’t qualify with his red hair but Roger would, and I certainly wouldn’t turn either away!

How about English Toffee?

I thought English Toffee would be included in that list. It’s a classic candy from England, right? English Toffee, as I know it, is crunchy, buttery, with a blanket of chocolate and a dusting of almond meal.

(Hang on, that’s not my idea of toffee!)

Well, I’m not surprised. English toffee recipes vary depending which side of the Pond you’re on.

A quick primer on English Toffee

Toffee’s popularity really took off in England and Europe in the early 19th century when cheap sugar was more plentiful. The first known reference to it appeared in the Oxford English Dictionary in 1825. However, that toffee (like what’s referred to as toffee in England now), is soft and chewy (like taffy here in the US).

When British cooks do make the harder type of toffee, they use brown sugar, resulting in a more pronounced molasses flavor. Americans cooks use white granulated sugar in their toffee recipe, giving the butter a more prominent role.

American-style English Toffee (aka Buttercrunch Candy) is hard and crunchy, and generally contains nuts (most often almonds) either in the toffee itself or as a topping.

I’m in that latter camp, so my English Toffee recipe, adapted from Creme de la Crumb & Taste of Home, doesn’t include nuts in the candy itself. Using almond meal instead of chopped almonds further lets the toffee itself shine.

Oh, and why is our American version called English Toffee? I couldn’t find a good answer, but it does sound more posh to an American ear, so I’m going with that.

How is toffee made?

At its core, English Toffee is just sugar that’s been caramelized with butter, then poured quickly onto a tray and allowed to cool. Other ingredients are for flavor and garnishing the toffee candy itself.

The consistency of the finished toffee depends on the proportion of sugar to butter and the temperature to which the mixture is heated. The higher the temperature, the harder the toffee will be. For crunchy English toffee, the sugar is heated to as much as 300°F. More on that later.

Incidentally, the presence of corn syrup is here to stabilize the sugar so it cooks properly and doesn’t crystallize, like when making Caramel Sauce. It isn’t strictly necessary, but I’d rather be successful than sorry. 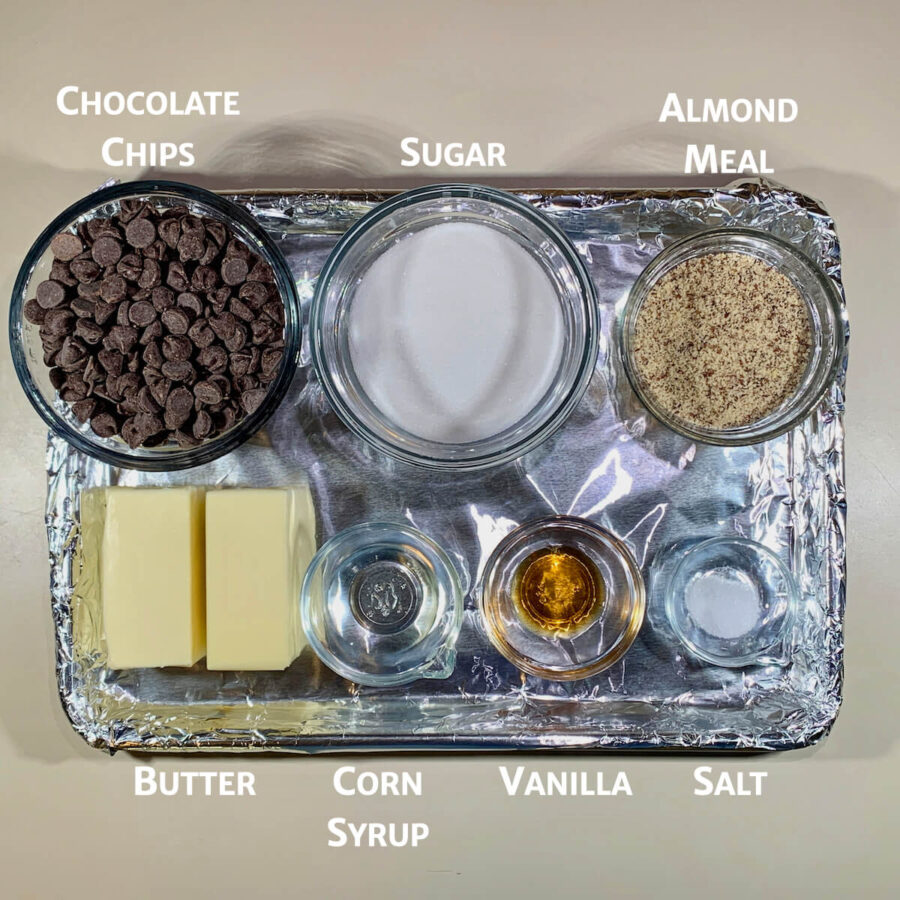 Butter and sugar are at the core of English Toffee. The rest are flavorings and garnishes.

An easy toffee to make

The actual method for making English Toffee really is quite simple. But there are some important points to watch for.

Be attentive while you’re making the candy

While you’re cooking the sugar and butter, stir, stir, STIR, then stir some more. This serves two purposes, to keep the sugar from burning and to keep you aware on when to stop cooking.

The mixture’s temperature rises quickly at first, but slows at the end lulling the inattentive chef into a false sense of timing.

Remember, the higher the temperature, the more brittle your candy will be. Choose wisely.

How to tell when the toffee is ready

Many chefs rely on the toffee’s color, from a light tan (like raw almonds) to light golden brown (think peanut butter) to know when to pull it off the heat.

This method is a little too vague for me. I prefer the precision of using a digital thermometer (or a candy thermometer clipped to the side of the pan) to make sure the candy reaches hard-crack stage (at least 300°F). 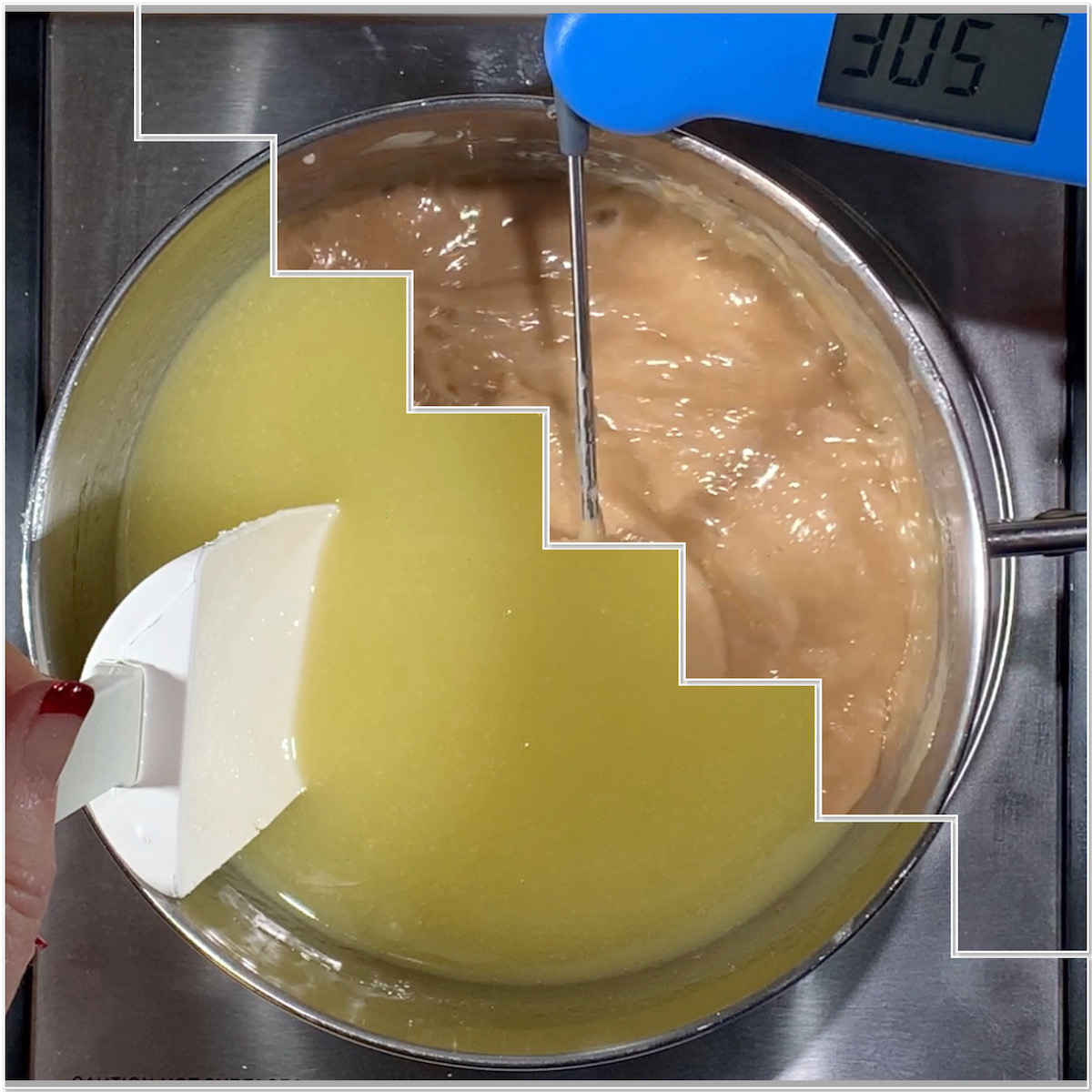 Cooking the sugar and butter (plus corn syrup, vanilla, salt) to 305°F. I like crunchy English Toffee.

Work quickly when the toffee is to temperature

Once the toffee has reached the target temperature, it’s time to pour it into a greased baking pan. Work quickly, but carefully…that sugar syrup is hot!

After the chocolate is spread out, sprinkle on the almond meal (or toasted chopped almonds, if you’re so inclined). 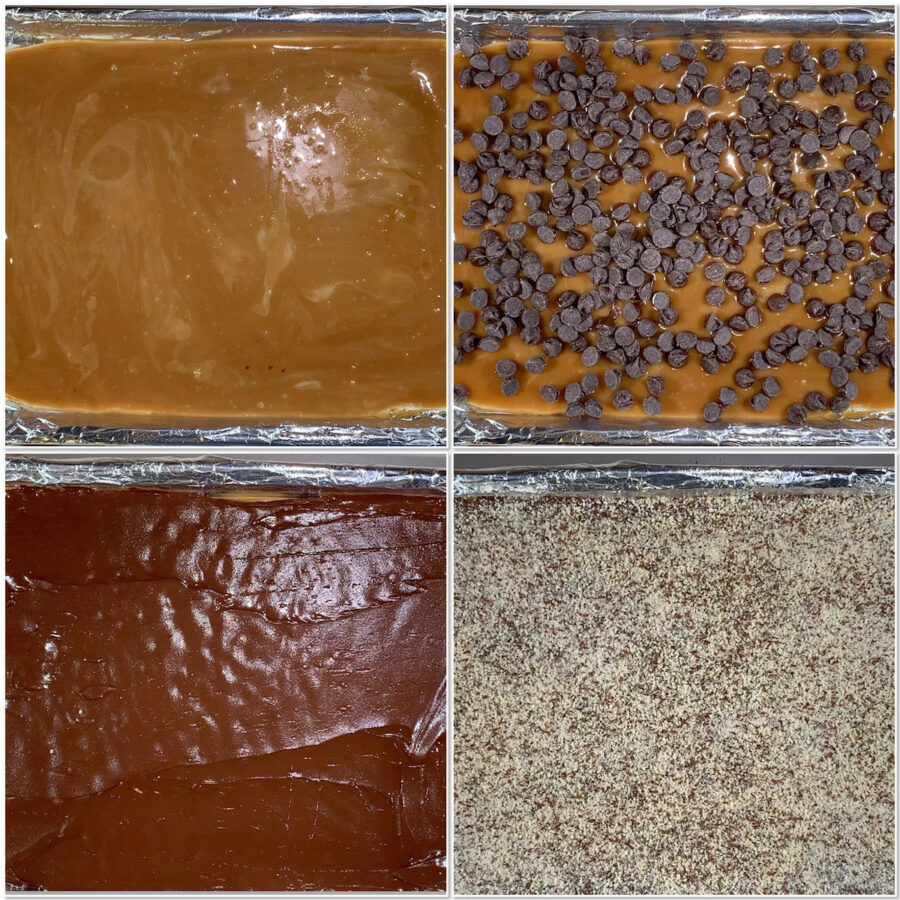 Work quickly to get the candy spread into the pan, topped with chocolate, and dusted with almond meal

Now comes the hardest part of all, waiting one to two hours for the toffee to be cool enough to break apart.

Yes, those small pieces are fair game to munch on while you work! 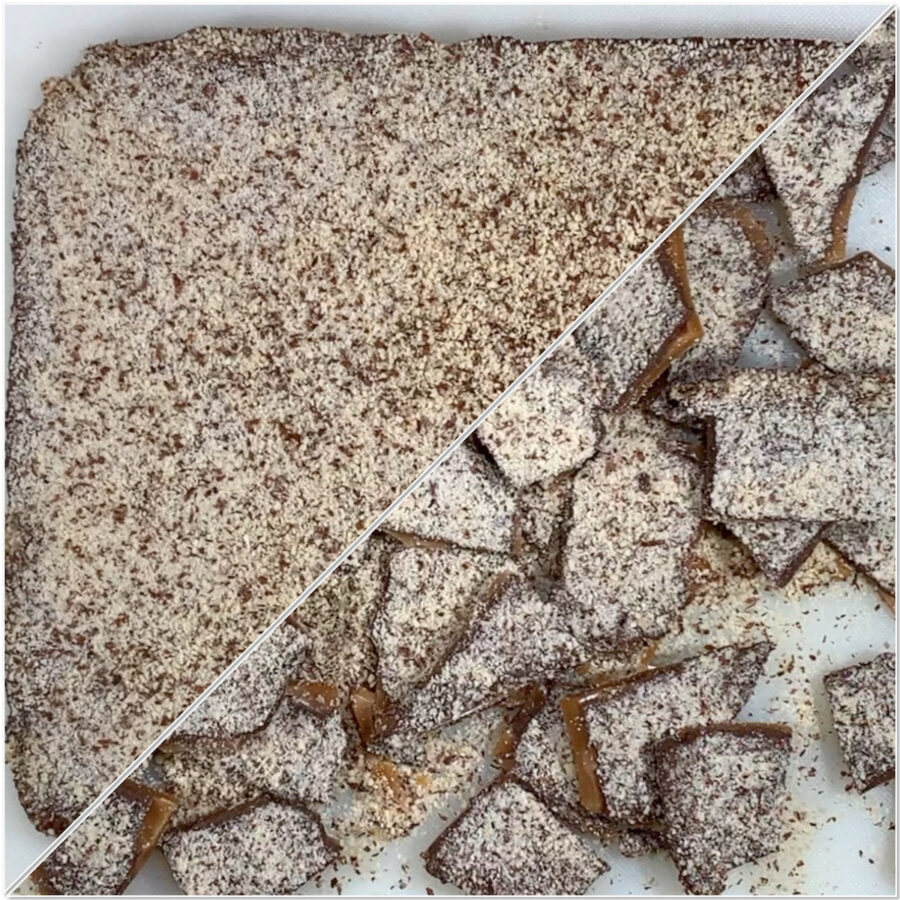 Probably the most satisfying part of the whole process…breaking up the candy slab!

Easy to make and worth the wait

As I said earlier, this is an easy English Toffee recipe to make. You may have to wait a couple of hours before breaking it apart, but it’s certainly worth the wait.

This crunchy toffee features a buttery caramel flavor complemented by creamy chocolate. The almond meal adds a nice earthy counterpoint to keep the candy from being cloying. 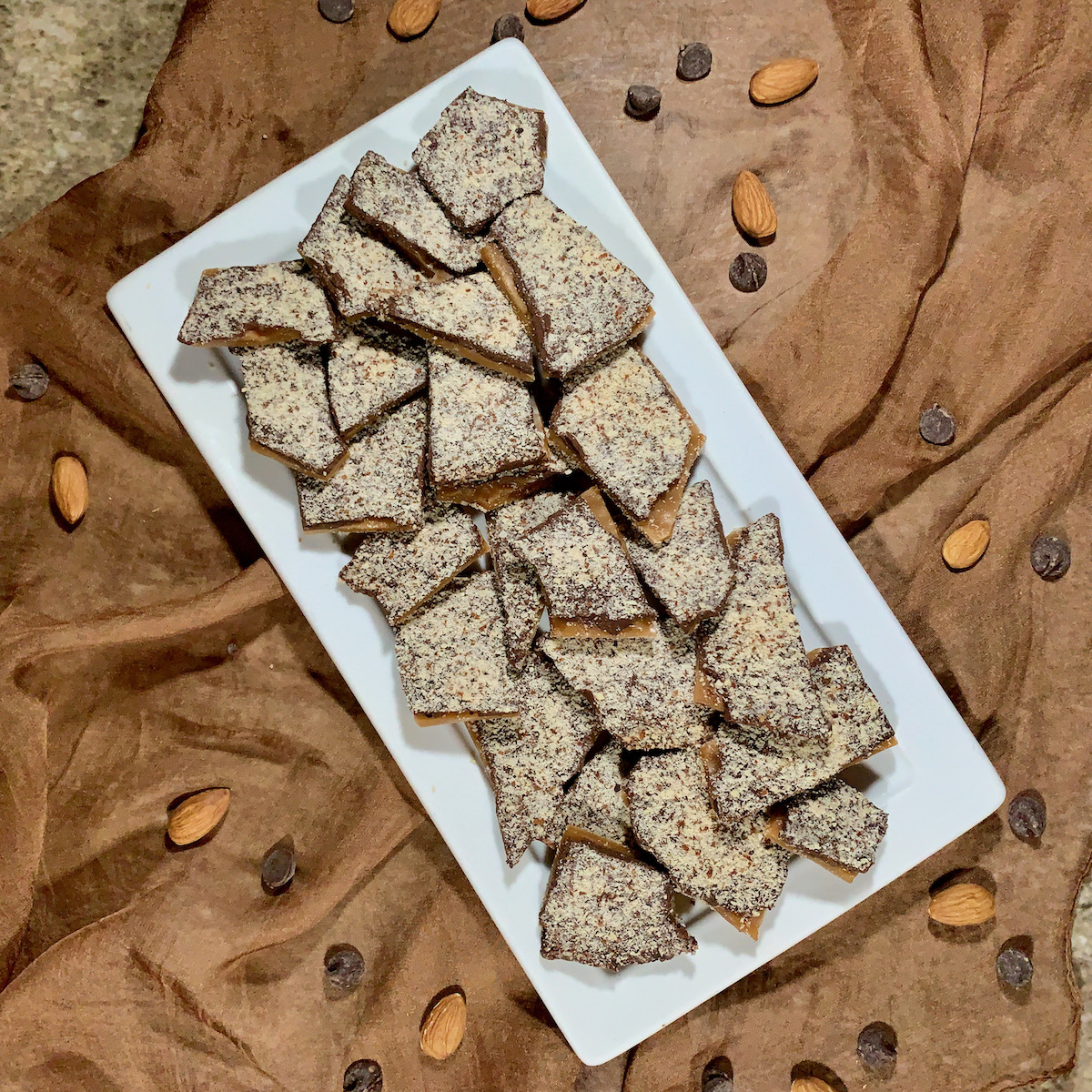 English Toffee is naturally gluten-free, making it perfect for those wanting a sweet treat when baked goods are out of reach (Passover comes to mind).

It’s festive and impressive, and ships well (remember, that’s the food-gift-giving criteria!). Christmas, Hanukkah, Kwanzaa, Hogmanay, or any other holiday will be that much more special if you make a batch of English Toffee. 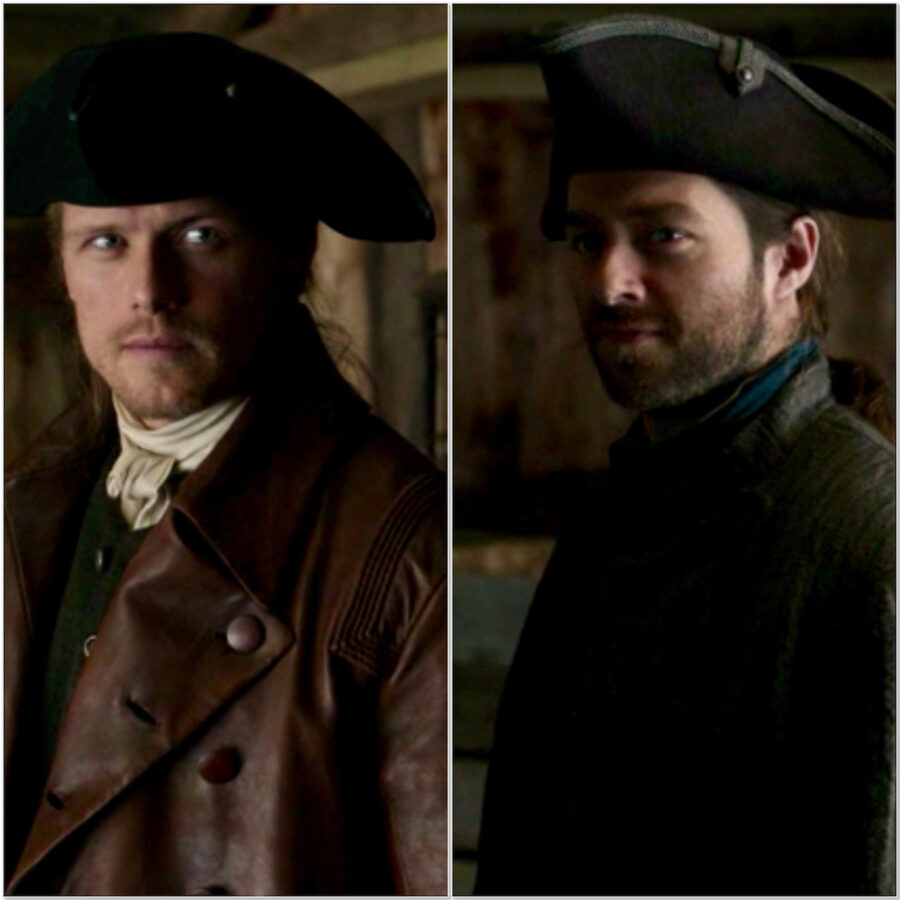 Yes, either of these fine men would be welcome for First Foot, especially if they brought toffee! (photo credit: Outlander STARZ Season 5 Episode 10)

One last warning…this yummy English Toffee is addictive. I’ll reach for a piece when I want small bite of something sweet. The harder part is restraining myself from taking more.

Maybe some tall dark man will bring me some for First Foot? A girl can dream!

What is your family’s tradition for the December holidays? 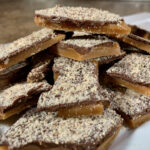 For a crunchier nut topping, replace the almond meal with ¼ cup toasted chopped almonds. You can also use chopped pecans or walnuts, whatever you prefer. Some recipes call for putting 1 cup of whole toasted almonds on the baking pan before adding the toffee. It's a personal preference of course, but I'd focus on the toffee this time (no judgements!). Experienced candy makers can tell by the toffee's golden-brown color if it's ready, but I prefer the precision of using a digital thermometer (or a candy thermometer clipped to the side of the pan) to make sure the candy reaches hard-crack stage (at least 300°F). Use a good heavy-bottomed saucepan to avoid having your toffee burn. This recipe makes about 1¼ lb of toffee, and each piece weights about 2/3 oz (20g). Did you make this recipe? Please share your pictures with the world on your social media…tag @outlandercast (on Instagram and Twitter) and use the hashtag #howtheymadeitoutlander. I can’t wait to see your creations! 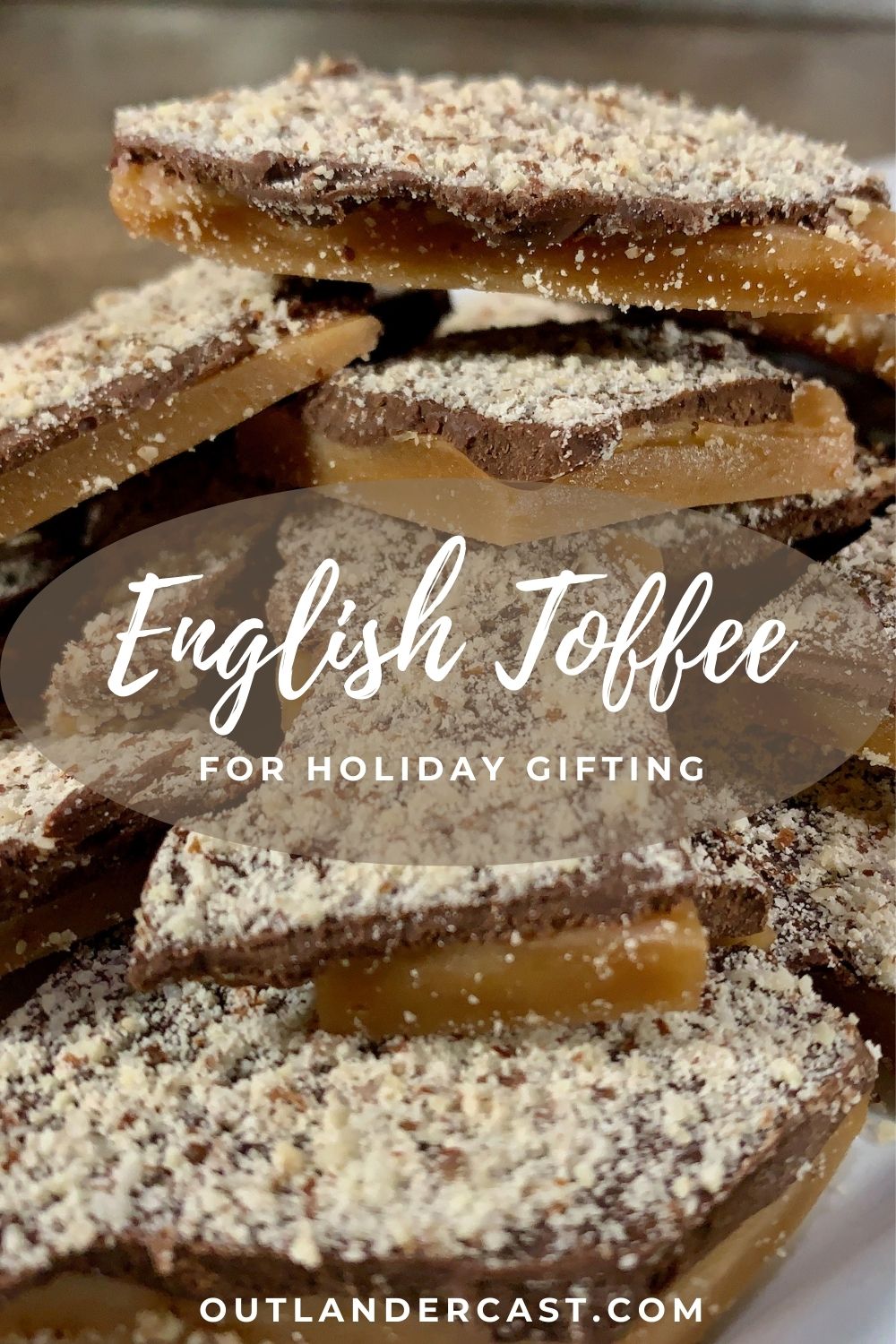