How They Made It: Claire’s Spotted Dick with Vanilla Custard

Welcome back to our occasional series, “How They Made It,” where we explore the food and drink of Outlander. This time we’re back in Claire’s rustic Fraser’s Ridge kitchen as she makes spotted dick steamed pudding. Slainté!

Once again, across the pond, it means something else entirely…

Okay, let’s get this out of the way immediately: what’s the first thing you think of when you hear of spotted dick? If you’re on the US side of the pond, you probably thought the same thing as I did, and it wasn’t food. Remember how the term flapjacks meant something different to the Brits than the Yanks? Here’s another example of how the English and the Americans are two peoples separated by a common language; here spotted dick is a steamed pudding usually served with a custard sauce. 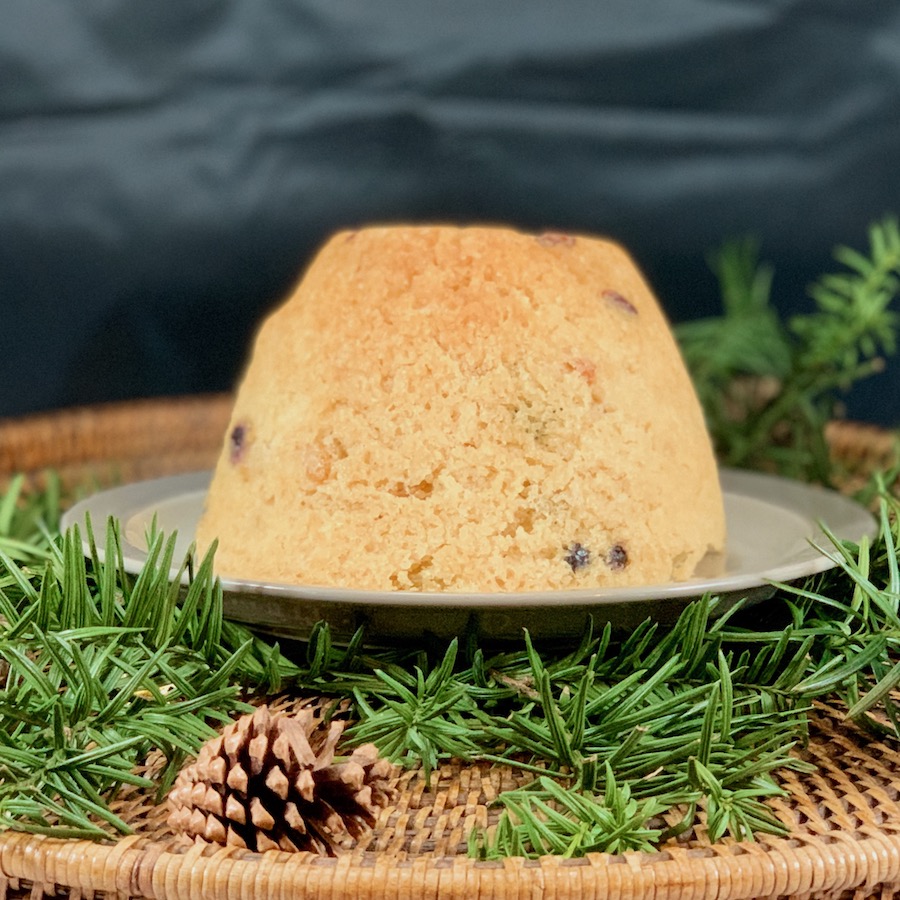 Steamed (or boiled) puddings have been around in some form for centuries. Originally meats were boiled with fruits and grains and cooked in some sort of animal-derived casing (think haggis and sausages). As sugar became more available, the dishes swung more to the sweet side (and the meat disappeared). Boiled (then steamed) suet puddings came into being, albeit cooked in a cloth rather than a sheep’s stomach or pig’s intestine.

Steamed suet puddings really came into their own during the Victorian era, morphing into versions that people would recognize today. The traditional Christmas pudding of A Christmas Carol being one such example – a dried fruit-studded, alcohol-laden sponge usually made weeks ahead in order to mature. Indeed Christmas puddings are similar in style to the black bun served at Hogmanay, though not encased in pastry. Because we talked about black bun last year, I decided to focus on another steamed suet pudding I came across, spotted dick (which I had never heard of before, let alone tried). At first I thought they were one and the same (the reason I thought to write about it in December), but I soon found out that spotted dick was served year-round. Oh well, that’ll teach me to do my research earlier. 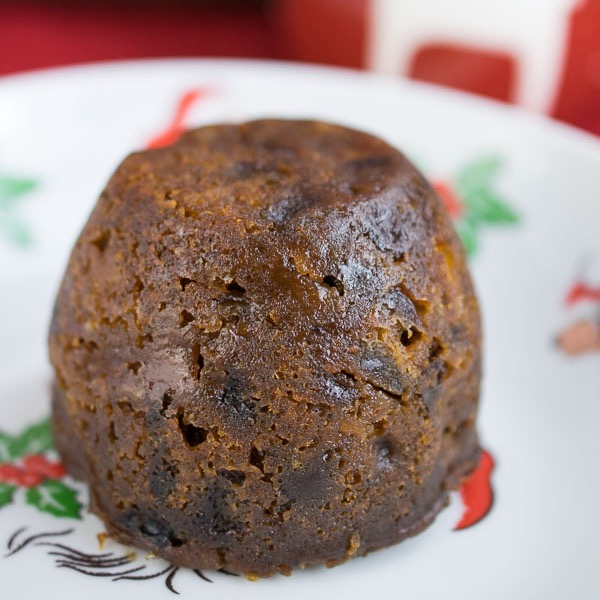 Suet, by the way, is beef fat that is taken from around the liver and imparts a rich flavor that doesn’t detract from the other ingredients. You can sometimes get suet from a butcher’s counter (you have to render it yourself, then grate it), or you can just buy it already prepared. I did the former, wanting an “authentic experience” (silly, me). It wasn’t hard to render and grate, mind you, it just added time. You can also substitute butter for the suet, and your pudding will probably cook faster (suet has a higher melting point than butter). The ultimate flavor profile will be altered, so be aware.

Back to that name…

As I said before, spotted dick is a funny name to the American ear, and I wondered why was it called that? The “spotted” part is easy, referring to the currants and sultanas (raisins in the US) traditionally used (easy enough). But the “dick?” Well, numerous searches had differing opinions, and none of them mentioned a man named Richard or a part of male anatomy, spotted or otherwise. Instead, most sources I read said the term “dick” derived from the word “dough” and referred to the pudding itself. How very… deflating (yes, I went there!).

Even though spotted dick isn’t technically from the 18th century, I can imagine that Claire would have been familiar with spotted dick and accustomed to having it with a custard sauce. Since the denizens of the Ridge would have known about boiled puddings, I thought it acceptable that she might have made it herself or told her (soon-to-be-revealed) cook about it. The recipe I chose for Claire’s spotted dick came from Sorted Food (here’s their accompanying video). Whether she made it for Christmas or at another time is a different subject altogether.

[Side note: Every Nook & Cranny had a good Christmas Pudding troubleshooting guide that gave a lot of tips. It was especially useful for a newbie like me.] 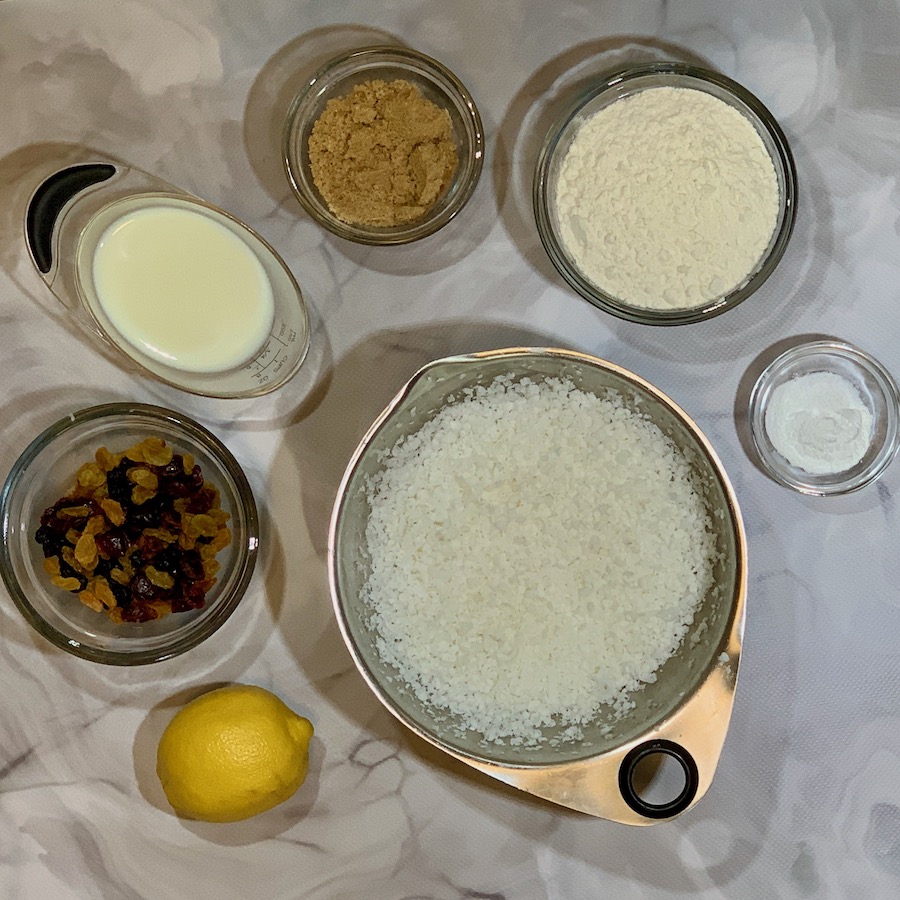 Ingredients for spotted dick include flour, suet, dried fruit and a lemon for brightness (check out my rendered & grated suet!) 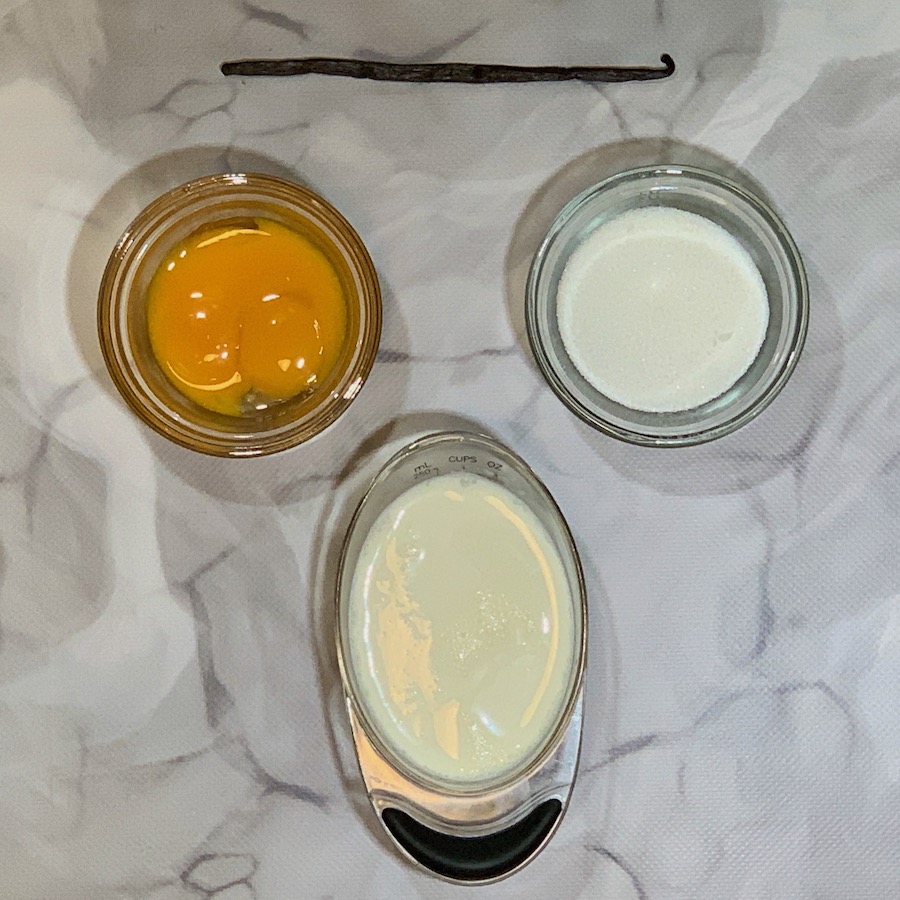 The ingredients for vanilla custard are much simpler

I had to make do with a 1-quart batter bowl rather than a traditional 0.9-litre pudding basin. It was the right shape at least, and it fit inside an 8-quart stockpot. From all the videos I watched on preparing a steamed pudding, I actually think it was easier because there was more room to maneuver the bowl inside the pot. I didn’t have to come up with make-shift handles to get the hot bowl out of the pot at the end of cooking. Given all that I learned on making a steamed pudding, I counted this as a point in my favor. 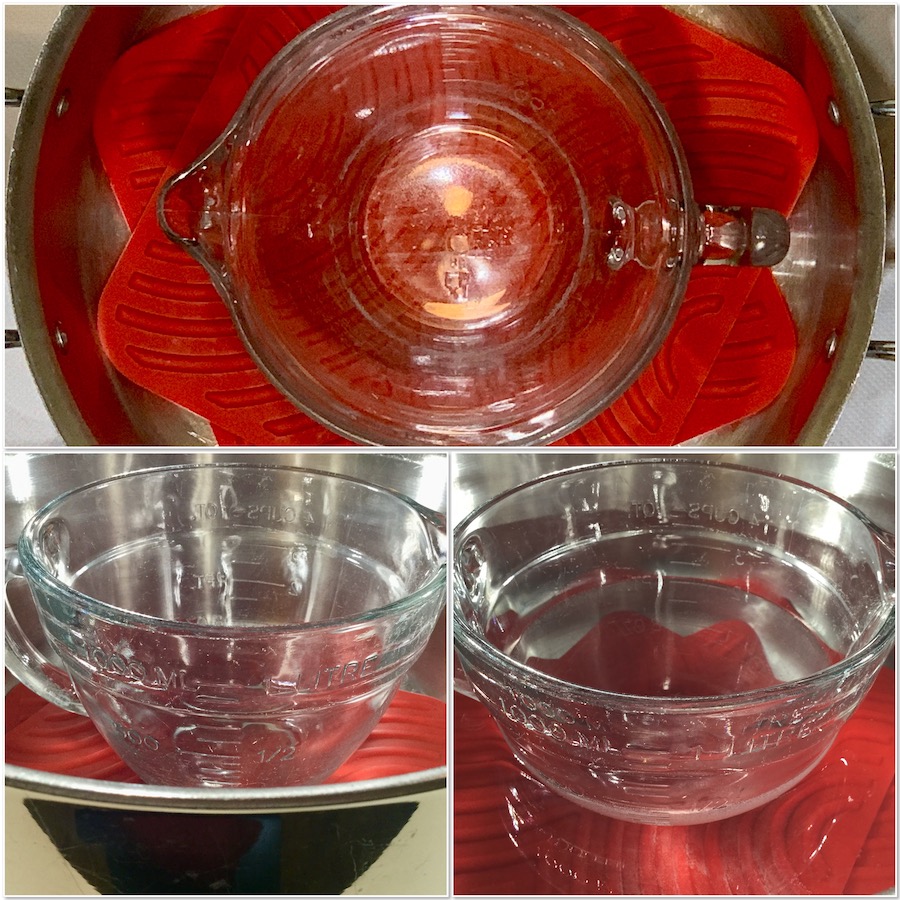 My 8-quart stockpot had more room for the 1-quart batter bowl I used for the pudding basin than the combinations I saw in videos.

By the way, even though currants, along with candied citrus, are traditional in spotted dick, you can substitute any dried fruit you’d like. In a nod to my being in New England, I used a combination of dried cranberries and blueberries (much as I did in the aforementioned black bun). I don’t think Claire would object. 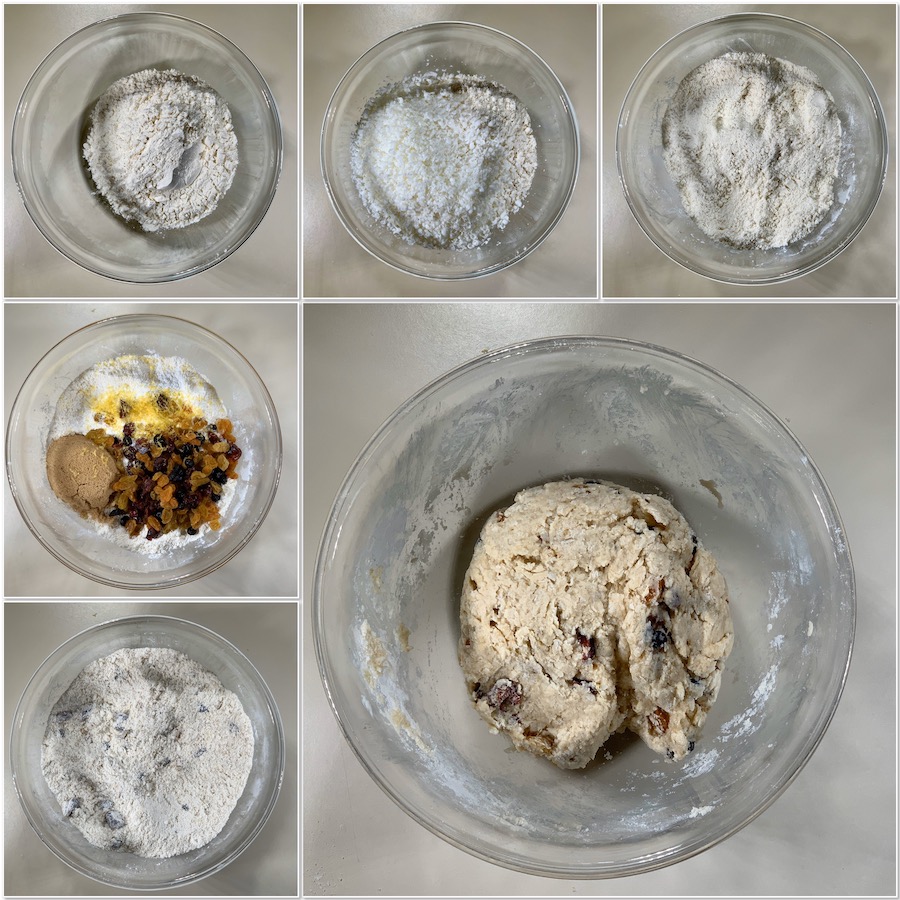 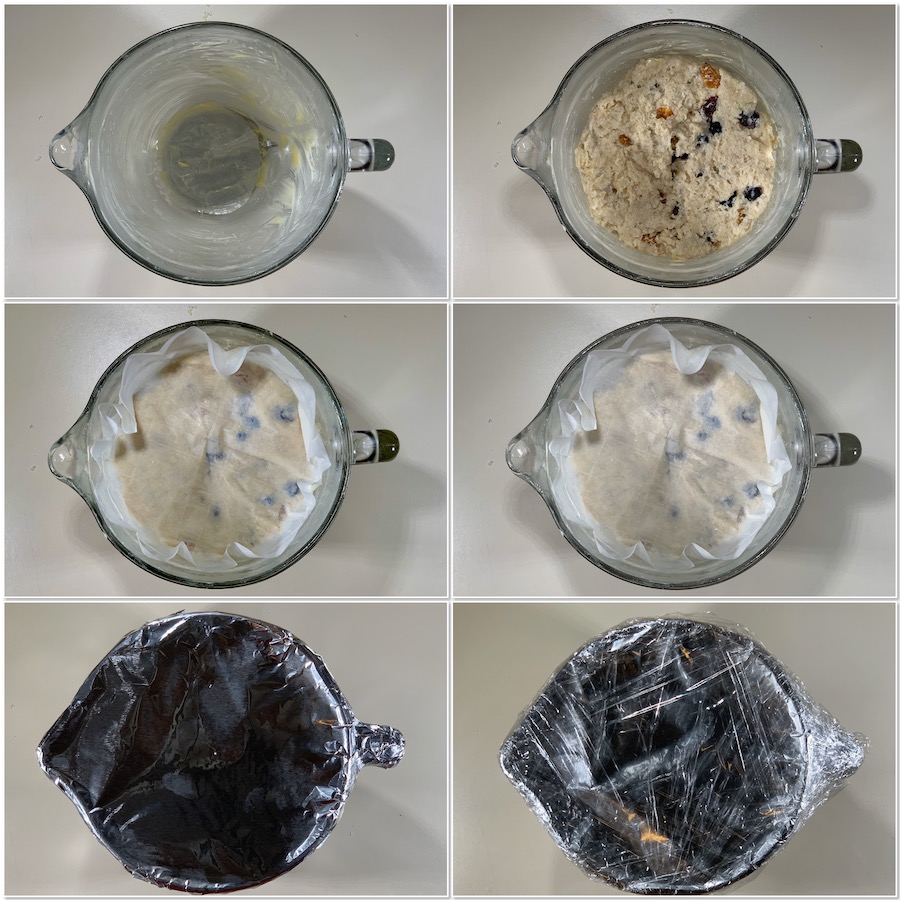 Once again with custard

We’ve talked about vanilla custard (aka crème Anglaise or vanilla sauce) before; it’s in the same family as pastry cream, egg custard, bread pudding and eggnog. Basically it’s a combination of milk and cream, egg yolks and sugar flavored with vanilla. You mix the egg yolks and sugar together, gently add warmed vanilla-flavored cream, then cook it on the stove until thickened. By the way, if you use a real vanilla bean to infuse your cream, you can have the extra benefit of saving the spent pods to make your own vanilla extract. Win! 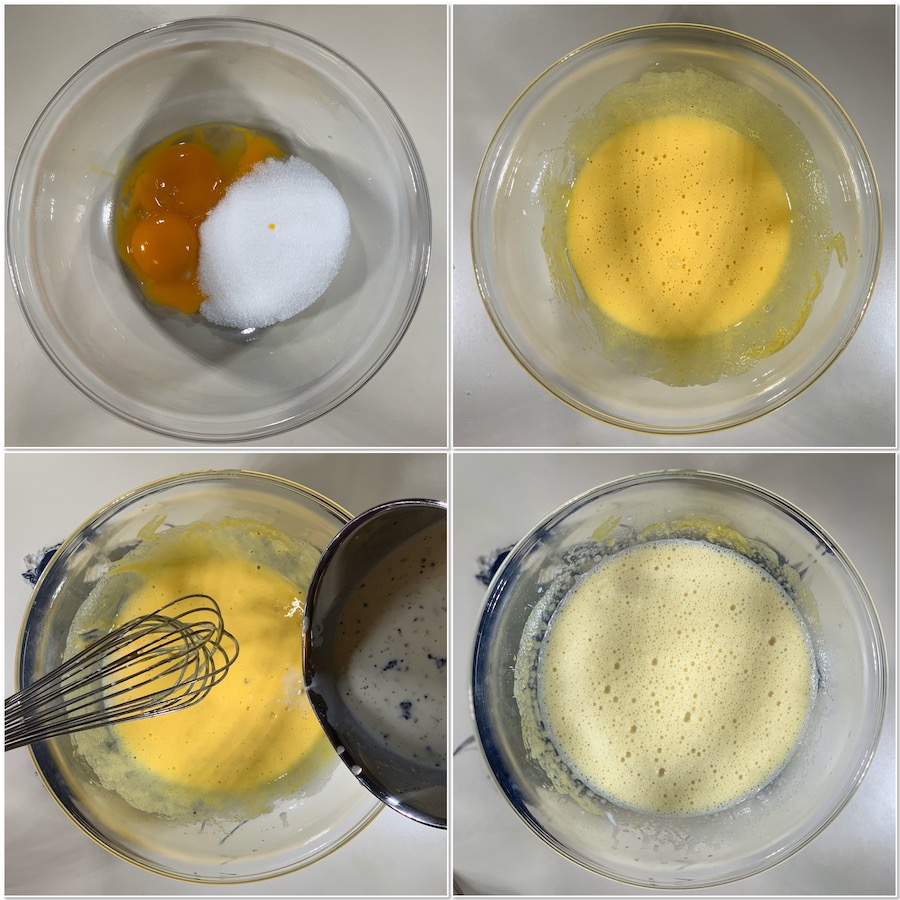 The vanilla custard is straightforward and easy to make 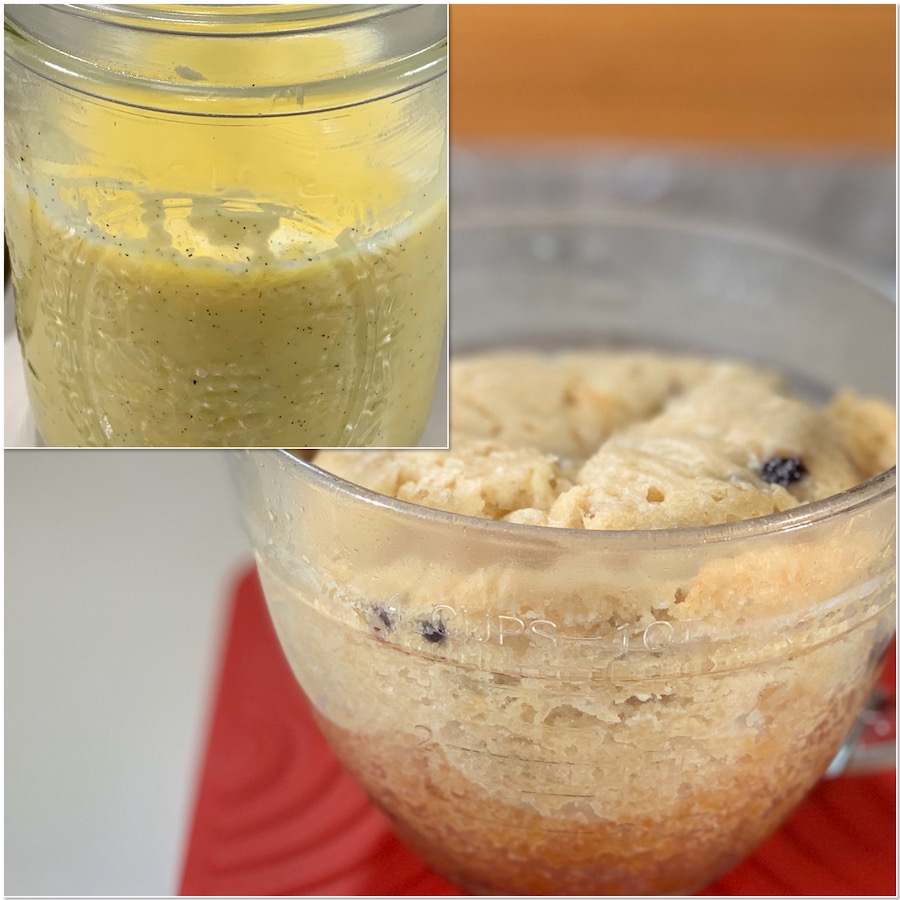 The finished components waiting to be married on a plate 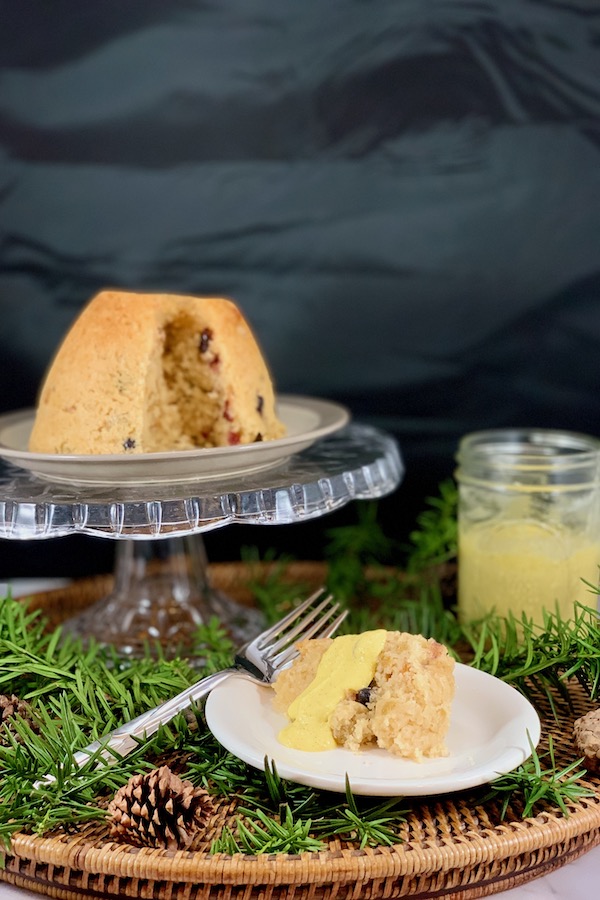 Having a slice of spotted dick with vanilla custard… this is luscious comfort food! 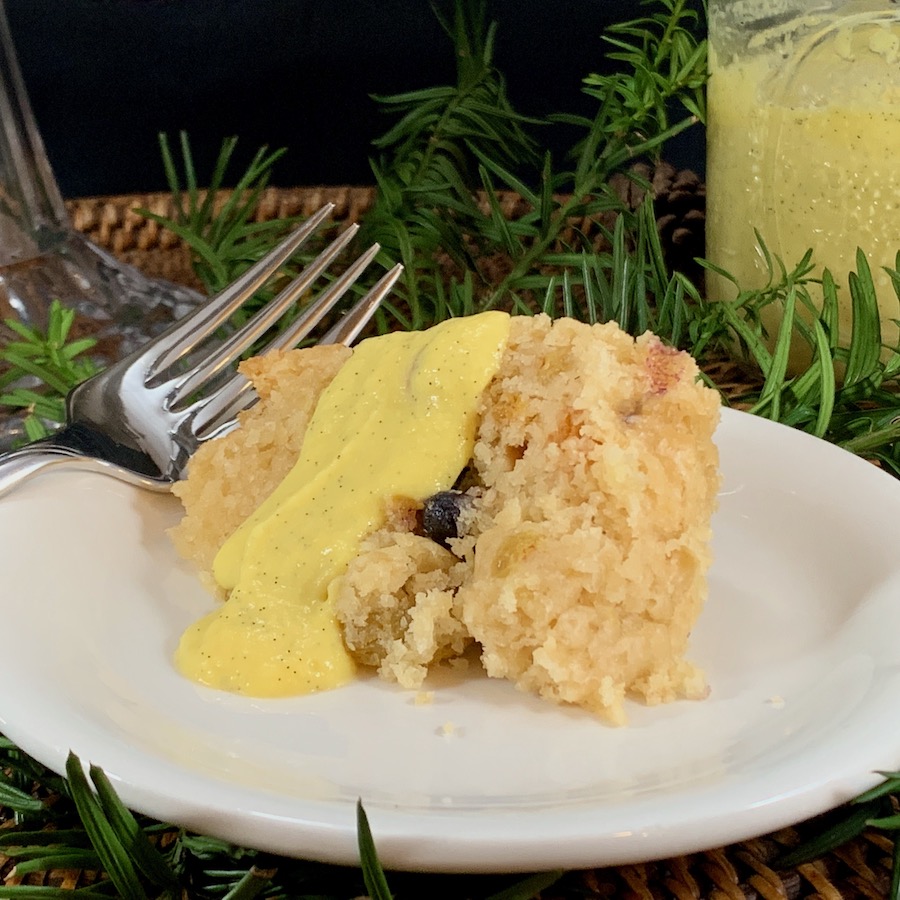 Having not known what to expect, I really enjoyed the combination of spotted dick with vanilla custard. The inclusion of lemon zest brightened up the whole dish, and the overall texture reminded me of a fruit-studded vanilla scone. To clarify, not flaky and crunchy, but soft and chewy (I hope that texture was correct… maybe some kind soul will let me know?).

Anyway, whether or not Claire (or her soon-to-be-revealed cook) made a true Christmas pudding or a December spotted dick, I hope you’ll try and make one. Let me know if it’s your first time or an old family tradition, and how you do it. Happy holidays to all!

Does your family have a traditional dish you serve at your holiday gatherings? 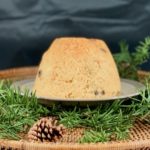 For the steamed pudding

Currants and sultanas (or raisins), along with candied citrus, are traditional in spotted dick, but you can substitute any dried fruit you'd like. I used a combination of dried cranberries and blueberries here. I use a microplane grater to zest the lemon. You'll notice the pure lemon flavor, not pieces of lemon rind (this isn't marmalade, after all). You can sometimes get suet from a butcher's counter. You have to render it yourself, then grate it; I did that for a more "authentic" experience. You can save time and trouble by just buying it already prepared... I won't judge. The amount of time it takes to finish steaming the pudding will depend. Suet takes longer to melt than butter (but it imparts a rich flavor that doesn't detract from the other ingredients), so factor that in when deciding which to use. I started checking after an hour, but it ended up taking 2-1/2 hours for my steamed sponge to be fully cooked. If serving later, reheat the pudding slices in microwave on short bursts. Top with custard before serving. Did you make this recipe? Please share your pictures with the world on your social media…tag @outlandercast (on Instagram and Twitter) and use the hashtag #howtheymadeitoutlander. I can’t wait to see your creations! 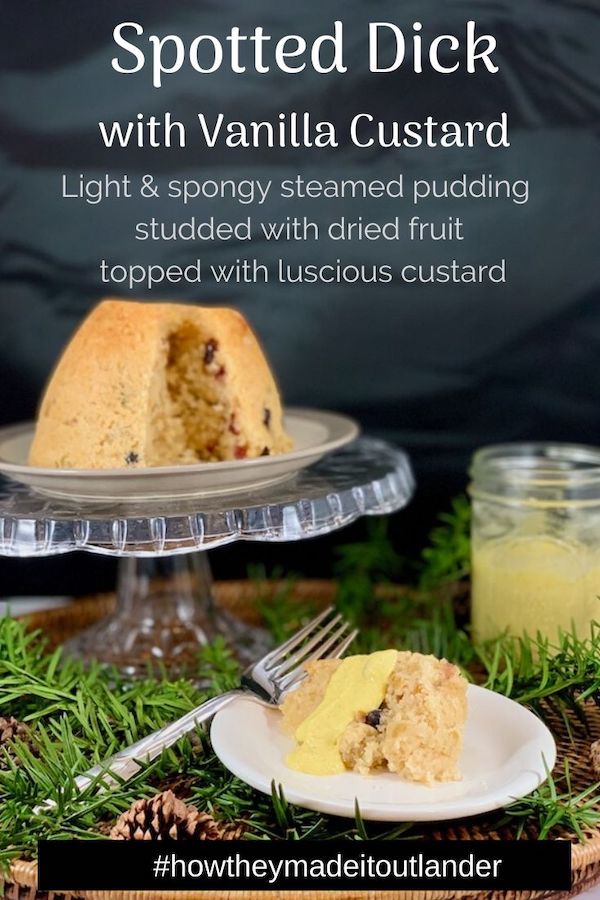